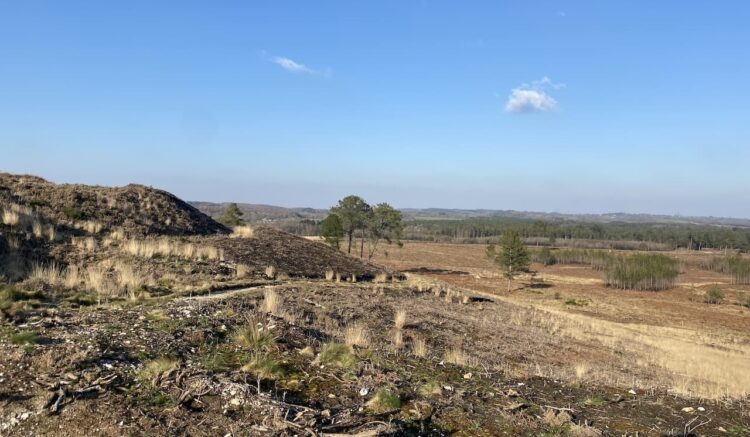 Following my solo trip in the new caravan a couple of weeks ago we are now both getting away for a few days to fully test out everything before we start our planned trips over the next six months. I have been busily organising our schedule which will see us visiting the Brecon Beacons, Northumberland, the Scottish Borders, Peak District and the Yorkshire Dales.

Our current trip is five nights at the Caravan and Motorhome Club main site at Hunter’s Moon in Wareham Forest.  We know this part of Dorset well because Lynnie grew up in the area and still has relatives living locally.  So it will be a good chance to do some walking and catch up with friends and family.

Wareham Forest is only just over forty miles from home, so a relatively short journey to reach Hunter’s Moon and it does not take long to get pitched up and sorted out.  Luckily there is still plenty of daylight for a decent walk.  We decide to head out from the site and exit through the main entrance and turn left along the road.  It is possible to walk along the verge, but we need to keep an eye out for fast moving traffic.  After passing the entrance to Birchwood Touring Park site we continue on a short distance and then turn right on a way-marked path for Woolsbarrow Hillfort.  There is also a marker for the St Edward’s Way on the finger post.

We now follow the fenced footpath heading north towards the caravans in Birchwood Park.

After passing the caravan site the path goes through a boggy area, fortunately it is easy enough to negotiate a route through without too much difficulty and then we cross a footbridge over a stream.

The ground becomes a bit firmer underfoot as we head towards a junction of paths besides two boundary stones at Old Ram, one of which is dated 1817.  In the past this was the crossing of major routes through Wareham Forest.

At this junction of paths we continue to head north on the Wareham Forest Way towards Woolsbarrow Fort.

The path heads steadily uphill to reach a crossing of paths with the Hardy Way, we continue straight on and after a couple of hundred metres fork left and continue through the ramparts of the hillfort.  Woolsbarrow is a late Bronze Age to Early Iron Age fort and although only 67 metres above sea level provides stunning views over the surrounding heathland.

On the ramparts there is an Ordnance Survey Trig Pillar, we have been here in the past but before I was bagging trigs so we wander over to add this one to my list. It is the 294th I’ve bagged.

From the hillfort we retrace our steps back down to the junction with The Hardy Way and head east across Morden Heath.

On 18 May 2020 a major fire broke out in Wareham Forest which burnt until the 29th May devastating 220 hectares of land.  150 firefighters fought the blaze and it is estimated that around 4 million litres of water were used to quell it.  However, this was not the only major fire to affect the woodland.  In 1947 a huge blaze went on for four days closing the road between Wareham and Bere Regis and causing ammunition left behind from World War II troop manoeuvres to explode.

At a junction of paths we leave The Hardy Way and keep heading east on a footpath leading towards Sherford Bridge.  This path skirts the edge of woodland and then goes through a field to reach the B3075 at Sherford Bridge.  We cross the road and join a track leading into woodland on Gore Heath.

There are a network of paths and tracks in these woods so plenty of options to choose.  Our route continues along the track for a couple of hundred metres and then we turn right to head south towards the summit of Gore Hill.  After crossing another track we continue south and then just before reaching another junction of tracks we follow a well-worn path that heads to the summit of Gore Hill and an Ordnance Survey trig pillar.  This one has been painted a bright green colour, which is a bit off putting to a trig purest but it still counts and goes down as my 295th bagged!

After going through the gate we head downhill on a path through gorse and heather towards a track.

On reaching the track we turn right on the route of the Poole Harbour Trail which is a network of circular and linear paths around Poole Harbour.  The track leads us through a gate besides the B3075 which we cross and continue on a track on the opposite side to reach a gate which we go through and then continue with good views across Decoy Heath.

The light is beginning to fade, but I am confident we will get back to the caravan before it gets dark, the track leads steadily downhill to reach a bridge over a stream at Morden Bog.

After passing the parking area and crossing the road we take the path opposite.  After a couple of hundred metres we turn right on a junction of paths and soon reach a crossing of paths where we go straight on along a fenced path with a solar farm to our right.

After crossing a raised walk way we soon reach a junction of paths where we turn right and head north back towards the caravan site on the route of the Wareham Forest Way and St Edward’s Way.  The St Edward’s Way is a thirty-mile route from Wareham to Shaftesbury Abbey.  The route is said to follow the journey that St Edward the Martyr’s remains were taken on after his murder at Corfe Castle in 972 to be buried at Shaftesbury Abbey.

Sections of this path are a bit muddy and it is just getting dark and we are relieved to reach a gate to re-enter the caravan site.  Unfortunately it is locked and we do not know the code to open it. (I later discover this is shown on the other side of the gate on the assumption that anyone leaving the park will want to come back through the gate, but it is not shown on any other information about the site!)  Instead we have to continue along the path, as it nears the road the route appears to head towards a quarry works service road, however, the secure gates leading to the site are now closed for the evening!

Clearly we now have a problem, but experience has taught me in such situations that it is best to take another good look at the map ensuring we have taken the right path and not just followed a path made by others.  Fortunately I spot that the footpath actually veered to the right just before reaching the service road so we take this much boggier route to reach the Wareham to Bere Regis road where we turn right and walk the short distance on the verge back to the entrance of Hunter’s Moon Caravan Park.

Our quick jaunt has covered just over 8.5 miles and has been a good stretch of the legs with the added bonus of two more trigs bagged.

You can view this 8.5 mile walk on OS Maps and download the GPX File Here