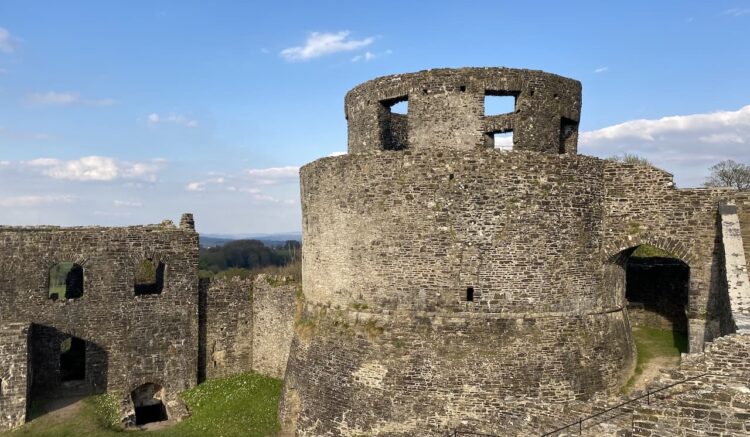 Over the last couple of years I have been developing my navigation skills and have completed the National Navigation Award Scheme Bronze and Silver awards under the expert tuition of Nigel from New Forest Navigation.  I was due to attend the Gold assessment in the Brecon Beacons  last October, however Covid restrictions meant that travel to Wales at that time was not permitted so the course was rescheduled for this coming weekend.

I will be out on the Brecon Beacons for three full days, so Lynnie and I have travelled down a few days early and plan to stay for a week after so that we can make the most of the trip.  We arrived yesterday and are staying a few nights at Abermarlais Caravan Park which is close to the village of Llangadog.  It is unusual for us to stay on commercial sites, but this one is small and has been highly recommended to us.  On arrival we had a warm greeting from the owners Tania and Steve and the facilities are excellent.

Today we are heading to nearby Llandeillo for our walk and park in a large pay and display car park in the centre of the town just off Crescent Road (SA19 6HN).  From the car park we walk down to Crescent Road and turn right opposite the fine Victoria Jubilee Civic Hall.

The road soon has fine views across the valley and then just after passing an old brick building on the left we follow a footpath sign directing us downhill towards a railway line.  After going under the railway we take a path on the left which runs alongside the track heading towards the River Towey.

The path leads to a suspension bridge, apparently built in 1911 to commemorate the Coronation of King George V.

We are on the route of the Heart of Wales Line Trail; this 143-mile long distance path starts in the town of Craven Arms and goes to the Millennium Coastal Park at Llanelli.  It visits twenty six of the thirty railway stations along its  way.

After crossing the river we follow a way-marked concrete path across a field and then a fenced path to a road.  Here we turn right and walk along Bethlehem Road to reach the entrance of Coed Tregib Nature Reserve. This 107 acre woodland reserve is maintained by the Woodland Trust and is said to have a wide variety of flora and fauna.

The trail is waymarked through the reserve and the route takes us in a south easterly direction, gradually ascending through the trees.

On reaching a minor road we turn left, still on the route of the Heart of Wales Line Trail.  This lane takes us past a sawmill at Cwmcîb and then goes over a stream.

We gradually ascend towards Llwyn-bedw and then as the lane turns towards farm buildings we take a footpath on the left following the Heart of Wales Line Trail across a field of pasture heading towards Hafod Farm.

After crossing a couple of arable fields the path joins a hedge lined track leading to the farm.

At the farmyard we turn to go in front of the farmhouse and join the farm driveway to a minor road where we turn right leaving the Heart of Wales Line route.  Soon in a field on our left we spot the Llwyn-bedw Ordnance Survey trig pillar and I pop over the fence to bag my 302nd trig.

We continue along the road enjoying the fine views, away to our left we spot the impressive Carreg Cennen Castle sitting on a rocky outcrop.  This was built in the 13th century by John Giffard, he was one of Edward I barons.  Like many castles in these parts it changed hands between the English and Welsh many times.

During the War of the Roses it was a garrison for the Lancastrian forces and was captured in 1462 by Yorkists under the command of Sir Roger Vaughan and his men then set about dismantling the castle.  It has been in a ruinous state ever since.

This is a well-marked route so easy to follow as it steadily descends across streams and through fields and copses to reach a minor road.

A Llandeilo resident named William Williams designed this single arched bridge; he was the county bridge surveyor. It was built between 1843 and 1848 replacing a three arch bridge which in turn replaced a medieval seven arch bridge that had collapsed in 1795. The single arch spans 143 feet across the river and at the time was the third largest span in Britain. Williams died in 1846 so never saw his bridge completed.

After crossing the bridge we turn left on a lane and pause to look back at the single arch structure.

We follow this lane and then go through a gate joining a fenced path into Dinefwr Park.

We stay with this pathway until reaching a turning on the left where we descend to reach St Tyfi’s Church.  This is the former parish church of Llandyfeisant, the current building was constructed in the second half of the 19th century and replaced an earlier medieval church. It is no longer used for religious purposes and is leased by the Wildlife Trust Wales as a visitors centre but it is currently closed whilst repairs are undertaken.

From the church we go through a gate and then turn right and immediately go through another gate and then follow a path heading west across pasture land in the park.  Dinefwr Park is an 800 acre estate owned by the National Trust and surrounds Dinefwr Castle and the stately home Newton House.

At a junction of pathways we turn left and head towards Castle Wood.

At the edge of the woods we turn right and follow a track through a gate continuing gradually upwards through the trees to reach Dinefwr Castle.

There was an earlier castle on this site which was rebuilt by Rhys ap Gruffydd the ruler of Deheubarth from 1155 to 1197.  After his death his son Rhys Gryg took over the castle and then it changed hands a few times before Rhys Fychan gave the castle to Maredudd ap Rhys who then gave it back to Rhys Fychan.  Maredudd joined forces with Edward I and his son Rhys ap Maredudd assisted Edward in the capture of the castle in 1277.  He expected to be rewarded with the gift of the castle but instead Edward I had him executed in 1291.

The English held the castle for a number of years and were unsuccessfully besieged by Owain Glyndwr in 1403.  At the end of the 15th century it was held by Sir Rhys ap Thomas, his grandson Rhys ap Gruffydd was executed for treason in 1531 and the castle confiscated by the crown before being returned to his family.

With the construction of Newton House in 1660 residency moved to the new house and the castle became a temporary residence before it burned down in the 18th century.

Leaving the castle we take a faint path heading north through the trees to reach a broader path and then join a wider path which goes through a gate and then continues downhill towards another gate.

The path now goes steadily uphill to pass National Trust buildings and goes through a car park to reach a tarmac lane that passes in front of Newton House.  Originally built in 1660 by Edward Rice it was changed to the current Venetian Gothic style in the 1850’s.  It was occupied until the mid 1970’s and then fell into disrepair before being acquired by the National Trust in 1987 and then restored.

We stick with the tarmac driveway to leave the park and reach Carmarthen Road where we turn right to head towards the centre of Llandeilo.  As the road sweeps to the left in front of a pub we continue downhill on the now narrower Carmarthen Road passing colourfully painted houses.

In the town centre we turn left and head back to our starting point in the main car park.  Our walk has covered almost eleven miles. Bagging a trig is always a bonus for me and Lynnie does like to visit a castle, the only downside as far she was concerned was the lack of an ice cream.