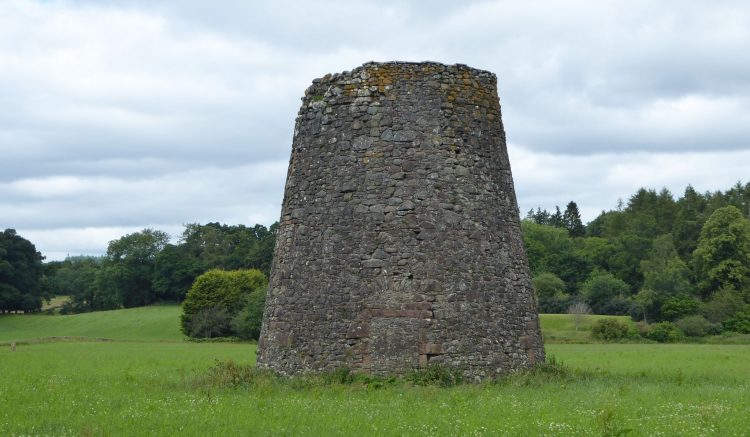 The weather is still a bit changeable, one minute it looks as if the sun might break through and turn it into a stunning day and then suddenly it looks like we might get a soaking.  There is a useful information folder at our current site, Landis Farm CL.  In it are some interesting leaflets published by Discover Kirkmahoe, a small local group, describing walks in the area. We opt to explore walks around nearby Duncow and Newlands (just the other side of Dumfries).

There are two walks in the guide starting from this point, we intend doing both.  We leave the school car park and walk into what remains of the village, crossing the bridge and carrying straight on, ignoring the turning on the left and gradually climbing a hill.  There is a walled, triangular area of woodland on the right; apparently cattle and sheep were rested here before being taken down the drove to Amisfield station and then to Lockerbie Market.

To our left in a field are the ruins of a windmill.  We turn left at the junction and stop to look at the windmill. 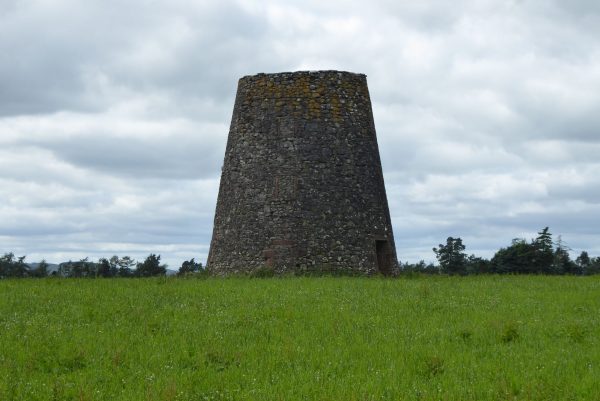 Also in the field to the right of the windmill is a Neolithic standing stone, there are a number of these dotted around this walk. 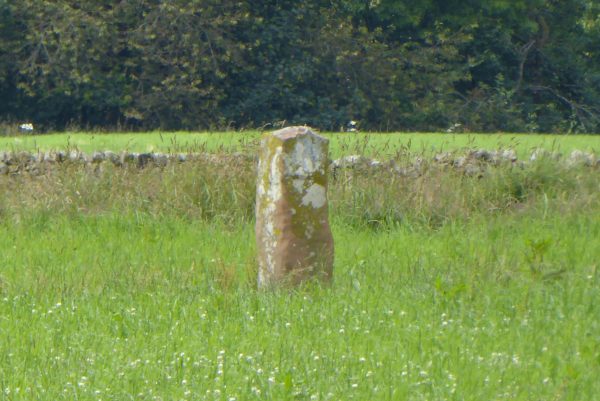 We continue along the road coming to the site of an Iron Age hill fort on our left at Castlehill.

A little further on we turn left at Knowefoot taking a path signed to North Riddingwood. 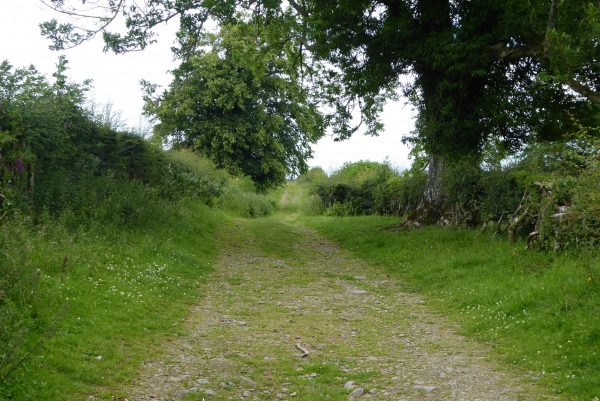 The track leads around to the ruins at North Riddingwood. 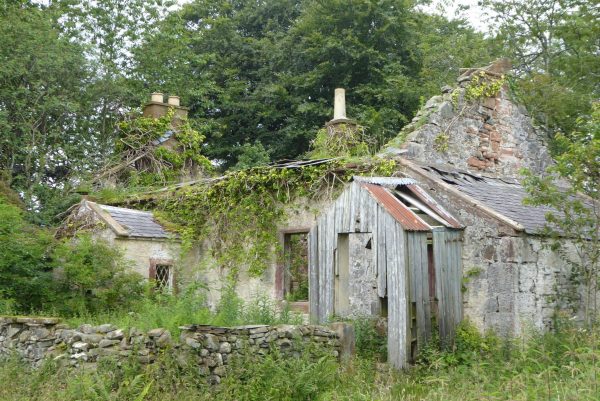 Here we turn left onto a tarmac track and head steadily downhill and after another lane joins from the right we reach a distinctive white house, this is Sunnybrae, it was the home and studio of the artist Cyril Wilson (1911-2003).  I had not previously heard of Wilson but later research shows that he was a distinguished artist and his works have been exhibited in the Royal Scottish Academy, the Galeria il Bisonte in Florence, the Smithsonian Institute in Washington, and many other places.

On the wall of the house is one of Wilson’s pieces “Child of Day in the Womb of Night”; it is not really a style of art I appreciate.  Wilson was also a water diviner and he became President of the Scottish Society of Dowsers in 1991 helping locate over three hundred wells in Scotland and Ibiza.  His obituary in the Scottish Herald tells how he was also interested in map dowsing, apparently he could swing a silver ball over a map and this would tell him all sorts.  He is said to have helped Scotland Yard find stolen gold bullion and assisted other police forces identify the location of a murder and find stolen jewellery. 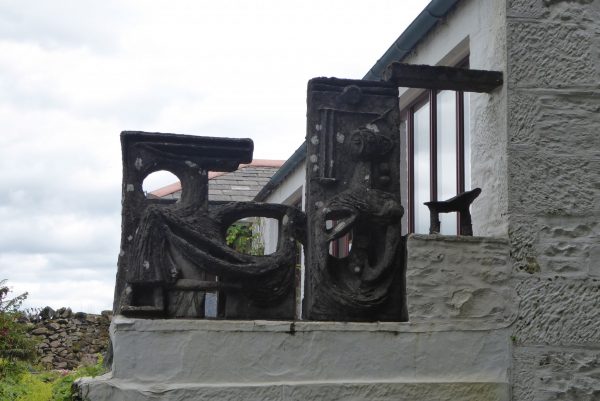 Continuing on down the road we pass Duncow Mill, we will pass this again on our second loop so will leave it until later to visit this interesting site.  We go through an area with an abundance of wild raspberries.  Dexter and Crosby love blackberries so I offer them a chance to taste a raspberry.  Immediately our progress is slowed as they seek out more of these ripe fruit. 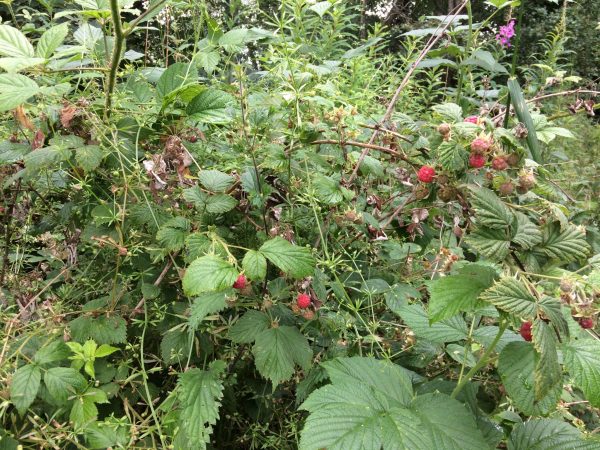 We have reached the point where we cross the bridge on our right and return back to the school car park.  On seeing the car Dexter thinks it must be of the end of the walk and time for a chew (a treat they always get when we end a long walk), so he is a bit disgruntled when we pass the car and turn right alongside the road for just short of half a mile.  After passing a house called Ryecroft, (Dexter still plodding), we turn right and follow the lane.

In amongst the hills to our right there used to be an area where Covenanters held their meetings out of sight. 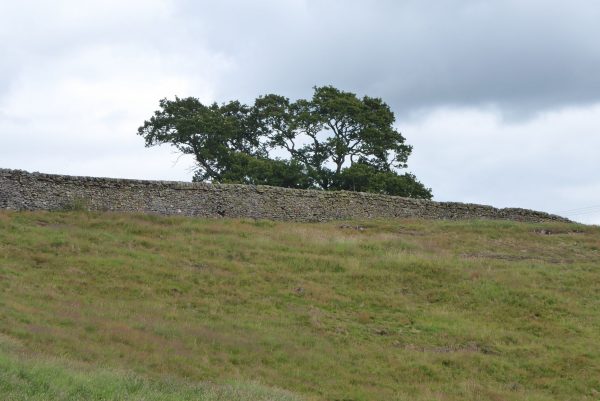 Then we see the fine looking Quarrelwood House.  This was built as a manse for the Cameronian sect, a religious fundamentalist element of the Presbyterians founded by Richard Cameron. This extreme group of Covenanters went on to establish the Reformed Presbyterian Church of Scotland.  (One of the many things I have discovered on this tour is that the religious structure in Scotland is extremely complex.) The octagonal building besides the house is on the footprint of the old chapel. 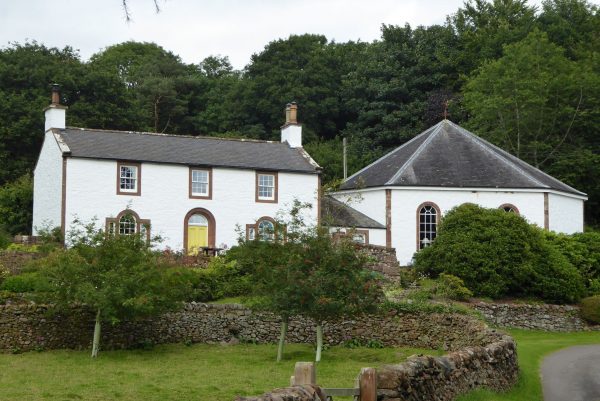 On our right the old stone wall has been built so as to create access for horses to get a drink from the stream. 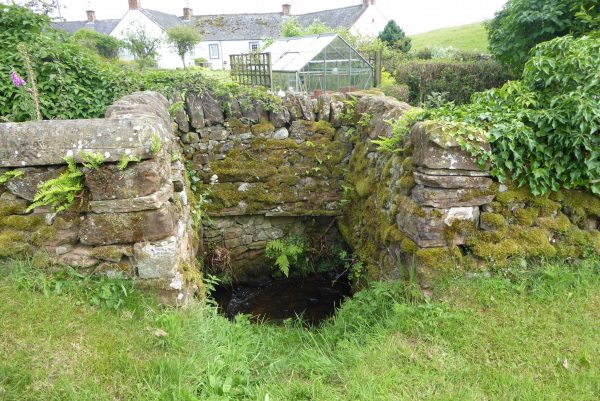 The track continues on past Longbank, we both seem to have acquired a cloud of flies that are persistently buzzing around our heads, not a couple of flies but hundreds, soon this become very tiresome.  We have now reached Newlands.  Walter Duncan a Glasgow tea merchant purchased this house in 1891 and besides extending the property he added some castellation.  The Scottish do love a bit of castellation! 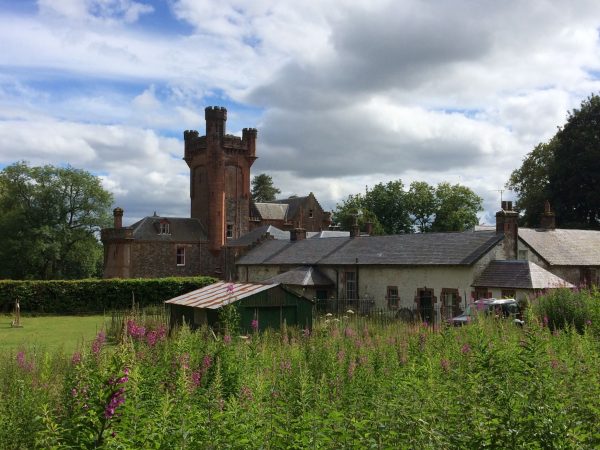 During World War II Newlands House became a hospital for the Norwegian soldiers who were located in Dumfries after the German occupation of Norway.   Duncan’s tea business still exists, these days it is part of the Duncan Goenka Group and has more than 40,000 employees worldwide.

On reaching a junction we turn right, still accompanied by our increasing clouds of flies, we soon pass Leap House, apparently in the woods to our right is the site of an old distillery and a folly. However, with no obvious path and surrounded by our individual, irritating, clouds of flies buzzing around us we decide to press on rather than explore.

We soon reach Sunnybrae again and once again head down the hill towards Duncow Mill.  Mercifully we have shaken off the flies so stop to explore the mill.

This was once a large complex, having five main mill buildings.  These included a grain mill a carding mill and a wool mill. 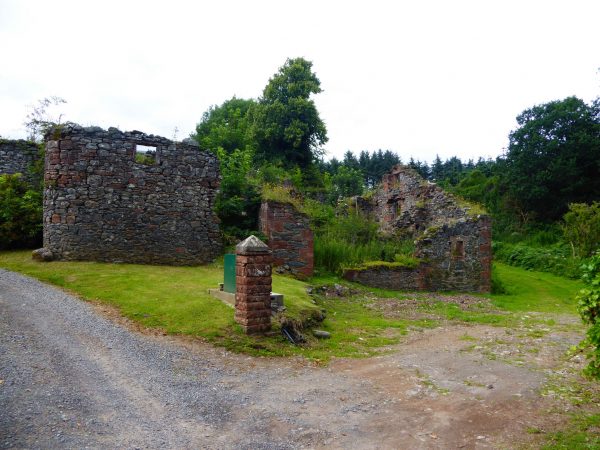 The carding mill was where the woollen fleeces were cleaned, separated and straightened before being woven into blankets.  Apparently, teasels were grown here for use in carding the wool.

Returning to the road we head back down the hill, with Dexter and Crosby alert for the possibility of a raspberry or two.  We cross the bridge and return to the car.  Our little wander has covered close to seven miles in total, with the first loop being three miles.  It has been interesting to learn about the history of this area, but the walk was spoilt by the bothersome flies. 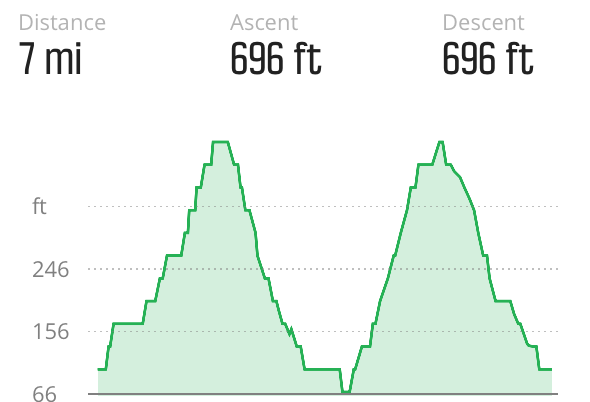