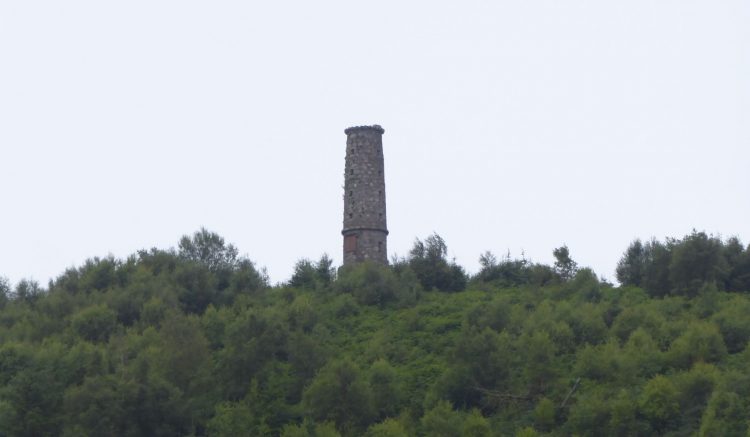 It’s an overcast day but it is forecast to stay dry.  After our trip in the car yesterday I am keen to find a walk starting from Landis Farm CL.  There look to be a few options and my preference is to go with no set route and just jamabout.  Over the years we have found that taking this approach is far more enjoyable than trying to follow a designated route from a walking guide.  All it takes is an OS map and a sense of adventure.

We leave Landis Farm CL on the footpath heading southeast across the farm’s fields.  Approaching the far hedge of the first field we turn back to look at Abbot’s Tower.  It is amazing that this tower is just the other side of the hedge from our pitch on Landis Farm, yet we had no idea that it was such a splendid building. 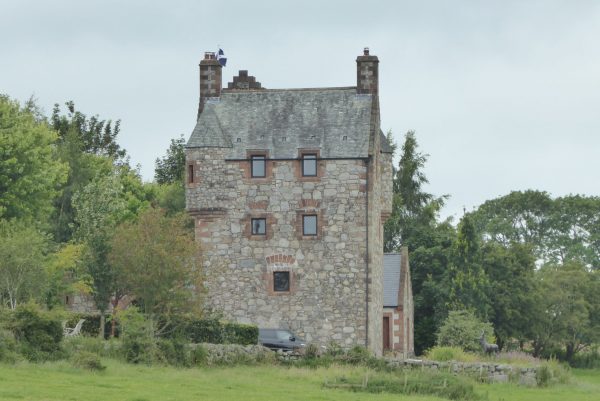 In the 16th century Cuthbert Brown built a stone structure here. His brother John was the Abbot of Sweetheart Abbey and sold him the land in 1541.  Cuthbert’s son, John, built the tower in the 1580’s and it apparently fell into disuse after the family sold it on in 1627.  In the 1990’s it was taken on as a restoration project and is said to now be a fine house both inside and out.

We follow the footpath sign across another field and at the far side of the third field turn left to follow the way-markers alongside the hedge.  As we near the corner of the field the footpath heads right over a footbridge. 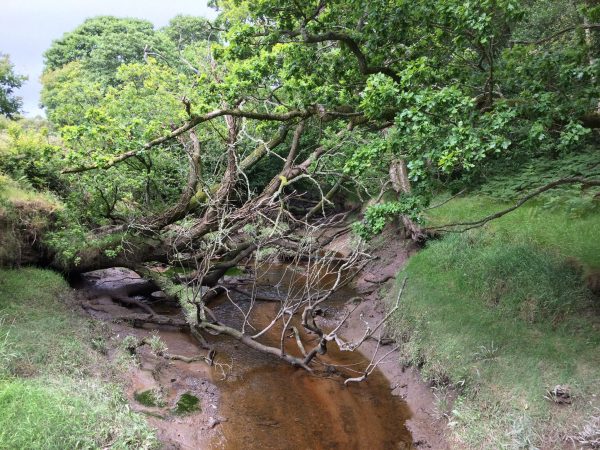 Then the path continues on through woodland with the tidal stream to our right.  We soon emerge into fields and follow the way-markers across fields.  After the first field the stream we are following joins the New Abbey Pow and the path roughly follows the river as it heads to the Nith estuary. 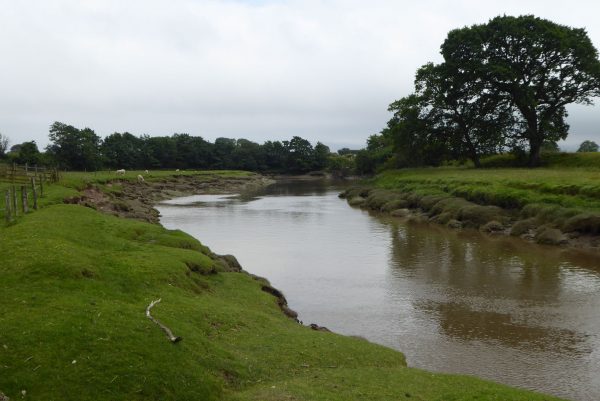 After a couple of fields the path takes us into Airds Merse and we follow the well-defined path through the trees towards Airds Point. 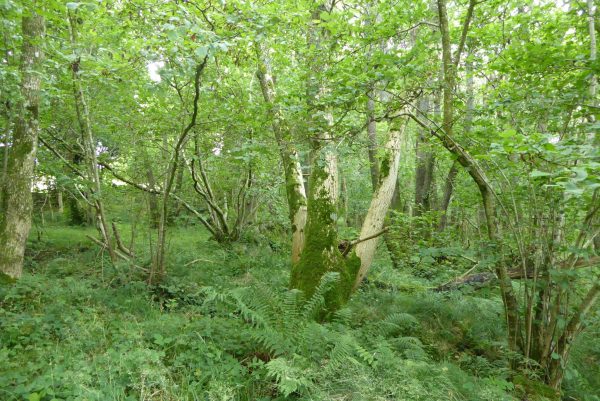 At Airds Point we are greeted with fine views across the estuary. 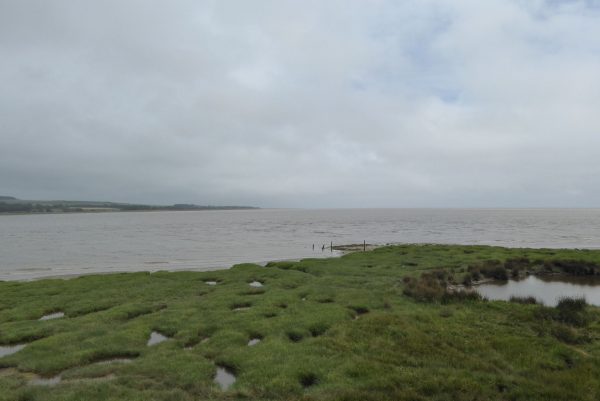 The path skirts the fence of the sewage works and turning the corner we get great views back up the Nith Estuary over the nature reserve of Kirkconnell Merse. 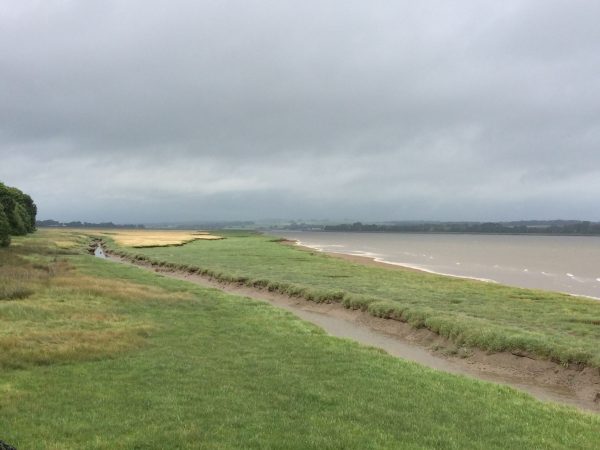 The path now joins a well-made track leading away from the sewage works. Either side of the track the hedgerow is full of blackberries and hazel nuts, neither of which are ripe, much to Dexter’s disappointment.  However, he and Crosby soon locate wild raspberries and are happy to grab at these as they walk on licking their lips.

Being a country boy I was always told that a heavy crop of nuts and berries meant we were in for a hard winter.  Lynnie pooh poohs this and says such an abundance is the result of ideal growing conditions in the spring and summer.  Time will tell who is right, but regardless, just to be on the safe side, I will be stocking up with provisions before the snow falls!

The track continues towards Kirkconnell Mains, soon we can see Glencaple across the river. 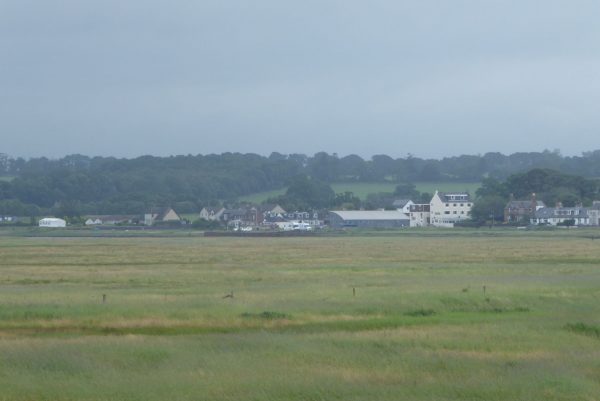 On reaching a junction we turn left and soon pass Kirkconnell House.  The tower is believed to date from the 12th century but the name originates from around 1430 when Janet de Kirkconnell married Aymer Maxwell of Caerlaverock Castle.  The house is said to have been in the Maxwell family for around 800 years until 2001.  In 1750 James Maxwell returned from France, having fled there with Bonnie Prince Charlie.  He returned with French brick builders and they set about reconstructing the house alongside the tower this is reported to be the first brick built house in Scotland. 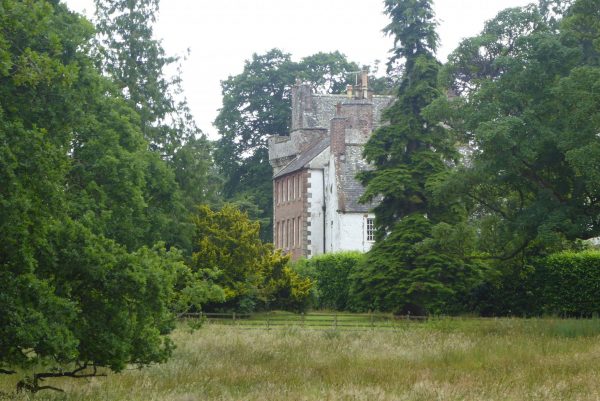 We now continue along the lane for just over a mile to a junction of roads, by turning left we can return to Landis Farm CL.  When we set off we had thought to walk up to the Waterloo Monument, it had looked like rain was imminent so I have been lugging around our waterproofs.  Now the weather is settled we decide to continue via the Coachman and ditch the rucksack along with some layers.

Returning to the caravan confuses the dogs.  Dexter is convinced that his walking duties are done for the day whilst Crosby feels a bit short-changed.  So they display mixed reactions when we start off again.

The second section of our walk begins by heading down the lane from Landis Farm to New Abbey; a now familiar route crossing the New Abbey Pow, entering a field to turn left to follow the footpath besides the playing field to the main road then turning right into town.

At the Abbey Arms we take the road that forks left past the pub.  Very soon we reach the millpond and turn left to head up a tarmac lane. 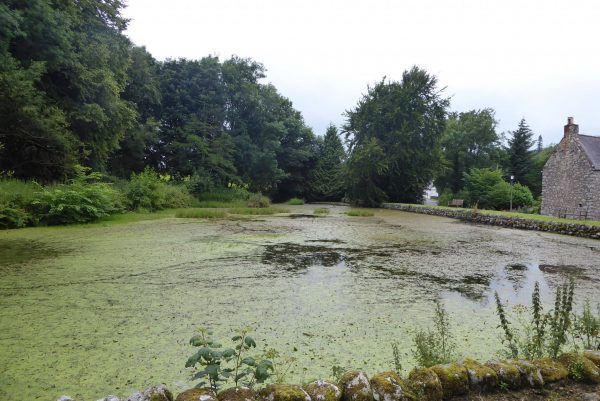 We continue on this road around a couple of bends and see our intended destination, the Waterloo Monument.  After passing the small car park we carry straight on following the way-markers to the Monument.  The path soon climbs uphill, helpfully there are steps and this is clearly a well-trodden path. 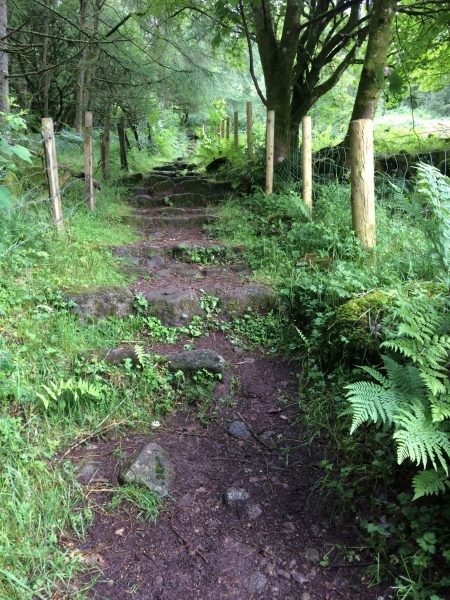 Very quickly we start to climb in earnest.  It is now a warm afternoon and without any breeze this ferocious ascent is warm work.  Fortunately there are views to be appreciated so we get a bit of respite! 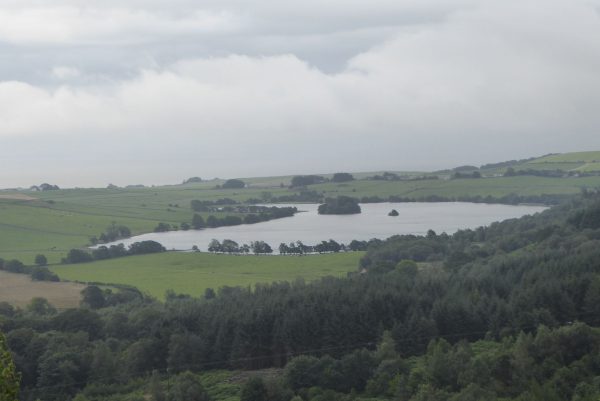 The path winds its way through bracken and undergrowth and we keep thinking the summit will be around the corner.  Finally we reach the top where the cool breeze is very welcome. 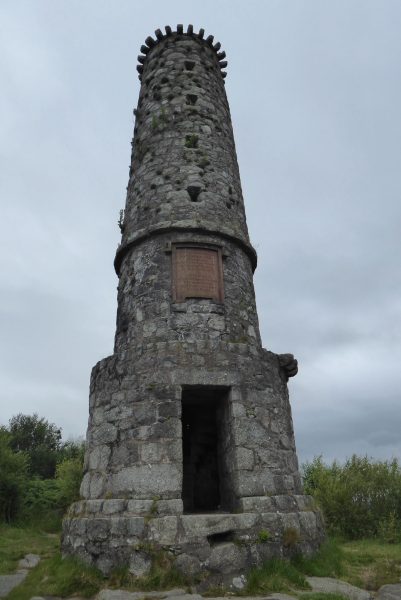 The monument was erected in 1816 on top of Glen Hill now known as Waterloo Hill (603 feet above sea level). The monument stands at 65 feet high and has an internal staircase that Lynnie starts to ascend, but soon decides is too hazardous.  Apparently when you reach the top there is no balustrade so for the brave (or foolhardy) caution is advised.

Whilst Lynnie ventures up I read the inscription “To record the valour of those British, Belgian and Prussian soldiers who under Wellington and Blucher on the 18th June 1815 gained the victory of Waterloo by which French tyranny was overthrown and peace restored to the world.”  If only the last five words of this inscription were true today.

Our generation was born in the mid/late 1950’s, whilst the world has seen many conflicts, in our lifetime we have been fortunate to live in relative security.  We would all hope that the same could be said for our children’s generation.  However, news bulletins suggest that we are heading for difficult times with potentially apocalyptic outcomes.  A sobering thought when you stand in a place of such beauty, why would anyone want to destroy this wonderful planet, all for the sake of power. 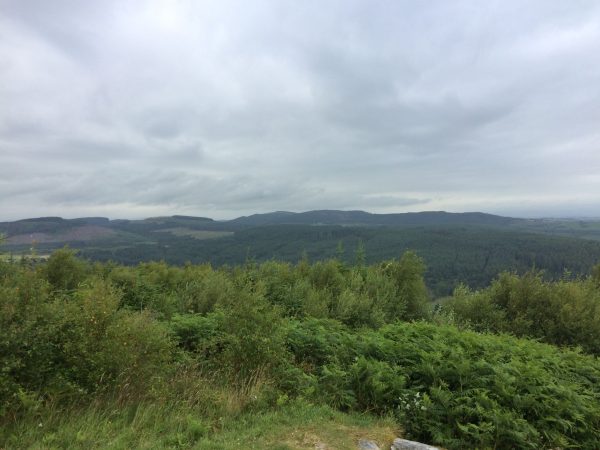 There are a few paths providing routes off of the summit so care is needed to get the right track.  The one we take is to the West which initially looks like a faint track as it heads through bracken, but becomes more obvious as it swings more to the north and starts to descend.

This downward route is not as steep as the one going up and the way-markers are clear as we enter woodland to follow a well-defined path. 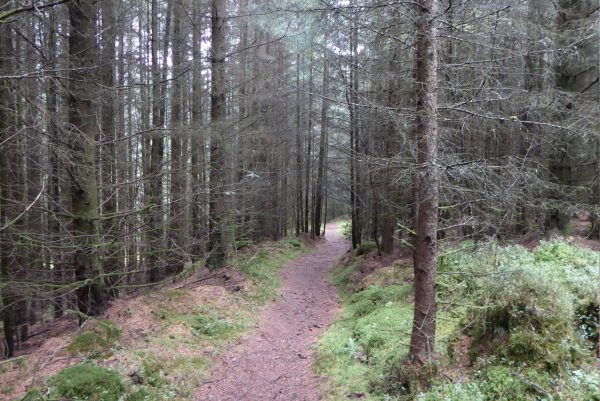 Leaving the trees we reach a track and turn right to follow this back into New Abbey passing Townhead Sawmills along the way.  The sawmill is operated by James Kingan and Sons; this family business started in 1860 and is now in it’s fifth generation.

We arrive in New Abbey by the millpond and from here retrace our steps through the village back to Landis Farm CL.  In total we have walked over nine miles, with the first loop accounting for around five miles.  It has been a cracking afternoon for a jamabout!