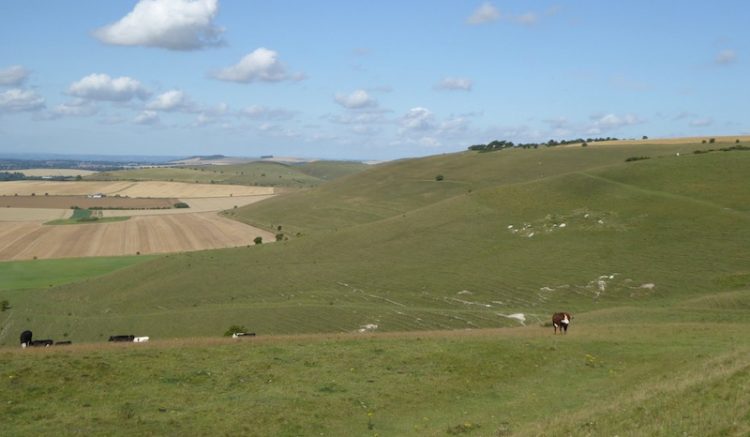 Earlier in the year with three friends, Mandy, Glenda and Ged, I walked the Clarendon Way, the 27-mile route between Winchester Cathedral and Salisbury Cathedral it was a cracking day and the four of us vowed to do another long distance walk together when our diaries permitted.  Today we are heading out again to tackle the Sarsens Trail, a 26-mile route between the stone circles at Avebury and Stonehenge.

We are fortunate to be dropped off in Avebury in the National Trust car park and make our way through the village to join the start of the Sarsen Trail near the Red Lion Pub. 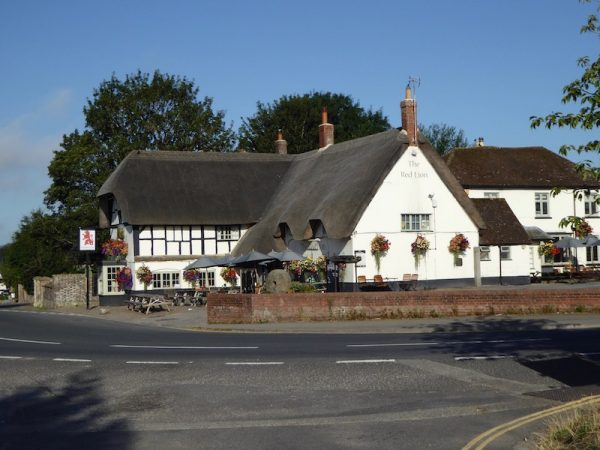 Our route out of Avebury is in an easterly direction following the route of the Wessex Ridgeway.  Going through the village we pass some of the standing stones that make the village famous. 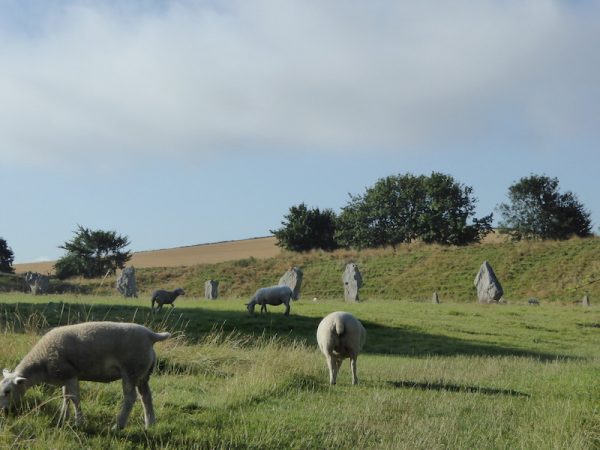 The stone circles at Avebury are said to be part of a Neolithic site dating between 2580BC and 2200BC and are part of a much wider network of standing stones in the area.  I have not been here for many years, it is well worth a return visit, but today we have no time for sight-seeing we have over 26 miles to walk before the end of the day.

After passing Manor Farm we leave the Wessex Ridgeway path and turn right along a track that soon ascends gradually up a chalk escarpment.  As we head uphill we get our first stunning view of the day. 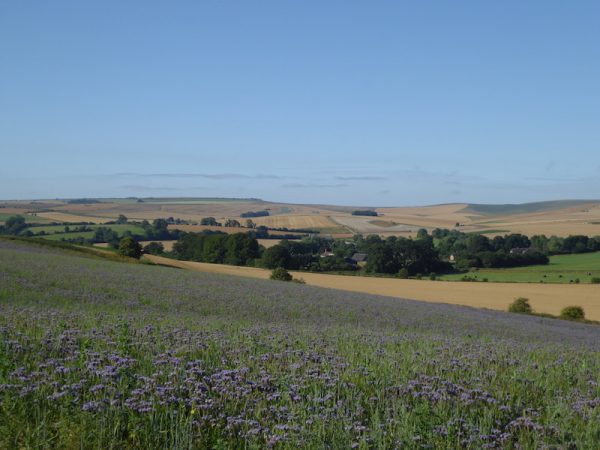 At a junction of paths we turn right to join the Ridgeway.  I have previously walked sections of this long distance National Trail that covers 87-miles between Overton Hill and Ivinghoe Beacon in Buckinghamshire.  It is not long before we reach its start point at Overton Hill. 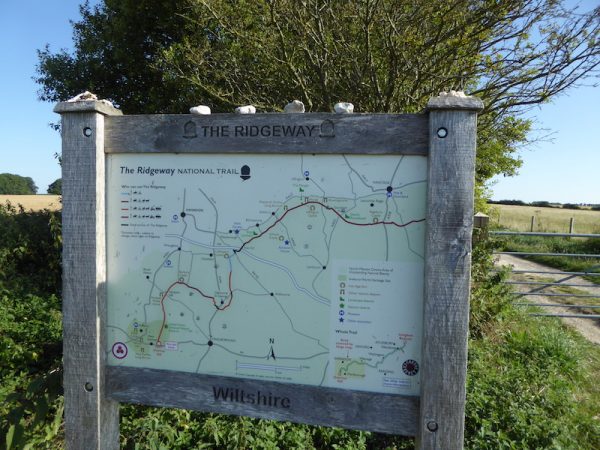 After crossing the A4 we continue on the drove towards East Kennett.  After a short road section through the village we take a lane on the right and the fork left to take a drove heading up onto Cow Down.  From here we get a good view of Silbury Hill, this is said to be the largest prehistoric man made mound in Europe and there has been much debate regarding its purpose, but apparently it was not a burial mound. 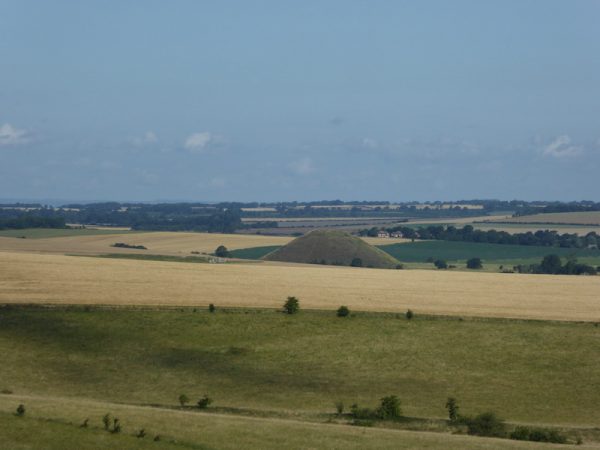 We keep on the drove, ignoring paths off to our left and right as we head towards Knapp Hill.  As we approach a minor road and Knapp Hill car park we turn to the right on a permissive path on the Mid Wilts Way.  This path leads us to the Access land of Walkers Hill. 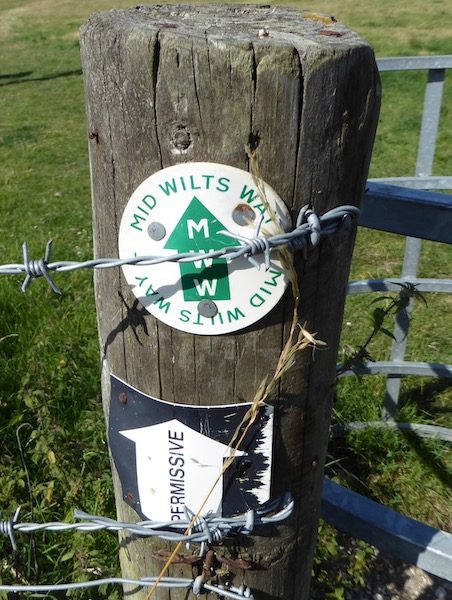 It is a steady ascent up Walkers Hill to the Neolithic long barrow called Adam’s Grave.  The views from this spot are really cracking. 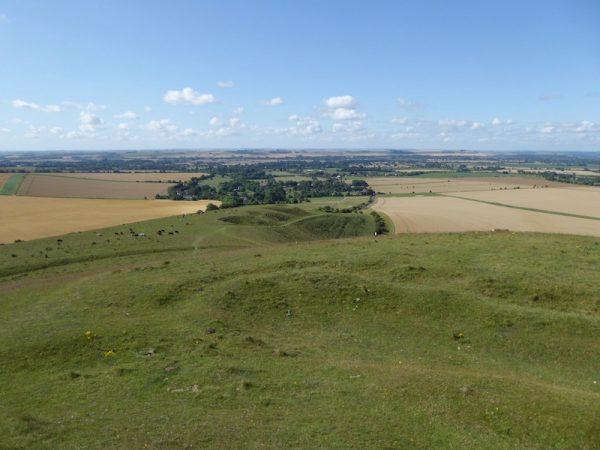 Walking down towards Alton Barnes we get a good view to our right of the Alton Barnes White Horse.  This is one of eight remaining Wiltshire White Horses; it was cut in 1812 and is an impressive sight. 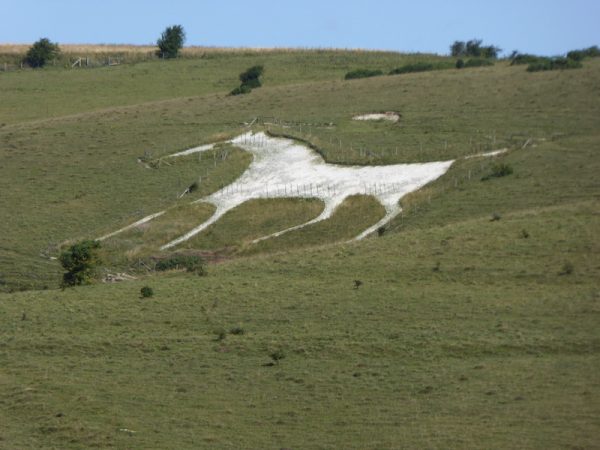 We head into Alton Barnes and take a paved footpath across a field towards the Saxon church of St Mary the Virgin.  The church is closed, but a workman arrives and allows us a quick peak inside, major renovations are on going so it is difficult to fully appreciate the beauty of this small place of worship. 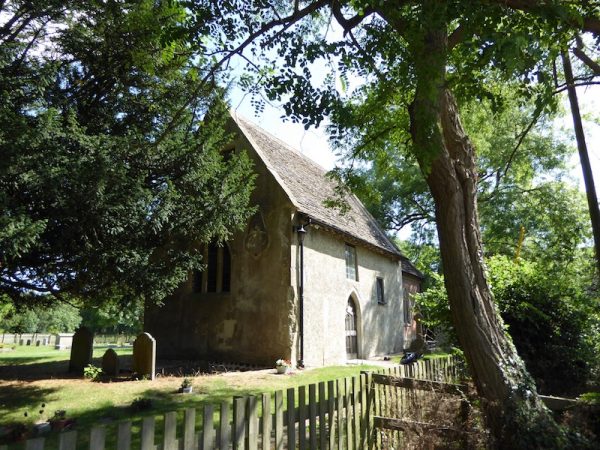 Leaving the church we follow the track up to a minor road and turn left to walk through the delightfully named hamlet of Honeystreet.  After crossing the Kennet and Avon Canal we take a footpath to join the canal towpath and head east. 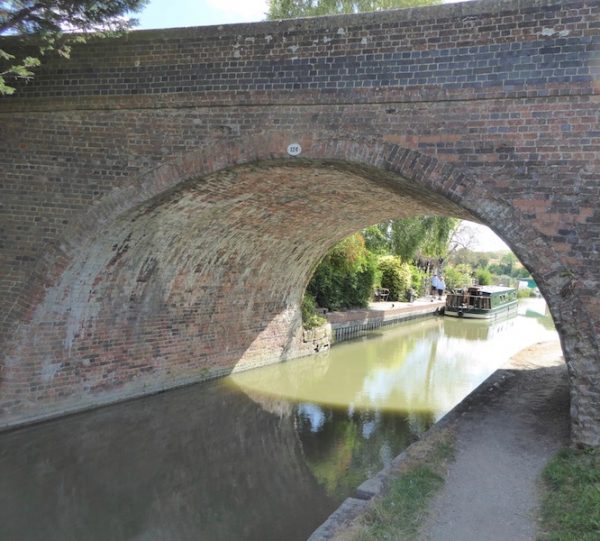 We are only on the canal towpath for a short while, leaving at the next bridge to take a path that heads to the right into the village of Woodborough.  In the village an elderly chap taking his daily constitutional gives us advice on the best path to Bottlesford.  So at a junction we turn right and then take a rather overgrown footpath on the left taking us over the railway line. 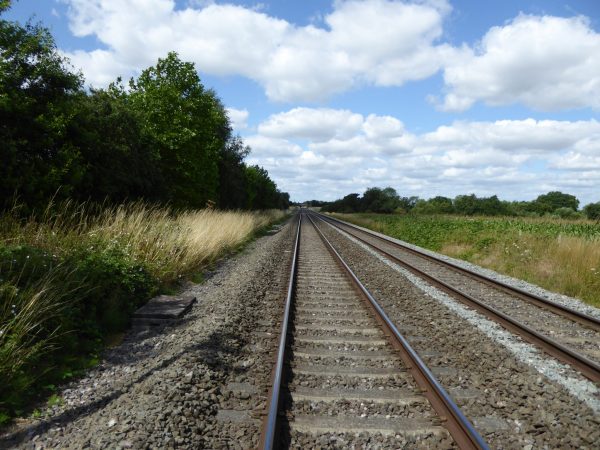 Emerging in Bottlesford close to the Seven Stars pub we turn right along a lane. 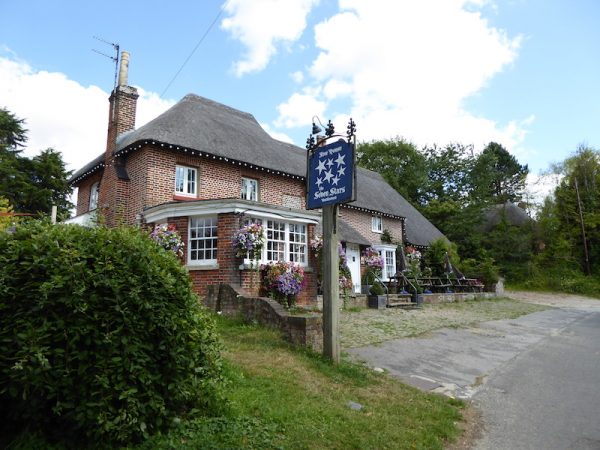 After a few hundred yards on the road we take a left turn to follow a track between fields.  The crop has been harvested in the traditional way, the wheat has been cut with a binder and the sheaves have been stooked.  As a teenager and into my twenties I spent time during the summer helping a local farmer who harvested in this way. 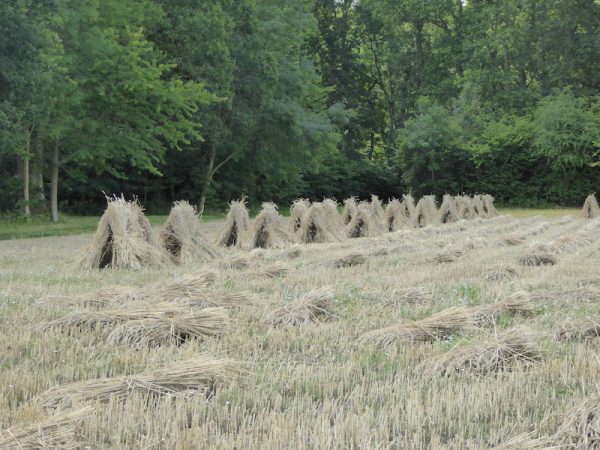 We join a minor road and turn left then almost immediately take a right turn onto a footpath leading to a track.  At a junction we turn left and at the end of this track we turn right.  On reaching the White Horse Trail we turn right but then within a hundred yards turn right again on a track heading towards Cuttenham Farm.  At the end of this track we turn left following a path to the A342 Devizes Road.  After crossing the road we carry straight on, the path now starts the long steady ascent up to the downs. 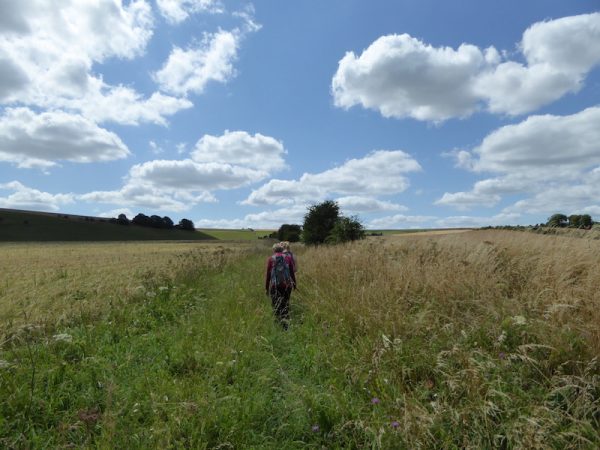 From the top of the hill we get a cracking view of the route we have taken. 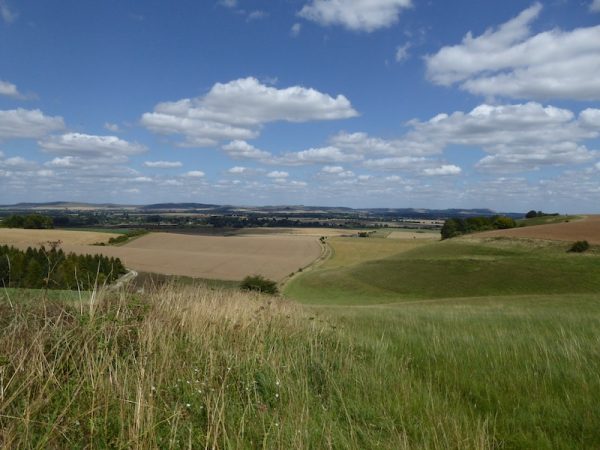 At a junction of tracks we turn left and follow the route close to the edge of the restricted access land of Salisbury Plain. 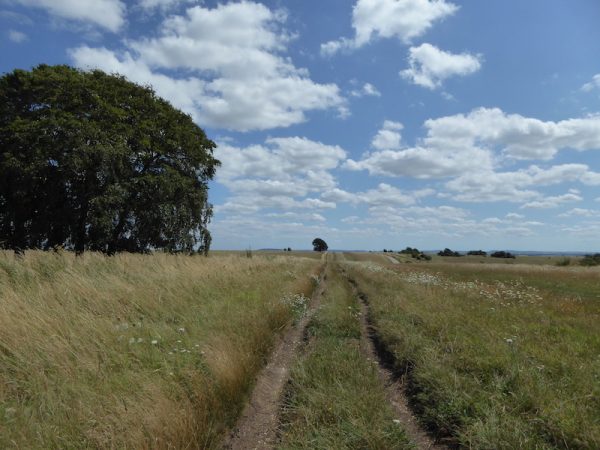 At a junction of tracks we turn left to make a slight diversion to “bag” the trig point at Charlton Clumps, this is my 154thtrig pillar. 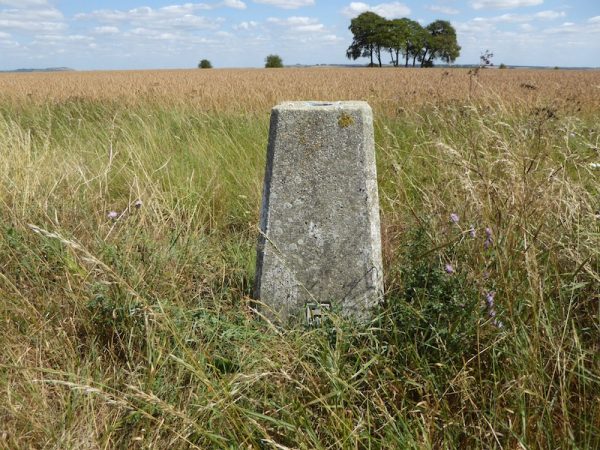 Returning to the main track we turn left and stay with the track as it runs besides the MOD land.  There are a few paths leading off to the left, we ignore all of these until we reach a turning heading towards West Chisenbury Farm. 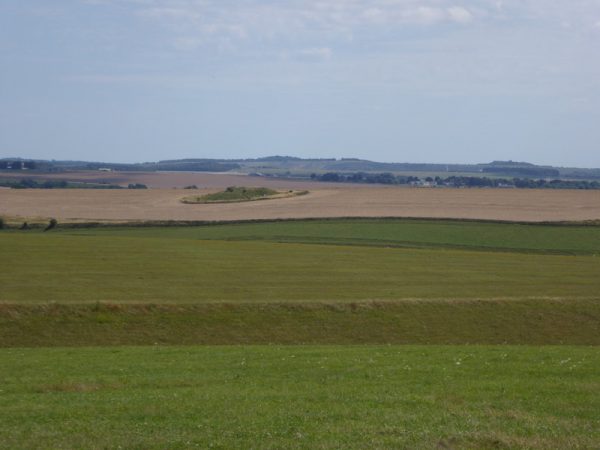 It has been a warm sunny day so we sit in the shade of a small copse to have our lunch.  Resuming our walk we continue towards West Chisenbury Farm and then take a footpath on the right leading downhill to Compton Farm.

As we go through Compton Farm some workmen point us to the correct path and then we see the first way-markers for the Great Stones Way. 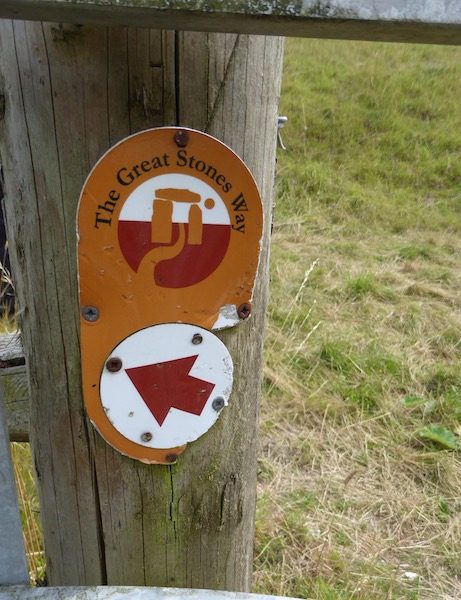 We follow way-markers across a couple of fields and then turn left to head downhill and cross the A345 before continuing along a lane into the attractive village of Enford.  After crossing the River Avon we turn right to pass the Swan pub. 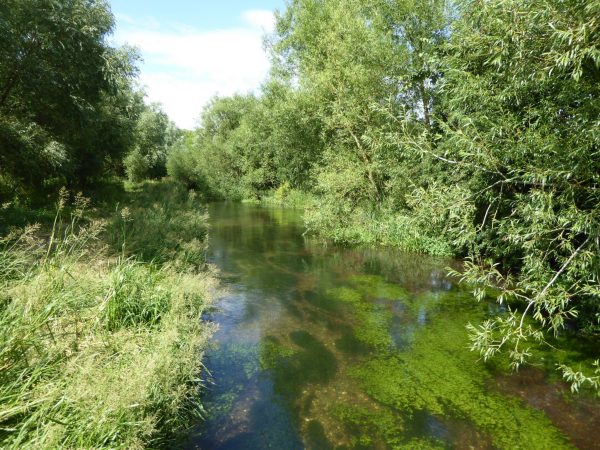 We stay on the road through Longstreet, at a junction we turn right to head down a lane towards Fifield.  In the hamlet of Fifield we take a footpath on the left leading across fields to reach Netheravon. Here we pass the Stonehenge Brewery which is based in the Old Mill.

According the brewery’s website the mill was originally built in 1914 to provide power to the nearby airfield, however, it was never able to generate sufficient power so soon became surplus to requirements.  It then took on various guises, including being the village hall before being converted into a brewery and starting to produce beer in 1984.  Originally Bunces Brewery it became Stonehenge Brewery when the current owners took it over in 1993. I have not drunk many of their beers, but I am partial to a pint of their Pigswill. 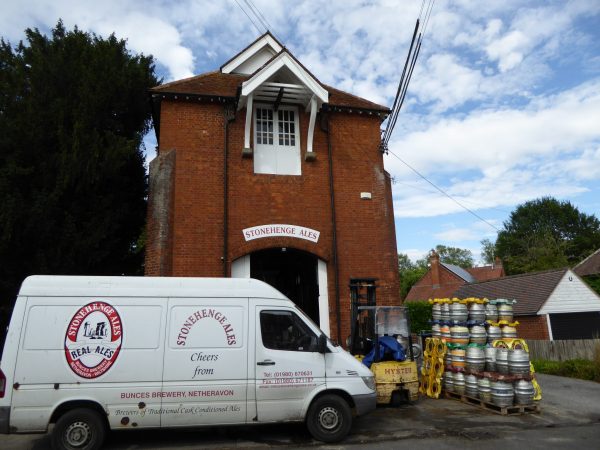 We continue along Mill Road and then turn right into the High Street and follow this to a T-junction where we turn left towards Choulston Farm. Near the farm we take a footpath over a stile to cross fields. On reaching a road we turn right and follow this steadily uphill towards Figheldean.  Nearing the village we take a track on the left that soon passes allotments to reach the Village Hall and recreation ground.  We take a path through the village hall car park and then across fields where the harvest is underway. 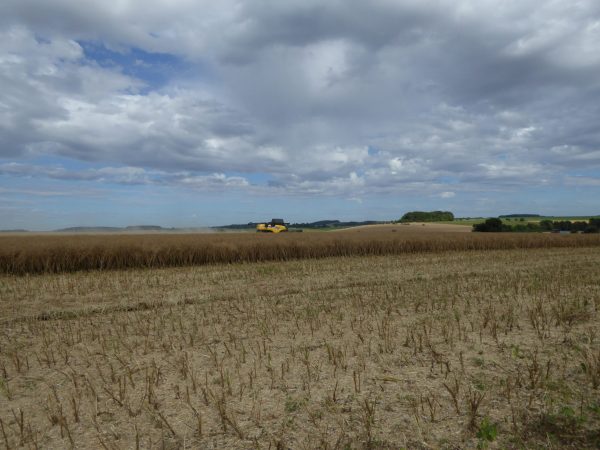 Our route continues in a straight line through Ablington and then across more fields.  Along the way we see tank manoeuvres. 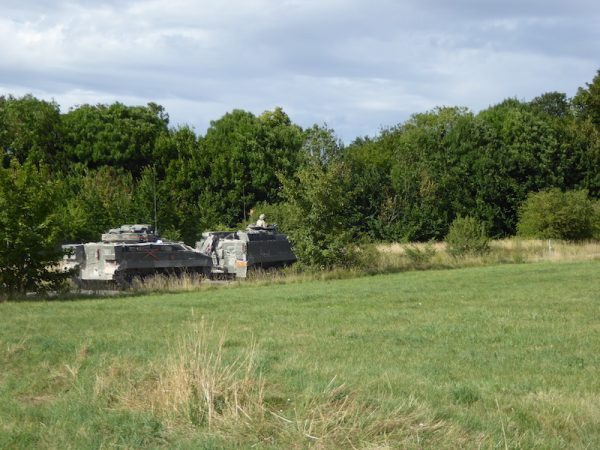 On reaching a minor road at Brigmerston we turn right and follow this through the village.  As the road turns sharp to the left we carry straight on a path that leads besides a cottage.  The route in not obviously marked on the ground, but we check with someone in the cottage who confirms it is the footpath.  It always surprises me when people have paths crossing their gardens and they do not mark them clearly.

Our route is now across fields, some cattle are initially interested in us but soon realise we offer no threat so leave us alone.  After crossing the River Avon we reach a road and turn left to walk into Durrington. 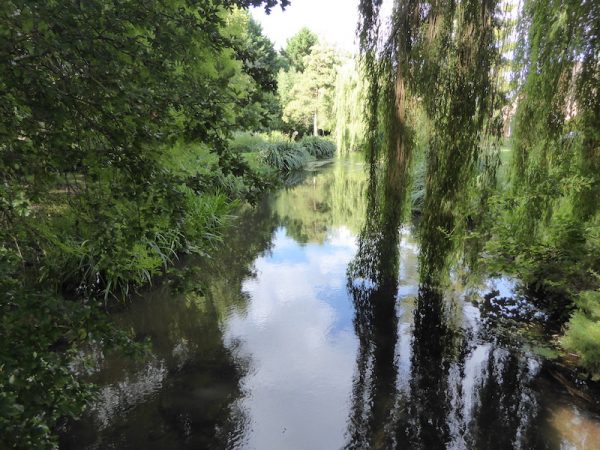 At the triangle housing the War Memorial we turn right and walk through the village along the High Street.  After stopping at the small store for an ice cream we continue right as the road forks.  Now on Stonehenge Road we head uphill to reach the Stonehenge pub. 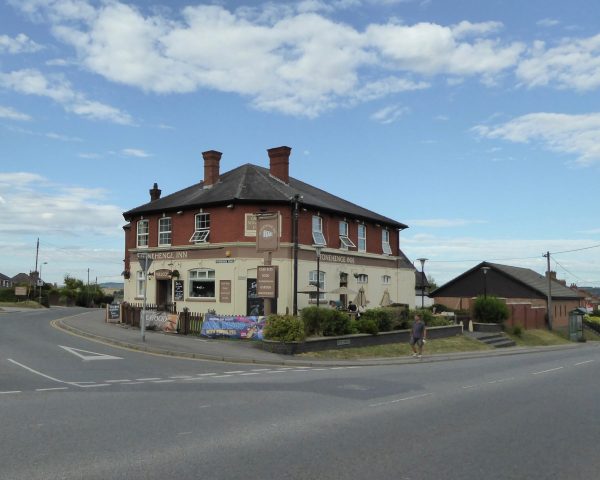 Here we turn left to walk a short section alongside the A345.  After a couple of hundred yards we cross the road and join a footpath opposite leading to the site of Woodhenge.  This Neolithic site, much lesser known than its near neighbour Stonehenge, was a wood circle, which is thought to have supported a raised structure.  According to English Heritage it was built around 2300BC and there is evidence of its use in 1800BC.

It is nearly forty years since I was last here, I recall then it was a well-kept secret and not much seems to have changed.  There is only one other couple here. 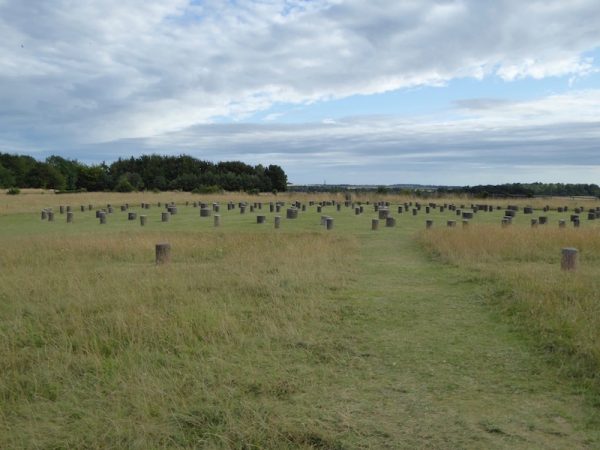 We now cross the access land heading towards Stonehenge and then briefly join the route of the disused railway line.  This was the Larkhill branch line of the Amesbury Military Light Railway and was constructed during World War I to connect the military base at Larkhill with main line services.  Glenda who knows this area well, her husband farms this land, explains that the apple trees lining the disused railway are said to have grown from the apple cores thrown out of the windows by troops on the trains.

After a spell besides the route of the railway we reach more access land, which we cross heading towards Stonehenge.  As we walk Glenda’s husband Billy arrives with his Landrover and trailer ready to collect us when we have reached our destination. 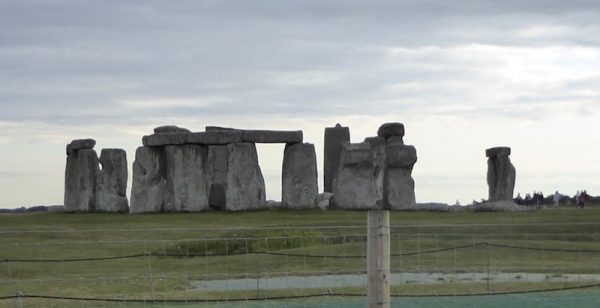 Finally after just over 26 miles of walking we reach the end of our route at Stonehenge.  It has been a cracking day’s walking and we are all ready to adjourn to Billy’s yard for an excellent barbeque and some refreshing beers. 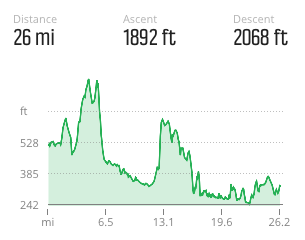