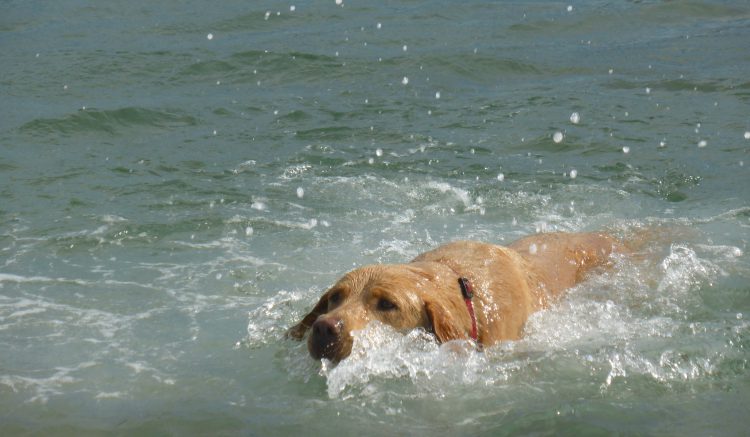 One thing there is no shortage of in this area are castles. One that dominates the landscape is Bamburgh Castle, we drove by it the other day on our way to Low Newton and it was a prominent feature of our walk to Holy Island. Another sunny day so we decide to go to the seaside.

We park in Bamburgh and walk towards the Castle passing the cricket ground to our left. On our travels I have seen a number of cricket pitches but none located in a more scenic spot than this. The walls of the Castle loom over the ground and it is set in a bowl, it makes me keen to hunt out my “whites” and resume my career.

We leave Bamburgh village on St Oswald’s Way, our first field has bears on the far side but they show no interest in us so we proceed confidently. Through a couple of gates by cottages and then we cross open fields. Our path reaches a gate to a field of bears, many right on the track. They show considerable interest in the dogs, too much for us to feel comfortable, so we consult the map and take a path that leads us by Greenhill Farm.

On reaching the road we cross and enter the dunes and follow the path down to the beach. As we approach the beach there is a stunning view of the Farne Island lighthouse through the dunes. The tide is out and the beach is vast, there is hardly a soul about. Plenty of space for the dogs to run about, they love being on the sand. 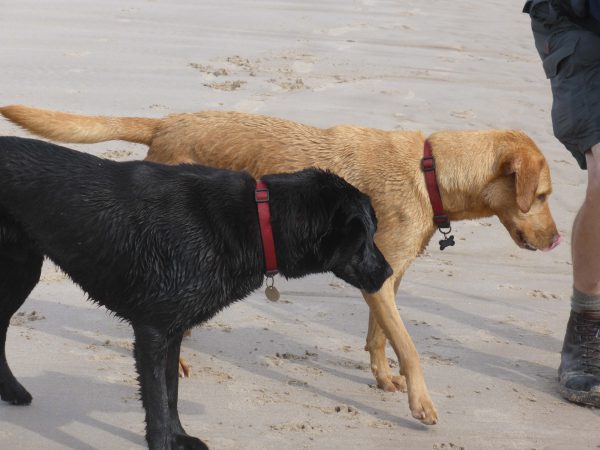 Approaching Greenhill Rocks there is a long pool of clear seawater, as the dogs chase around they run into the pool and are surprised by its depth. Labradors are built for swimming, but this is the first time that either of them has been out of their depth. No need for a rubber ring, they instinctively doggy paddle and clearly love it.

Dexter gets out, has a good shake and won’t be tempted back in. He looks at me as if saying “I proved I can swim but won’t do it again unless I have to”, whereas Crosby is straight back in with youthful enthusiasm.

Our route is straightforward along the beach all the way to Seahouses, climbing off the beach as we approach the first of the houses. We pass a Crazy Golf course and decide that it’s time for a contest. It’s years since we played Crazy Golf (mainly due to Lynnie not being able to cope with the constant defeats) as we approach the kiosk we debate the possible charge. We had not anticipated £3.50 each, there are probably golf courses in Scotland that you could play a whole round for a couple of quid more. So our plans are scuppered. Of course, it does mean that I retain my title without having to defend it.

Seahouses is a fishing village with a large attractive harbour, it is geared to tourists with at least three fish and chip shops. One of which claims to be the favourite chippy of the “The Hairy Bikers”, we agree that it is too early to eat and decide we will return later to treat ourselves.

I am always wary of places that describe themselves in their tourist literature as a gateway to somewhere else. In effect they are saying you don’t want to spend much time here but we are close to somewhere really interesting. Seahouses is the gateway to the Farne Islands. A group of bleak inhospitable islands, (between 15 and 20 depending on the tides), in the North Sea, but we discover later why they might be considered more welcoming than Seahouses.

The Farne Islands are popular with tourists because of the large colonies of sea birds and clear waters that also attract scuba divers. Over the years hundreds of boats have been wrecked on the Islands so there are numerous wrecks for divers to explore.

The Islands were also the scene of one of the most famous maritime rescues. Grace Darling was the daughter of the Longstone lighthouse-keeper, William Darling, and on 7th September 1838 she and her father rescued nine people in a strong gale and thick fog from the wreck of the Forfarshire, which had run aground on Harcar Rock. The story made Grace a National heroine. Sadly Grace died just a few years later from tuberculosis in October 1842, aged 26. She is buried in the churchyard at Bamburgh.

We enjoyed the walk along the beach so much that we decide to return by the same route, the boys are delighted by this choice and the chance of another run around on the vast expanse of sand. They are clearly enjoying their day at the seaside. As we turn the corner to Bamburgh we get cracking views of the Castle.

Bamburgh Castle is a Norman castle built on the site of an earlier castle. Unlike many castles we have seen on our tour this one is not in ruins. Various owners have restored it in the 18th and 19th centuries. The Victorian industrialist William Armstrong purchased the property and completed the restoration, the Castle remains in his family to this day.

We leave the beach by the Castle and walk through the dunes to the road and then wander to the churchyard to see Grace Darling’s memorial. It is slightly confusing because there is a grand memorial to Grace resting on a four-poster bed, and fifty yards away there is a head stone said to mark the spot where she and other family members are buried. Across the road the RNLI museum (closed at this time of the evening) appears to be dedicated to Grace.

Back in the car we drive down to Seahouses for Fish and Chips. The first chippy/restaurant is already closed. We wander over to the “Hairy Bikers” favourite as we are about to enter we step aside to let a woman come out to consult her family as to what they want. She is followed by a stern looking young woman who promptly locks the door and puts the closed sign up! Clearly customer service is not high on the requirements for the Hairy Bikers to enjoy a restaurant. I have honestly not seen anything quite like it. Unbelievable!