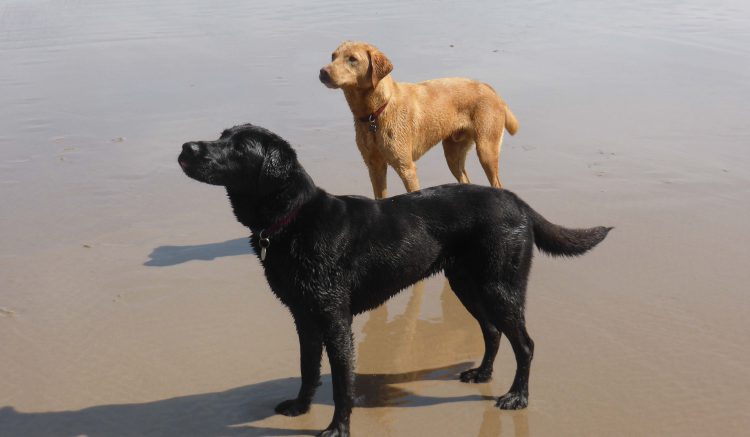 After yesterday’s trip to the beach the boys ask if they can do something similar today. The only criticism they had of yesterdays outing was the lack of a ball to chase on the beach (they were also a bit miffed, like us, about missing out on the fish and chips).

Back in the days when I was working I occasionally caught the train from London to Edinburgh. After the first time I always tried to secure a window seat on the east side of the train, there is fantastic scenery out of the window. One of the spots that always caught my attention was Alnmouth. So today we are going to see if it is as good as it looks.

Readers of this blog will have worked out that when we visit a place we do not drive to it and wander around. We, or more precisely I, prefer to walk into places to get the feel of them. So we tend to park up four or five miles away and walk. Today we park at Boulmer.

Boulmer is a small village close to a RAF helicopter station with an interesting history. It was originally established in 1940 as a decoy airfield with grass runways and plywood and canvas Hurricanes to divert German attacks from nearby airfields such as RAF Acklington.

In 1943 Boulmer was established as a satellite airfield to house the advanced flights of No.57 Operational Training Unit, which were flying Supermarine Spitfire’s (the planes that my maternal grandfather helped to build). As time went on the base developed in importance and was at onetime a key radar surveillance post during the cold war used to detect the movements of Russian planes.

In 1978 RAF Boulmer took on a role as a search and rescue station and continues that function today. The base continues to be a key part of the nations air defence and surveillance system.

Boulmer itself is a very small fishing village with no harbour. There are a few houses and a pub. It is reported that at one time this was a hub for smuggling. You can see how its isolation would have made it a difficult spot for the Excise men to police.

As we park up a group of lady swimmers emerge from the beach, part of a local women’s sea swimming club. It is a sunny day but I would not fancy going in the water. We walk south along the coast following a stretch of St Oswald’s Way. We go through a park of static caravans, they are well spaced and each has a very secluded spot with dense bracken providing cover but also masking views of the coast.

The way markers disappear so we find our way down onto the beach and soon reach a section where the boys can chase after a tennis ball. When it goes in the sea Crosby is quick to retrieve, whereas Dexter is a bit more wary. Once again there are miles of empty beach for the dogs to play on, the additional incentive of a tennis ball discourages them from scouring the shore for consumables. 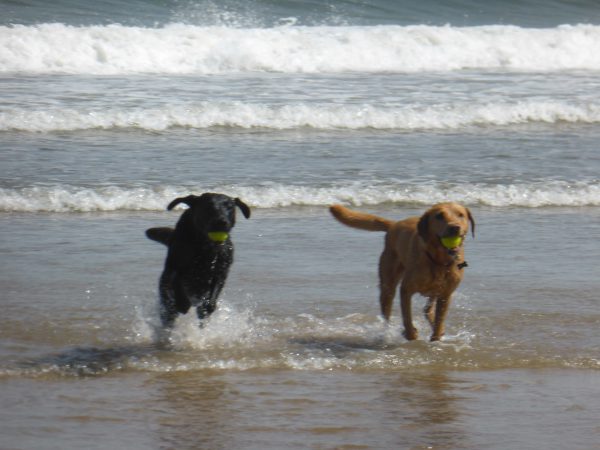 Eventually we reach Alnmouth. It is as pretty as it looked from the train. A number of boats are moored in the river and we sit by the old Ferryman’s Hut and enjoy the afternoon sun. Despite what others may think it is hard work doing all this travelling so somewhere to relax for twenty minutes is always welcome! 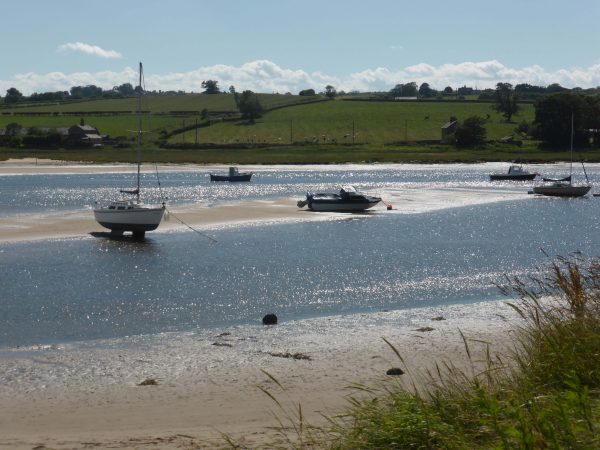 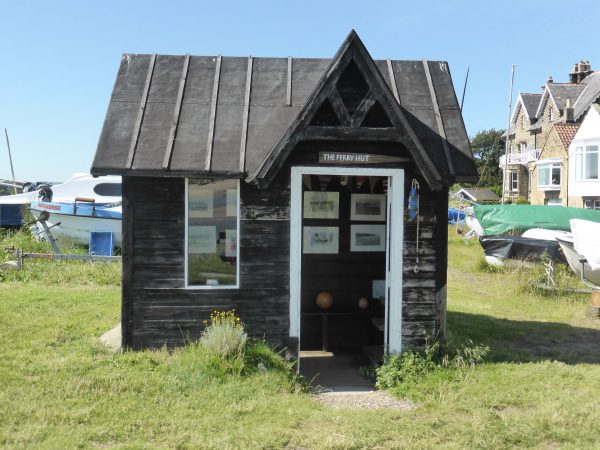 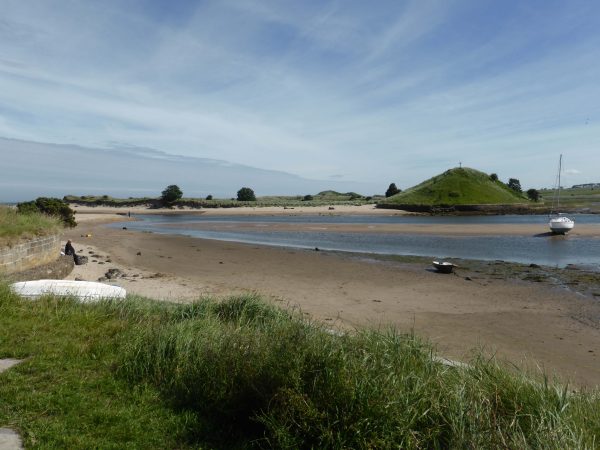 We explore the streets of Alnmouth, this was once a major trading port and primarily used for the export of grain. The trade declined when a violent storm in 1806 changed the course of the river. Many of the properties in the village are converted from granaries built to store the grain.

The village is home to Alnmouth Village Golf Course this is said to be the oldest nine-hole golf course in England. As we pass the car park a group of ladies are packing their clubs into their cars. We hear them chuntering about how one of their opponents needs to have her handicap reviewed. A constant conversation overheard in golf club car parks and bars. Perhaps the lucky lady has had a particularly good day, in which case her friends should celebrate her good fortune.

In my experience there are very few bandits in the golfing world. In over thirty years of playing golf I have encountered a couple. Around this time last year we were away on holiday with our good friends Mandy and Stuart. One afternoon Stu had tired of fishing and suggested we pop up to Bonner Bridge to play a round. It turned into a wet afternoon and the frustration of not having caught a fish played out in Stu trying to hit the ball as hard as possible to relieve his annoyance. It was not a contest (if he had been a horse we would have shot him to put him out of his misery).

A few days later Stuart suggested a round at Golspie, now this is a cracking golf course. Driving off on the first tee I stupidly suggest that I give Stu twelve shots (always a generous man) still thinking I should come home the victor. I hit the ball down the fairway (slightly to the right hand side as per usual) and know I am in for a good day. After winning a couple of holes I concede a couple of tricky putts to ensure the game is kept alive. At this point Stuart pulls out his Sombrero, puts on his poncho and lights a big fat cigar. I lose 6 and 5. Now that’s what I call a bandit. 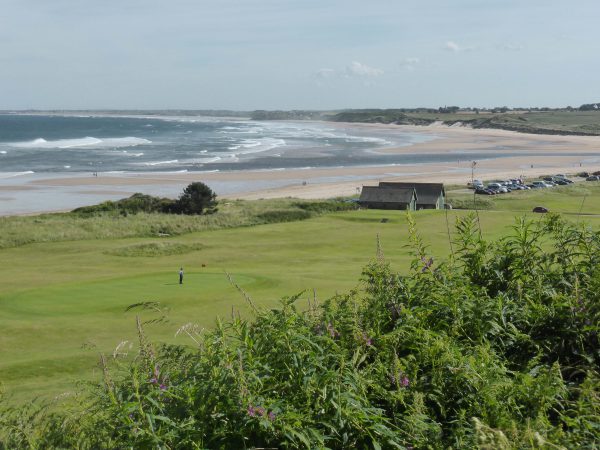 Lynnie has her heart set on an ice cream and wanders off to a café advertising a local product, but returns empty handed and disappointed because allegedly they had sold out. We set off on our return journey by following St Oswald’s Way taking us to the left of the golf course.

After a couple of hundred yards we climb above the course and come to an interesting structure with an inscription. “This Battery was erected by His Grace Algernon Duke of Northumberland K.G. for the use of the Percy Artillery Volunteers completed 12th March 1881”. Apparently the Duke allowed the volunteers to practice across his land and fire into the sea from this Battery above Alnmouth.
After a while we reach Alnmouth Golf Couse (not to be confused with the village course) this is said to be the fourth oldest golf course in England and was formed in 1869. This looks to be a cracking course and is very busy on this sunny evening. We go past the Club House and follow the footpath down to the beach.

Before this trip Dexter and Crosby had rarely been on a beach, now it is the highlight of any day. I have tennis balls for them to fetch so we spend an enjoyable time playing whilst Lynnie takes pictures and looks for ‘treasure’. 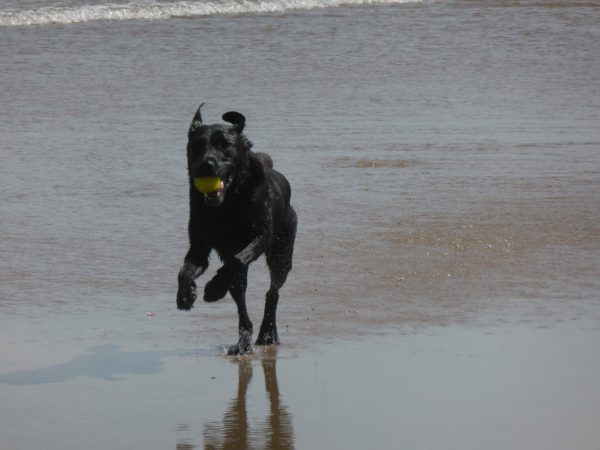 Eventually we head back to the car and then in need of supplies head into Alnwick. What a cracking town this looks, unfortunately we are in a hurry so do not stop long but make a note to spend more time here on our next visit to the area.

We are moving on tomorrow so head back to the Unicorn to take the awning down in the dry. 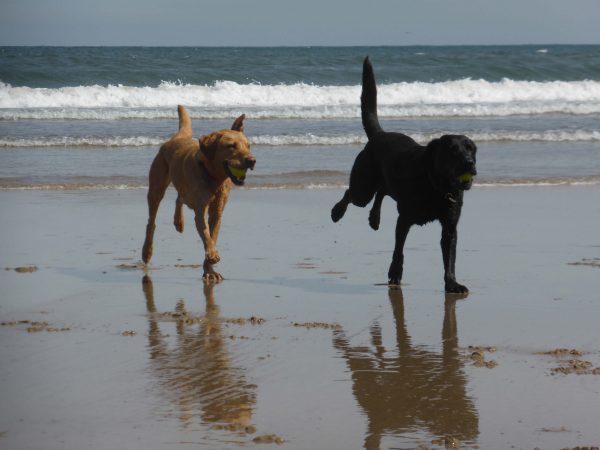 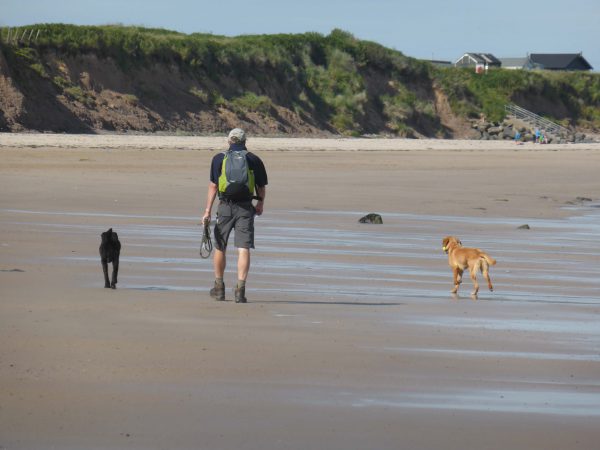