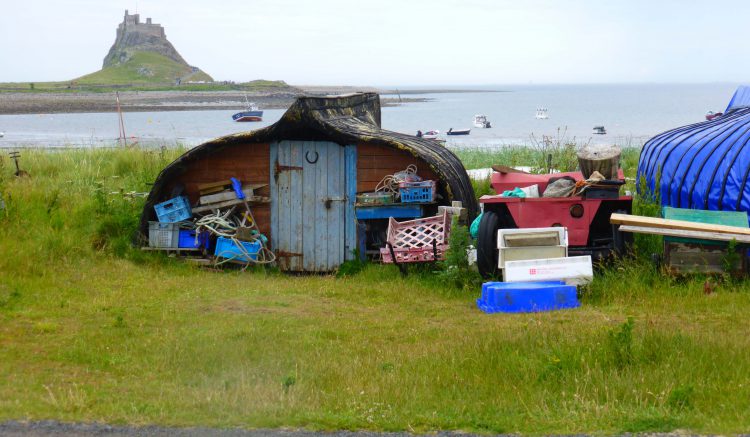 For the last couple of days Lynnie has been checking tide times and keeping an eye on the weather. Not an unusual activity for a girl that lived close to the sea in her childhood, but the attention now is to see when it is safe to go to Holy Island.

We drive down the coast and park up in the small car park on the mainland. Lynnie goes off to check the tide timetable and it confirms that we are safe to cross the causeway and will have about seven hours before we need to be back on the mainland.

It is possible to walk across the sands, but highly recommended that you have a local guide to ensure that you do not end up in quicksand. We are taking the tarmac causeway (which does have warnings not to leave the causeway) and head off on the three-mile walk to Holy Island.

There is a steady stream of traffic but the road and firm sand to the sides make it a pleasant walk. The sun has dried the road and it is difficult to believe that only an hour or so ago all of this was underwater. Soon after we set off we cross a bridge with a refuge hut high above the road. The height of the hut indicates how high the water must come in. It’s a small hut and would not be an ideal place to spend six hours on a stormy night. You would definitely not want to get caught out on this crossing. 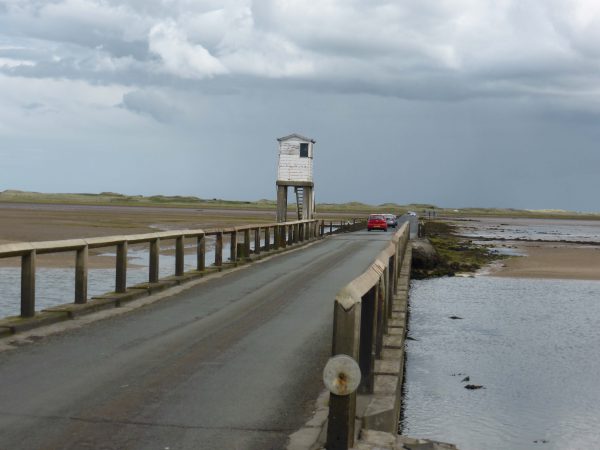 We can see Bamburgh Castle in the distance and the sky is black in that direction. We know we are in for some rain at some point this afternoon. On reaching the island we walk around the coast to the priory.

On route we stop to visit the small island that was the location of the first chapel. Then onto the main island where we climb above the priory to get a good view. 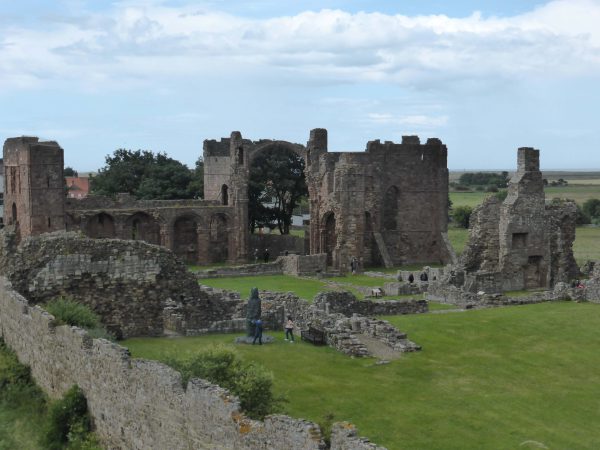 An Irish Monk, Saint Aidan, founded the monastery at Lindisfarne he had been invited there from Iona off the west coast of Scotland by King Oswald of Northumberland to convert his subjects. (Clearly there was some history between these two, it would not have been an easy journey and a pretty inhospitable place to end up.) For his troubles St Aiden has a statue erected in St Mary’s churchyard overlooking the ruined medieval priory.

We walk down to the harbour area with its stacks of lobster pots and upturned boats converted into fisherman’s huts. We debate walking to the Castle, but as it is closed and the threatened rain is fast approaching we decide to wander through the village then find ourselves back at the causeway.

Returning across the causeway we hear the seals ‘singing’ on the sandbanks. A strange and eerie sound, it must be a bit spooky on a dark misty evening.

Arriving back at the car in plenty of time to avoid wet feet we wonder how many people get caught out on the causeway. I can just about understand walkers suddenly finding they have not left enough time. But for car drivers there is really no excuse. Surely there can’t be many foolish enough to set off when the tide table and the warning signs so clearly indicate when it is unsafe.

Back at the Unicorn a bit of research shows that there are any number of people caught out. In July last year the County Council highlighted that drivers were ignoring the flashing warning lights and getting stuck in the rising tide. This included a coach carrying forty people! Apparently in another incident two drivers had to be stopped setting off an hour after the last safe crossing time and in June 2012 three cars were stranded within twenty-four hours. You have to wonder at the idiocy of some people.

It is a clear evening so we take a late stroll down to the Tweed to watch Keyhole and his family at work fishing for salmon. They have just started and throw the first “Shot” just after 11.00pm. They are not expecting many fish tonight, or for much of the week, but will stay on the river until 5.00am. It is a short season for them to work (just nine weeks left) so they have to make the most of every opportunity. There is good humour amongst them as they fish. I am sure that by the end of the season the lack of sleep (and lack of fish) could lead to a few frayed tempers. 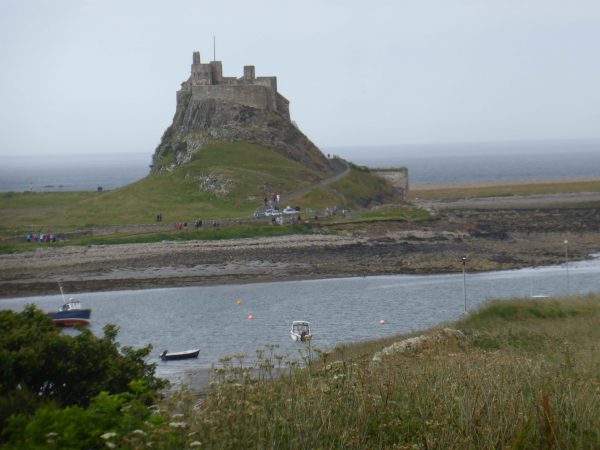