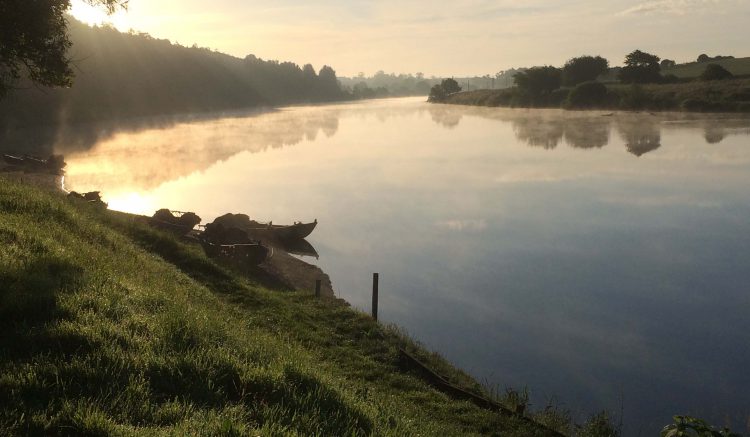 My four-legged alarm clock goes off at 4.45am. This is unusual so a sure sign that he does want to go out. At home I would open the back door and send him into the garden, but that is not an option here. So it’s boots on and off we go through the grounds of Paxton House. Our walk takes us down to the banks of the River Tweed and as we arrive the mist is rising from the river and the early morning sun makes this a cracking scene. Time to stop and watch the river for half an hour, what a great place this is.

After yesterday’s superb walk along the coast we decide to head for the sea again. This time we go north. Eyemouth is just a few miles up the coast from Berwick-upon-Tweed across the Scottish border and those few miles make a lot of difference, the town has a number of Scottish flags flying and notices indicating which way residents will vote in the Independence Referendum in a few months time.

As we approach the town centre the lampposts are decked with posters showing previous Eyemouth Herring Queens, the earliest we spotted was Miss Margaret Tait the 1948 Herring Queen. It gives you an early indication of the importance of fishing to this community. Apparently the origins of this tradition date to a picnic held to celebrate the end of the 1914 – 1918 war. A “Peace Picnic” was organised and this soon became part of the annual town calendar and was looked upon as a holiday for the fishermen.

In 1939 it was decided that the crowning of a Queen would be added to the picnic and they opted for a name that would symbolise the fishing community. Up until recently students of the High School elected the Herring Queen, but in 2011 it was decided that this was too much responsibility for the children and a panel of local townspeople made the selection after nominees were interviewed. Democracy rules?

In the centre of Eyemouth stands a bronze statute to local hero William (Willie) Spears (1812-1885). The statue shows Spears pointing to Ayton, the scene of the peaceful demonstration he led against the tithes on fish levied by the Church of Scotland, a tithe that even continued after the great Disruption of 1843 when most fishermen left the established Church to join other congregations. 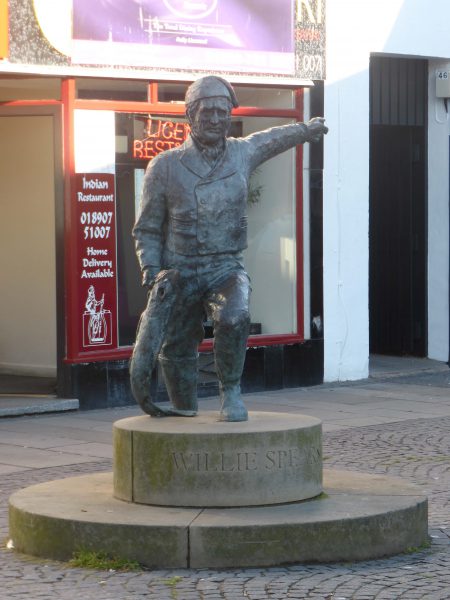 Eyemouth was struck by disaster when on 14th October 1881 most of the fishing fleet, some 20 boats and 129 men were lost in a terrible storm at sea.

Our walk takes us north from the town, initially along the beach and then climbing steps to take us up on to the cliffs for the coastal walk to St Abbs. Followers of this blog will know that I am not keen on cliffs so this walk is going to be a real test for me. The first little cove we come to is dramatic but has steep drops. Eyes half closed and looking inland I manage to negotiate this hazard (only four more miles of this!). 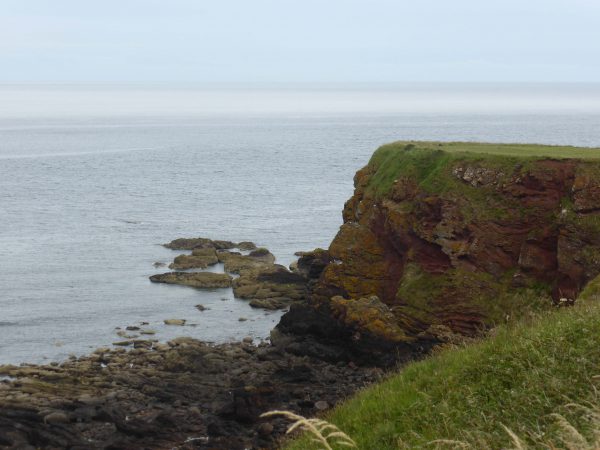 We round the corner and follow the coastal path all the way to St Abbs. Along the way the views are stunning, first we are above Killiedraught Bay, then down and up through a valley where a river runs to the sea. One section has a six foot wall on the cliff edge (now I really appreciate that – it would be ideal if all cliff walks had this feature). Down on the wide sandy beach of Coldingham Bay, apparently some of the Taggart TV programmes were filmed here. It looks too beautiful a spot to commit a “muddar” here.

Then a stroll down to the harbour at St Abbs, there are hordes of divers. Apparently this is because the waters around St Abbs are particularly clear and therefore popular with scuba divers. Presumably these clear waters are what also attract the huge colonies of sea birds that populate the rocks and cliffs. 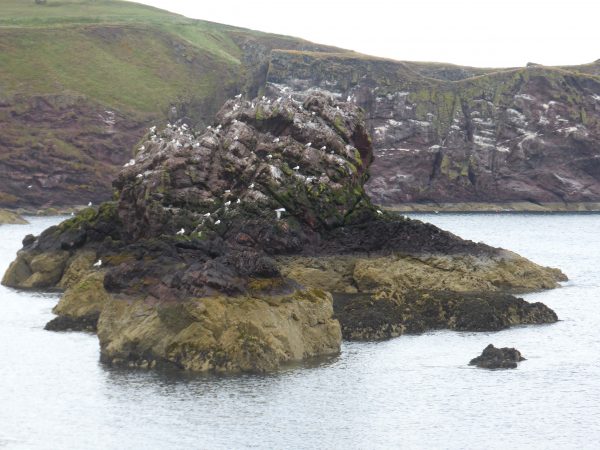 For our return we decide to retrace our steps. At about the half way point Dexter decides that, like me, he does not like cliff walking and sits down. Sometimes he is a funny dog and does not like retracing his steps on a walk. I wish he could explain, but it is almost as if he is thinking what was the point of walking there just to turn around and come back.

For a chap who does not like cliffs I have enjoyed today’s stroll, it has been about eight miles and I have only had a couple of dodgy moments. 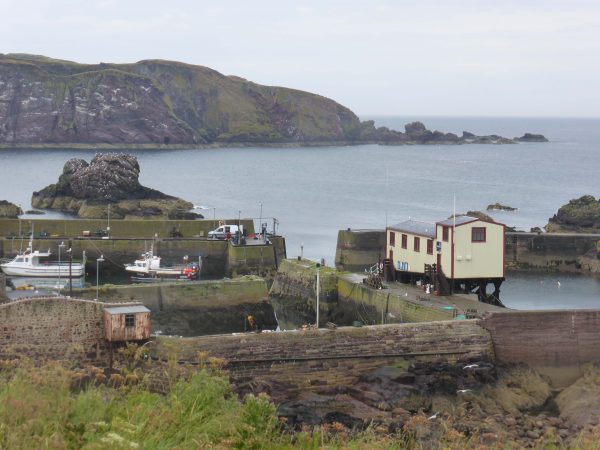