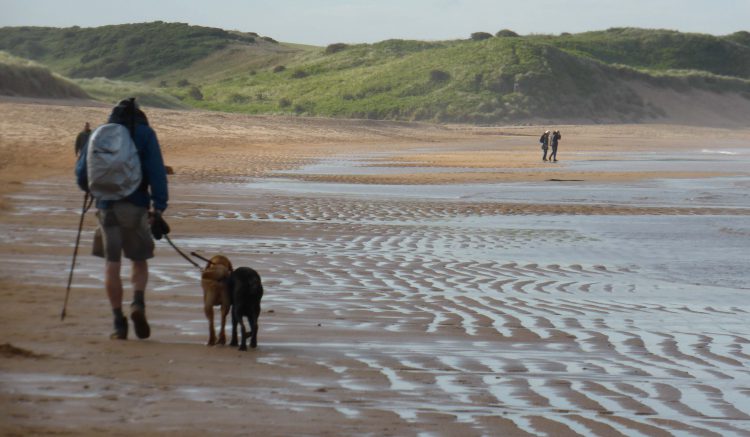 There is heavy rain in the night and the forecast for the day is a bit iffy. But by the time the dogs want to go for their early morning walk things are a bit brighter.

We are on a cracking site and the early morning walks in the grounds of Paxton House are a treat. There are few folk about and the scenery is fantastic. As we set off we bump into a lady with her Collie, she is heading in the opposite direction, but twenty minutes later we meet again by the river and stop and chat. These chats with strangers are always a highlight.

Further along the riverbank I bump into Keyhole, who had been fishing for salmon on the night of our arrival. Another stop for a chat. This chap has spent his life in the area and knows the river intimately. His father and grandfather fished the same river with their boats and nets.

As we chat he surveys the scene, eyes ever alert to movement on the river. To allow the salmon to migrate there is no fishing with nets from late Friday evening to early Monday morning. But he still comes down to feed the ducks and keep an eye on things. He points out the mother duck teaching her ducklings to fly and then a Sandpiper swoops over the river.

To my untutored eye the river looks calm, but he points out the ripples on the water from the boat that passed through twenty minutes ago. He shows me where there is a slightly raised section on the riverbed and explains that it will need work so that the salmon do not use the gap it creates as an exit route from his nets. We talk dogs and life in general, fascinating stuff.

Our walk today is on the coast by Dunstanburgh Castle, as recommended by Alan and Anne the other evening, it also features in our 100 Great Walks book. We begin at Low Newton walking down towards the seafront, just before the pub and cottages we take a footpath on the right and follow this to the edge of the golf course. Our route then takes us away from the coast along the edge of the Newton Pool Nature Reserve towards North Farm.

After crossing a couple of fields we emerge at the roadside and turn left into Embleton. Walking through the village we look over the low walls at the gardens, one particularly well-stocked vegetable patch is impressive. At the Dunstanburgh Castle Hotel we turn left and follow the road into the village centre, after a few hundred yards we turn right passing the Greys Inn. We ignore the welcoming bench and opportunity of a pint and continue on soon reaching the Blue Bell Inn where we take a lane to the left towards Dunstan Steads.

At a bend in the road just before Shirewater Low Mill we take the footpath to the right and follow it through a boggy field, then across a sparse hay meadow into a plantation. Our guidebook says turn right, so we do. This takes us through the plantation and after climbing a stile along the edge of arable fields. The route is well walked and easy to follow, that is until we reach a point where we should cross as stile. There is no stile. We are not the first to look for it, the nettles have been beaten down in various spots but still no sign of a stile or the footpath. Both the map and the guide show it as being in the corner of the field, we are definitely in the right spot, but it is not here.

After twenty minutes of searching we retrace out steps to the plantation and take the footpath to Dunstan Steads, this path is clear and from Dunstan Steads we follow a concrete track to Dunstan Square. Along the way we pass a disused quarry and limekiln.

From Dunstan Square we take the road through Dunstan and on to Craster. This is a small fishing village with an attractive harbour. At the end of the harbour is the remains of a taller building that was used to convey the local stone from the quarry (now the car park) to boats in the harbour. 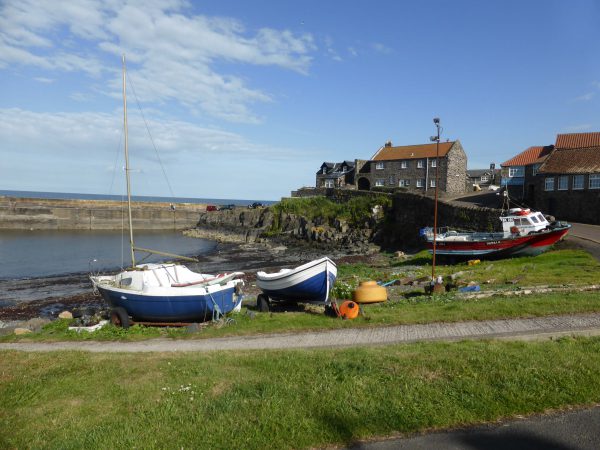 The route confusion has delayed us so we only stop briefly before turning left to walk to Dunstanburgh Castle. Through two fields of bears, that show no interest in us or the dogs, and the castle comes into clear view in front of us. 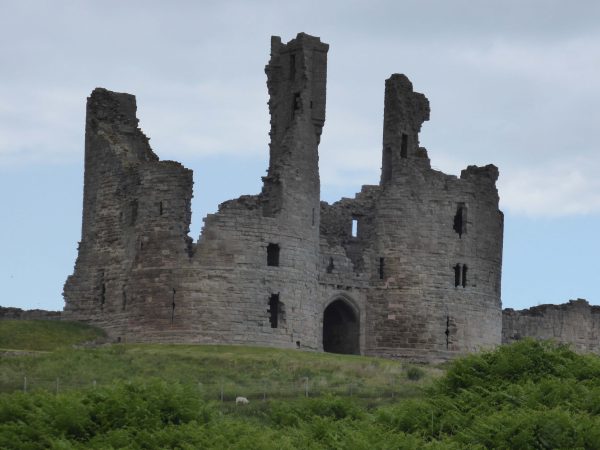 Built in 1313 by the Earl of Lancaster it is said to be the largest castle in Northumberland. When John of Gaunt became the Duke of Lancaster in the late 14th century he added to the Castle. By the late 1400’s it was crumbling and stone was taken from here for other buildings. The ruin left is an impressive sight standing high on the headland.

As we skirt the Castle the heavens open and we are quickly soaked, it continues to rain heavily as we walk along the side of the golf course, but blue sky is visible behind the rain clouds.

At a junction of paths we cross the golf course to the beach. There is a stunning rainbow over the water and the sun shines on the wet sand. 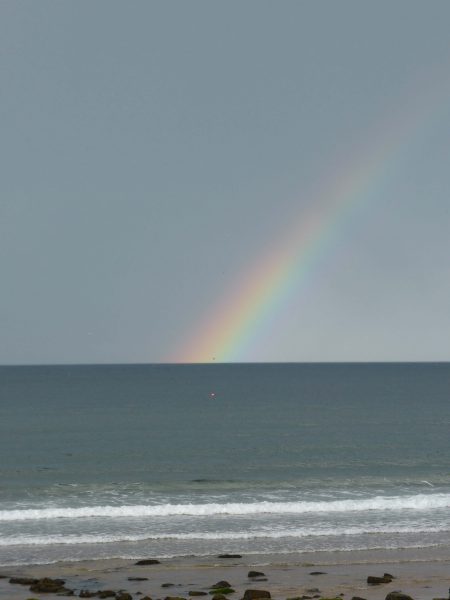 This is a really beautiful stretch of beach, the boys run around and play on the sand and in the water. The view back to the Castle is impressive and walking along Embleton beach in the sunshine is tiptop.

Embleton beach is huge, but we meet six or seven people as we walk. Alan said that this was a wonderful walk and he was spot on.

In the evening we pop into the Cross Inn for a bite to eat and a pint. A friendly local pub serving pub grub and good ale. Not a bad end to another cracking day. 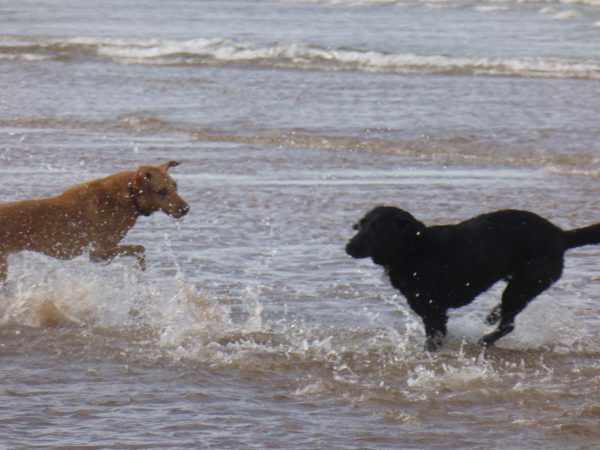