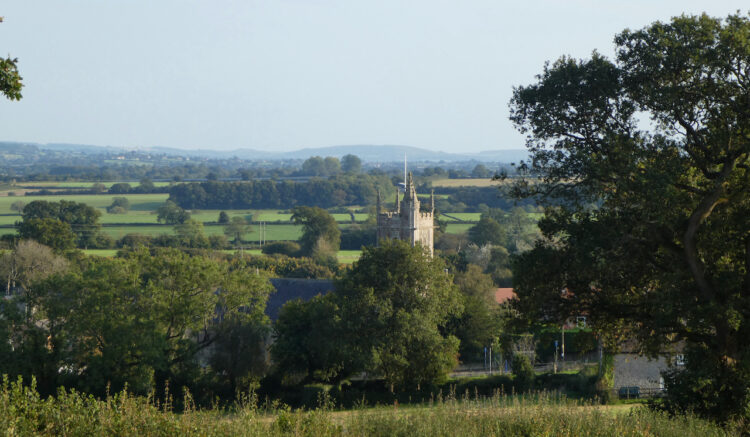 When we are away in the caravan we try to do as much walking as possible from the site and avoid travelling too far in the car.  This is an area we have not previously visited so today we plan to explore the area to the north of the site.  The first section of our route repeats the walk I did yesterday afternoon.

Leaving the site we turn left into Waterloo Lane and follow this towards Silton soon passing the recently restored Waterloo Mill apparently dating from 1815 and sited on the River Stour.

Soon we take a footpath on the left leading through a kissing gate into a field and follow this up to reach another field with a large oak tree in front of us.  This is Wyndham’s Oak apparently over 1,000 years old with a circumference of 38 feet making it the greatest of any tree in the Country.

Named for Sir Hugh Wyndham (1602 -1684), who lived an eventful life.  He was appointed a judge of common pleas by Oliver Cromwell and was imprisoned after the restoration of the Monarchy and later pardoned by Charles II.  After the fire of London he was a Judge at the Fire Court, which determined responsibility for payment of property rebuilding.

He lived much of his life in Silton and is buried in the village church.  He is said to have spent hours sitting in the shade of this oak tree and as a result it is named after him.

We continue across the field towards the church and after going through a gate turn left into the churchyard of St Nicholas’ Church parts of which date from the 12th century but most of what can be seen today is the result of a major restoration project in 1869.

Through the churchyard we reach a road and turn right to walk down the hill through the village.  This is a well spread out village and we carry on for half a mile after passing the last house to reach the village hall.  This was built in 1886 as a school with an attached cottage for the school mistress.  The school closed in 1926 and the building then became the Village Hall.

On reaching a B road we turn left and pass under the A303 and walk up to Bourton and turn left.  This road used to be the main A303 and back in the days when I first travelled daily to work in Taunton I sat for many hours in traffic through this village.  These days, after the creation of the dual carriageway to the south of the village the road is much quieter.

After a quarter of a mile we turn right into Bridge Street at a signpost to Bullpits Golf Course.  We follow this road to reach new houses on what not so long ago was the site of Bourton Mill.  In the 18th century it was the site of a flax mill, built to harness power from the River Stour.   This later became a foundry and then during World War I became a munitions factory.

Above the mill is New Lake created to provide the water for the mill.  On 28th June 1917 after a violent thunderstorm the dam failed and the foundry was wrecked. Fortunately no lives were lost and the site was used  to produce parts for shipbuilding and then later became a plant for producing dried milk.  Now it is a housing estate with little evidence of its history.

Our route now follows the road up Factory Hill and at the driveway to Bullpits Golf Course we turn left and follow the footpath across a few holes of the course.  This is a relatively modern course built in 1986 and is mainly Par Three.  It is in a stunning setting so whilst not being long it must be an attractive place to play.

Following the footpath we soon reach Pen Mill Hill and turn left following the lane as it starts to descend on Coombe Street to Penmill and across the River Stour.

Just after passing the Wessex Water pumping station we take a footpath on the right which leads between barns.

The path now crosses fields and at a junction of paths close to a barn we turn right and descend  to cross a tributary to the River Stour and then enter woodland and follow a path to reach a bridge across the River Stour.

We do not cross the bridge, instead we follow a path that heads north west besides the river to reach a ford with a bridge beside.

This track leads to a minor road close to Gasper Farm.  We turn left and follow the road through woodland forming part of the Stourhead Estate.

We stay with the lane to a junction where we turn left following a signpost towards Penselwood.  This continues uphill passing through the site of Pen Hill Fort and then at a track on the left we turn to follow this south east through Castle Wood.

There are a network of paths in the woods but we stay with the track which keeps close to the right hand edge of the woodland.  The track brings us to cottages where we turn right along a minor lane to Pear Ash Farm. At a junction opposite the farmhouse we turn left heading south along the minor road to a junction with Field Lane.  Here we turn left and continue heading south, passing Bleak Farm and then as the road turns right to head west we take a track on the left along a lane.

At a crossroads of footpaths we turn right and follow a footpath downhill across fields heading south towards Bourton with the church as our target.

On reaching the road through Bourton we turn left and stop to visit St George’s Church.  According to the church website it was built in 1810 to commemorate the Golden Jubilee of King George III.

We now continue on the pavement heading east soon reaching the war memorial where we turn right into a lane signposted to West Bourton.  We go over the A303 on a bridge and then within a hundred yards take a footpath on the left along a farm drive.  This leads to Feltham Farm and a minor road.  It was our intention to take a footpath across a field here, but the field is full of cattle.

To avoid the cattle we follow the lane, which soon turns left on Grimsey Lane and continues on to a junction with Church Road.  Here we turn right and retrace our steps back to Silton church.  At the church  we decide to continue on past Manor Farm with its impressive barns.

We stay with the lane to the junction with Waterloo Lane where we turn left and head back to Wyndham Farm.  Our walk has covered close to twelve miles and has taken us into Dorset, Wiltshire and Somerset.