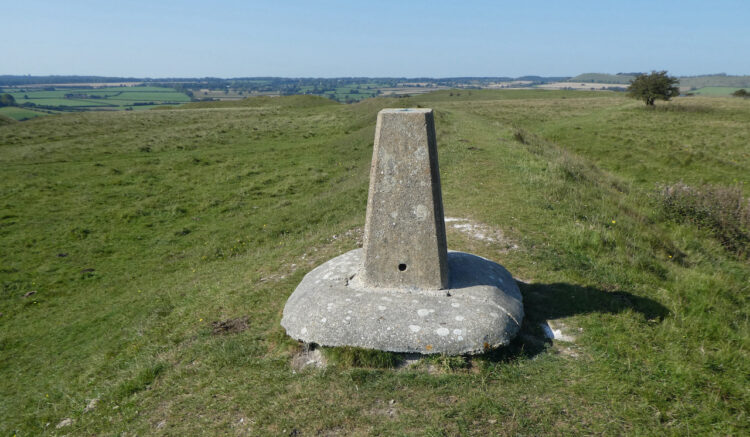 Over the last thirty years I have frequently travelled between Salisbury and Taunton and driven past Mere on the A303.  I can’t recall ever visiting the town and have often looked at the hill close to the main road which has flag pole on the top and wondered what remained of the castle that once stood there.  Wyndham Farm CL is only a couple of miles from Mere so today we are heading there to visit the castle and walk on White Sheet Hill.

The starting point for our walk is the free car park in Castle Street (BA12 6JE) close to the centre of Mere.  Leaving the car park we turn left and then on reaching the first house after the car park we cross the road and take a footpath up an alley way between a house and a wall.  This leads to Castle Hill Lane which we cross and continue uphill on a path besides a children’s playground.

There is no trace of the castle that once stood here.  It was built in 1253 by Richard the Earl of Cornwall.  He was the brother of Henry III.  After Richard’s death his son Edmund inherited the castle but on his death it returned to the Crown. In the 14th century Edward III made the site part of the Duchy of Cornwall where it has remained. On top of the hill stands a Memorial to the 43rd (Wessex) Infantry Division.

There are fine views from this spot and to help identify points on the horizon there is a toposcope. However, not all points are visible. As hard as we look we cannot spot John O’Groats which is apparently 530 miles away.

From the summit of the hill we descend by the route we came up and then head west along a path that follows the ridge of Long Hill.  A herd of goats appear beside the path, some take umbrage that we are walking through their territory and are reluctant to let us pass along the track.

The route descends to a gate where we turn right and join a track that soon reaches a bridge across the A303 and then continues along the edge of a field.

We stay with this track as it heads  through fields towards Search Farm.  There are fine views of White Sheet Hill to our right and it looks like it is going to be a good ascent to reach the top later.

After passing Search Farm we reach a junction of tracks where we turn right on a tree lined path.

This path leads us to Beech Clump where, besides the path, is a memorial dedicated to the crew of Dakota III TS436.  On 19th February 1945 this plane took off from the nearby wartime airfield at RAF Zeals with a crew of airmen heading back to their base in Leicester.  In low patchy cloud the pilot failed to gain enough height  and hit the trees on Beech Clump.  As a result the plane burst into flames and the lives of twenty airmen were lost.  The only survivor was the pilot.

Apart from the memorial there is no indication now of the tragedy that occurred in this clump of trees.

We continue along the track to reach a parking area and then at a fork in the path follow a route that gradually ascends the ridge.

Heading upwards we enjoy the cracking views of the chalk escarpment of White Sheet Hill.

The path leads us to the top of the hill where we spot the remains of an old metal fence post.

Our route is to the right but first we go left across the access line to reach the fence line so that we can view the old milestone that sits beside the Drove which is known as the London Road.  The inscription reads XXIII Miles from Sarum 1750.  Below the inscription there is an Ordnance Survey cut benchmark which would have been used as part of a mapping survey of this area.

We now head back to the metal fence post and follow a path heading south east along the top of the escarpment.  On reaching the ramparts of White Sheet Castle we turn left and walk up to the Ordnance Survey trig point on the summit of White Sheet Hill, this is the 218th I have “bagged”.

White Sheet Castle was an Iron Age Hillfort and much of the site is preserved so it is easy to imagine the scale of the fort. Being some distance from the nearest car park it is amazingly quiet and despite it being a stunning day we can only see two other people enjoying the views.

From the trig we head south east to reach a fence line and follow this north to a gate entering another access area.  Here we turn left and follow the fence line back up to a gate besides a covered reservoir.  We cross the track and take a footpath heading diagonally across a field to reach anther track where we turn left and then besides cattle pens enter a field on the right.  We head northwesterly across this field following the contours around the top of a valley.

The path then heads north across White Sheet Down.  There are stunning views as we continue along the top of the downs and then start to descend to a gate which leads to a track.

Joining the footpath along the track we pass through the yard of Coombe Barn farm and continue to a junction of tracks where we turn right.  Soon we enter a field  and continue through a second field to reach the farm driveway to Rodmead Farm.

We turn right along this track following the footpath as it skirts around Rodmead Farm with its attractive barns.

At a fork in the track we go right and start a long steady ascent up the side of the escarpment passing Rodmead Wood and continue on until we reach a junction with the Mid Wilts Way (MWW) long distance trail.

Now we turn right and go through a gate and follow the route of the MWW as it follows the fence line above the attractive valley.

On reaching a track we cross and continue on the MWW through a field of pasture.  This is access land but we stick to the route of the path until we reach a fine stone bench erected by the Mere Footpath Group.

Just after the bench we leave the Mid Wilts Way by forking right on a track heading steadily downhill.

As we descend there are cracking views of the escarpment of White Sheet Hill.

The track leads to a lane, Manor Road, where we turn left and follow this lane to pass Manor Farm and then take the bridge over the A303.  Now we continue on the road into the centre of Mere close to the Clock Tower.  Apparently this was built in 1868 and was given to the town by Albert the Prince of Wales.

From here we take Castle Road passing the George Inn and the fine Old Ship Hotel.  Unfortunately the Ship is permanently closed and looks in need of a full renovation.  The stunning building dates from 1711 and is Grade II listed because of its many fine external and internal features.  Castle Street, on which the pub stands, was once the main Exeter to London route so this would have been an important staging point.

It is sad to see such fine old buildings no longer in use as pubs.  Hopefully, someone will buy it and re-open it as a hotel again.  We now continue along Castle Street to our starting point at the Castle Street car park.

Our walk has covered nine miles and we have been treated to some stunning views.  It is a walk we hope to do again before too long.

You can view this 8.6 mile walk on OS Maps and download the GPX File Here (Subscription to OS Maps Required)