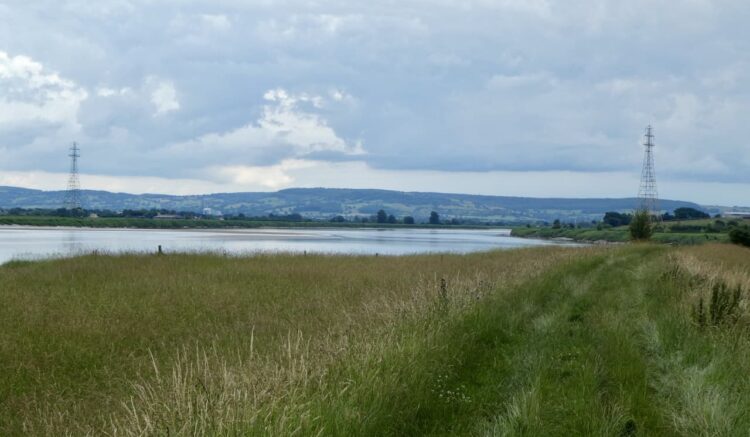 A few days ago one of my Twitter buddies Olly recommended that whilst in this area we walk the loop of the Severn Way from Frampton on Severn as it took an interesting circuit around a large bend in the river that goes around Arlingham.  I follow Olly’s walking blog and know if he recommends it it must be a good walk.

Our starting point is the Canal and River Trust car park besides the Gloucester and Sharpness Canal which is besides the Sandfield Swing Bridge (GL2 7LA).  The pay and display car park also serves the Cotswold Canal Trust Visitor Centre and the Stables Cafe.

Leaving the car park we start our walk by walking back past the Stable Cafe and Swing Bridge.

The Gloucester and Sharpness Canal opened in 1827 to enable vessels to avoid dangerous channels in the River Severn where it loops around Arlingham.  It starts at Sharpness Dock and covers 16 miles to Gloucester Dock.  Apparently when it opened it was the widest and deepest canal in the world.

We soon reach the Shipton Mill on the far side of the canal.  This mill was originally built by Cadbury’s in 1917.  The location was chosen so cocoa beans imported into Bristol Docks could be transferred to barges and carried up the canal to the mill, there they were mixed with milk from surrounding farms to create chocolate crumb.  This was then transported by canal to Gloucester and then continued on the canal network to the Bournville factory in Birmingham.  Cadbury’s closed their mill here in 1982 and it is now a flour mill.

We continue towards a road where Fretherne Bridge crosses the canal. Or at his moment does not cross because a barge is about to go through the swing bridge.

At the road we turn right and then almost immediately as the road bends to the right we continue straight on a lane towards Fretherne and Arlingham.  In about 100 yards, just after passing a bungalow we take a footpath on the left which is way marked for the Severn Way.

At the end of the lane the footpath goes to the right and follows a fence line besides trees.  It is the time of year when paths are overgrown and we have to contend with nettles and brambles.  I assume we are unlucky because this must be a well walked route as it forms part of the Severn Way.

After a couple of hundred yards we reach a gate in front of us, here we turn to the left to enter a field, thankfully this is easier going as the path continues towards the River Severn.  On entering another field we turn to the right and follow the path along the fence line.

At the end of the field we follow the fence as it sweeps to the left and then join a flood defence embankment and continue on with the River Severn to our left.

Our route is now very straightforward, we are going to stick with the Severn Way as it follows the River Severn on a large loop around Arlingham.  We soon pass Hock Ditch and then across the fields we can see the gothic steeple of St Mary’s Church in Fretherne. Built in 1847 this church is apparently known as Gloucestershire’s mini cathedral.

We continue to enter a meadow above Hock Cliff with a warning sign to beware of getting too close to the edge because of recent cliff erosion.  The path is fenced but then we notice that in some parts the erosion has come under the fence.  Fortunately there is plenty of room in the field so there is no need to get close to the edge.

Leaving the meadow we enter woodland above the cliff.  Apparently the shoreline below is popular with fossil hunters looking for treasures amongst the Blue Lias rocks.  The erosion of the cliff face frequently provides new rocks to scour.

We cross a footbridge and leave the woods to be greeted by an expansive view in front of us.

The path now descends gradually through fields to once again join a flood defence embankment.  In front of us is the Forest of Dean on the western side of the River Severn.

Across the river we can see the small shipyard at Bullo Pill.

The river has started to bend now and we soon see the shipyard at the old docks at Newnham on Severn.  Apparently this dock was once a major trading post, however, that stopped soon after the Gloucester and Sharpness Canal opened in 1827.

Staying with the embankment we pass through a gate and reach the Old Passage Inn, I offer Lynnie a cup of tea, but she opts to sit on a bench besides the river looking across to the other side.  There are warning signs that it is dangerous to enter the river.  Frankly it was the last thing on my mind.

Heading off again we go through a gate and continue along the flood defence embankment through fields of cattle, which show no interest in us or Crosby.  The river is starting to bend again so we get an ever changing view and soon see the impressive Garden Cliff.

As we pass Milton End Farm we stop to talk to a chap who is a regular visitor to this spot.  He enthusiastically regales how impressive the Severn Bore is when it passes this farm.  He caveats the statement by saying it is a lot more impressive further up where the river narrows. He says it is strange because you can hear the volume of water and debris coming up the river before you see it and then within seconds the river has risen so it is over the banks and in a high bore up towards the top of the flood defences.

It is something that neither Lynnie or I have seen.  The next one is towards the end of the month around the time of the full moon.  Unfortunately we will not be in these parts then, but we agree we should plan a trip so we can catch a bore.

Soon the path goes along the edge of a field with electric fencing keeping cattle away from the path.

We continue along the edge of narrow fields to reach a metal gate leading to a minor road which we follow until it bends sharp to the right.  Here we go along a dead end lane which leads to a footpath heading towards Upper Framilode.  We join a lane to pass St Peter’s church and continue on until we reach a footpath on the right which goes besides the disused Stroudwater Navigation canal.

We follow the canal past the Ship Inn and continue along a section of the canal that appears to have been cleared of weeds.

On reaching a road at Saul Bridge we cross and continue besides the old canal and then along the edge of fields to reach the Gloucester and Sharpness Canal at Junction Bridge.  This is the point where the Stroudwater Navigation crossed the main canal.

We stop to read an information board and then notice that a barge is approaching and the swing bridge has opened.  The barge is entering the marina and has to go up and turn around before making the turn into the marina.

We now turn to the right and follow the canal towpath the short distance back to our starting point in the car park.