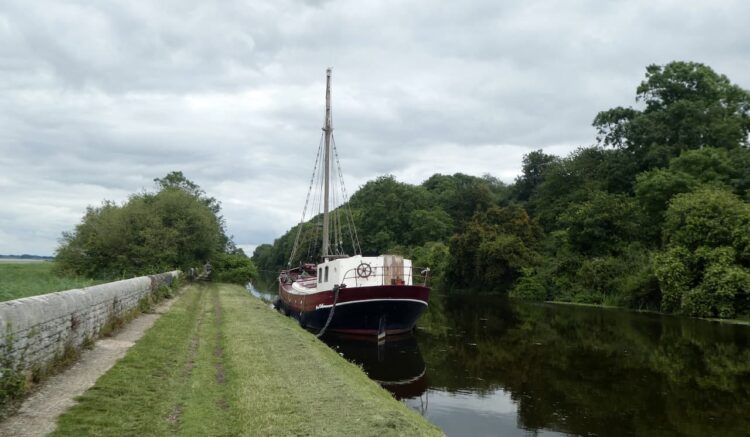 On our travels we frequently walk along canal tow paths.  I particularly like them because they are usually fine feats of engineering and part of our great industrial heritage.  Today we are heading to Sharpness and plan to walk a section of the Gloucester and Sharpness Canal.

The starting point for our walk is the Canal and River Trust car park at Sharpness Viewpoint (GL13 9UF).  This a free car park  located besides the entrance to Sharpness Docks.

We start by leaving the car park and following the Severn Road to head back to the entrance to the docks.  Here we turn right on the B4066 and follow the pavement to a footpath on the left that goes through a metal kissing gate.  We are on the route of the Severn Way, which leads us through a field to a railway line crossing.  On the other side of the line we continue on a path besides a playing field and then turn left on Oldminster Road and soon pass the Pier View Hotel.

We stay with the Severn Way and reach the old Severn Bridge and Railway Hotel which is now private accommodation.  The path bends to the left and heads towards the docks with the old railway line soon running alongside.

To our left is a good view of Sharpness Docks.  The docks were built in 1874 to develop Sharpness as a port.  Prior to that there was a dock further to the north that opened in 1827 to provide access to the Gloucester and Sharpness Canal which took vessels to Gloucester docks.   The new dock continues to be used as a commercial port which is only accessible to vessels at high tide.

We go over the swing bridge and continue on to reach a road where we turn right following the Severn Way way-markers.  We then turn right along a lane with a large grassy car parking area to our right.  Very soon we reach a monument to the Training Ship Vindicatrix.  From  1939 to 1966 the Vindicatrix was moored in Sharpness Docks and used as a training ship for boys going into the merchant navy as deck hands or stewards. The training lasted between two and three months and they lived under the same conditions as if they were at sea.  During its 27 years in operation 70,000 boys were trained on the vessel.  After it finished being used as a training ship it was taken to a yard in Newport and broken up.

The track passes the Sharpness Dockers Club and then heads down to a parking area for the canal.  The footpath is on the right of the car park and leads down to a marina area where we cross the canal.

To our left is the original Sharpness dock which opened in 1827.  Now the gates to the port have been permanently closed so that the dock area maintains a constant water level with the canal.

We turn and walk along the towpath with the canal to our right to pass a plaque on a building which indicates where Vindicatrix was moored.

The towpath soon leads away from the marina and heads along the canal.  When it was built in 1827 the Gloucester and Sharpness canal was apparently one the broadest and deepest canals in the world.  This was required in order to carry the vessels into Gloucester Dock.

The canal runs parallel to the river and was built to cut out the tidal river and a dangerous area where the River Severn does a big loop around Arlington.

We soon reach the parapets for the Severn Railway Bridge.  This bridge opened in 1879 to carry coal from the coalfields in the Forest of Dean across the river from Lydney to Sharpness.  Unfortunately the amount of coal transported was not as high as anticipated and the single track railway was barely viable.

There were 21 spans to the bridge causing some challenges to vessels using the river with a number of incidents when the bridge was struck and vessels sank with the loss of life.  There are also reports of RAF Spitfires flying below the arches, eventually the RAF court martialed individuals involved in this practice which proved sufficient deterrent to others.

Tragedy struck when on 25th October 1960 two barges overshot Sharpness Dock due to thick fog. The barges collided and smashed into a bridge pillar causing a partial collapse of the bridge. One barge, carrying petroleum, caught fire and exploded, the other vessel had a cargo of black oil that ignited.  A significant fire ensued and five people lost their lives.  It was decided that it was uneconomical to repair the bridge so the whole bridge would have to be demolished and by 1968 it was all removed.

The tower on the towpath side of the canal used to house a steam engine which drove the mechanism for opening the swing section of the bridge over the canal to enable tall vessels to pass.

We continue along the towpath and reach a milestone indicating that it is 15 miles to G (Gloucester) and 1 from S (Sharpness).

There is little traffic on this stretch of the canal and few barges are moored beside it.  Approaching Purton there is a sign to the Purton Ship Graveyard.  An information board explains that from 1909 to 1965 unwanted vessels were beached on the foreshore of the River Severn and allowed to fill with silt.  This was done to stop the erosion of the river bank endangering the canal.

There are said to be 86 vessels beached here, with some on top of others and difficult to distinguish.  To assist there are small plaques providing information on some of them.

It is low tide and the wrecks of Arkendale H and Wasdale H, the two barges that collided with the Severn Rail Bridge, can be seen still lying in the middle of the river.

This is a fascinating spot and we wander around for a while, but I think a couple of hours is really needed to take in all the maritime history here.  As we head back to the canal there is a monolith with a list of vessels wrecked here.

We continue past some canal side cottages and then two swing bridges close to the village of Purton.

We now have a two and a half mile section on the canal as it heads through open countryside.  It is very tranquil and very few others are out enjoying the scenery.  To our left on the banks of the River Severn I spot a World War II pillbox.

As we near Patch Bridge there are more boats moored besides the river.

We leave the towpath at Patch Bridge and cross the swing bridge.

I offer Lynnie a pot of tea at the cafe besides the canal, but much to my surprise she declines.  We walk by the Tudor Arms pub, which appears very busy and has a caravan park behind it.  Our route now involves a bit of road walking, but these are quiet lanes so we are not going to be bothered by too much traffic.  We head away from the canal on Kingston Road, this passes the carpark for Slimbridge Nature Reserve.

After crossing Gilgal Bridge the lane becomes Slimbridge Lane and we stay with this to pass the entrance to the Ernest Cook Trust – Redwood Outdoor Learning  Centre.  This site is used to provide children and young people with opportunities for outdoor learning.  After a mile on Slimbridge Lane we reach a junction where we turn right on Riddle Street following a signpost to Purton and Hinton.  A couple of hundred yards along the lane, we take a footpath on the left besides the Parish Council notice board. We are now on Lip Lane and this soon becomes a grassy track and then a clear path.

The track leads to a minor road where we turn left and pass a row of cottages in Brookend and walk steadily uphill to reach the Lammastide Inn.  Sadly this pub has recently permanently closed after the long term landlords decided it was not economically viable to continue.  Let’s hope they find someone willing to take it on and make a go of it.  I cannot recall previously seeing a pub with this name, so later look it up and discover the Lammastide was the festival of wheat harvest, thus explaining the sheaf of wheat on the pub sign.