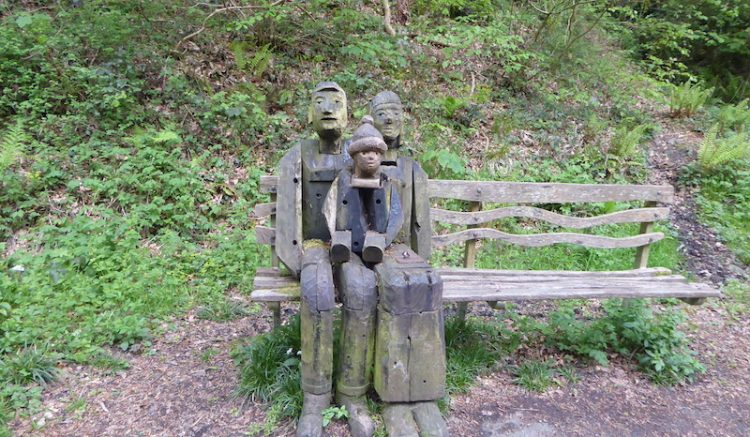 On our last visit to Seabreeze CL in September 2017 I went for an interesting walk along a section of the Tarka Trail from Great Torrington.  On that occasion Lynnie didn’t join me, instead she had a wander around Bideford.  I have enticed her to join me today with the promise of ice cream from the Hockings’ van that parks at Great Torrington common.

Followers of my blog will know I have a penchant for “Bagging” trig points.  Lynnie thinks it is a tad obsessional, but is happy to join me as long it doesn’t involve climbing over fences or a significant detour. Lynnie much prefers to “bag” ice creams and in particular Hockings Ice Creams and has yet to visit this one at Great Torrington.

So the starting point for our walk is the car park at Great Torrington Common, on the edge of the town.  Before I have even stopped the car engine Lynnie is out of the blocks and away.  Too often she has fallen for the “buy an ice cream on our return” line, only to find said ice cream outlet closed. Ice cream safely in Lynnie’s mitts we head northwest across the Common gradually descending towards the A386. 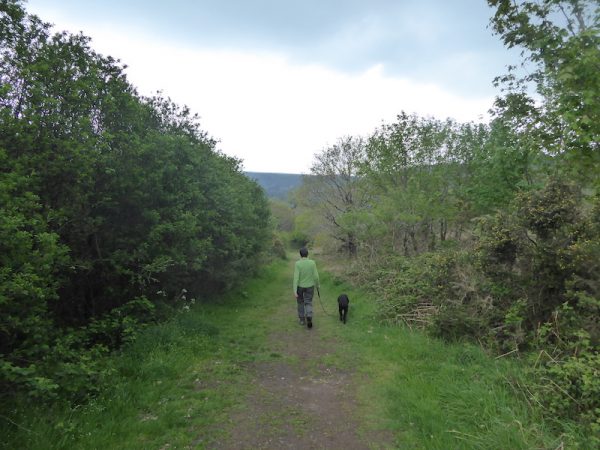 As we reach the road we turn right on a track and then take a left to cross a stream, keeping to the left along the base of Furzebeam Hill. 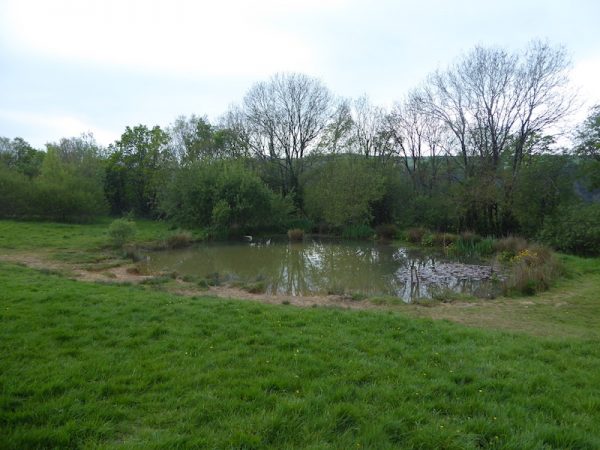 We then continue on the footpath that follows the route of the disused Rolle Canal.

Construction on this canal commenced in 1823 and was financed by John Rolle, 1stBaron Rolle (1750-1842).  The canal ran from the River Torridge at Landcross to Rosemoor near Great Torrington. 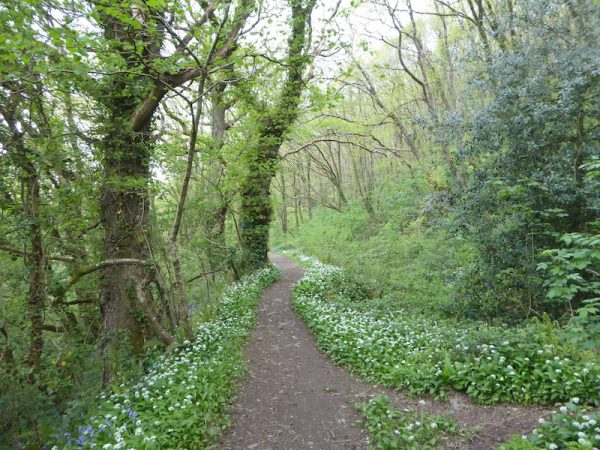 The section we are walking along is an outstanding piece of engineering.  An information board explains it was cut into the side of Furzebeam Hill, thereby limiting the need for expensive locks. In order to reduce the amount of water required the canal is very narrow, only single width.   The whole canal was built by hand and took about two and a half years to complete; it is a pity there is so little of it left to see. 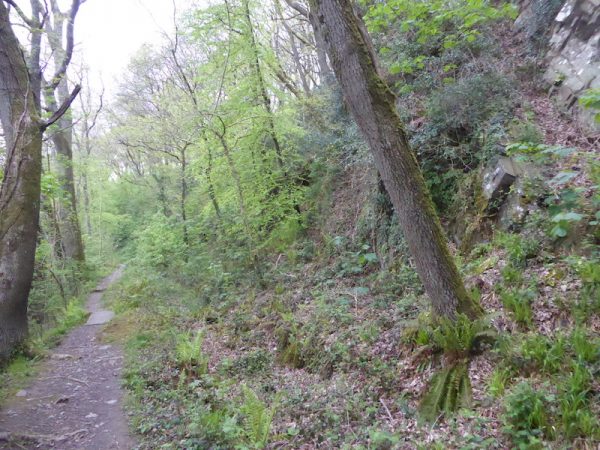 We reach Beam Bridge, this was the route across the canal to Beam House, the secondary home of the Rolle family, their main residence being Stevenstone on the southern side of Great Torrington. 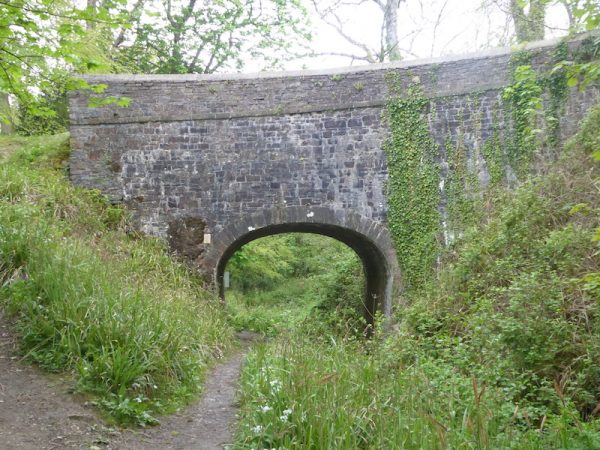 Just a bit further along the footpath we join the Tarka Trail and turn left back towards Great Torrington.  This is the route of the old Southern Railway line, which operated from the 1870’s until closing to passengers as part of the Beeching cuts in 1965, but continuing as a freight line until 1982. 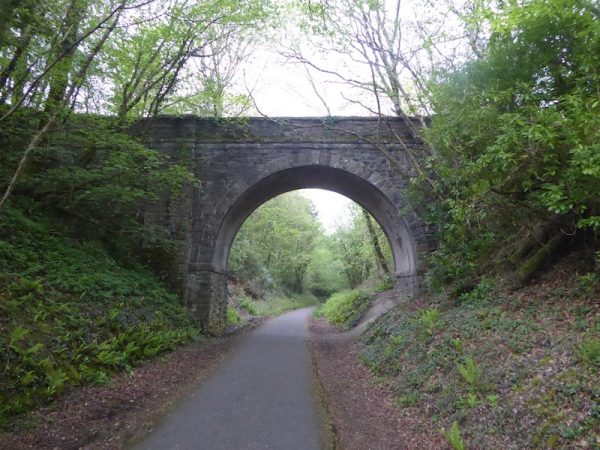 We soon reach a bridge over the River Torridge, with Beam Weir to the right and very soon another bridge.   This weir features in Henry Williamson’s novel Tarka the Otter as one of the otter’s favourite haunts. 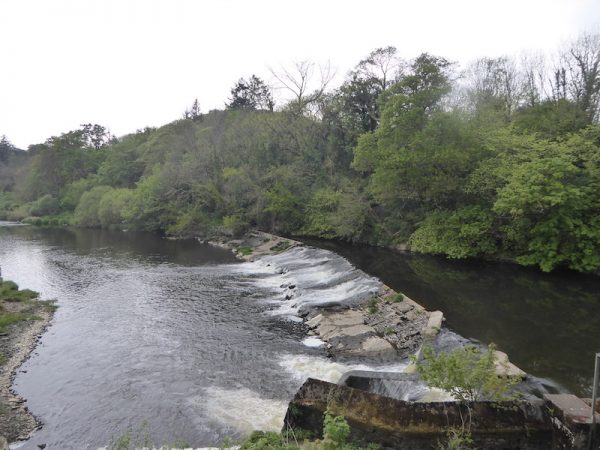 Further along we reach the old Great Torrington Station, with its Puffing Billy café in an old railway carriage.  It was from this station that two milk trains travelled to the United Dairies creamery at Vauxhall and the Express Dairy at Morden, this ceased in 1978. 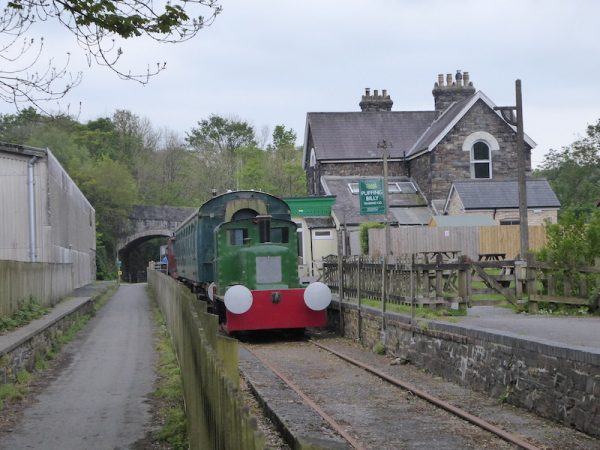 We pass through a tunnel under the road leading to Rolle Bridge to reach another bridge over the River Torridge, looking back to our right we can see both the Rolle Bridge and Rothern Bridge.   The latter is a 15thcentury bridge, which carried traffic across the Torridge prior to the construction of Rolle Bridge in 1928.  The demolition of Rothern Bridge was proposed but thankfully it was saved for future generations to enjoy. 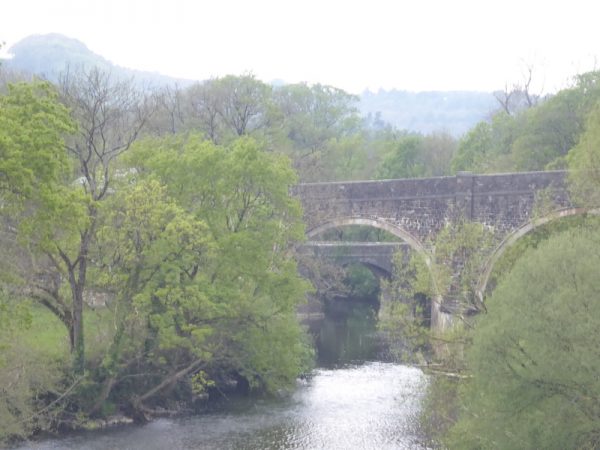 The route is now very straightforward and follows the bed of the old railway track. Dotted along the way are some interesting benches with woodcarvings that have undergone some restoration since my last visit. 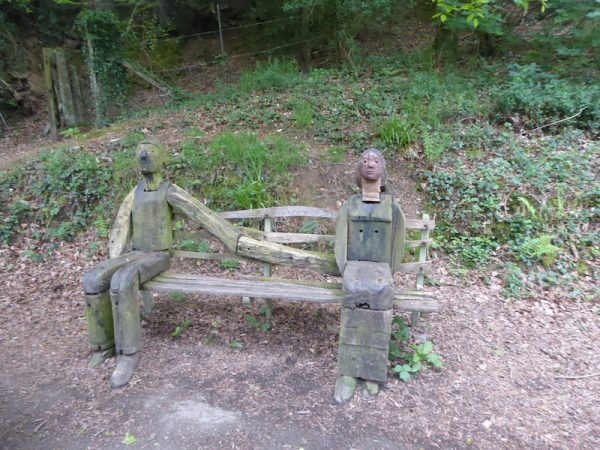 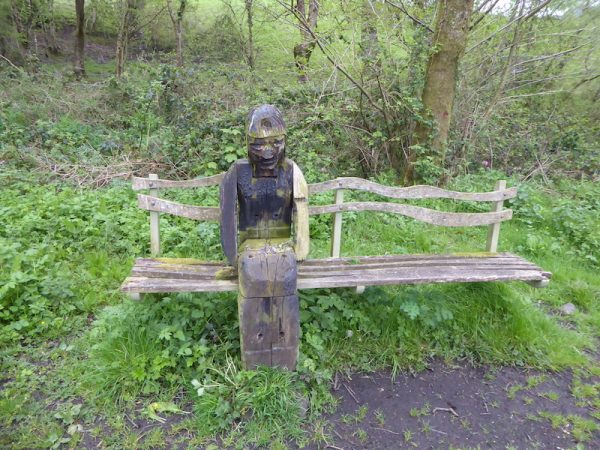 We reach Watergate Halt station, a remote single platform where locals could board the train. 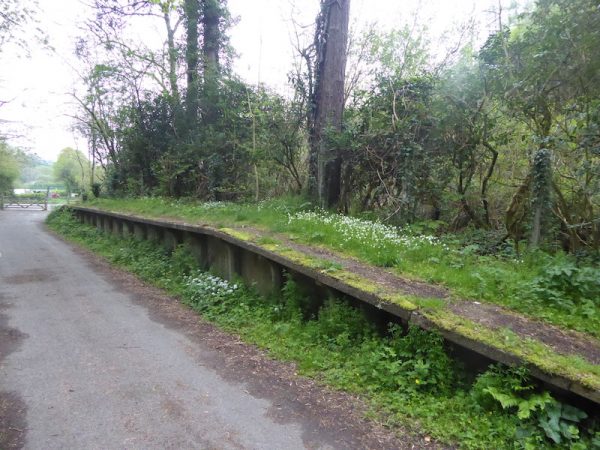 Here we leave the trail and turn left crossing Watergate bridge to take a minor road that forks to the right.  We proceed steadily uphill enclosed by hedgerows abundant with pungent wild garlic. 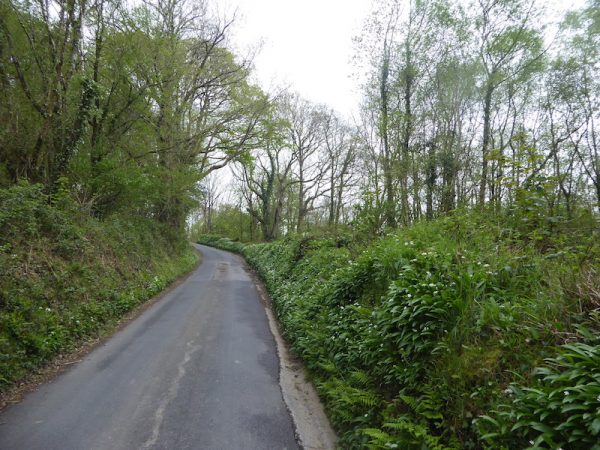 On reaching Five Lane End we turn left and follow the minor road towards Taddiport. At the next junction we fork left heading downhill, then at the next junction we fork left again and follow the lane steeply downhill into Taddiport. This is an interesting place close to the River Torridge; in the Middle Ages it was a leper colony.  I spot an old water pump in the wall close to the village hall. 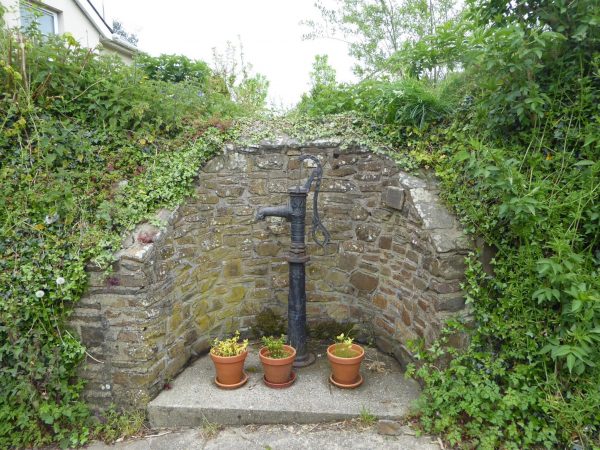 Turning right at the church that was known as the Lepers Chapel we cross the? continue through the village towards the River Torridge. 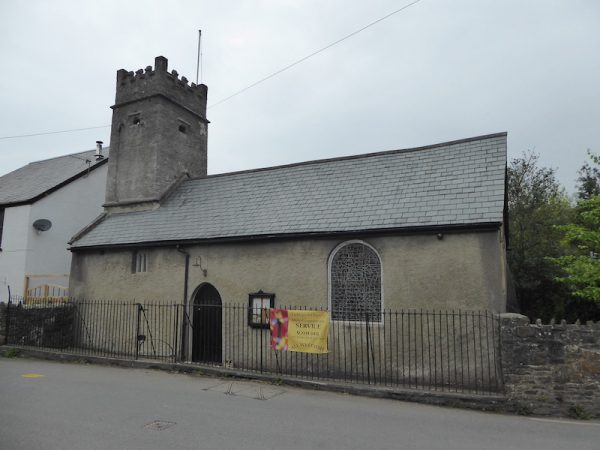 Crossing the river we then huff up the steep Mill Hill. 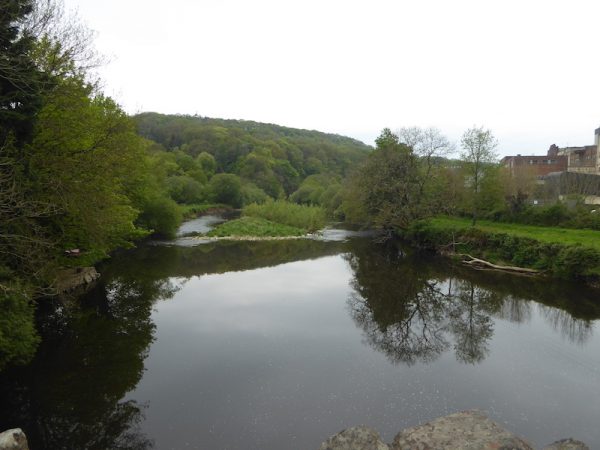 We are now in the centre of Great Torrington.    This is an attractive old town with a number of fascinating features and a place of historic relevance.  Back in 1646 it was the site of a key battle in the south western campaign of the First English Civil War.  Sir Ralph Hopton, the south west commander of the Royalists advanced into Devon with over 2,000 men on foot and 3,000 on horse back and took up occupation in Torrington.  On the 16thFebruary 1646 Sir Tomas Fairfax approached with his Parliamentarian Roundhead forces and a bitter battle ensued with the Roundheads victorious and thereby quashing the Royalists in this part of the country.

In the High Street is an attractive water fountain.  Apparently this was gifted by the lord of the Manor, Henry Rolle in August 1870. 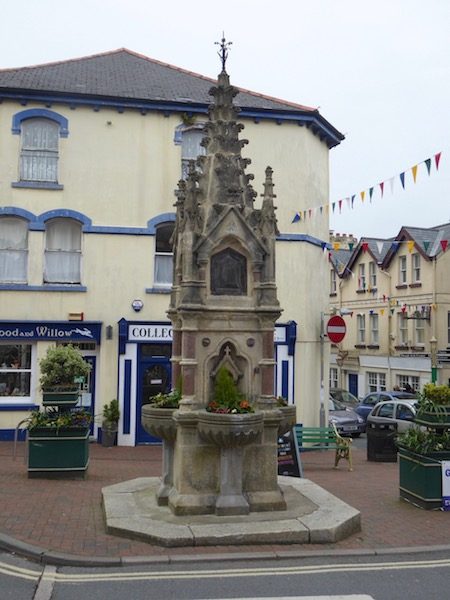 As we wander up the High Street preparations are underway for the annual Mayfair and Carnival.  This event has been held in the town since the 16thcentury, I can only assume that the 1646 Mayfair was a solemn occasion.  However, I believe these days there is much drinking and frivolity over the days of celebrations.

We wander back through the town to reach the common and our starting point; we have covered seven and a half miles.  Just as we are about to leave the car park I spot an Ordnance Survey Fixed Bench Mark. These marks are equally important in mapping the country.  These days the network of around 6,000 trig pillars are no longer used, but fixed bench marks are still part of the mapping system. 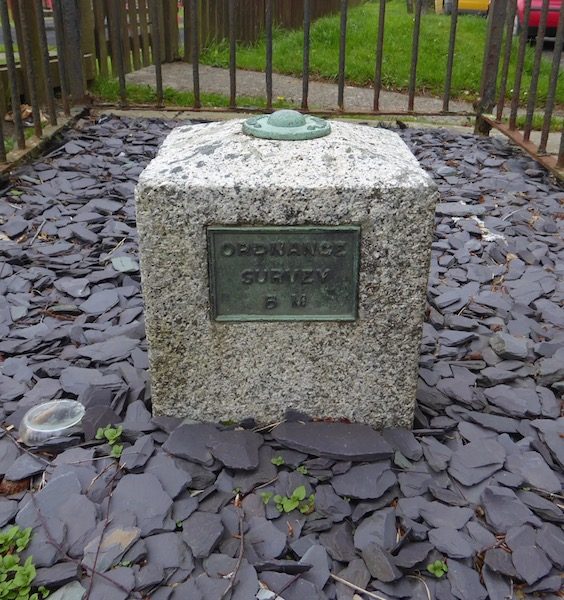