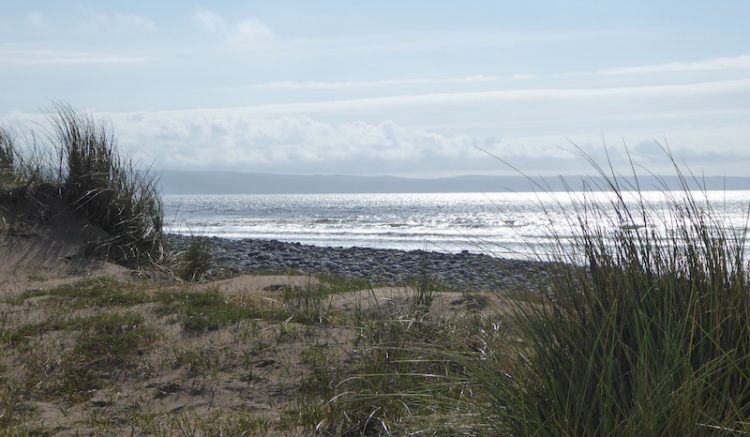 We have decided to walk from the caravan today, one of the advantages of being at Seabreeze CL is its close proximity to the Northam Burrows National Park and we plan to walk around it to visit Westward Ho! In so doing Lynnie can “bag” another Hockings Ice Cream van.

Leaving the CL we turn left and take the next left to follow Burrows Lane onto the Burrows. We are soon admiring the view back towards Appledore. 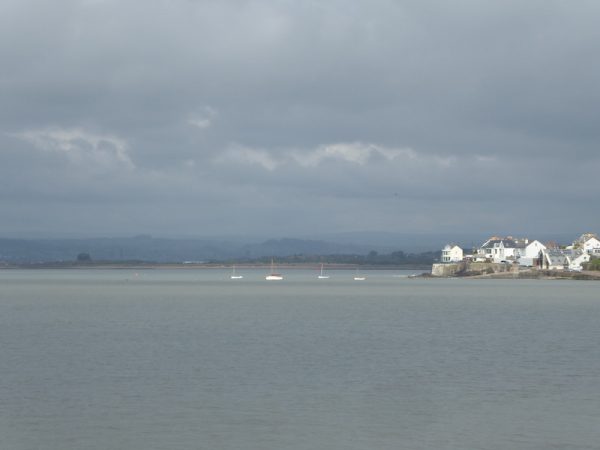 A network of paths cross the Burrows, but we stick to the route of the coastal path running close to the Taw and Torridge estuary. 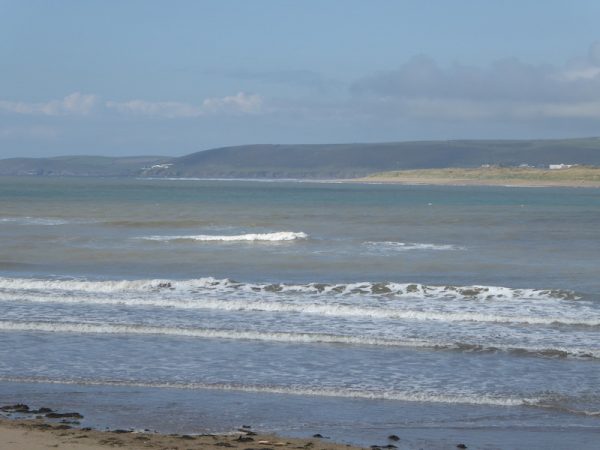 As we turn at the headland we start to encounter areas where the footpath has eroded causing the Royal North Devon Golf Course to alter a few holes to compensate. 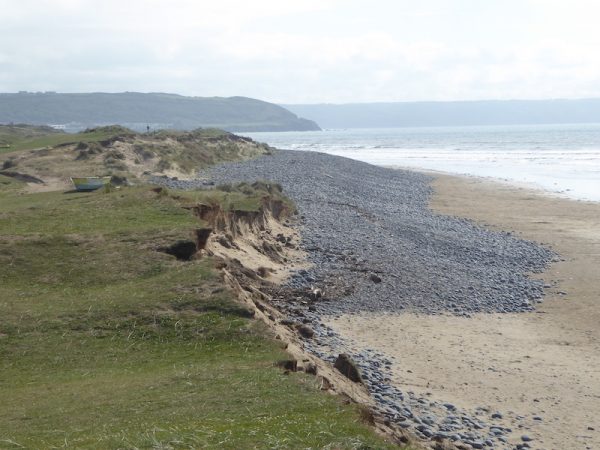 What is even more alarming is part of the Burrows is actually an old 1940’s landfill site which ceased to be used in the 1950’s.  There is rightly much local concern as to the lack of sea defences and the potential environmental and health risks associated in the sea eroding further into the landfill.  It is a stark lesson that disposal of waste leaves a legacy for future generations and every effort should be made to safeguard against risks so they do not have to clear up our mess!

It is pleasant walking along the coastal path, not too windy and it looks as if there is little chance of rain. 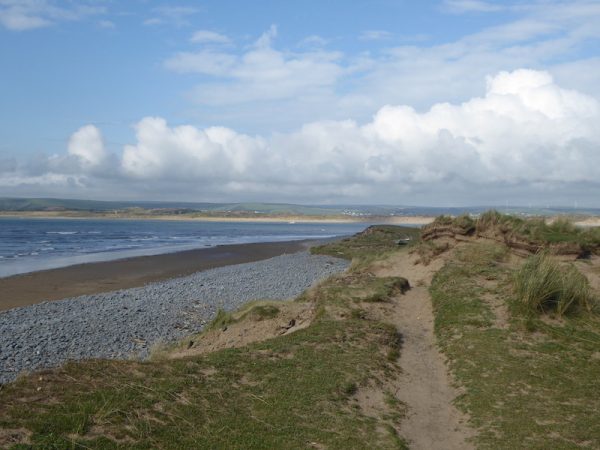 It is surprisingly quiet as we pass the inland water at Sandymere and join the track heading towards Westward Ho!

Westward Ho! is an interesting place that gets its name from Charles Kingsley’s 1855 best selling novel Westward Ho! set near Bideford. The Northam Burrows Hotel and Villas Building Company saw an opportunity to exploit the books popularity and they built a hotel close to Northam Burrows calling it Westward Ho! Hotel, then as other properties were developed in the area the village acquired the name.

As every quizzer knows Westward Ho! is also the only place in the British Isles to have an exclamation mark in its name.

We know that on the seafront at Westward Ho! there will be a Hocking’s Ice Cream van but much to Lynnie’s delight there are two! This will be interesting to see if she can resist visiting both. 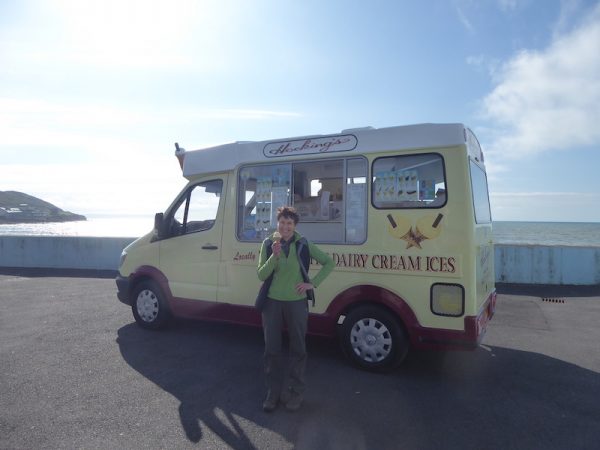 We continue along the seafront, the tide is out and we can see the Rock Water Swimming pool, created by the Victorian’s when Westward Ho! first became a holiday resort.  It was refurbished in 2003 but closed again in 2014 and now there are warning signs about its safety.  It such a pity that our modern society is so focussed on the future that it fails to maintain these social amenities. 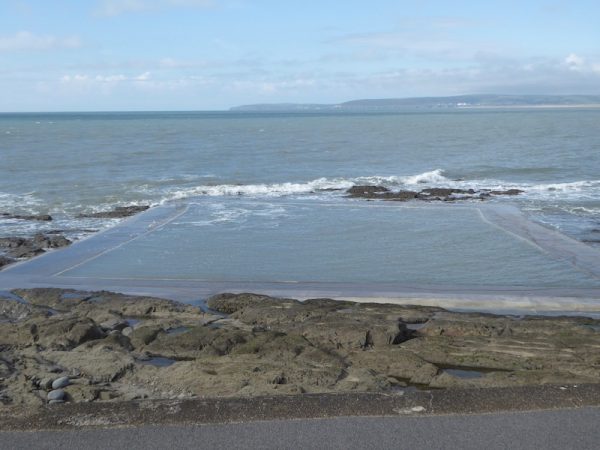 When Government’s talk about austerity what they really mean is that they do not have the political will to raise tax, (or pursue those evading tax), to a level that would provide the basic health, education, social services and public amenities that any self-respecting society deserves.

We continue along the coastal path heading towards Kipling Tor.  Lynnie’s mother lived in Bideford as a young woman and this was one of her favourite spots.  So on reaching the benches overlooking the bay we sit and look out at the view that she often talked about. 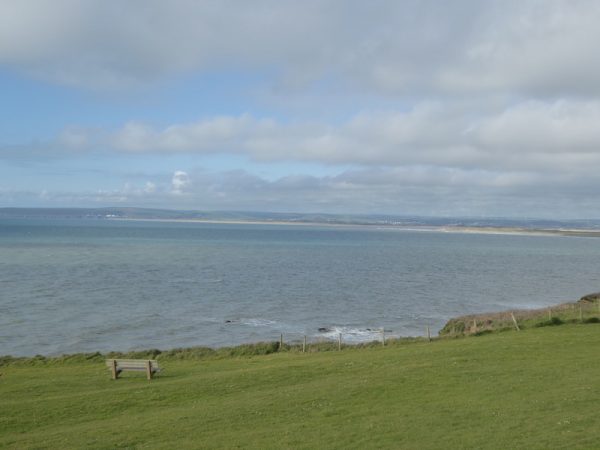 Resuming our walk we wander back down towards Westward Ho! and pass the site of the old Westward Ho! pier.  The idea for a pier was first conceived in 1864 when the Northam Burrows Promenade and Landing Pier Company was formed.

Work commenced in 1870 and it was planned to be 600-feet long and at the pier head would be a bandstand and refreshment room.  Apparently the design was also used for the slightly longer pier at Hunstanton in Norfolk.

Construction was slow due to difficult sea conditions but in July 1871 the first landing was made on the unfinished pier.  However, only a few months later in October 1871 gales struck the pier resulting in all but 150 feet being destroyed.

It was then agreed to rebuild the pier, reducing the length to 493 feet.  It was finally completed on 24thJuly 1873 but only lasted until February 1880.  Then storms again damaged the pier, this time they decided not to rebuild and the pier closed for good. 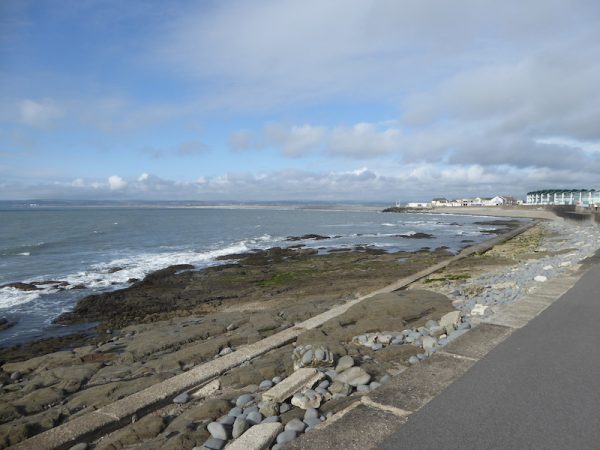 We wander back along the promenade with Lynnie resisting the temptation to have a second Hocking’s ice cream.  We re-enter the Country Park this time keeping to the southern edge.  This involves crossing a couple of inlets full of water before passing the Clubhouse of the Royal North Devon Golf Course. 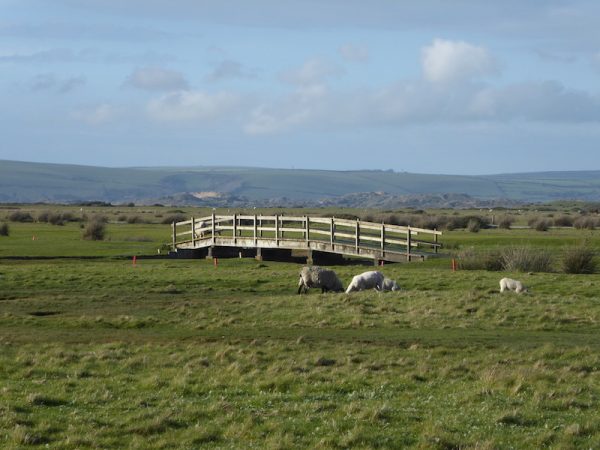 After crossing the tarmac lane we continue on alongside the Pill to reach Appledore Bridge. 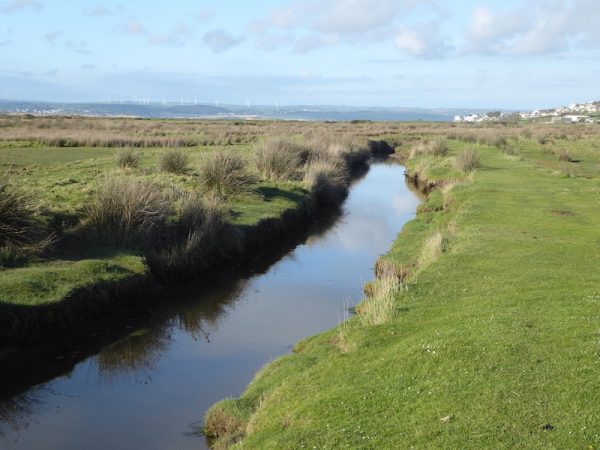 From here we return along Burrows Lane arriving back at Seabreeze CL we have covered seven miles, about far enough for Dexter at the moment.

To view this 7 mile walk on OS maps Click Here