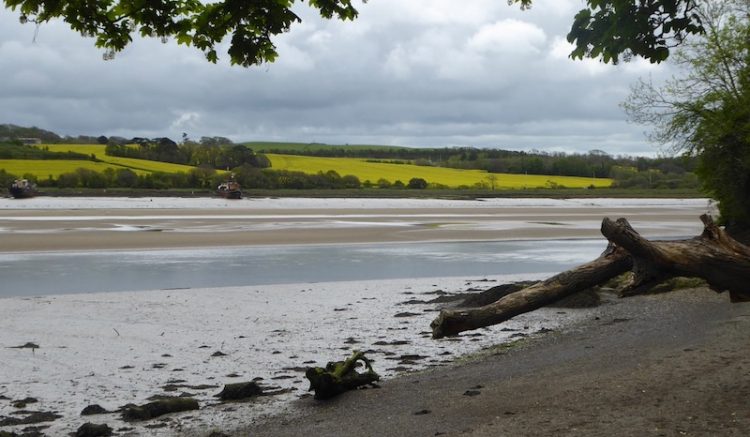 Today I am walking from Seabreeze CL, unfortunately, these days Dexter cannot walk far on consecutive days, so he is going to stay with Lynnie and relax whilst Crosby and I go in search of another trig point.

Leaving the site I turn right and then almost immediately left into Primrose Lane. This is a very narrow country lane that a couple of years ago I mistakenly used when arriving at Seabreeze towing the caravan.  It was a hairy couple of minutes, a mistake I will not make again, and we were fortunate not to meet anyone coming in the opposite direction.

I stay on the lane to reach the cross roads with the A386 and go straight over into Wooda Lane, following this to reach a finger post on the right for the South West Coastal Footpath. 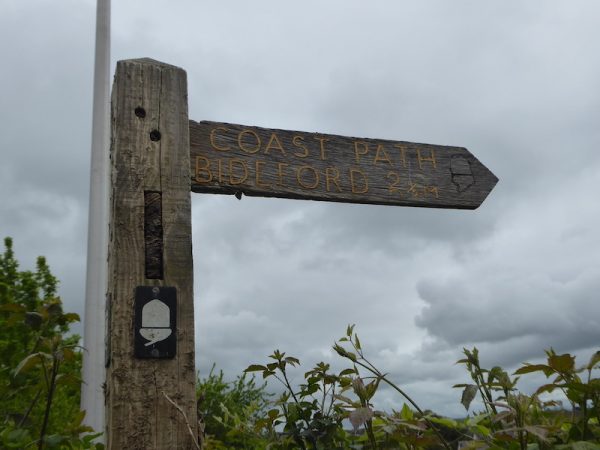 I follow the coastal path towards the River Torridge and then turn right towards Bideford. 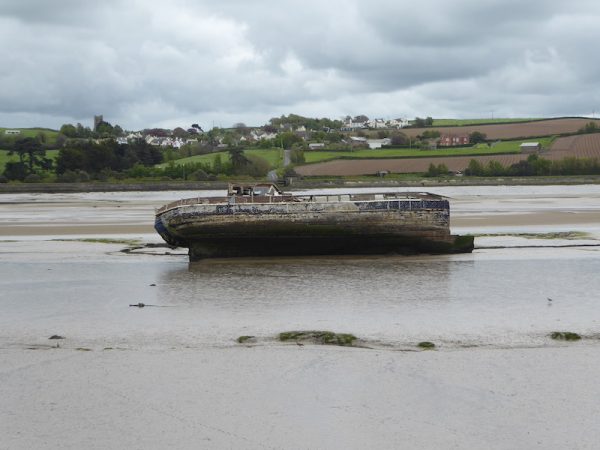 I now stay with the path that hugs the coast, ignoring all other paths leading from it, to reach Cleave. 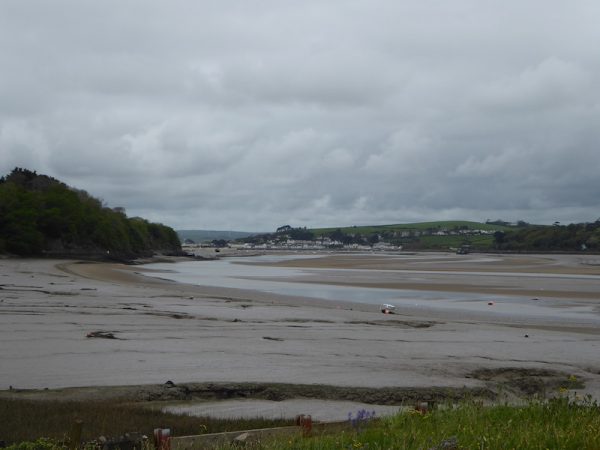 Here I pass under the Torridge Bridge, built in 1987 this 650 metre long concrete bridge won the Concrete Society Award in 1988.  I had no idea there was an organisation called the Concrete Society, and a quick look at their website shows an event in July called the International Structural Waterproofing Conference.  In my working days I used to attend a lot of conferences, and spoke at a few, and there is always that moment during the day when you struggle to stay awake.  If allocated the after lunch slot half the audience appeared to be asleep!  I am sure Structural Waterproofing is important and interesting to some, but it does not grab my attention. 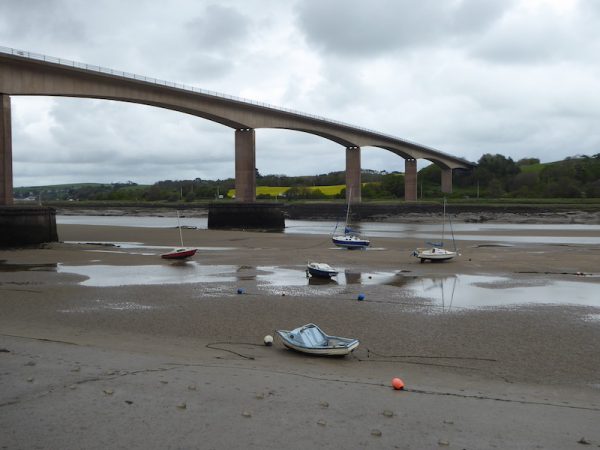 The route now goes through a housing estate, passes the council offices and then heads past Victoria Park to reach the statue of Charles Kingsley.  According to the Town Council’s website Kingsley arrived in the town in 1854 and hired a house at the end of the Strand. It was whilst staying here that he wrote his best selling novel Westward Ho!, the popularity of the book led to a boom in the local tourist industry and the eventual creation of Westward Ho! as a Victorian holiday resort.

To honour the role that Kingsley played in promoting the town the Council  decided in 1903 to erect a statue of him and in 1906 it was unveiled. 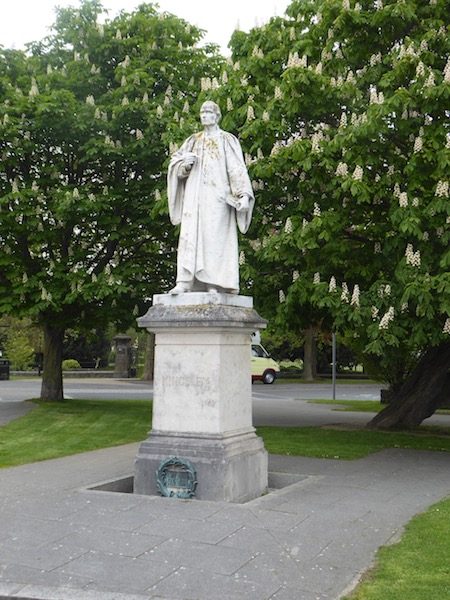 I continue along the river to the medieval Old Bideford Bridge, or Long Bridge, it has 24 arches spanning 677 feet across the River Torridge; it is thought to be one of the longest remaining medieval bridges.  The bridge was widened in 1865 and 1925, but was struck by disaster on 9thJanuary 1968 when a combination of heavy rain and high tide led to a couple of bridge arches collapsing. 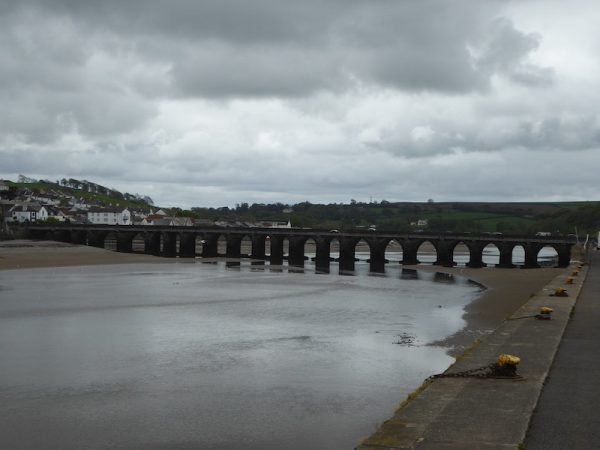 On the Town Council building close to the Bideford end of the bridge I stop to read the memorial to those claimed to be the last women in Britain hung for witchcraft.   Temperance Lloyd, Susannah Edwards and Mary Trembles all from Bideford were tried for witchcraft on amazingly scant evidence, for example by causing a Magpie to fly through a window. However, at their trial at the Devon Assizes in Exeter they all pleaded guilty and were executed at Heavitree in Exeter in 1682. 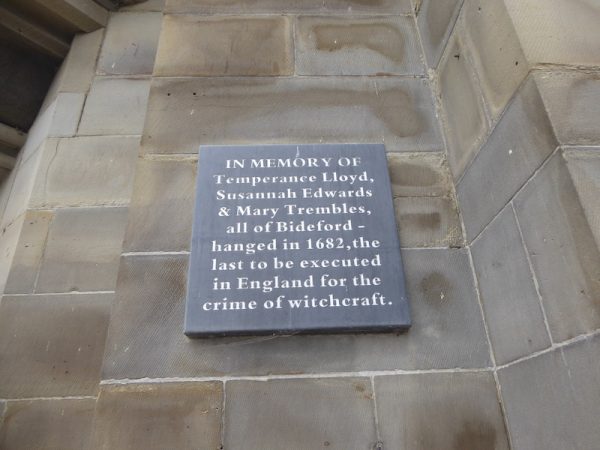 I continue to walk besides the River Torridge to reach the Old Ford house a 16thcentury building standing close to the site of the original ford used for crossing the river before the first bridge was built in the 1200’s. 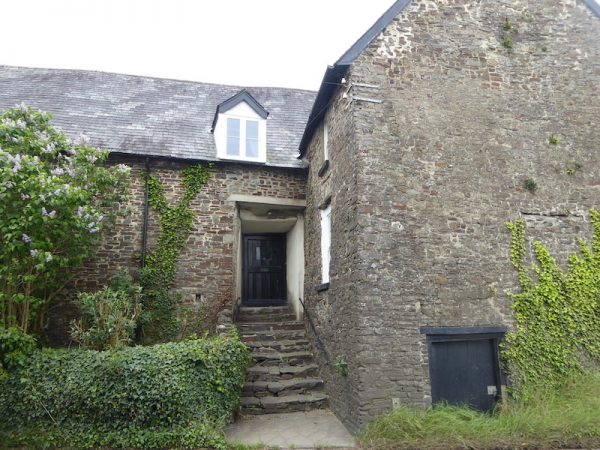 I continue out of the town on the pavement besides the A386 and then take a right turn into Ford Rise and then almost immediately take a left into Upcott Hill.  My route now follows this quiet county lane as it heads uphill and passes the hamlet of Upcott. 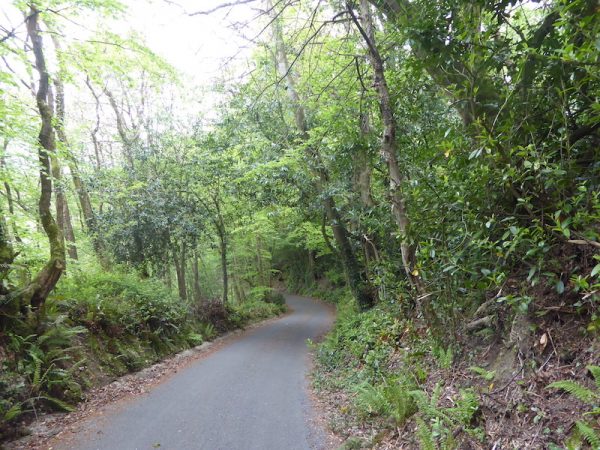 At a junction I continue in a westerly direction and then fork left to take a tarmac lane, as this swings to the right I go straight on uphill on a track. 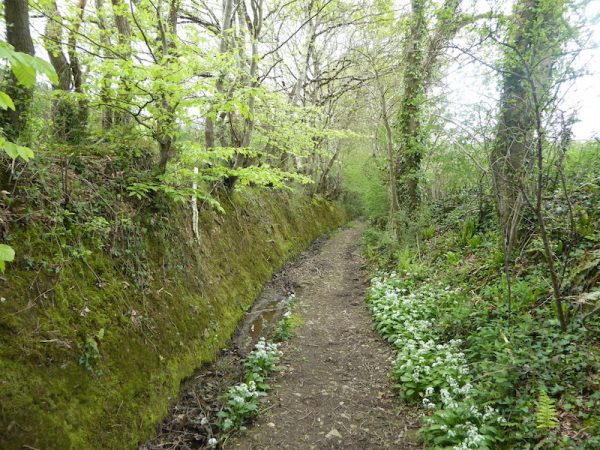 On reaching a minor road I turn right and continue along this lane, staying with it as it sweeps to the right.  There are fine views from here back over Bideford and the River Torridge. 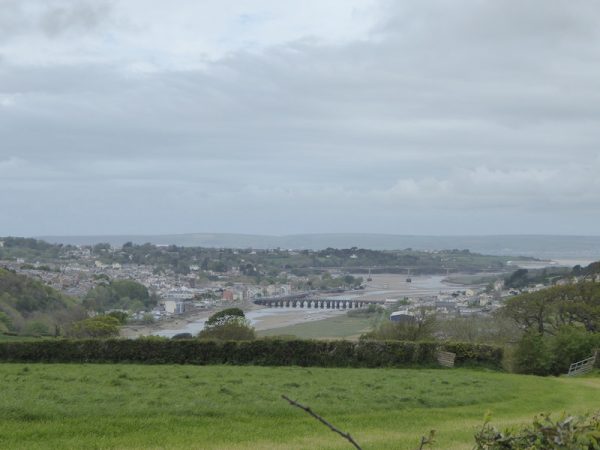 On the brow of the hill, shortly before a farm driveway I spot the trig point that is tucked away in the hedgerow, this is the 135thtrig pillar I have bagged. 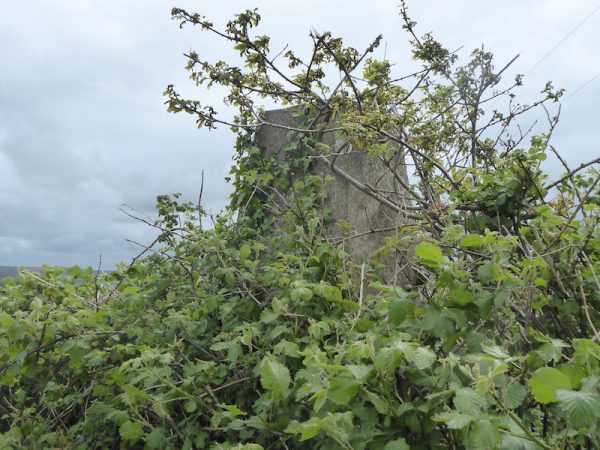 Continuing my walk I stay on the road as it sweeps to the left and proceed  to a T-junction at the edge of Littleham.  I go straight over to take the  footpath that runs besides the recreation ground. 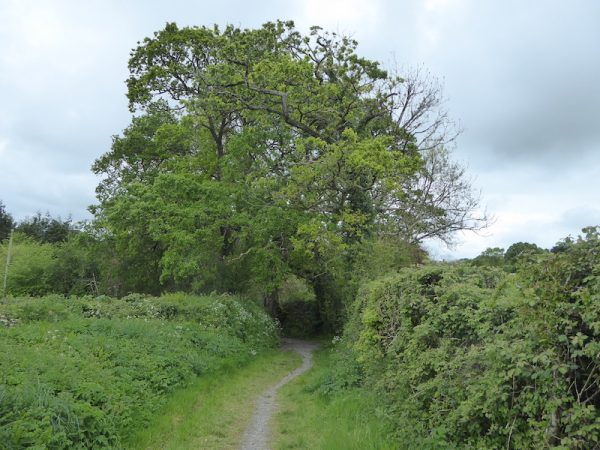 I ignore a path on the right leading through the churchyard, instead taking a route round the grounds of a house to reach a lane heading towards the church.  Here I turn left and follow the lane into the heart of the village.

At a fork in the road I go right and then at a crossroads turn right to head steadily uphill away from the village.  The route is now very straightforward and follows this minor road back into Bideford. 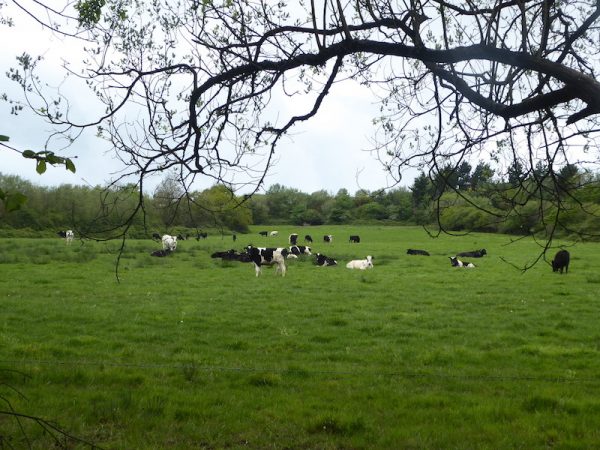 On reaching the town I make for the Pannier Marker, I have not visited before and Lynnie has mentioned that it has an interesting array of shops. Not that I will venture into any with Crosby in tow.  This covered market was built in 1884 and was the centre for buying fish, meat and corn. The section I walk through now houses a range of artisan shops.  I am more interested in the architecture of the building which retains most if its original features. 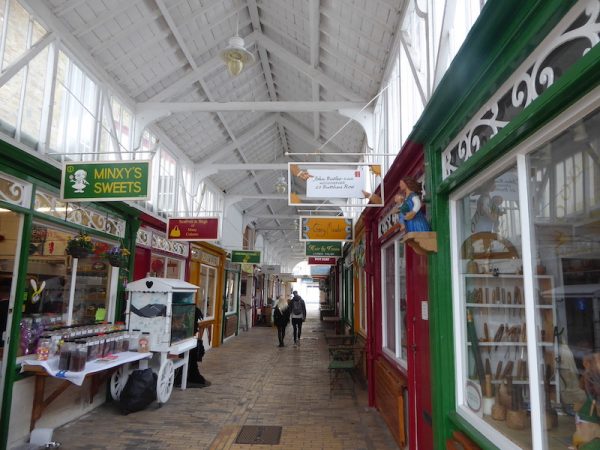 From here I wander into the High Street and then turn down towards the river to retrace my route back to Seabreeze CL.  Back at the caravan my walk has covered close to 13 miles.  Today’s walk had too much walking on roads for my liking; however, they were quiet country lanes with very few cars.