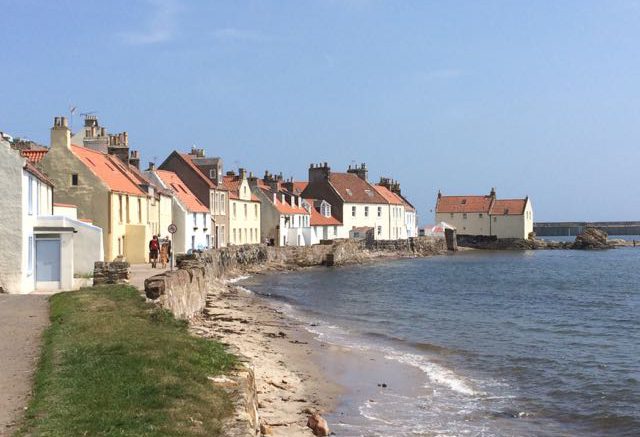 There are many advantages to the lifestyle that Lynnie and I have adopted. One being that we get to spend a lot of time together (which I view as positive; but Lynnie might disagree!). Every week, or so, we wake to a new view from the windows of the caravan and we get to walk a different route everyday. One of the pleasures is discovering new things, everyday there is something new to see, or a conversation that makes us appreciate life.

When I told Dad that we were heading to this part of the country he recommended a visit to Pittenweem, he and Mum spent some time close by many years ago and apparently it was a favourite of theirs. Regular readers will know we rarely drive to the place we are visiting, I prefer to park some distance away and walk to our destination in order to get a real feel for it. So naturally to visit Pittenweem we park at St Monans and walk along the coastal path. 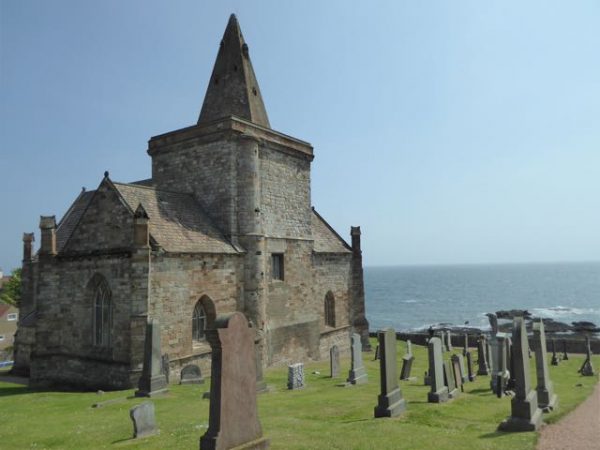 We start our walk from the kirk, apparently this church is the nearest to the sea in the whole of Scotland. Before setting off we have a wander around, it is very close to the sea and as you would expect from its location has a very nautical feel. 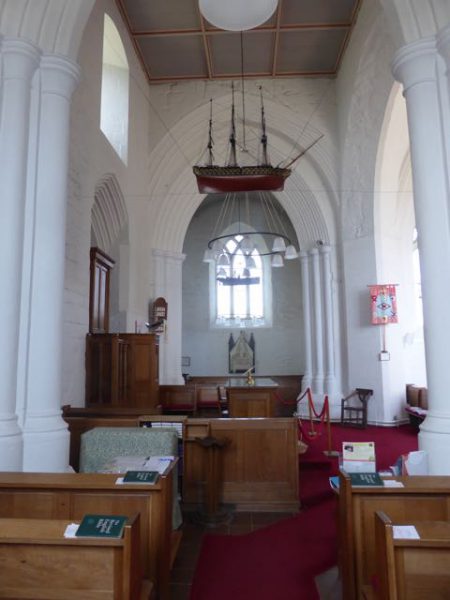 We amble through St Monans and leave heading west on the Coastal Path. We soon get views of the windmill at the old salt works, but there’s a large group of walkers here so we decide to carry on and avoid getting stuck behind them on the path ahead. It’s close to two miles before we reach Pittenweem. I immediately see why Mum liked it so much. 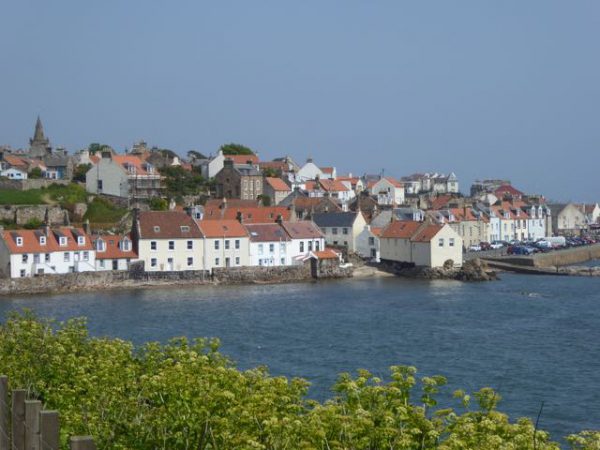 Lynnie soon spots the ice cream shop and is across the road quicker than Usain Bolt, returning with a look on her face that warns the dogs off of her prize acquisition. 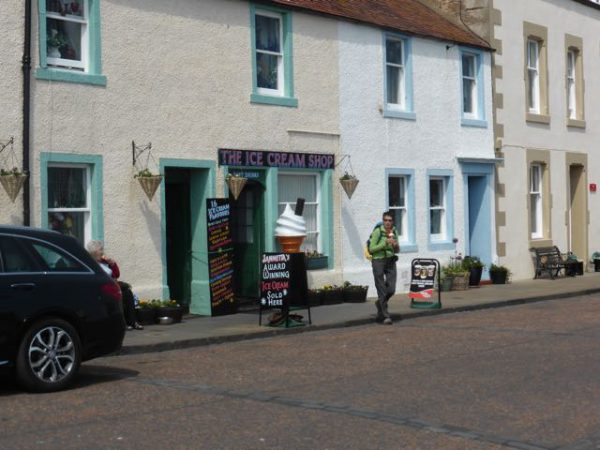 Whilst the Ice Cream is being enjoyed we wander around the harbour. This is still a very active fishing port with trawlers moored up. What catches our eye is the old fishing vessel the Reaper, just pulling into the harbour and mooring. 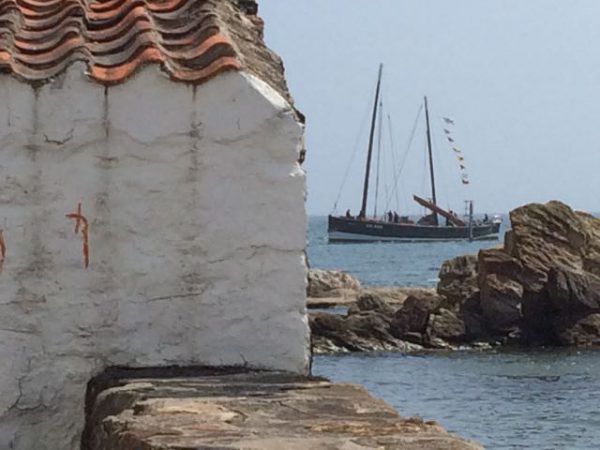 We could spend more time here but there is a chunk of walking to do before we reach our destination further along the coast at Crail. Soon after leaving Pittenweem we walk around the edge of Anstruther Golf Course, the tide is just starting to go out enabling us to find a picnic spot on the rocks. On our travels we have sat in some amazing places to eat our lunch. This has to rank as one of the best. 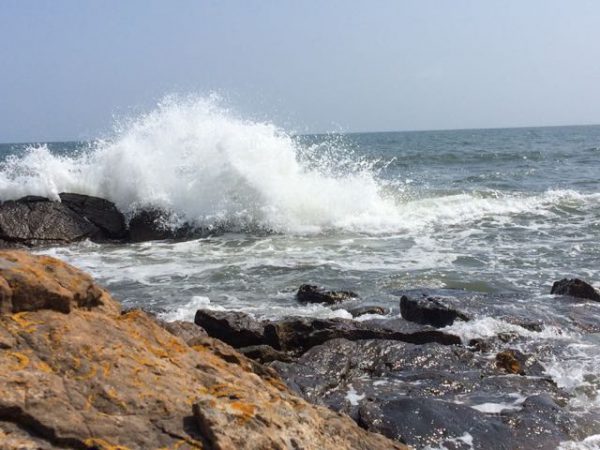 Refreshed we are back following the Coastal Path into Anstruther Wester. The route takes us past some interesting buildings including a couple covered in shells. 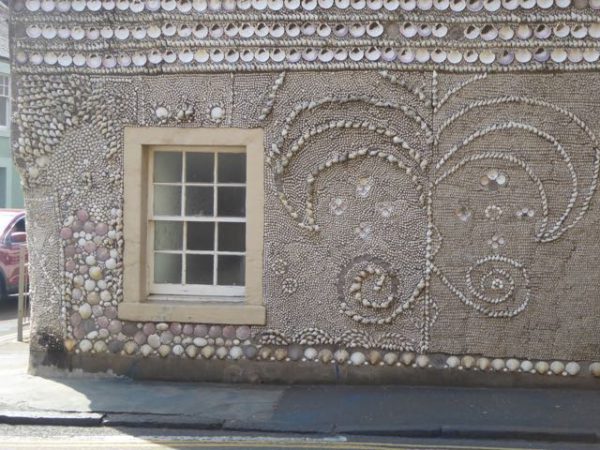 Fortuitously we have arrived on the day of the Harbour Festival, there are loads of folk about. It is difficult to get a feel for the place with the throng of visitors, but the dogs are enjoying picking up discarded chips as we make our way along the harbour wall.

As we approached Anstruther Wester the old fishing vessel we had seen at Pittenweem was chugging into harbour and it is now moored and open for visitors. It is no place for dogs so we take it in turns to do the tour. 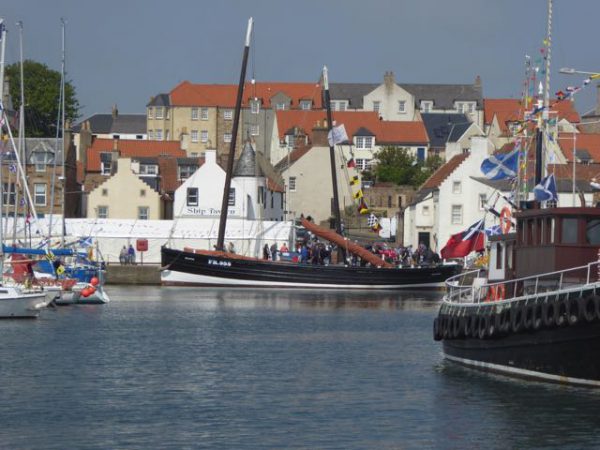 Reaper is a twin masted sailing Fife herring drifter, built in 1902 purely as a sailing drifter she had an engine fitted in 1916, she was used as intended until the outbreak of World War II when she was requisitioned by the Admiralty. At the end of the war she returned to Shetland and was used for fishing until 1957. She then spent time, whilst owned by Zetland Council, carrying general cargo before being purchased by The Scottish Fisheries Museum located here in Anstruther.

From the outside it looks a reasonably large vessel, but once below deck the conditions are cramped and it must have been challenging working here when Reaper was herring fishing. There are a number of folk onboard, but the volunteer crewmembers are more than happy to chat about the boat’s history.

Resuming our walk we continue west on the Coastal Path walking through Anstruther Easter and passing a static caravan park, we are then in open countryside. There is hardly anyone about which is welcome after the crowds of the Harbour Festival. 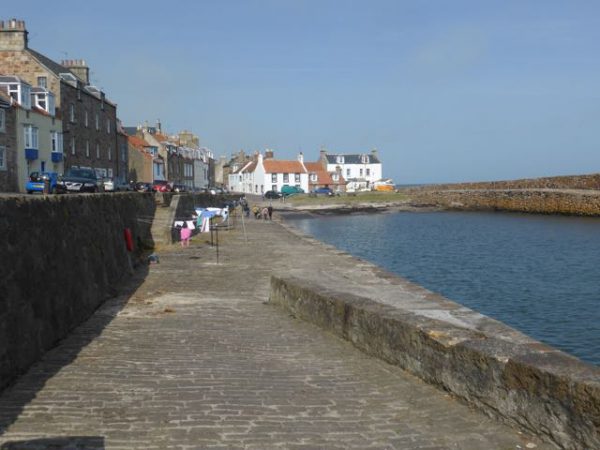 It is a cracking afternoon, just right for walking. No threat of rain, sun shining, warm but with a cooling breeze. We soon reach The Coves; a cave system that was apparently a site of early Christian worship. The caves were made naturally by the sea but later enlarged by people. Before World War II a hermit lived in the most easterly cave, he made the cave entrance secure by constructing windows and doors. On a sunny June day I can see this could be an attractive place to live, but I would not fancy being here when a storm was blowing. 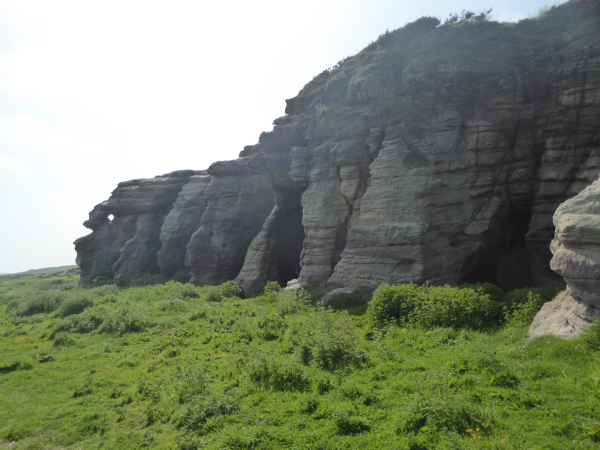 Continuing on we enter Crail and wander down to the harbour. This is a pretty spot, very quiet and peaceful. 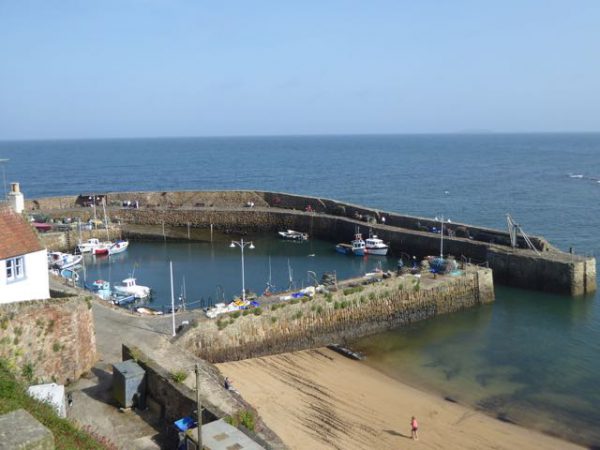 We have a quick look around but need to start back as we have walked eight miles here and now need to cover the same ground heading back east to St Monans.

Leaving Crail, Lynnie cannot resist a go on the swings. 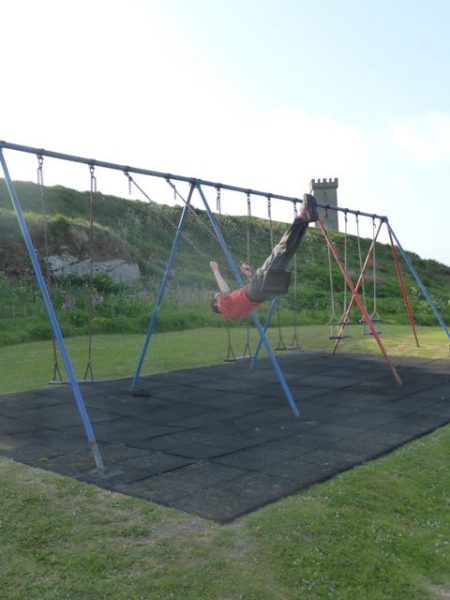 This is a walk where retracing your steps is really interesting, the views are different and the tide has gone out exposing vast areas of rock bed. 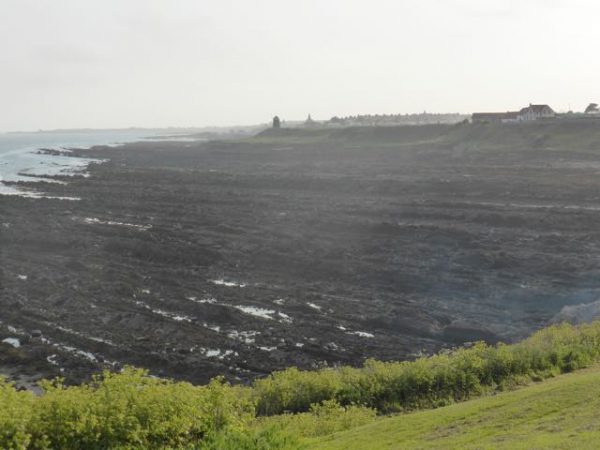 At Anstruther Wester the throngs on the harbour have now formed long queues at the fish and chip shops and as we go through Pittenweem the place is deserted. This feels like a place with a lot of holiday lets and second homes. I can see why such places are attractive to people, but the downside is that they are like ghost towns when it is not the height of summer.

On reaching the windmill on the outskirts of St Monans we stop to for a look around. It is an interesting place; apparently it is the last remaining windmill in Fife. On a sunny evening it looks a lovely spot, but this was once a harsh working environment producing sea salt. 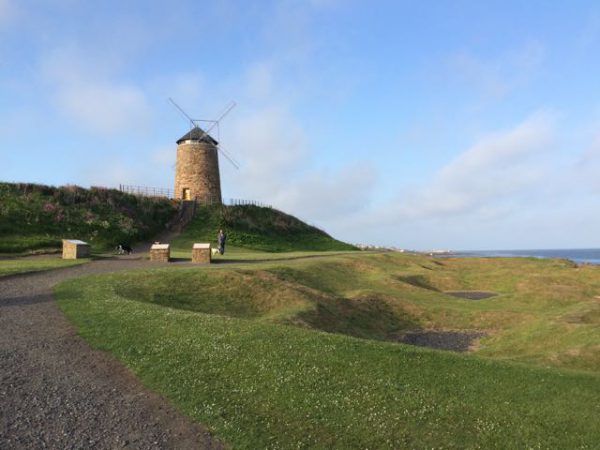 Salt production was a major activity along the banks of the Forth, dating back to medieval times. Shallow seawater ponds were created and the sun then evaporated the water leaving the salt.

In 1753 Sir John Anstruther became the local laird and in 1771 he jointly established the Newark Coal and Salt Company. The coal was extracted nearby at what is now known as Coal Farm and this was used to heat saltpans that were set in nine buildings below the windmill. The locations of these buildings are still visible.

The windmill pumped seawater from tidally fed reservoirs, cut into the rocks offshore, into the saltpans, production was a 24-hour operation employing about twenty men. Tax changes in 1823 made the production of rock salt in England much cheaper and marked the end of much of the production of sea salt on the Forth. Here at St Monans production had already ceased following a fire at the coal mine.

Restoration work on the stump of the old windmill was undertaken in the 1980’s and it is now a valuable reminder of past life in this area. After a look around we head back through the village of St Monans.

Our walk along this section of coastal path totals sixteen miles, eight miles each way. It has been picturesque and full of interest and certainly wetted our appetite to walk more of this coastline so tomorrow we will start at Crail and pick up where we left off. 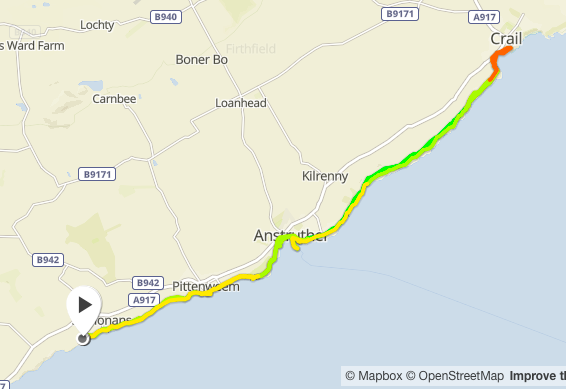