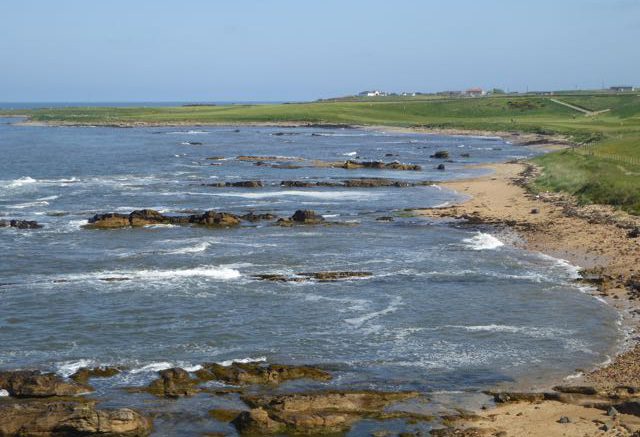 After our enjoyable walk along the Fife Coastal Path yesterday we have decided to pick up where we left off.  We start today’s walk in Crail parking in the attractive broad street at the top of the village and walking towards the coast through a cliffside park.

It is a bright day with good visibility and the Isle of May can be seen clearly.  This island is a nature reserve, owned by Scottish Natural Heritage.  It has two lighthouses, one of which is now a bird observatory and the other designed by Robert Stevenson.  Everywhere in this area we seem to come across things designed by Stevenson, he must have been a busy chap! 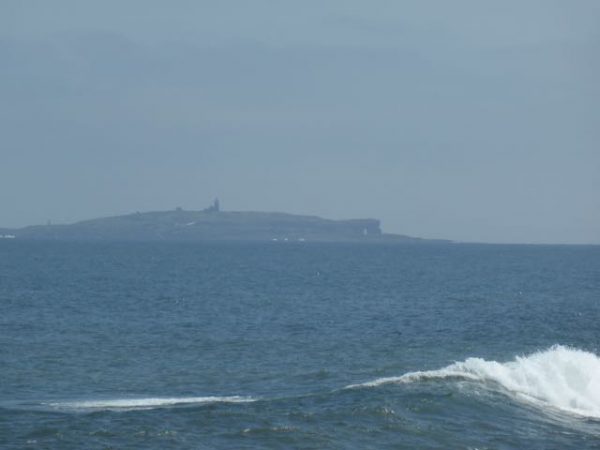 We leave Crail via a very large static caravan park with pitches looking out to sea, some right on the edge of the shoreline.  Definitely not the sort of place to be when there is a howling storm.  This is a rocky bit of coastline with anglers on the outcrops and on some of the larger rocks folk taking advantage of the afternoon sun. 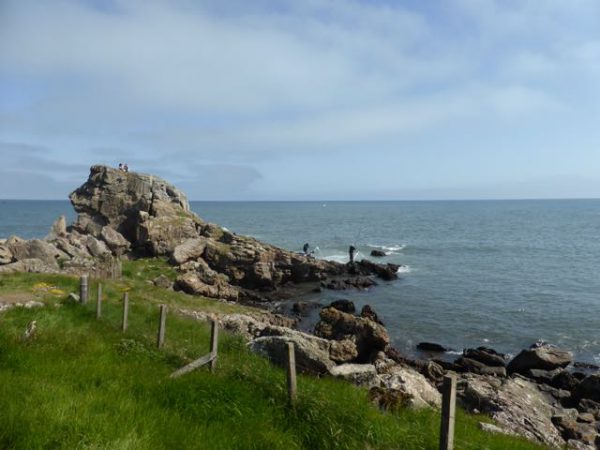 We head towards Fife Ness Lighthouse, not a traditional looking lighthouse but a powerful lantern in a low building on the shoreline.  We have to clamber around the edge of this on a path that takes some negotiating with the dogs. 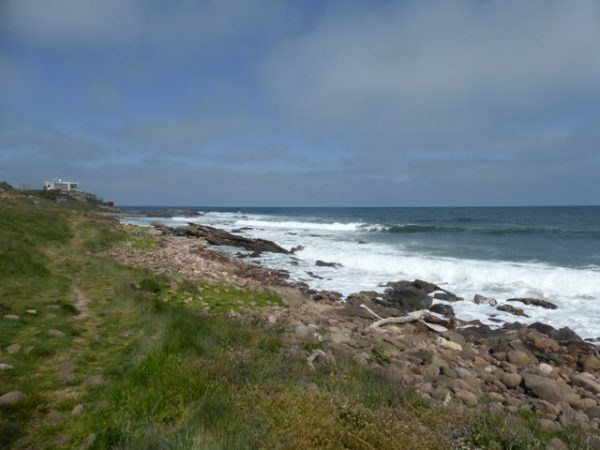 Around the corner it is easier walking, we are now where Fife Ness harbour was situated. 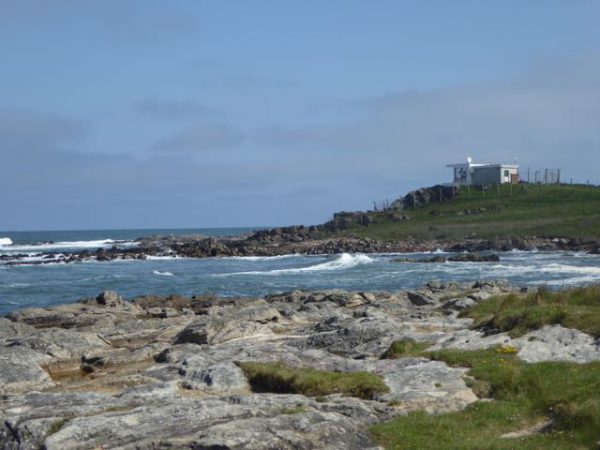 It does not look much like a harbour now but the information boards state that records of a harbour go back to the 16th century.  It was used for fishing for a couple of hundred years and was then converted to a construction yard for lightships that guided shipping before the present lighthouse was built.

We are now on the edge of Balcomie Golf Club and follow the coast closely until we reach Constantine’s Cave, according to local legend (heavily disputed) King Constantine I was killed in this cave following a battle with the Dughgall (dark foreigners or Danes) in 874. 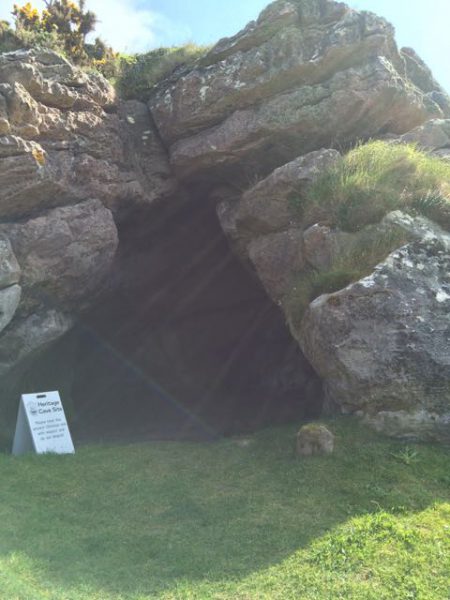 The path now follows the edge of the golf course with the occasional diversion onto the beach.  On one of the beach sections I pick up a brand new Titleist ProV1 golf ball.  If there is golf ball I would like to find this is the one!

In places the path follows the shoreline below cliffs and you are advised to only tackle them at low tide.  There appears to be no alternative route and despite the freedom to roam in Scotland the fields are heavily protected with barbed wire fencing. I am not entirely sure what happens if you reach this point at high tide, presumably you have to wait until the tide recedes or turn back. 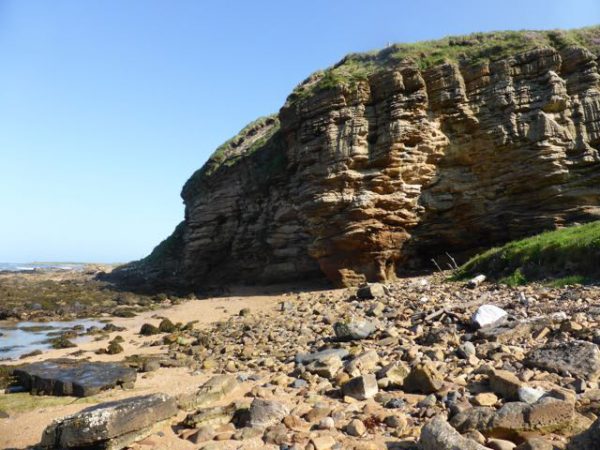 After the best part of four and a half miles we turn around to head back along the path.  On a couple of occasions we have to wait whilst golfers play shots in our direction.  When I play golf I hit a golf ball left to right; we are walking along the right hand side of a fairway so I keep a watchful eye for someone with the same shape to their shots as I have.

As we go around the course towards Constantine’s Cave we stop to look at the Old Lifeboat House.  The Crail Lifeboat was housed here from 1884 to 1923. 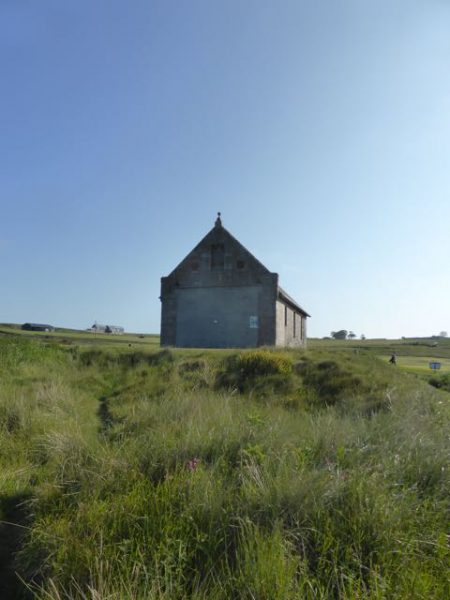 After passing the Cave we turn right to follow a footpath up towards the golf club car park.  This is a major golfing complex with a couple of courses.  Most of the accents we have heard out on the course were American and there are several coaches in the car park, presumably these courses form part of a golfing tour in this area.

The two golf courses here are Balcomie and Craighead.  Apparently the Crail Golf Society managing both of these courses was established in 1786 and is the seventh oldest golf club in the world.  The Balcomie course was laid out in 1894 by Tom Morris.  Morris laid out many golf courses including the Royal North Devon course on Northam Burrows at Westward Ho! where we stayed in April.

Our route is now straightforward.  We leave the golf club along the entrance drive taking us past the disused Crail Airfield, first used in World War I as a training facility for the Royal Flying Corps.  During World War II the airfield was used to provide cover for ships heading towards or leaving the Leith and Methil docks.  After the war flying here was limited with the base at Leuchers being preferred.  The runways and buildings have been given Scheduled Status by Historic Scotland.  The site is used now as a raceway for motor sports, as we walk along we hear the sound of car engines on the track. 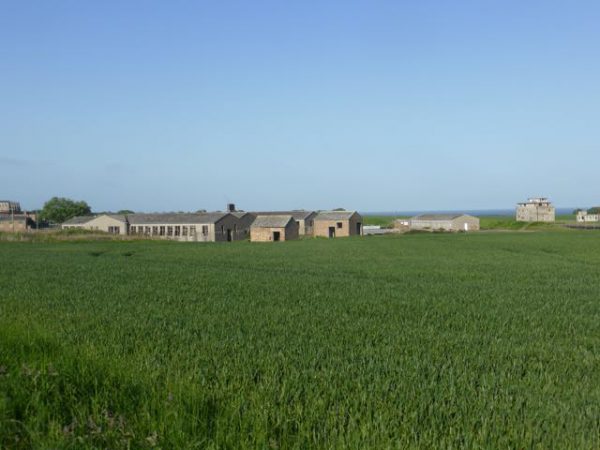 We are soon back in the outskirts of Crail, it has been a cracking walk of almost eight miles. 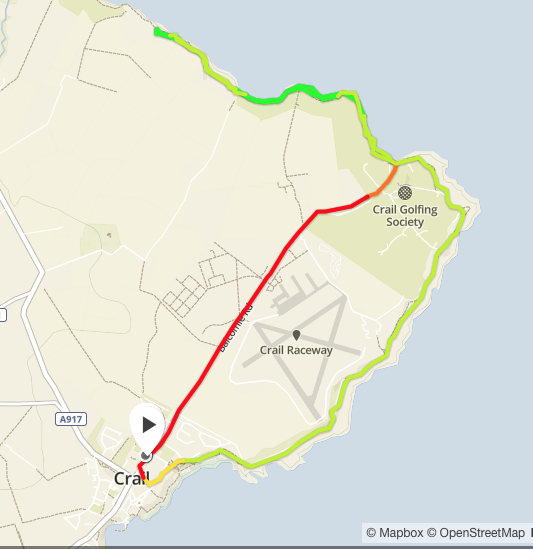