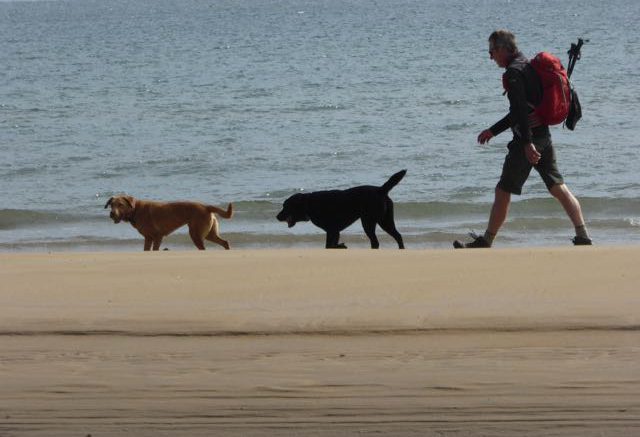 After yesterday’s walk through Tentsmuir Forest we feel like seeing the sea as we walk. I am not normally keen on coastal walks because of the potential for cliffs. But the coast in this area is not too high so I am not concerned when Lynnie suggests a walk from Shell Bay to Lower Largo.

We park to the east of Shell Bay in a public car park near the entrance to the caravan park at Kincraig Dean. Our walk starts by walking through the caravan park before heading down to Shell Bay, but the tide is in on this small bay and there are families dotted about so we decide to continue inland. 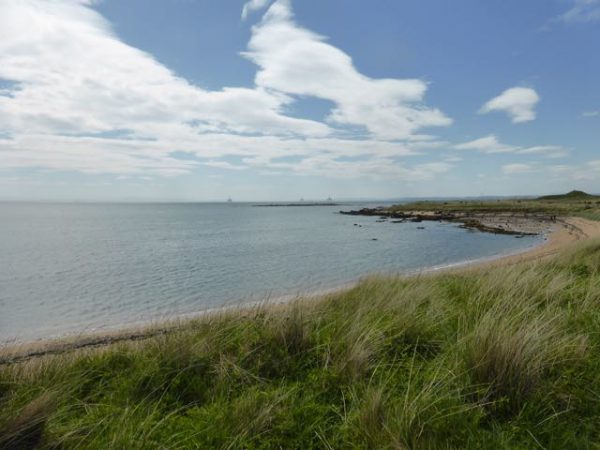 The coastal path cuts the corner of Ruddons Point, from here the three oil rigs in the Forth Estuary dominate the skyline to the south. 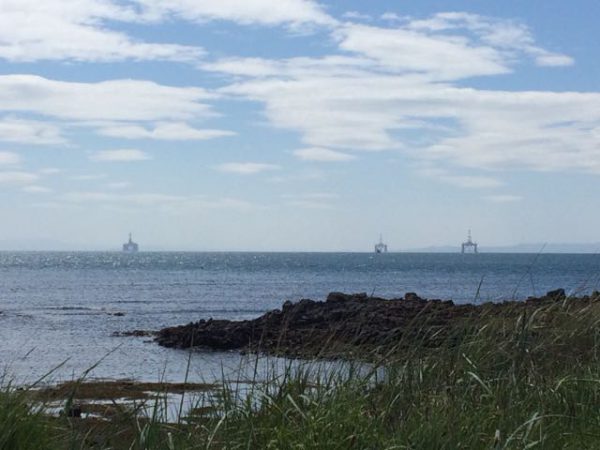 Following the path around the point we soon pick up the coastal path again and follow this across Cocklemill Burn onto Largo Bay. As we enter Largo Bay the tide is beginning to recede and the dogs are keen to get onto the sand for a run about. It would be a pity to spoil their day and they are soon excitedly chasing tennis balls. 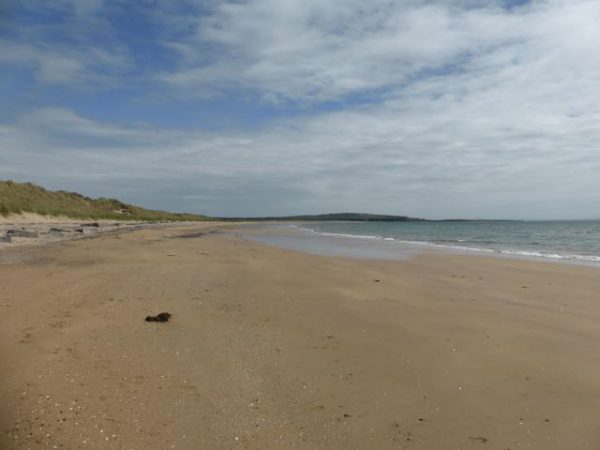 This is another beach that we have all to ourselves. It is also covered in treasure for Lynnie. Over the years Lynnie has acquired an amazing collection of treasure from beaches. It might be an unusual stone or a perfect shell, but we rarely leave a beach without something being purloined for her collection.

This is another cracking expanse of sand, broken up by the occasional rocky stretch. In the far distance we can see the Lomond Hills. 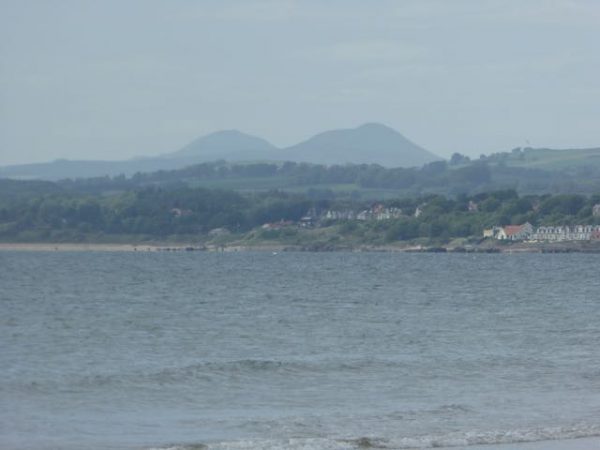 Near Viewforth we leave the beach to follow the coastal path into Lower Largo.

Entering Lower Largo we spot a statue on the wall, the plaque reads “In memory of Alexander Selkirk, Mariner, the original of Robinson Crusoe who lived on the island of Juan Fernandez in complete solitude for four years and four months. He died 1723, Lieutenant of HMS Weymouth aged 47 years. This statue is erected by David Gillies, net manufacturer, on the site of the cottage in which Selkirk was born”. 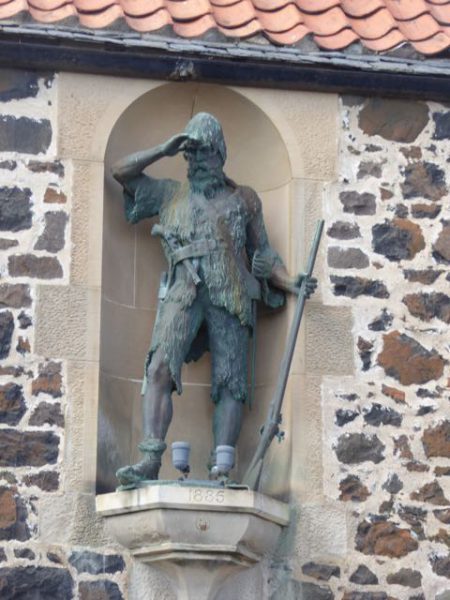 Further on down the lane we pass an interesting totem pole. This has been created by artist Alan Faulds, and it sits in his garden overlooking the Firth of Forth. Apparently it is called Malagan, it is striking. 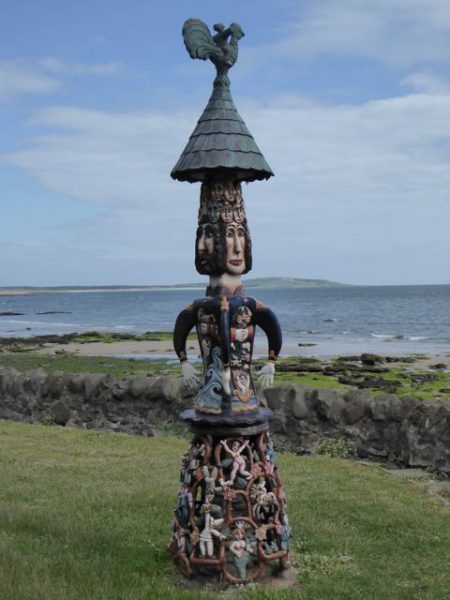 We wander down to Lower Largo harbour, an old port occupied by a couple of fishing boats. 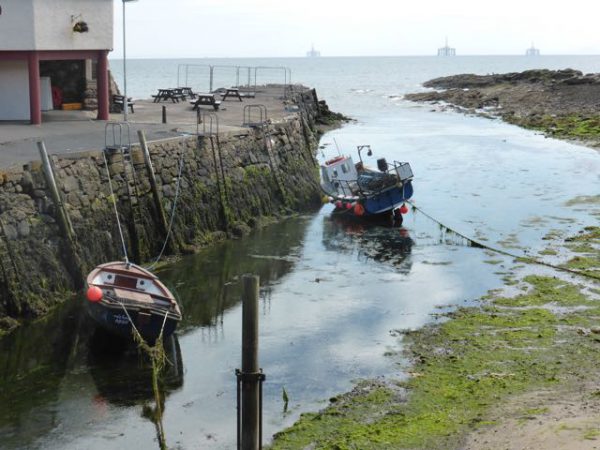 Whilst I sit and look at the view Lynnie wanders off to the local shop for an ice cream, it has been a while since her last one, as she returns I can see that this latest acquisition meets with her approval. 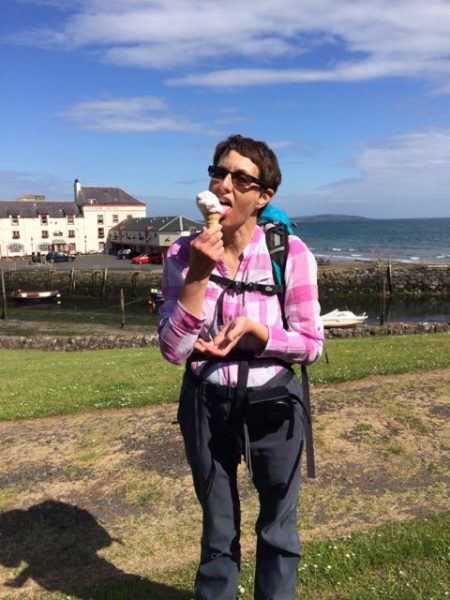 Behind the harbour is the old railway viaduct. The line here was closed in the 1960’s, another victim of Beeching’s cuts. In its heyday the line transported folk here to enjoy the wonderful beach. 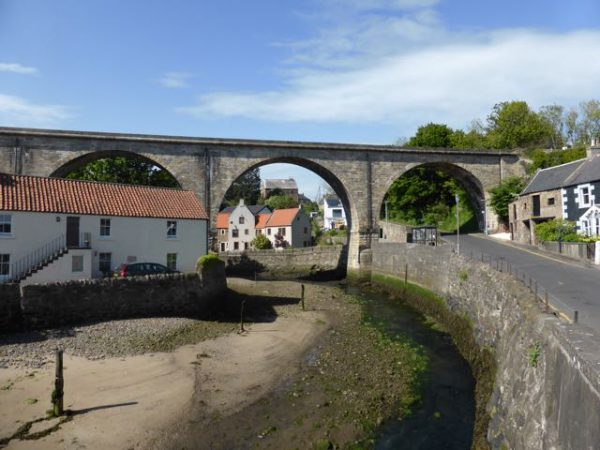 Our return route is a case of retracing our steps along the coastal path and beach back to the car park. As we leave Lower Largo we pass a gateway with an inscription of the Cardy Works and the footpath passes below Cardy House.

Apparently Cardy House was built by Jack Gillies a 19th century entrepreneur who was born in the village. After making a fortune abroad he returned to Lower Largo and set up a Net Making Factory to provide employment for the people of Largo.

Jack Gillies was a direct descendant of Alexander Selkirk and in the mid 1850’s the single storey thatched fishermans cottages (where Selkirk was born) were replaced by the present terrace row of houses built for the Net Factory employees.  It was his son David who placed the Robinson Crusoe statue here to commemorate Selkirk. 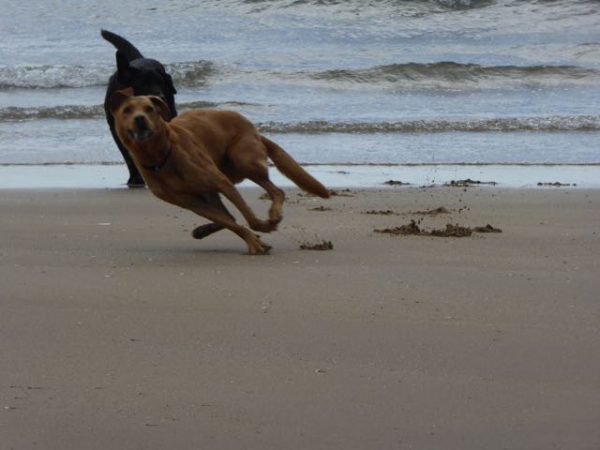 Out of Lower Largo we follow the line of the disused railway line, after Dumbarnie Links we return to the beach so that the dogs can play. Our little wander has covered just over eight miles, although the boys must have covered twice that distance running around on the beach. They will certainly sleep well tonight! 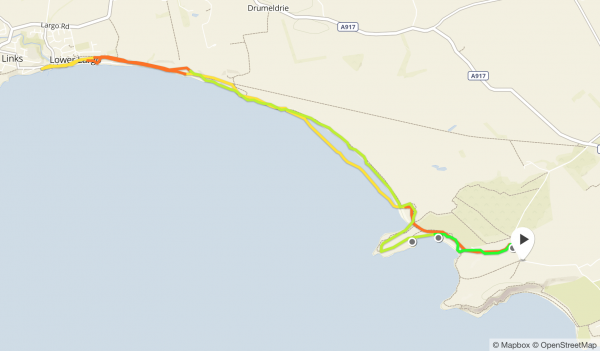