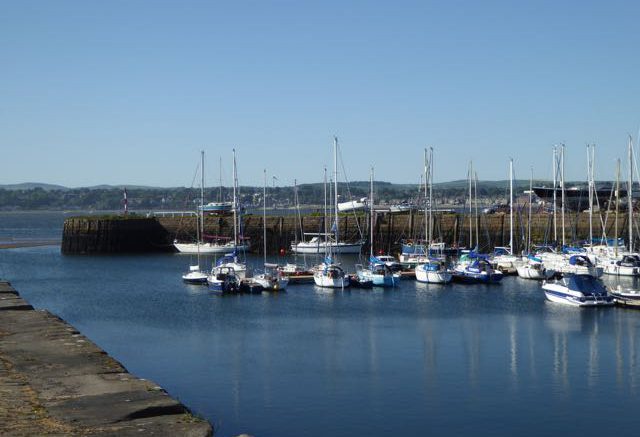 From our site, Knockhill CL, we have a fine view of the Eden Estuary, beyond this is Leuchars Airfield and beyond that Tentsmuir Forest. After our hill walking yesterday we decide that today we need something that is relatively flat and a walk in Tentsmuir Forest seems to fit the bill.

It is an interesting drive through the edge of the Leuchars Airfield to the starting point of our walk. This airfield had strategic significance during the Cold War, but as part of the 2011 Strategic Defence and Security Review it was closed as an RAF base and is now used by the Army. However, recent media reports suggest that because of the more recent perceived threat of Russian incursion by aircraft and submarine it may be re-opened. 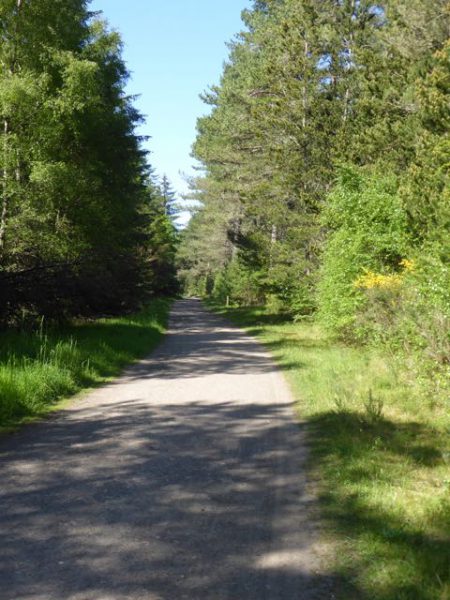 We start our walk at the car park adjacent to Tentsmuir Sands and head north on a woodland track that is also the Fife Coastal Way, we follow this track for just over two miles before we reach the Ice House. This was built in the 19th century to store locally caught salmon. Apparently the ice was dragged here from nearby Tayport. 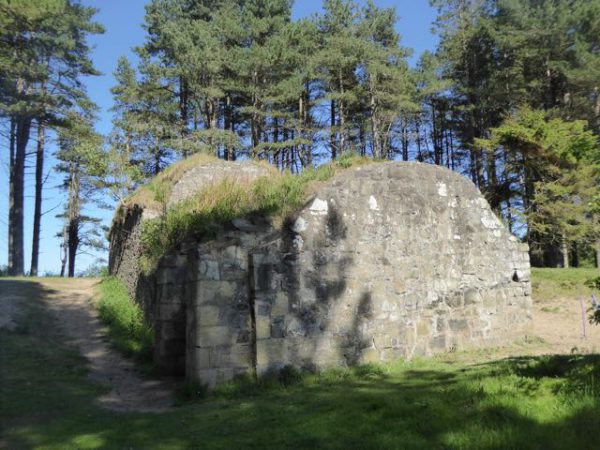 The next point of interest along this forest track is the March Stone. This bears the inscription, “This stone was set up in the year 1794. The march between Shanwell and Old Muirs salmon fishing is a straight line from the top of Normans Law to the low water. This march stone stands in the said straight line.” Apparently the march was the boundary and this marks the line of it for fishing rights. 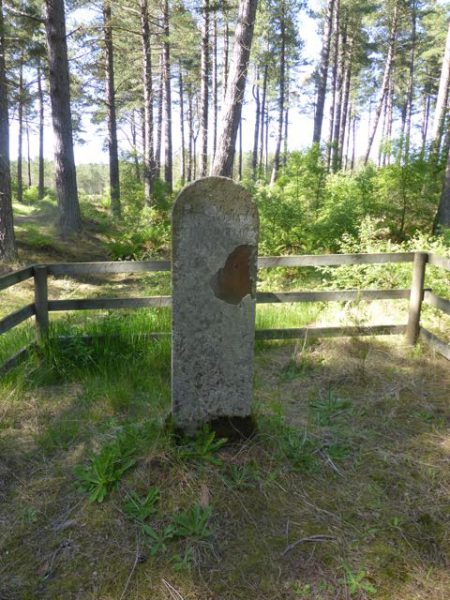 As the path sweeps to the left towards Tayport we comment on how peaceful and quiet it is. The car park was busy, but we have only seen a couple of other walkers and the odd person on a bike. It is an interesting bit of woodland and enjoyable in the warm sunshine. 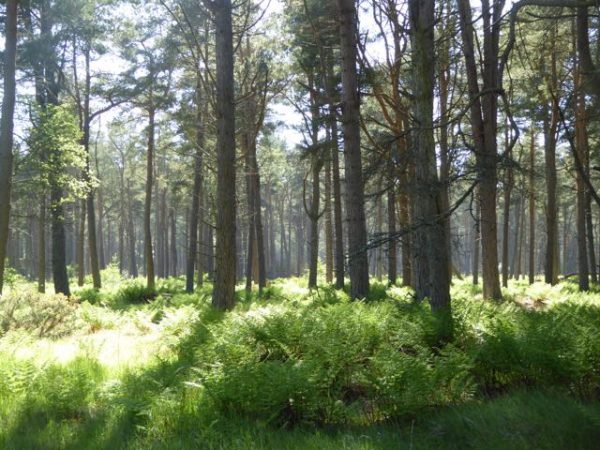 Then in a clearing besides the path we spot some chap messing about with a tablet and see something on the ground close to him. It is one of those dreaded drones. I accept that they have valid uses and in the right hands can be beneficial i.e. stopping poaching of wildlife in Africa, assisting in mountain rescue. But I can see no reason, other than vicarious, why a person would want to fly these for pleasure. I think they should be licensed, with individuals providing clear evidence as to why they need them and before they can fly them proving their proficiency.

The loud buzz of the drone is intrusive in this peaceful forest and about half a mile later we spot it flying around above us. I give it a friendly wave (two fingered) and it soon disappears.

Emerging from the woodland we come across a line of concrete blocks erected by Polish Forces as a defence line against German tanks landing here during World War II. Originally the blocks were installed at the high water mark. However, now they are well in land. Apparently the shoreline here is increasing by as much as 5 meters per year. 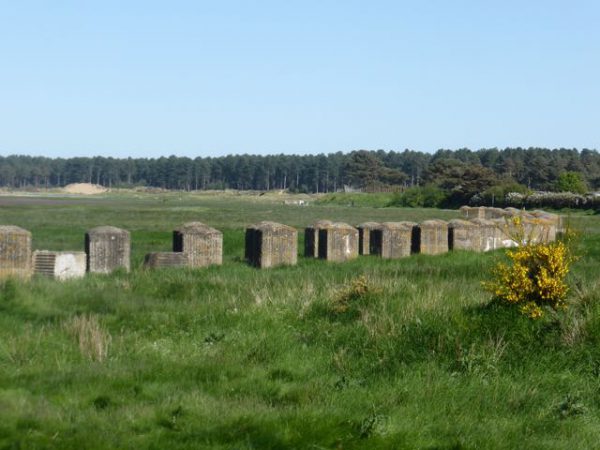 We follow the coastal path as it leads into Tayport, first across a park and then through a static caravan site before following a road around playing fields and finally through a residential area. Eventually we arrive at Tayport Harbour. 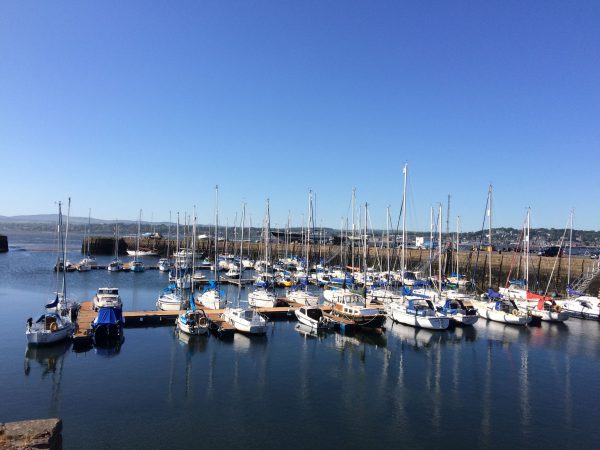 The harbour is now predominately used by pleasure boats, but in the past it was a key link to Dundee across the other side of the River Tay. In the 1850’s the Edinburgh, Perth and Dundee Railway Company established a rail service from Edinburgh to Aberdeen and used a ferry service to transport carriages across the Tay. Apparently at that time Tayport was known as Ferry-Port on Craig. This ceased in 1878 when the Tay Rail Bridge opened, but following it’s tragic collapse the following year (with the loss of all passengers and staff, believed to be 74) the ferries came back into service until the bridge was rebuilt in 1887.

We have walked over five miles to this point so decide it is time to turn around and retrace our steps. Soon after re-entering Tentsmuir Forest we pass the drone flyer on his bike. He avoids eye contact so I assume that he saw my gesture to him. When we reach the Ice House we head towards the beach, the OS map shows huge expanses of sand. We pass an interesting sculpture of an iron bear. This is the sort I like it will not be bothering us. 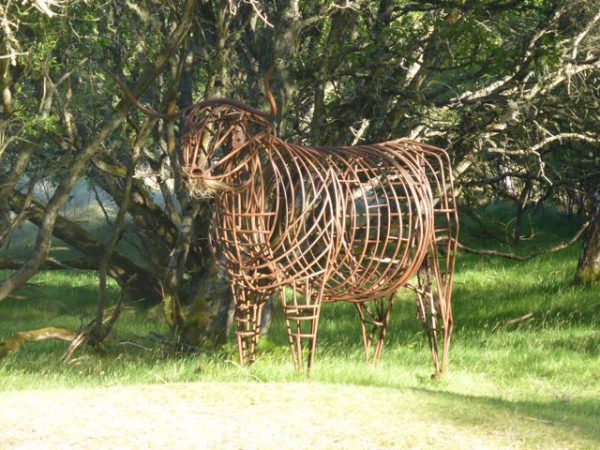 Soon after there is a set of wheels from an old railway carriage used to transport ammunition and then used for target practice (presumably without the ammunition). They were discovered in 2010 under an eroding sand dune. 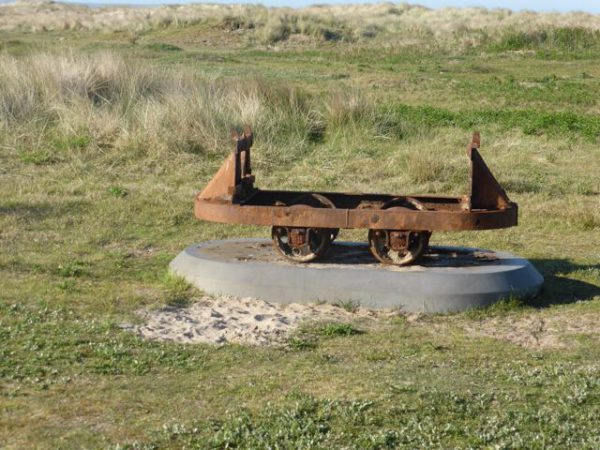 Walking along we come to warning signs about quick sand, this is clearly not a section of beach to be wandering around on throwing tennis balls for the dogs. We head back inland to follow a path just inside the tree line. This eventually brings us back to the car park with time to spare before the gates are locked for the evening.

Our walk has covered over eleven miles and has been interesting, but has lacked the stunning views we were treated to yesterday on the Lomond Hills. We are pleased we have made the trek but it is not a walk I need to repeat again in a hurry.