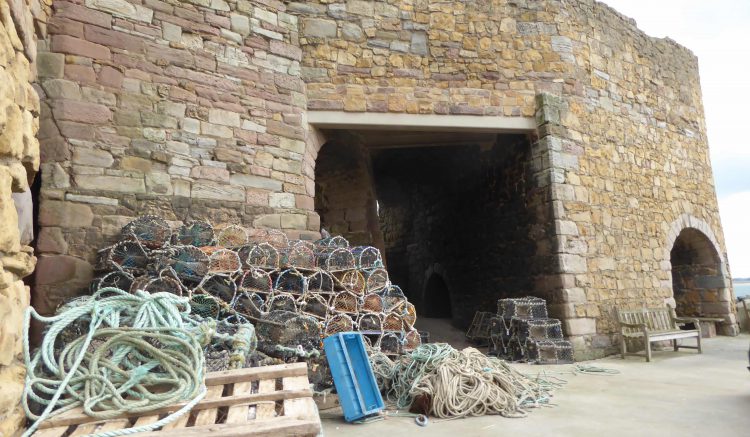 When we visited Northumberland in 2014 we had a number of enjoyable walks along the coast. The dogs particularly enjoyed chasing after a tennis ball on the expansive sands and Crosby was always keen to paddle at the waters edge.

Although it has never been our intention to walk the coastline of the UK we are gradually ticking off sections. There will be a huge chunk I will never attempt because of the cliffs, however, in this part of the world we have done long sections between St Abbs and Alnwick and today we are interested in exploring the section between Seahouses and Benthall.

Our starting point is the roadside by St Aidan’s Dunes. From here we walk along the coastal path into Seahouses and carry on as the route goes high above the harbour. Seahouses is the link to the Farne Islands, popular for the wild birds and the link to Grace Darling I have previously written about Grace’s heroic efforts. There are frequent and competing services to convey folk to and from the islands. 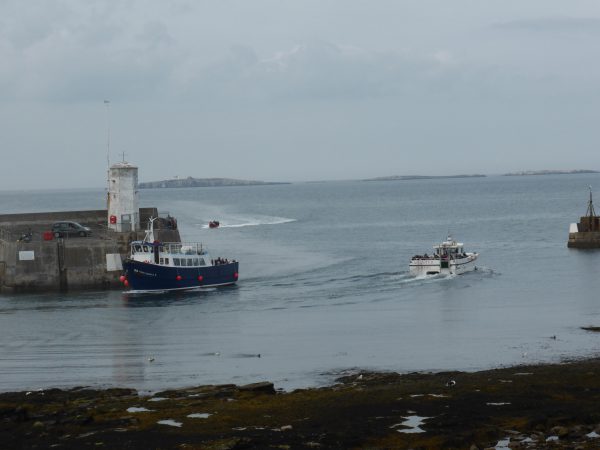 The tide is out so it is a good opportunity to wander out to the Powder House at the end of the breakwater. It was built in 1886 to store the gunpowder used in blasting for the construction of the long pier and new harbour. It’s isolated position on the rocks was chosen for safety reasons incase of accidental explosions. 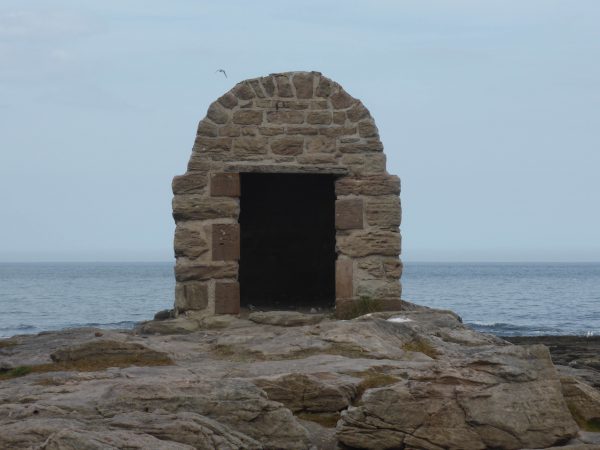 Back on the coastal path we walk along the top of the cliff and go through a kissing gate to walk across a corner of Seahouses Golf Course.

The path goes across North Sunderland Point and when we reach the far side we go down on to the rocks and cross them to join the beach. The dogs have a definite spring in their step anticipating some fun on the beach. 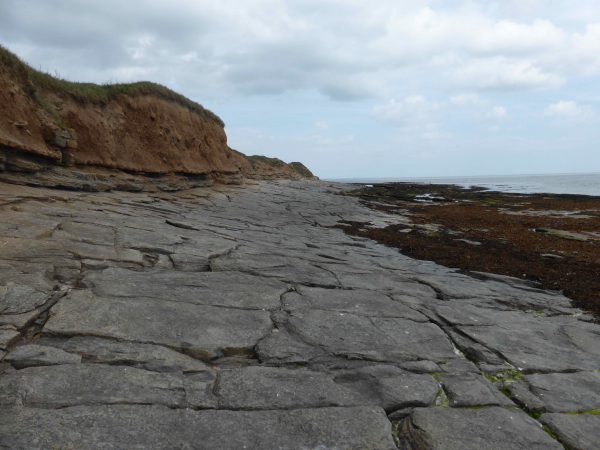 We are in no rush so are happy to spend time watching the boys running around enjoying themselves. Despite being over eight Dexter is just like a puppy every time he gets onto a beach and Crosby just loves being up to his knees in the water (a bit like me in that respect – I have not ventured far into the sea in the last twenty years but can be tempted to paddle.) 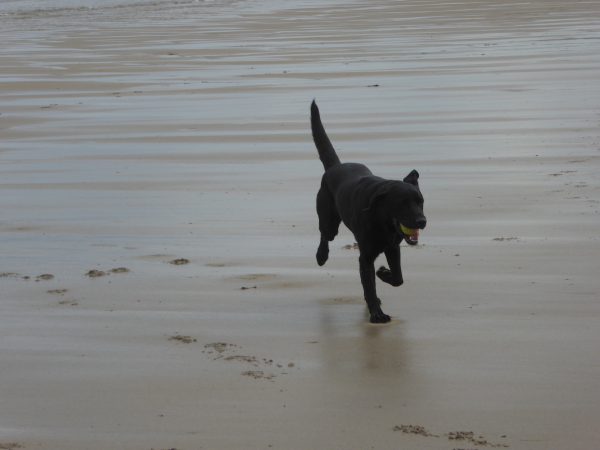 We make gradual progress along the beach, afternoons like this are too good to rush. 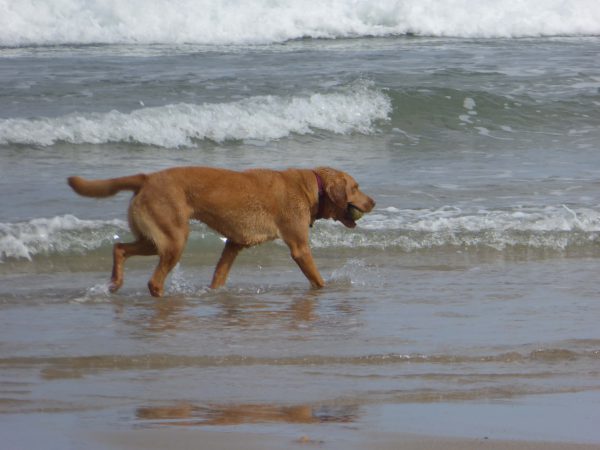 Approaching Beadnell we leave the sand to walk through the sand dunes towards the village. We follow the pavement through the village and continue on towards Benthall. My OS map says there are disused limekilns here and blog followers will know I am always keen to see a lime kiln. These would be in my top ten, probably second behind the Langcliffe Hoffman Kiln. The Beadnell Lime Kilns are absolutely stunning.

The information board states that in November 1798 it was agreed that Richard Pringle should build a limekiln on this site, (I do love the accuracy giving the month as well as the year of a decision taken over two hundred years ago!). The kiln was a sizeable affair standing at 24 feet high and having a pot with a diameter at the top of 16 feet and at the bottom 9 feet.

The coal and limestone came from the estate of a chap called John Wood, in return for being allowed to produce the lime here Wood had to complete the building of the harbour and keep it in good repair. He appears to have done a fine job. 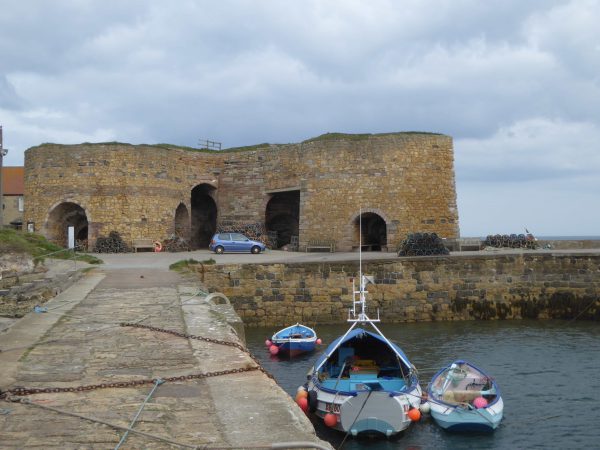 The kiln produced a thousand cartloads of lime each year and this was exported by sea to other parts of England and Scotland. It was clearly a profitable business because soon a second and then third kiln were developed.

Standing here today it is a picture of tranquility, but just imagine the heat and toil when all three kilns were in full operation.

We had originally intended to walk along the coast to Low Newton-by-the-Sea, but that is at least another two miles, so we decide to save that stretch for another day. The route back is just a case of retracing our steps to Seahouses. Of course on the way the boys want to play on the beach again. They will be worn out by the end of the day. 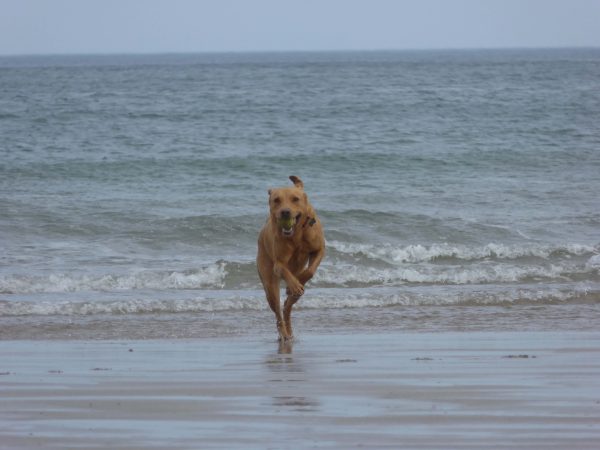 Back in Seahouses we can smell fish and chips frying. The last time we came here I was standing in the queue for the fish and chip shop that claimed to be the favourite of the Hairy Bikers. The queue extended outside the door of the shop when a member of staff closed and locked the door without a word of explanation. It was a bizarre event, with one couple finding themselves either side of the door. I don’t care how good their fish and chips are I will not venture in there again. So we visit their competitors, the Neptune Fish Restaurant across the road. 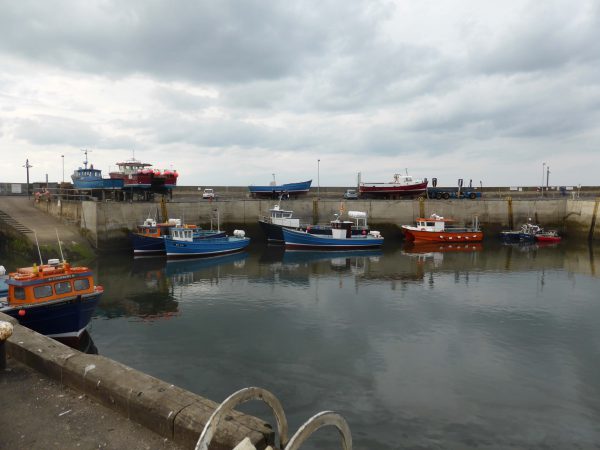 We eat our supper on a bench overlooking the harbour. I fully recommend this takeaway, the service was friendly and the generous portion of fish is excellent with a light, crispy batter. After our supper we wander around the harbour and look at the lime kilns here. Usually these would have been a highlight of the walk, but they have been well and truly trumped by their rivals at Benthall. 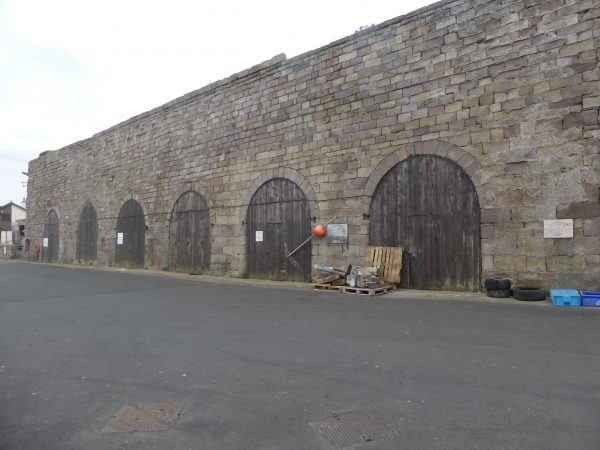 My Suunto Traverse says that we have wandered for almost eight miles. I find this amazing because we have just been sauntering around for the afternoon. I can still do little more than stroll at the moment because my knee is still giving serious gyp. Hopefully it will settle down soon, there are hills I want to walk this week! 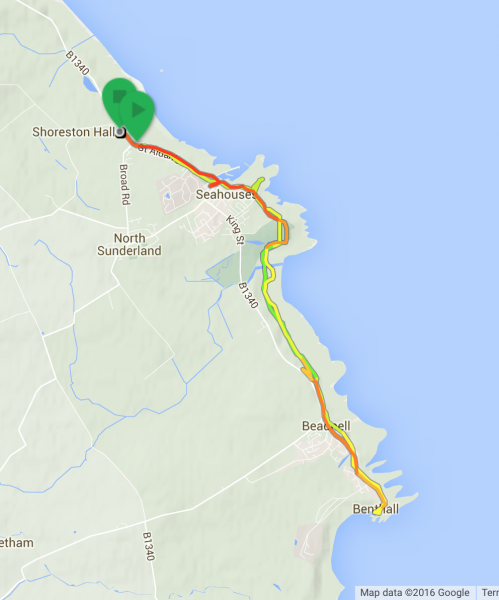