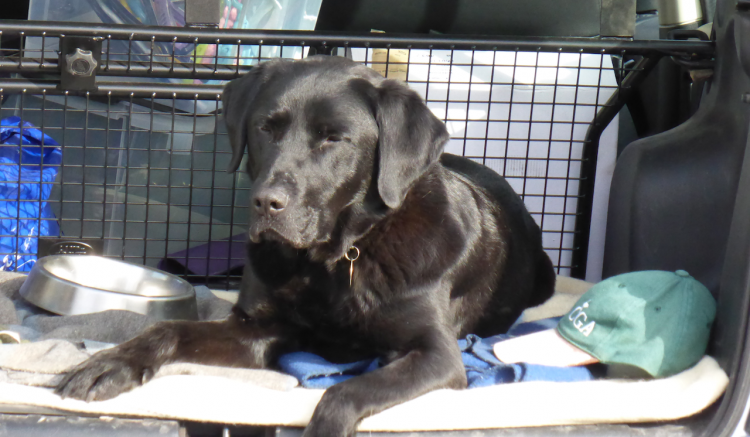 A couple of days left before we kick off on our travels and the sun comes out to help us with our final preparations. Whilst we do another sift of the items that have found their way into the Unicorn, half of which we are sure not to need but still feel essential at this juncture, Dexter takes a relaxed approach and enjoys the spring sun from one of his favourite vantage points.

Meanwhile Crosby continues to vigilantly stand guard, there is no apparent threat, but in Crosby’s world you can never be sure who might want to venture into his designated zone and there is always the distinct possibility that they will have a biscuit in their pocket. Indeed, soon after the picture was taken Crosby’s friend Amber came visiting with her Mum and the anticipated biscuit arrived!

For most of the morning three hens have been wandering around spending time looking for crumbs under the car, but they are not worthy of Crosby’s attention. I have yet to fathom how the dogs can find the sight or smell of a pheasant or partridge totally irresistible, but a domestic hen fits into the “can be ignored” category. 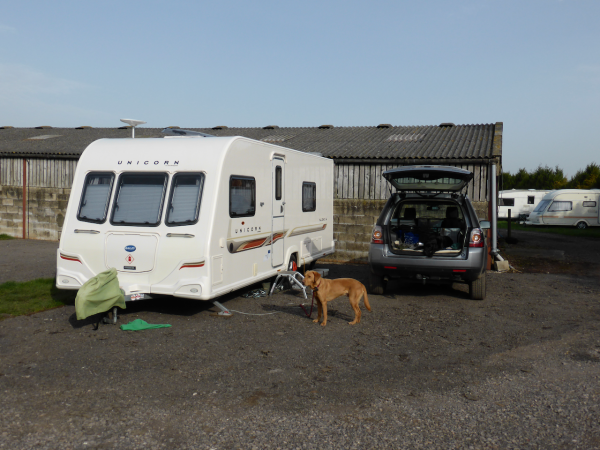 Our week at Whitehill Farm has been hectic with the final preparations for the trip and packing the remaining contents of our house into store. However, it has been a joy to step out of the van in the morning and take the boys for a run in familiar territory. These are the paths that they walk most days, and paths that I have walked all my life.

Growing up in the village as a nipper I worked on this farm at weekends whilst still at school. At that time in was predominantly a pig farm and my tasks were wide ranging. Feeding pigs, mucking out stys and barns. My dear mother used to say that it was the pig muck in my boots that made me grow. Out in the fields I rode the back of the potato planter, then later in the season took part in the back breaking task of spud picking. I also ploughed, harrowed and worked on the harvest in school summer holidays. Happy days!

One of the tractor driving skills I acquired in my teens was the ability to reverse a grain trailer, or bale trailer, into a barn. At fifteen I was proficient. Hopefully forty years later, if and when I am required to stick the Freelander in reverse with the Unicorn behind it will all come flooding back!