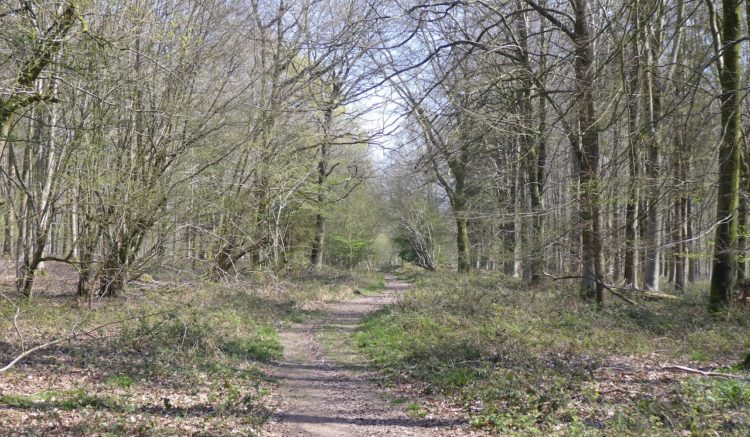 Crosby is making good progress on his rehabilitation, yesterday we notched up four miles together without any ill effects.  So today we are going to venture a bit further and do one of my regular walks from Pitton to Bentley Wood, although it is the first time I have blogged the route.

I start my walk from the Silver Plough in Pitton by turning left out of the car park and left again along The Green, the lane running alongside the Silver Plough pub.  I take the second footpath on the right to head uphill and leave Pitton.  After going through a kissing gate at the top of the hill I continue past paddocks and through two more gates to follow the footpath into Church Copse.

On reaching a well-used path on the right I turn into the woods to walk along the side of Three Sisters Copse.  The bluebells are just coming into bloom, in a few days time this area will be a sea of blue.

On reaching a forestry track I turn right and follow this gravel track heading south through Bentley Wood.  Many of the older trees in the woods were felled in the two world wars. During World War II the American Army used some of the clearings in the woods for training and the tracks that were built in the 1940’s are still present.

I ignore a track on the right and continue on to pass Hooping Oak Copse.  At a five-way junction of tracks I take the route heading south and stay with this track until it reaches a crossing of gravel tracks.

My route is to the left, but first I continue on for a few yards and stop at the memorial stone and bench to Ralph Whitlock to give Crosby a drink.

Ralph was born in Pitton and wrote extensively about country life including a couple of books about the village of his birth.  I have recently been re-reading his book “The Victorian Village” it is a well crafted observation of village life back then.

Crosby refreshed we are ready to continue, we head back the few yards to the junction of paths and now turn to join the path heading in a south easterly direction.

At a crossing of paths I turn right to head through Coal Pit Copse.  It is a lot quieter than usual, I usually see a handful of people walking in these woods, but today I have only seen one cyclist.

I am so fortunate to have this cracking bit of woodland within walking distance of home.  The woods are maintained by a charitable trust which purchased the woods in 1983 using funds donated by the late Lady Colman, who lived in Winterslow. The site was designated a site of special scientific interest in 1985.

I stay on this path as it crosses another footpath and then after going through a gap in the trees return to the junction of six paths.

I now take the footpath opposite that initially heads towards the west besides the edge of the field and the mature trees of Church Copse. After 450 metres the way-marked path enters the woodland and then emerges into a clearing besides a new plantation.

I keep on the path to go through a disused pit and then into an arable field. The path reaches a stile; I enter another arable field and cross diagonally. After crossing the field I reach another stile and continue along a path with a hedge to the left and in the next field continue with the hedge on the right.

The path becomes hedge lined towards the riding stables.  I turn right and go along the track for 200 metres to reach a crossing of paths turning left to go through the gate.

Now I take the path back to the village and my starting point at the Silver Plough.