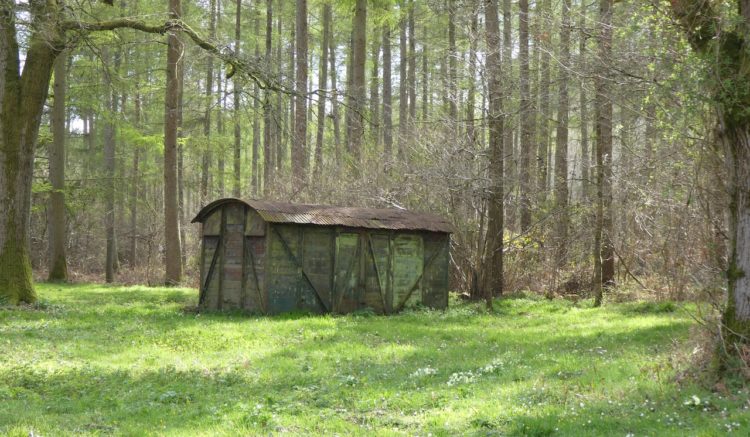 I am out walking a familiar route again today.  One of the consequences of the lockdown and not being able to get away in the caravan is frequently walking the same routes.  However, I am fortunate to have such a network of paths on my doorstep enabling me to get a reasonable variation.

Starting from the Silver Plough I turn left and then immediately left along The Green.  I ignore the footpaths to the right and left and stay on the lane until reaching a bridleway opposite Glebe House.

At the end of the bridleway I turn right to walk up the track, Winterslow Hollow.  I ignore a footpath on the left and then within 10 yards turn left to join the permissive path running along the edge of the fence line.

I stay with the path as it heads towards farm buildings.

After passing the farm house and barn I turn right to follow a track until it passes a drove on the right and then as the track bends towards Winterslow Coachworks garage I continue straight on along a footpath towards a metal gate.

After passing besides the gate I turn right walking uphill.  These downs are quiet today the only sound being that of the skylarks and it is a very tranquil location.  However, during World War II they were the location of a permanent Starfish site.   This was the name given to dummy airfields set up to confuse German bombers.

This site was built to deflect the Luftwaffe from Boscombe Down.  On the drove between Pitton and Winterslow is situated the control bunker.  From there they  set off fires so that during an air raid enemy planes would think a bomb had landed on the site in the hope that others would aim for the same target.

Whilst walking through Winterslow a year ago I bumped into a chap who was about ninety, he lived in the village until joining up for National Service and as a child used to visit the bunker to chat to the servicemen located there.

It was not until recently that I discovered there was a similar decoy airfield nearby on the Clarendon Estate on the downs close to Fussells Lodge Farm.  That site was used as a decoy for Old Sarum airfield.

After passing a pit on the left, which I have always understood to be one of the many bomb craters in this area, I start to head downhill on a grassy track and then take a footpath on the left heading across a field towards the edge of Houndwood.

After going through a gap in the hedge the path continues with woodland to the left and an arable field to the right.

As the tree line bends to the left I take a footpath on the right that heads diagonally down across the field to go through the hedge line and then turns left to follow the edge of a field.

This path enters Church copse by a metal gate and continues south on the broad track through the woodland.

After passing a clearing with an old railway carriage I stay with the track for just over 200 yards to reach a footpath on the right with a way marker towards Pitton.

From here I head up through Church Copse then keep on the footpath as it runs besides fields.

After passing through a kissing gate I cross a track and go through another gate to walk besides paddocks to reach another kissing gate with fine views.

Then it is down the steps to reach a tarmac lane, where I turn left and head back along the lane to my starting point.  It has been a pleasant afternoon for this four mile route and I have only seen two other people all the way around.