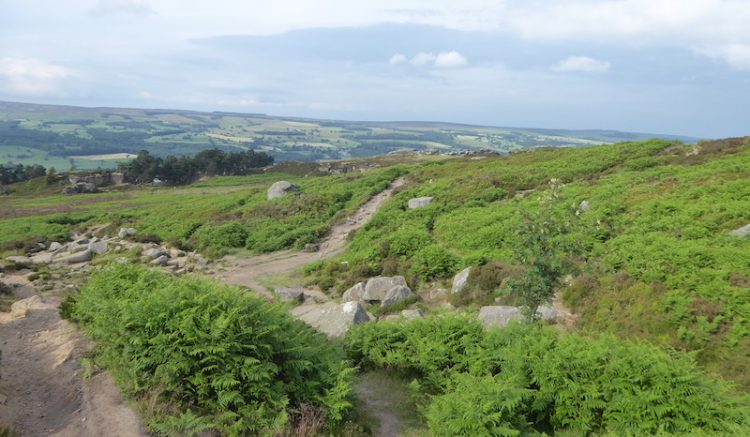 A trip to Ilkley would not be complete without a walk on Ilkley Moor, as we all know the moor became famous as the inspiration for the folk song “On Ilkla Moor Baht ‘at” and it is almost impossible to think of the moor without the lyrics of the song coming into your head.

I start my walk from Hall Croft CL and on leaving the site turn left and follow the pavement besides the A65 towards Ilkley.  As I enter the town I turn right just after a set of traffic lights head up Victoria Avenue.  Continuing steadily uphill I stay on this road when it becomes Hollingwood Rise.  As it sweeps to the right by the junction with Parish Ghyll Lane I take a footpath directly in front of me that continues uphill.

The path emerges onto Queens Drive, here I cross the lane and continue on the footpath as it keeps going uphill on steps through the edge of Panorama Wood. 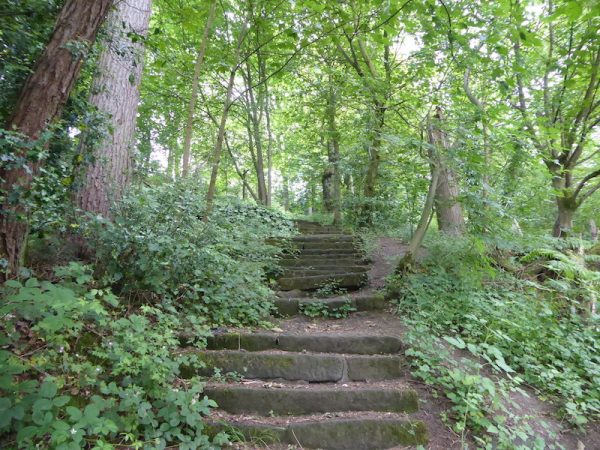 Emerging from the woods I join a lane and turn right, after passing a couple of properties I take a footpath on the left to reach the edge of the moor where I turn left and follow the directions towards the Swastika Stone and Addingham Moorside.  The route is now a clearly defined path rising steadily across the moor.  Soon I am passing above Panorama Reservoir. 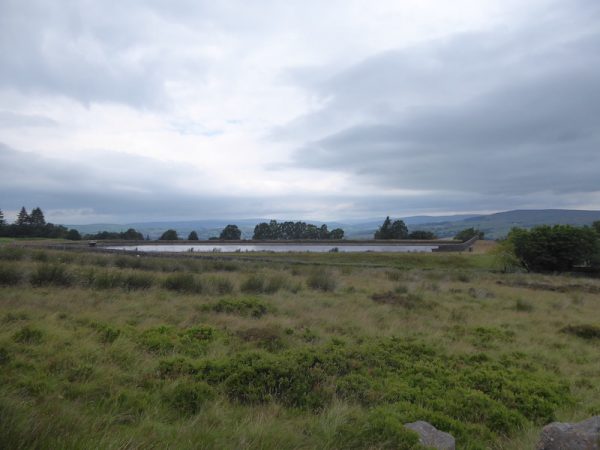 As the path continues to rise I reach the fenced Swastika Stone.  I didn’t stop here the other day because there were a few folk around and I prefer to view such interesting sites when they are quiet. 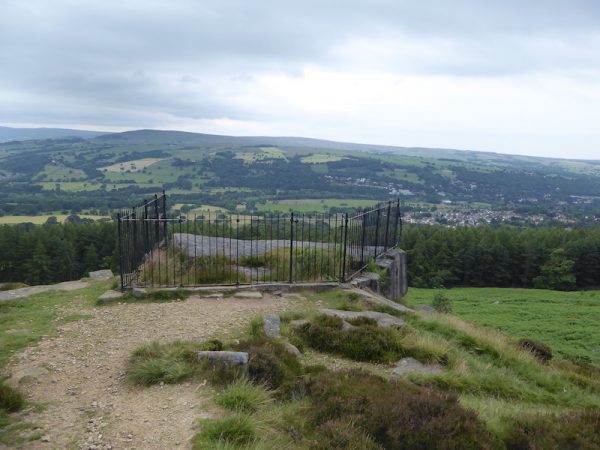 This ancient carving is thought to date from the Bronze or Neolithic age, although the one visible today is a Victorian replica placed close to the original which was severely eroded. 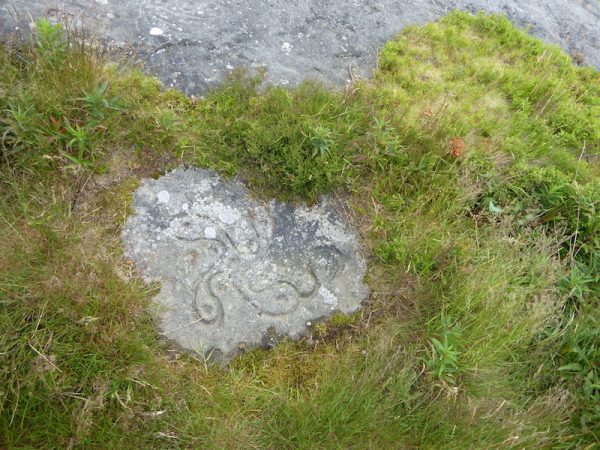 I continue along the path, which is part of the Dales High Way until I reach a drystone wall, I don’t cross through the wall, but instead take a clear path on the left heading steadily uphill with the wall on my right. 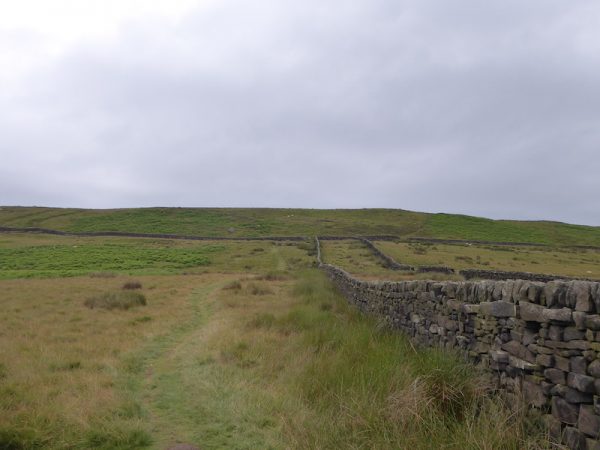 As I ascend I get cracking views across to Beamsley Beacon. 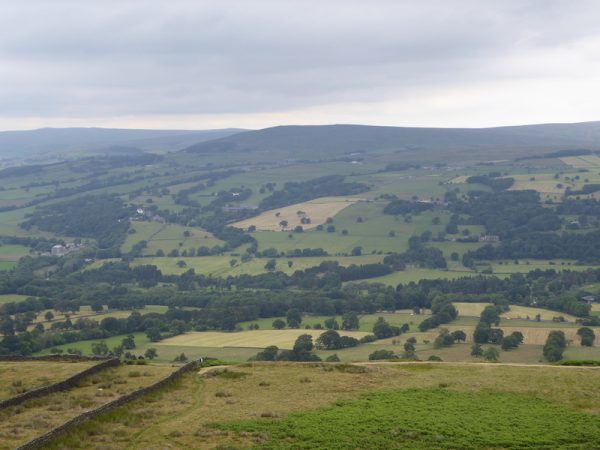 I continue uphill to reach a boundary stone carved “N ILB 1893” apparently this relates to the Ilkley Local Board acquiring the moor in 1893 and opening it for public access, prior to this it had been in the ownership of William Middleton who in 1842 had sought to enclose the moor. Thanks to the foresight of the Council all those years ago this remains as open access land. 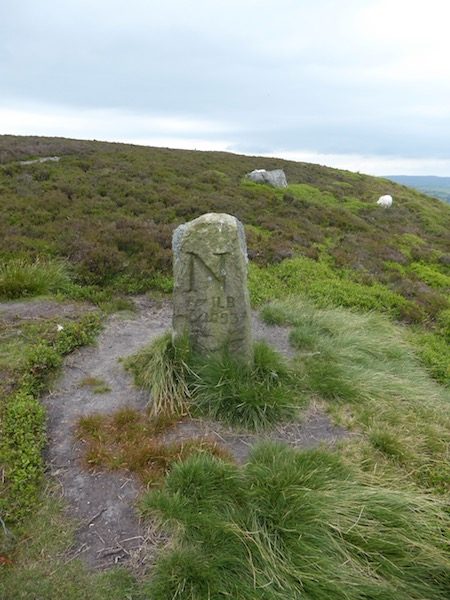 From here I take a southerly direction across the moor, this was not the route I originally planned but there is a clear way through the heather so I follow it, it is only as I start to get into boggy land on Crawshaw Moss that I start to doubt my judgement.  The path becomes less clear and the ground decidedly soft. 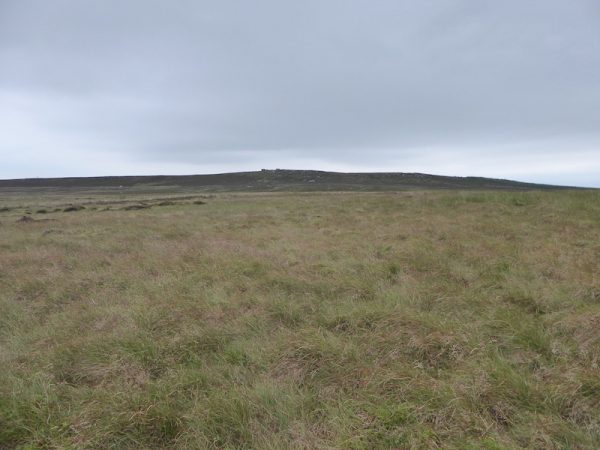 I can see the rocks of East Buck Stones directly in front of me and it is with some relief that I reach firmer ground.  The next time I am here I will avoid this section of the moor and keep to the firmer ground, I am glad it has been a dry spell because it would have been a bit scary if it was wet.  On reaching East Buck Stones I turn left and follow the clear stony track towards Cowper’s Cross. 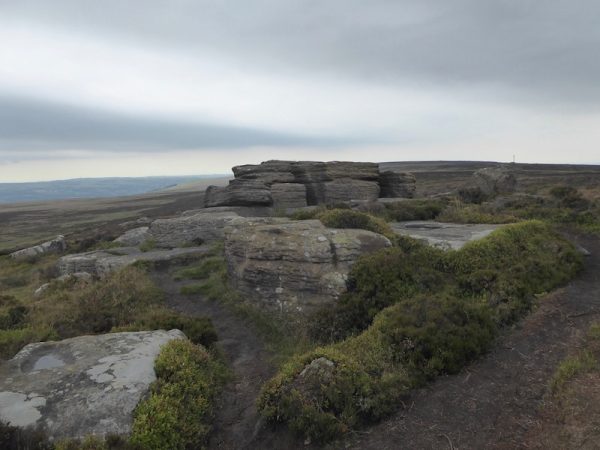 Cowper’s Cross is thought to date from the 12th century, although it is likely that the current cross is a replacement erected in the 18th century.   Over the years further renovation was required when the cross was struck by lightening and then in 2007 vandalised. The purpose of the cross is unknown, it may have been a marker post on the drove across the moor that followed the route of the Roman Road, or used as a meeting place. 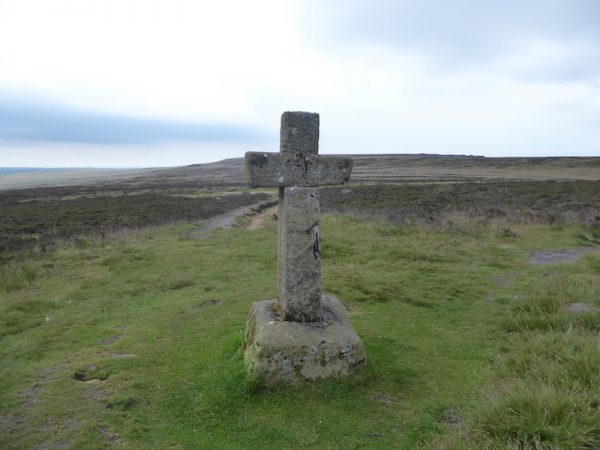 After passing the cross I turn right on the broad stony track and head towards Whetstone Gate.  Just before reaching the gate I turn left on a path that heads up besides the Whetstone wireless station. 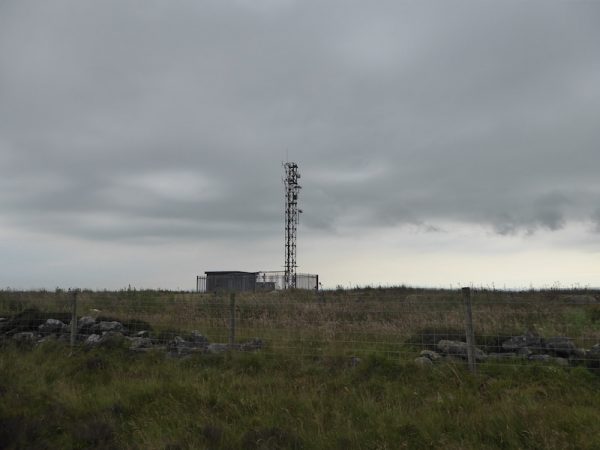 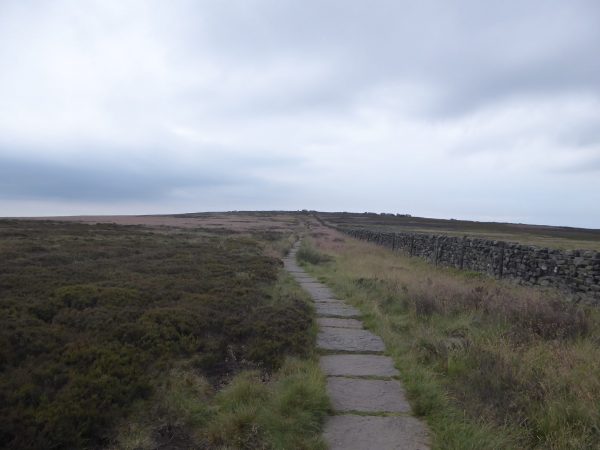 Initially I wonder of the need for the flagstones, but as I get onto the moor I pass some very boggy areas and it is clear that it would be easy to get into difficulty up here in bad weather. 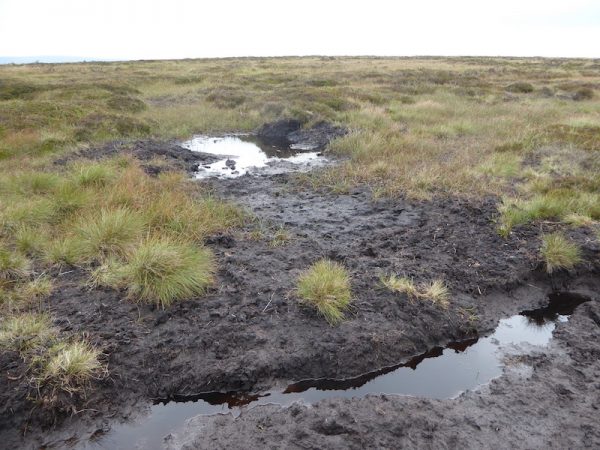 The path soon reaches an Ordnance Survey trig point. This is the 146th I have “bagged”. 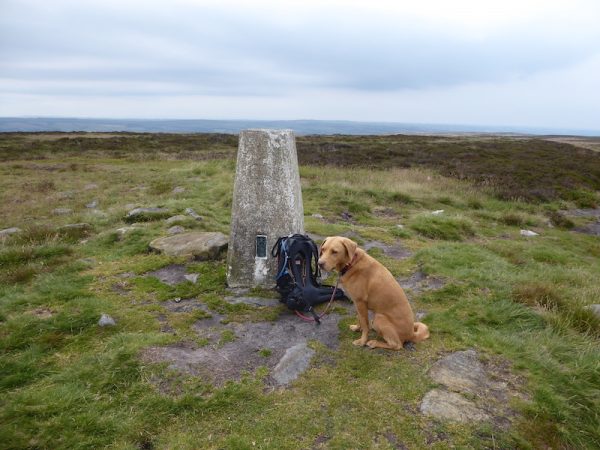 The route continues across the moor along the flagstone path.  As well as being made famous by the “On Ilkla Moor Baht ‘at”, which was reportedly composed by members of a church choir whilst on an outing on the Moor, it is also the site of a well-reported alien abduction.

On 1 December 1987, Phillip Spencer, a retired policeman was walking across the moor prior to sunrise in foggy conditions.  He is said to have seen a creature approach him, which he photographed, this being signalled to him not to come any further, he then saw a dome topped craft on the hill that soon shot away at speed.  I am sceptical of stories about alien sightings but have no doubt that Spencer was convinced about what he saw. The bit that really troubles me in this tale is how the alien knew how to signal to stay away, presumably beings from other planets would have developed their own version of sign language which in all probability would be very different from the common signals we use. 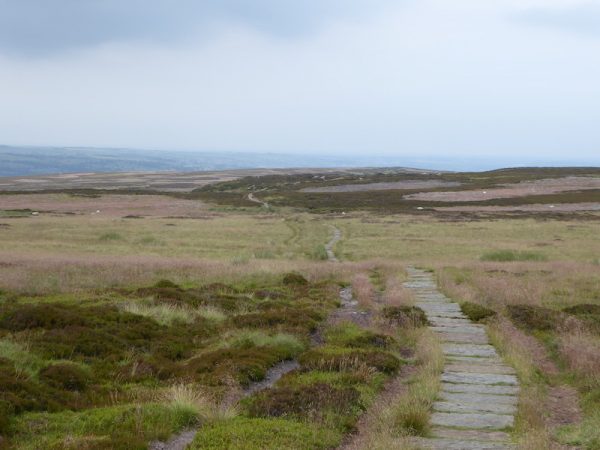 Continuing across the moor I do not see another person, in fact since leaving Ilkley I have not see anyone, not even an alien!  I reach the Lanshaw Lad boundary stone marked with the now familiar WM and ILB carvings. 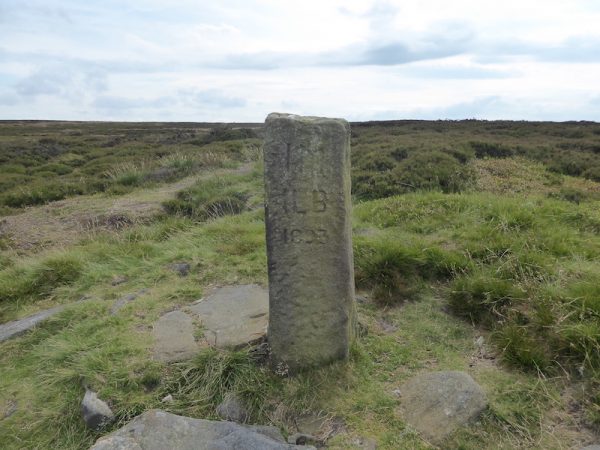 At the boundary stone I turn left and follow the Dales High Way for a short distance towards Gill Head. 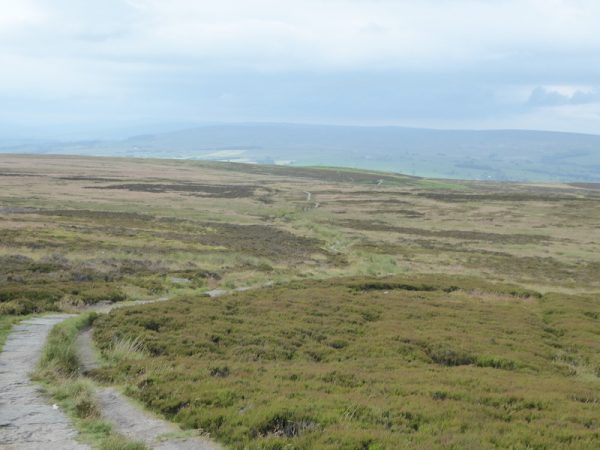 At Gill head I leave the Dales High Way and take a path on the right following the route of the beck.  Soon I reach a seating area with a marker indicating that Marsden in 45¼ miles away. 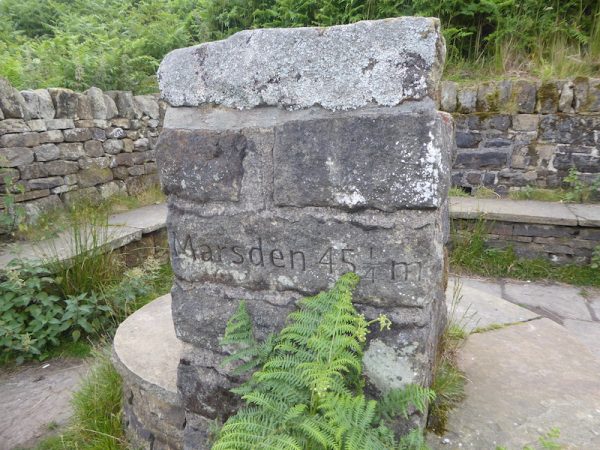 In the wall of the seating there is a poem box.  The origins of which I have failed to ascertain, however the principle is simple.  You put a poem in the box, turn the handle on the side and a poem fails out from the bottom. I turn the handle hoping for a literary masterpiece, but receive various comments on scraps of paper that are not worthy of sharing. Without pen or paper I cannot contribute a verse, instead I drop in a card with my blog details so might gain another follower. 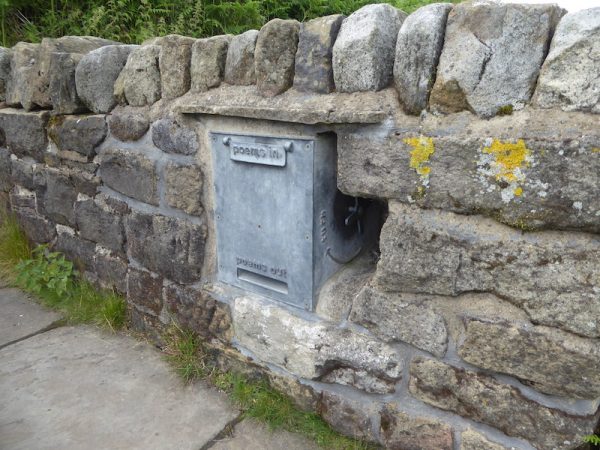 Continuing down the path I soon encounter other folk, this is the part of the moor I recall from my childhood.  We used to spend hours playing around the rocks but never ventured onto the desolate areas of the moor. 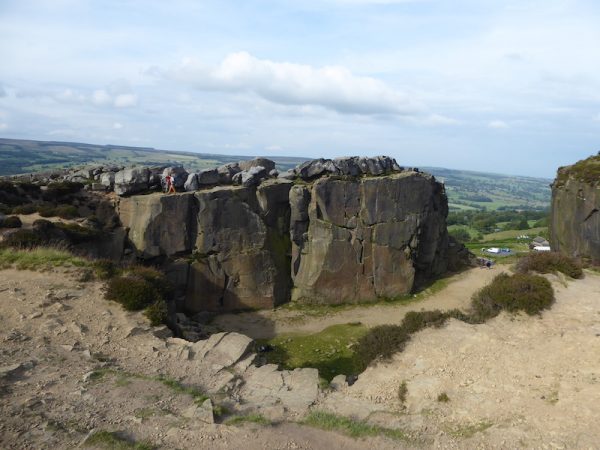 Being a sunny afternoon there are loads of people about, as I prefer places when they are quiet, I avoid the touristy cow and calf rocks instead taking a brief look at some of the engravings in the stones, It is easy to think that defacing places like this is a modern phenomenon, however some of the engravings date back to the 1800’s. 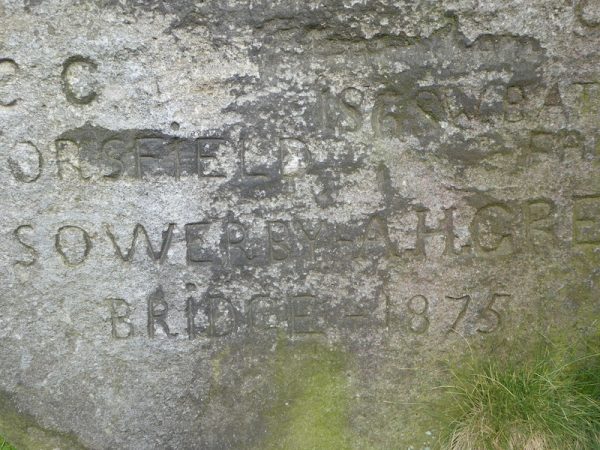 There are a network of paths here, it would be impossible to give directions for the one I followed, however it is a case of heading in a westerly direction whilst gradually descending towards Ilkley. 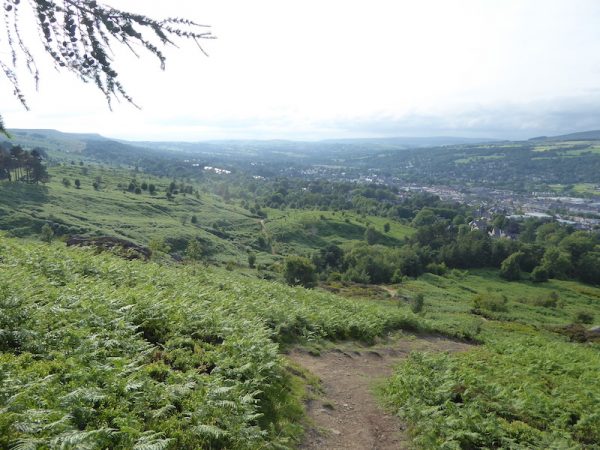 I leave the moor by a gate that leads to Wells Road, on my right is Wells Terrace and the blue plaque on the wall indicates this is the place Charles Darwin stayed in 1859 whilst he was awaiting the publication of ‘On the Origin of Species.  It later became a maternity home. 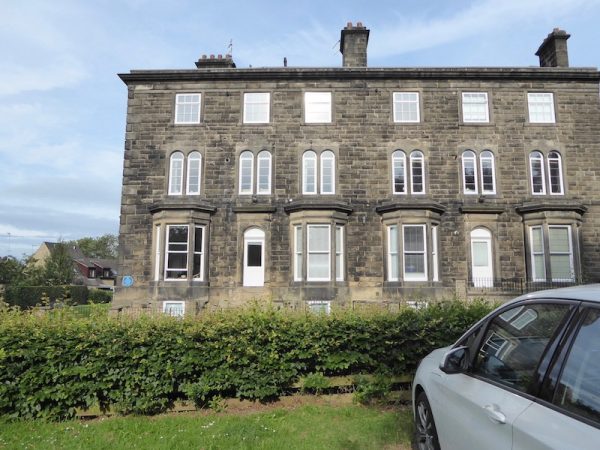 Walking down into Ilkley I head for the River Wharfe and the packhorse bridge built in 1675.  Here I turn left at the starting point of the Dales Way. 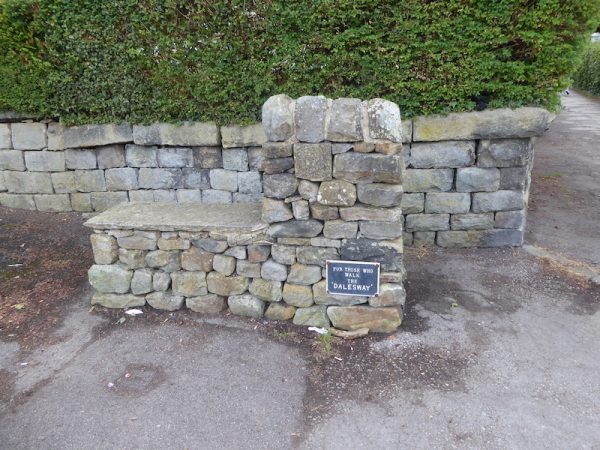 I stay on the Dales Way as it passes Ilkley Lawn Tennis and Squash Club before heading through a series of kissing gates to cross pasture fields where I meet up with Lynnie who is out for a stroll with Dexter.  The path then gets close to the river again and after crossing a footbridge over a stream leading to the River Wharfe we take a footpath on the left this is the path I started my walk on and we soon reach the driveway of Hall Croft CL.

My nine-mile walk has confirmed my intention to visit this area again before too long.  Now it is time to start our preparations for moving on to Settle tomorrow.