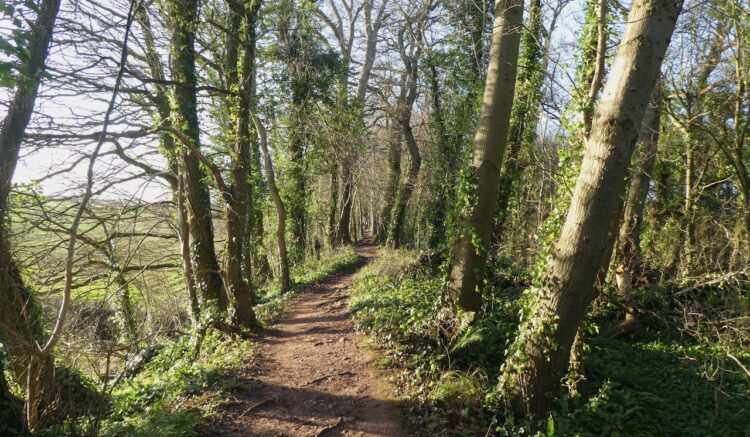 Whilst at the Cadeside CAMC site last January we did an interesting walk along a disused section of the Grand Western Canal and we’ve decided to combine part of that route into today’s walk.

Within a couple of hundred yards we reach Wharf Cottage, which sits besides the disused Grand Western Canal. Here we take a footpath on the left that runs along the route of the canal towpath besides the old wharf.

Within a couple of hundred yards we reach the remains of the Nynehead Boatlift.  This is one of seven on the canal and reportedly they were the first commercially successful boatlifts in Britain and operated on a balance principle.  Work was done in the late 1990’s to clear this site and it is now possible to get a good view of the remains.

Our route follows a section of the old towpath.  The Grand Western Canal ran between Taunton and Tiverton and was part of a plan to link the Bristol Channel with the English Channel.  The lower section of the canal between Lowdwells and Tiverton was constructed first, between 1810 and 1814, and passed through mainly flat land.  The second phase linking Taunton to Lowdwells is the part we are now walking along.

Continuing on the waymarked path we reach the B3187 which we cross and continue our route along the footpath, this is part of the West Deane Way.  The well-used fenced route is extremely muddy so it is slow going.

The next section of path has been flooded by the recent heavy rain so we have to negotiate a way through without getting wet feet.

On entering a field we see the clear remains of the canal in front of us, but our route leaves the West Deane Way as we turn left to walk uphill to a stile.

We now head south across fields to reach a track besides a field of solar panels and stay with the track as it passes Tonedale farm and heads into Lower Westford.  At a minor road we turn left and then almost immediately take a footpath on the right which goes down a driveway besides a thatched cottage.  The footpath then enters a field and we continue in a southerly direction on the path towards trees.

After entering the trees we reach a crossing on the railway.  This is a mainline so we cross with extreme care and join a footpath on the far side which heads east through the trees.

We stay besides the stream to reach a tarmac path which we follow to reach lakes next door to the Wellington Sports Centre.

On reaching Corams Lane we turn right and follow the pavement besides the B3187 Waterloo Road.  As this road nears the centre of Wellington it becomes North Street.  At a crossroads with traffic lights we turn left and follow the High Street.   After a set of traffic lights, we continue straight on to pass the church of St John the Baptist.  From here we follow the Taunton Road until we reach the entrance to Cadeside Caravan Park.

Our walk has covered just over four and a half miles.  Thankfully, despite the forecast, we have avoided the rain which arrives soon after when we are already sat comfortably in the caravan.

You can view this 4.5 mile walk on OS Maps (Subscription to OS Maps Required)