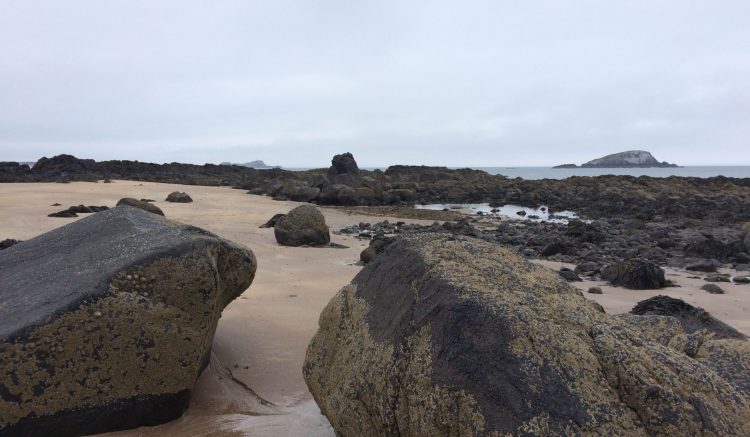 After the exertion of walking up Lammer Law in yesterday’s heat I am instructed to find a flatter walk for today. We thoroughly enjoyed the Fife coastal path last week and I see an opportunity for some exploring in North Berwick as well as a good walk with some coastal views.

It is a fine day when we leave East Fortune Farm CL, but as we near the coast it is cooler and a bit hazy. We park in a small car park on the beach side of Marine Parade, there is space for a dozen or so cars and we admire the view whilst eating our sandwiches before setting off. It is a fine view with a lovely bit of beach in front of us, even on this chilly day it is popular with dog walkers and families. However, leaving the car I notice signs appealing to the Council to save the beach. Intrigued I quickly research this threat and realise there are plans to increase the car park significantly by extending the tarmac a further thirty feet onto the beach.

Thousands of local residents have campaigned against this, but the Council appear keen to stick to their plans. Lets hope at the next local election voters remember which Councillors supported the plan and cast their vote accordingly. 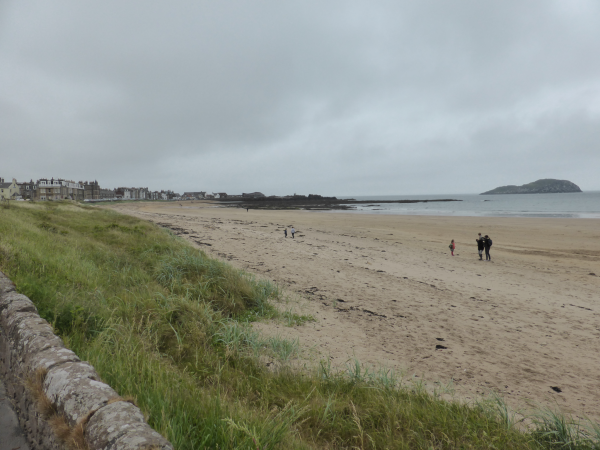 We start off by walking back towards North Berwick along the pavement. It is tempting to head down to the beach, but the boys will have plenty of time to run around later and their playing ball will delay our progress.

After yesterday I was anticipating a warm sunny day, but it has turned a bit murky and chilly. Entering the town we wander to the harbour, the tide is out but there is plenty of activity with folk preparing to head out to sea when the water returns. 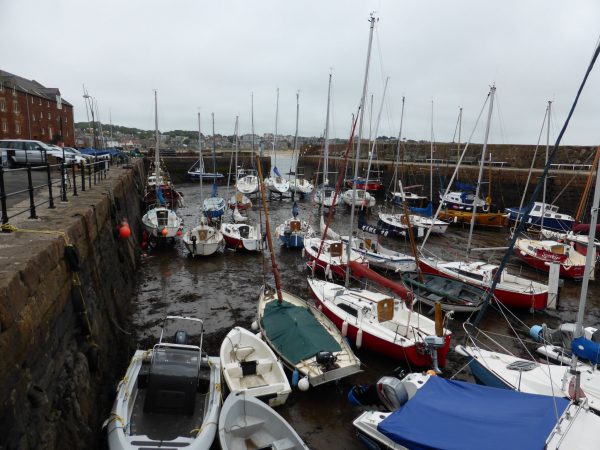 We meander along a couple of streets, every other house appears to have a plaque commemorating someone connected with golf who lived or stayed there in the past. Then after going through a park we walk down to the beach.

Behind us the cloud is covering the top of North Berwick Law, I am told you get cracking views from the top, but obviously not today! 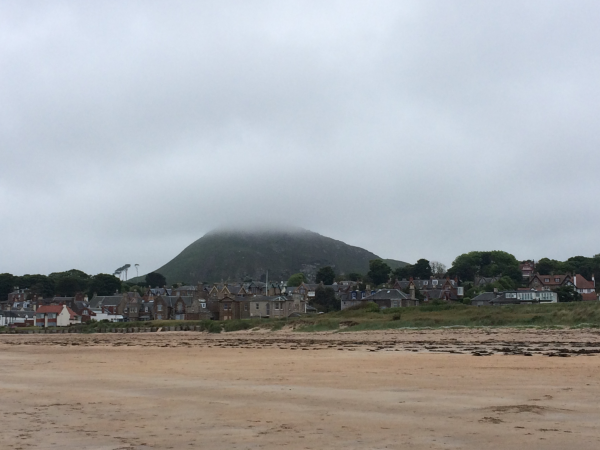 We are on another huge expanse of sand and the boys are soon busy chasing tennis balls. 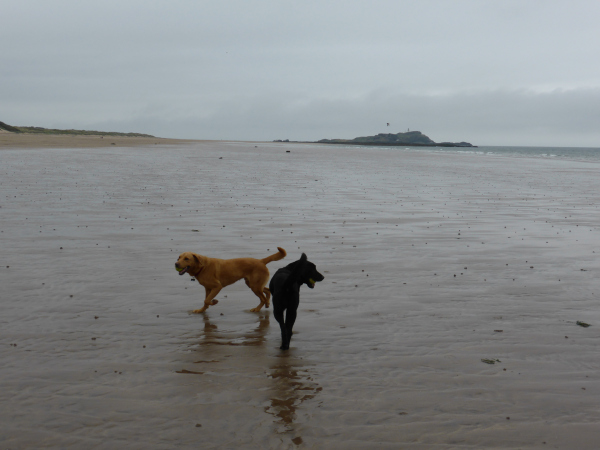 Our route is very straightforward, keep the sea on the right and sand dunes on the left. 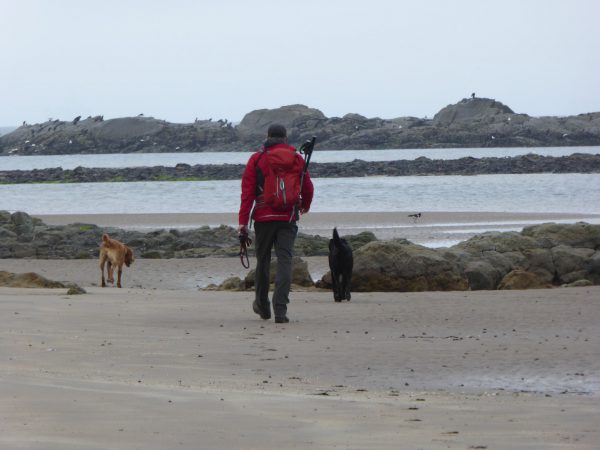 After lots of empty beach we come to some families playing on the sands opposite the island of Fidra. This is probably viewed locally as a crowded beach! 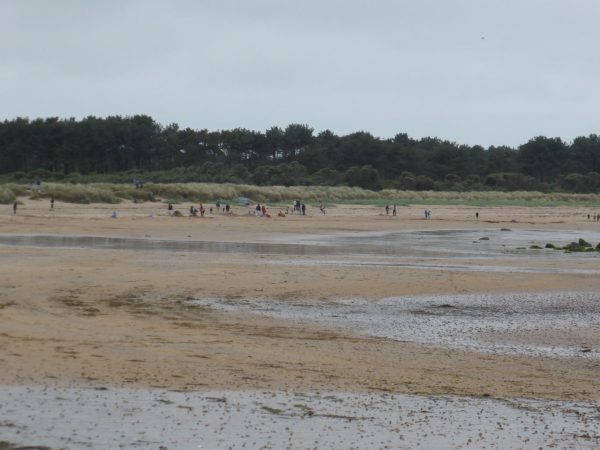 Fidra is an uninhabited RSPB Scotland nature reserve. Apparently Robert Louis Stevenson was a frequent visitor to this beach and his map of Treasure Island is based on Fidra. The island’s lighthouse was erected in 1855 and became the first all electric automated lighthouse in 1970 with the keepers being withdrawn in April 1971. 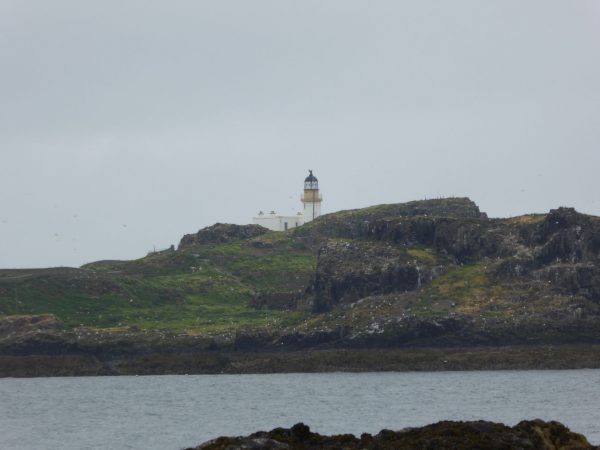 Heading on around the coast there are a succession of small sandy bays and rocky outcrops. Occasionally we see someone in the distance but don’t encounter anyone walking along. 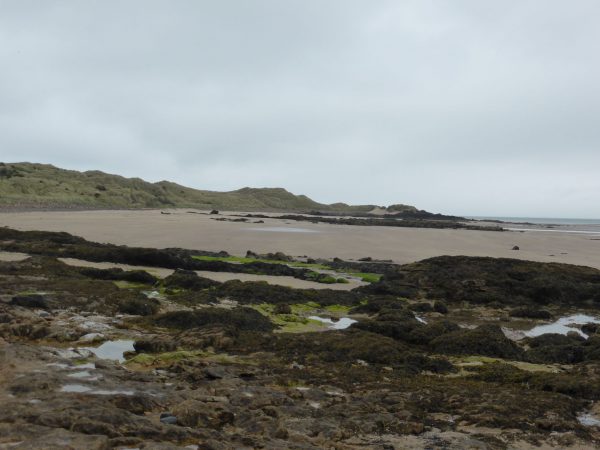 After almost three miles we near Gullane and leave the beach to follow paths through the sand dunes. The map shows a track leading across Muirfield Golf Course and it takes us a while to pick the right route through the dunes to reach the edge of the Course. We bump into some locals who point us in the right direction and warn us there is no access across the course so we will have to go into the village.

Eventually we reach the edge of Muirfield with its fine clubhouse standing on the side of the course. When I have watched the Open Golf Championship from here on TV I have always fancied playing it. On a relatively still day like today I am sure it is a good test of golf, but when the wind picks up it must be a serious challenge. 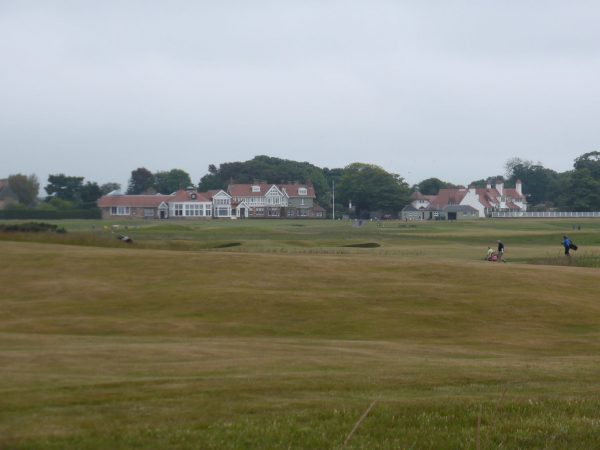 Signs advise that we need to walk around the course, this is a bit inconvenient as I was looking forward to getting a closer look at a few of the holes. This club has recently been in the news for all the wrong reasons, a few weeks ago the members (all men) voted to maintain their ban on women becoming members. Rightly the R&A have refused to allow the Open to be played here whilst this ban remains. Up until now I have found Scotland to be a welcoming and progressive place, but clearly there are pockets that would prefer to live in the past. I hope that sanity wins and the members reconsider their ridiculous stance. Come on chaps what harm can it do?

After skirting the course we find ourselves entering the village of Gullane and follow the roads through a very pleasant residential area to reach the main A198. Here we turn left and head away from the village on the pavement in an easterly direction. Outside of the village the newly laid pavement provides a safe route alongside the main road (although the road is not that busy). There are already signs of weeds poking their way through the tarmac, an early application of weed killer would prevent long-term damage.  Unfortunately, as we have so frequently observed access to capital funding for such projects seems easier than getting funds to maintain them.

We are now on the John Muir Way, a 134 mile coast to coast path across Scotland. John Muir (1838 to 1914) was a Scottish American naturalist, with a passion for preserving natural wilderness and forests he is credited with influencing American politicians to create America’s Parks. We could do with more people like Muir being involved in environmental and political decisions today.

Needless to say our conversation about why in 2016 men would want to exclude women from golf courses (we could think of no good reason) now turns to environmental issues, a frequent topic on our walks. We leave the main road following the waymarker signs into Archerfield Estate.

Reaching a tarmac drive we stop to check the map and are approached by a young couple, the man has a baby on his back. They have lost their bearings, we study the map and they accompany us towards Dirleton. I love these chance encounters, they are away from Liverpool for a few days exploring the area, he is fascinated by our lifestyle and we chatter. Thirty years ago this would have been us, grabbing few days away with a young baby. 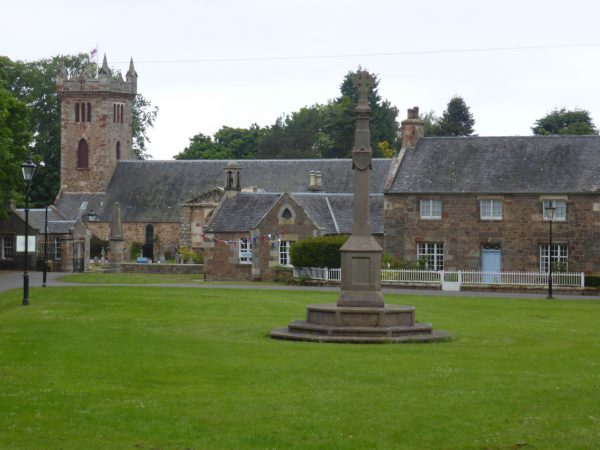 Dirleton looks a pretty village, we stop briefly, but with still over five miles to go back to the car we are soon continuing along the John Muir Way towards Yellow Craig Plantation. A relatively new housing development soon appears on our left, they look to be large houses set in a desirable location, surrounded by golf courses and the beach. I would have once considered this an enviable place to live. But with our nomadic lifestyle it would be wasted on us now.

The car park at Yellow Craig Plantation has loads of space, so must be popular in the summer. Lots of money must have been spent on the smart new toilet block. As so often the case some idiot has decided that the facilities would be enhanced by graffiti and mindless small scale vandalism. I am trying not to evolve into Victor Meldrew, but there are times when you just have to say, “I don’t believe it”.

At Yellow Craig Plantation we contemplate walking back to North Berwick along the beach but opt for following the John Muir way as it heads slightly inland. The trees give a clear indication that the wind blows a bit around here. 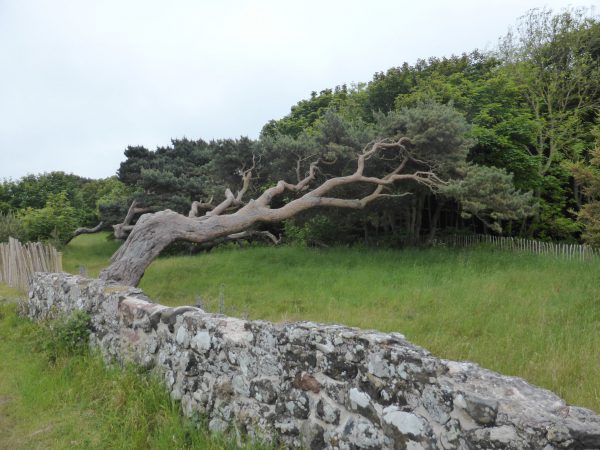 We go through the tallest field of Barley that I can remember, almost six foot high. When I was a nipper crops were grown tall, but over time they have decreased to below waist height, so this is an unusual sight.

We now pass East Links before walking along the edge of West Links. I think we have seen six separate golf courses on this walk, but it is difficult to be sure because they all merge into each other.

After passing the clubhouse of North Berwick Golf Club we see an unflattering wooden statue to Ben Sayers (1857 – 1924). A renowned golfer Sayers started his professional career teaching golf in North Berwick. After an illustrious career he got involved in manufacturing golf equipment. My first set of clubs as a nipper was a Ben Sayers set. 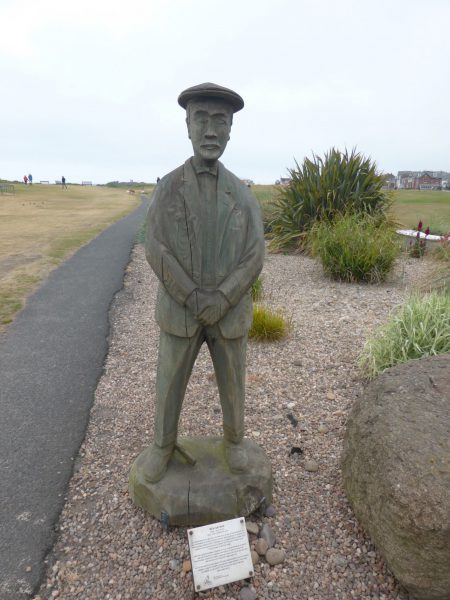 We stroll back through North Berwick to the car park, we have covered fifteen miles, a bit further than Lynnie had requested, but it has been easy going with plenty of interesting to see along the way. The dogs will have noted that there is a fantastic beach close to our site so I think we will be back here before too long. 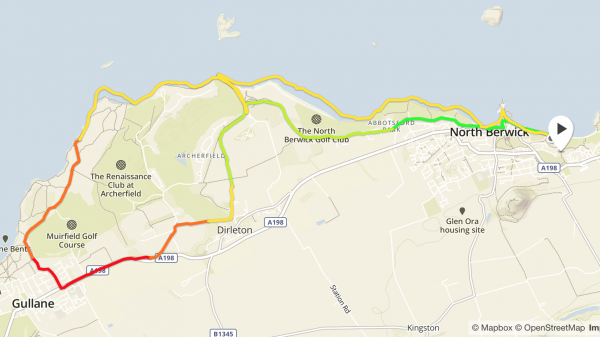