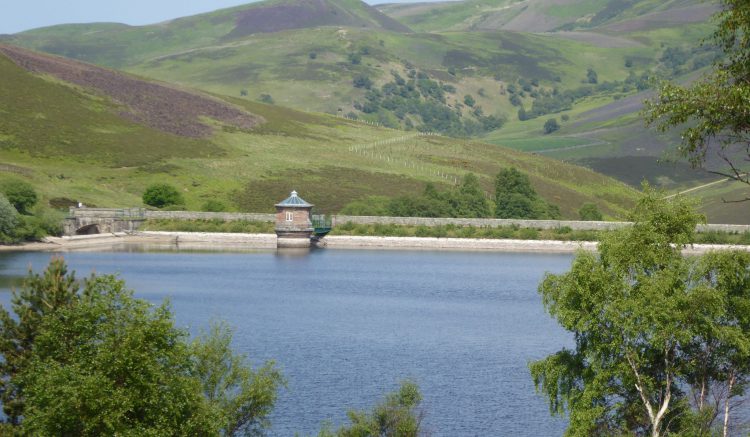 Yesterday was a moving day, we reluctantly packed up at Knockhill CL and headed from Strathkinness to the opposite side of the Forth Estuary and East Fortune Farm CL a few miles outside of North Berwick. We are old hands at packing up and moving between sites and see no benefit in rushing. In the past either rushing to pack up or set up has been the precursor for things to go wrong.

East Fortune Farm provides walks around the edge of a couple of fields ideal for the dogs. They are well aware that they will soon be trekking miles so a leisurely stroll and sniff about keeps them satisfied.

It is a few days since we walked up a serious hill so the map is soon spread out and I am identifying somewhere close by to tackle. We decide that a circular walk taking in Lammer Law looks ideal, not too long but with a good climb and the chance of getting some cracking views.

We take the short drive to our starting point, heading through Gifford and onto Longyester where we turn up a lane to park by Blinkbonny Wood.   Our walk starts by heading up the tarmac lane towards the moor. Along the way we pass a couple of fields with bull bears resting. This is how we like to meet bears, on the opposite side of a barbed wire fence! 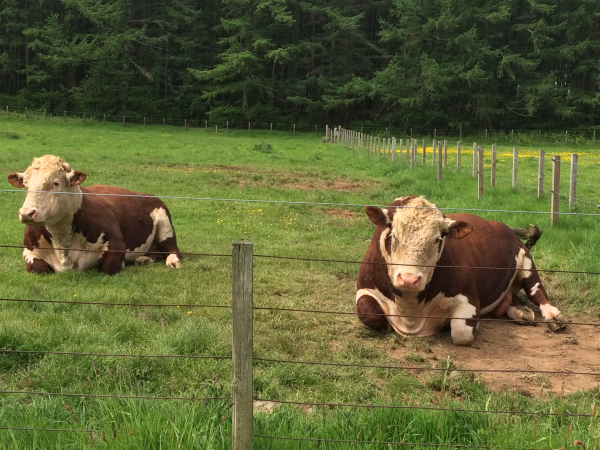 We head through a gate as the tarmac turns to a stony track climbing before us. We stay on the main track ignoring the occasional options to go off left or right. We are accompanied by the constant calls of lapwings and curlews and as we pause to look behind us it is clear we are in for some cracking views. 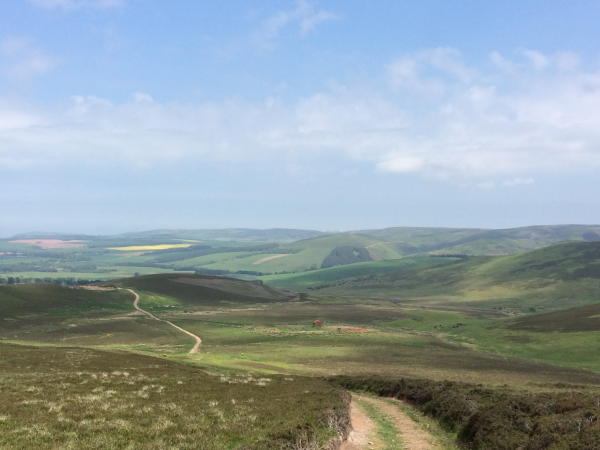 To our left down Sting Bank Burn we get a glimpse of Hopes Reservoir, we will be alongside that later but first need to do some more climbing to reach the summit of Lammer Law. 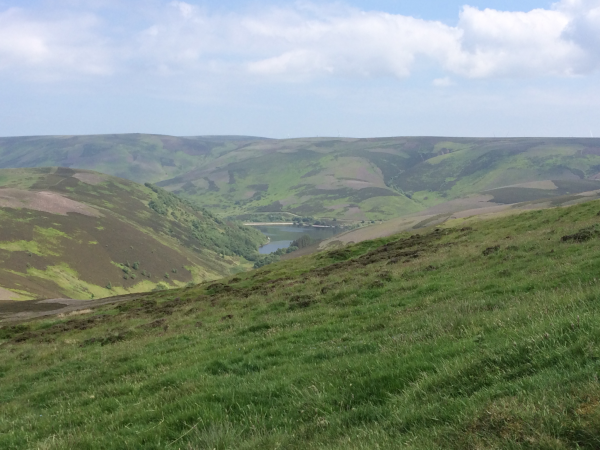 When we walk we chat away about inconsequential things, we don’t carry a television in the caravan and rarely listen to the radio, except when there is a Test Match on. So we have avoided most of the debate around the forthcoming European Referendum, we already know how we are voting and have given instructions to our “Proxy” voter as to where to put the cross. Until we researched how to vote whilst away I was unaware that such a thing as a “proxy” existed for voters in elections or referendums.

Our discussion today centres around how couples with opposing political views manage at times like this. We agree on most things and when we don’t it is generally about shades of the same argument, or Lynnie trying to bring balance to our discussion. I can’t imagine living with someone who disagreed on the fundamental things in life, I suppose people manage their way through such relationships, but it would prove difficult for me and probably for them!

As we chatter we admire the stunning views. There is an amazing amount of “out” out there that the majority of people seldom get to see. 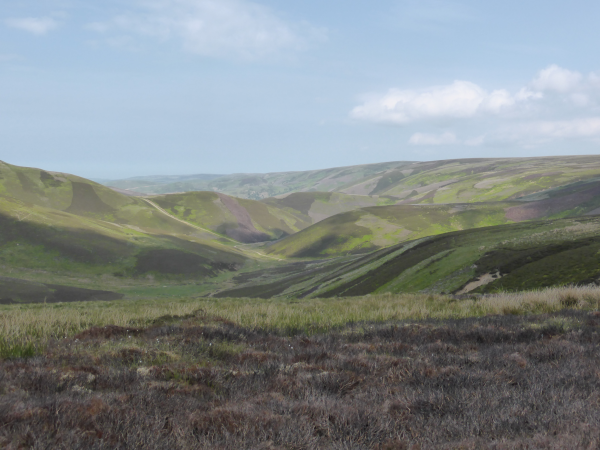 We follow the track through a gate and then when a gate emerges on the right take this, leaving the main track (which later we will re-join further along). Following the fence line we go through a second gate and then turn right to join a gravel track. A few hundred yards on we take the well-worn path on the left to reach the trig point at the top of Lammer Law. 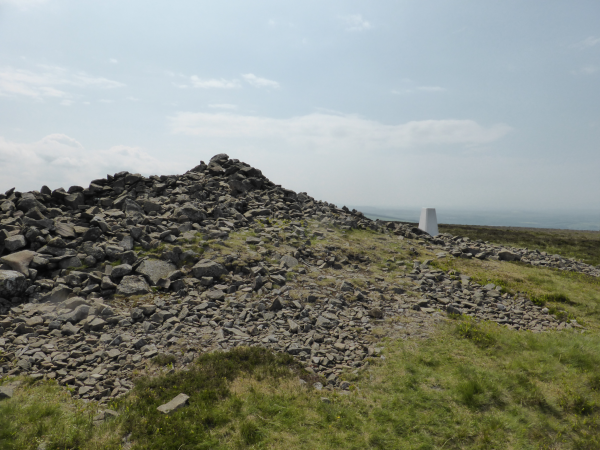 There is a large cairn at the summit that makes an ideal spot for a sandwich and a place to just admire the view. Unfortunately it is hazy in the distance so we don’t get the view we have read about of Arthur’s Seat in Edinburgh and the wide views of the Fife Estuary. But what we can see is fantastic. 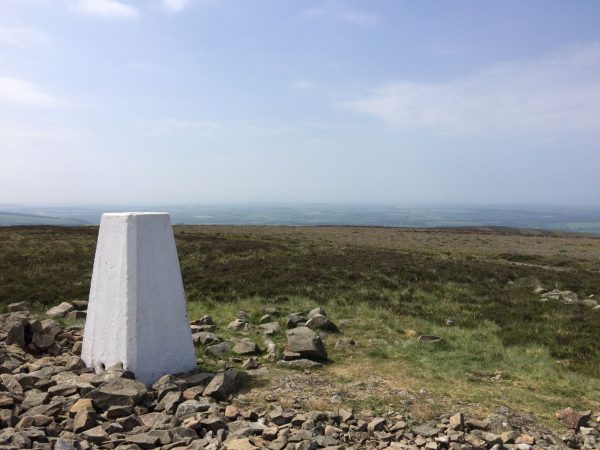 Refreshed we retrace our steps from the summit to the gravel path and turn right to follow this gradually downhill and at a junction of paths we rejoin the main track we were on earlier. After a hundred yards we turn left through a gate and follow this track above Harley Grain. Initially the route descends gradually before becoming steeper as it sweeps around with Windy Law dominating the view in front of us.

We ford a couple of streams providing welcome refreshment for the dogs, though experience has shown that during dry spells mapped streams may cease to exist. I have taken to carrying a collapsible bowl and a litre of water for the dogs, added to our own drinks it does make for a heavy rucksack. 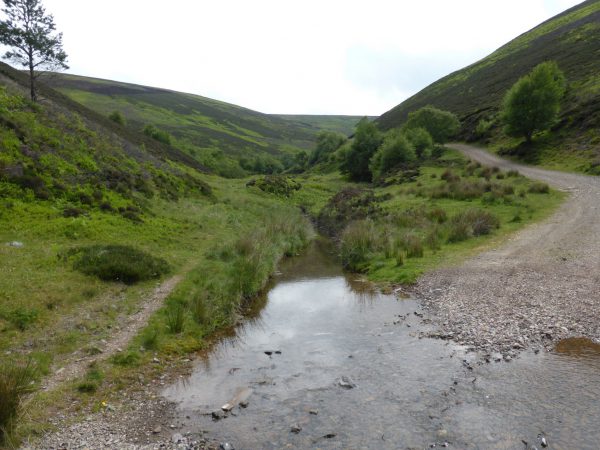 We then follow the track as it skirts around the edge of Hopes Reservoir. This is by no means the largest reservoir we have seen on our travels. But it has to be one of the most picturesque. 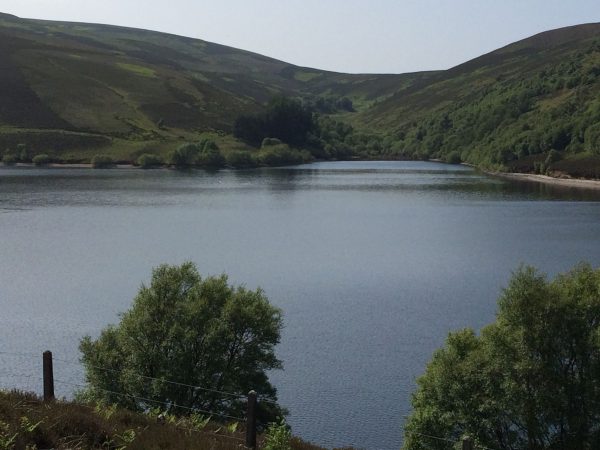 Hopes Reservoir covers approximately 40 acres of land and was opened in 1933. I have read that the dam wall was built using rubble from Carlton Jail in Edinburgh, which was demolished in 1930. That’s an interesting use of the rubble. 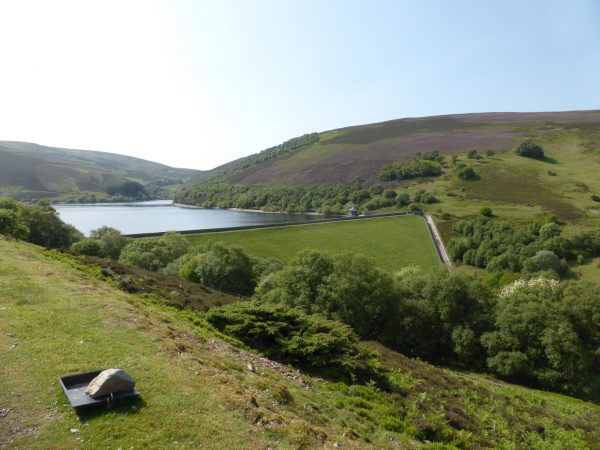 I am intrigued by the man-made conduit we cross after passing the dam. I can see that it flows towards the reservoir but either poor maintenance or bad design would see water heading down the track. It’s the first time I’ve seen something like this, I would have thought enough water came off of the surrounding hills to keep the reservoir topped up without having to build this small channel to get more. Perhaps I am missing something. 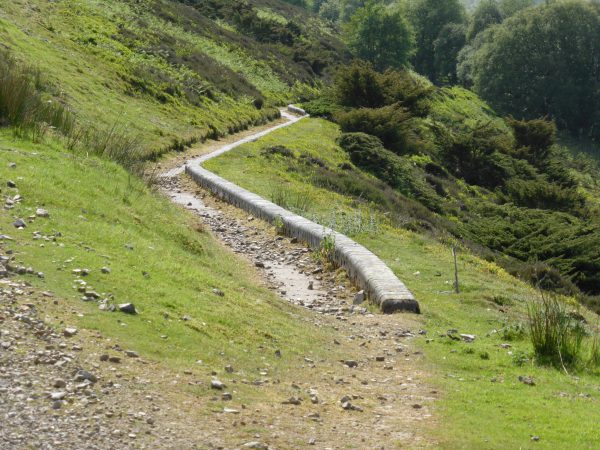 After the reservoir the walk gradually begins to level out and we are on flat ground as we approach West Hopes. Here we go through a gate and follow the farm drive to East Hopes with its small collection of cottages and magnificent entrance to the courtyard, close to the entrance of Hopes Estate. 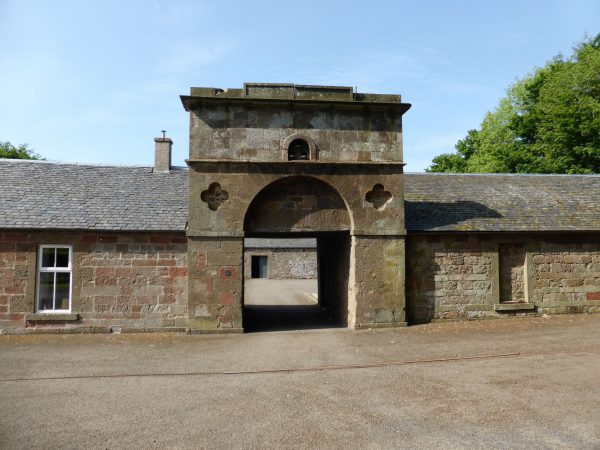 We now follow the tarmac lane back to Longyester and on to Blinkbonny Woods where it is welcome relief to find the car in shade. It has been a warm old afternoon and we have walked just over nine miles. To be honest it feels further, but that might be the heat sapping our energy! There have not many times this year that I have complained of being too hot on a walk. 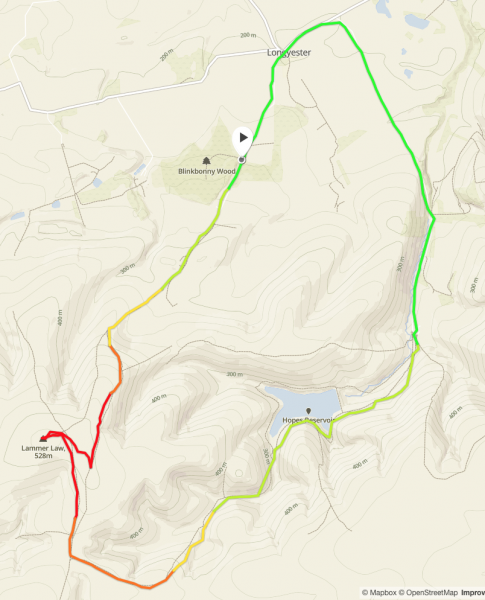