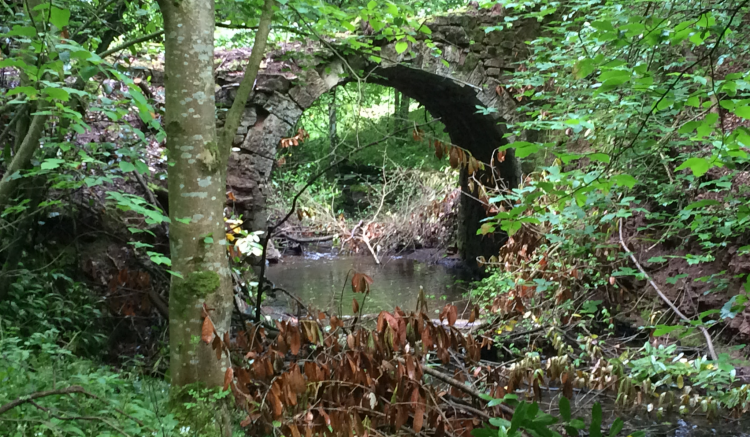 Yesterday was decidedly miserable, the low cloud struggled to clear and it was very cold. Not at all the June day we hoped for, but it did allow me to get my head down and catch up with some work before driving to Dirleton late in the day. We parked at Yellow Craig Plantation and the dogs had a great run on the largely deserted beach, a perfect day as far as they were concerned.

I can cope for one day without much walking but start to get twitchy the following day if we don’t have plans to plod a good distance. Therefore, the map is spread out early on and I have identified a good route in the Lammermuir Hills starting close to Whiteadder Reservoir. When we head off the hills look clear, but as we leave Gifford on the B6335 we see cloud rolling over the hills in the distance.

The cloud descends to meet us as we start to drive up and soon visibility is very limited. Not good for walking at all. Reluctantly, but sensibly, we turn around and head back to Gifford where we consult the map and plot a walk from the village. 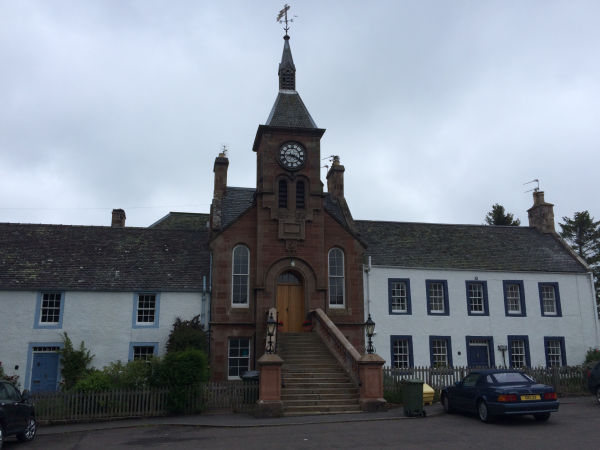 We park up outside of the impressive Town Hall and head south towards the River, following around a playing field before going through housing to reach the entrance of Yester Park. Here we pick up the clearly waymarked path towards Garvald. The path follows a pleasant route through the trees. 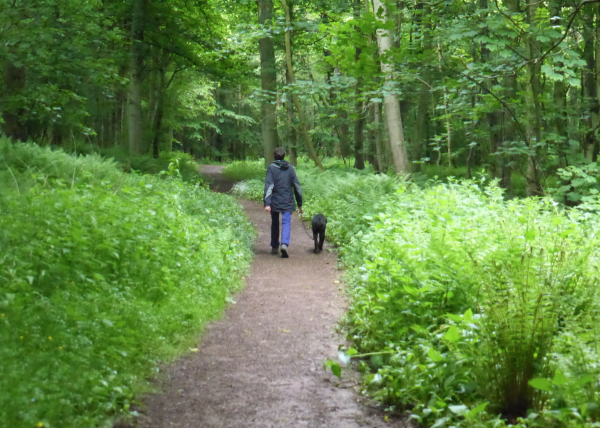 After a while the path descends to be close to the edge of Gifford Water and we follow this route as it frequently crosses the river on old stone bridges.

Sections are a tad muddy but it is not too challenging and pleasant walking. On reaching Danskine Lodge we cross the B6355 and go through a kissing gate to pick up a track that goes alongside Danskine Loch. The woodland has been recently cleared and there is an abundance of Foxgloves, when they are in full flower in a few weeks time this will be a stunning spot. 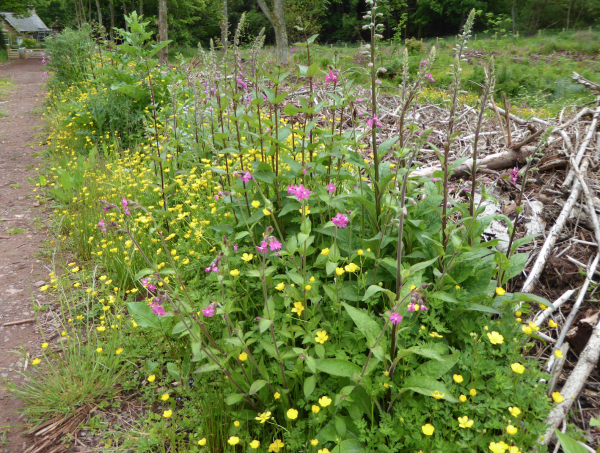 The track soon skirts a couple of fields and then reaches a minor road where we turn right and climb a hill getting cracking views of the Lammermuir Hills, now clear on top! We look at the sky and emulate Christopher Robin “Tutt, tutt it looks like rain”, as it looks decidedly threatening. My fancy Suunto Traverse watch indicates that we have walked three and a half miles to this point, our route back is retracing our steps so we decide it’s time to turn around. 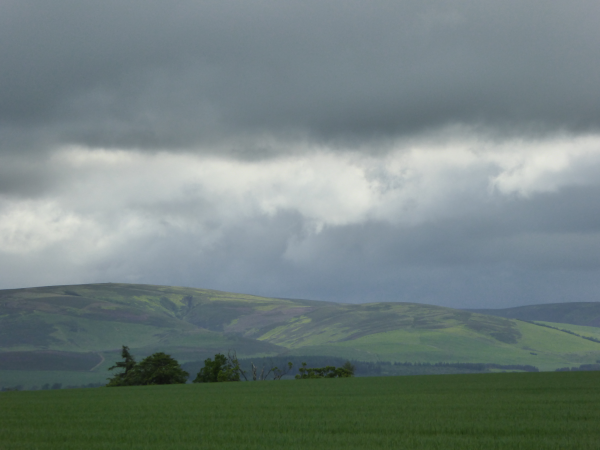 Returning on the same route is always interesting because you get a different perspective and often spot things you have missed the first time. Approaching Gifford we bump into a couple of local dog walkers, they are the first people we have seen all afternoon.

After leaving the Yester Estate we walk alongside an old stone walled paddock. A notice board on the green explains that this area opposite the Tweedale Arms was used in the past to pen animals during the Sheep fairs held annually on 6th June. We are a week too late but there is no evidence suggesting they are still held. 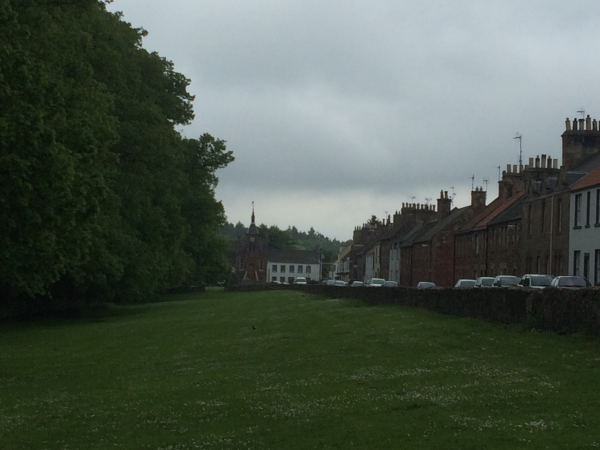 Gifford is an interesting place. Apparently there used to be a paper mill here producing the notes for the Bank of Scotland, this closed in the late 1700’s. John Knox was born here in 1505, he became famous as a leader of the Protestant Reformation and founder of the Presbyterian Church in Scotland. 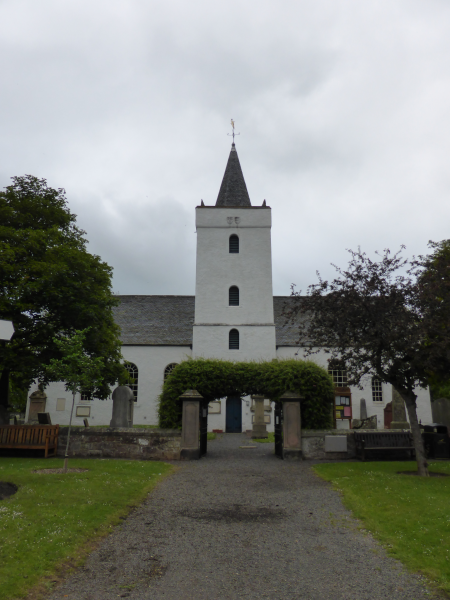 The most interesting thing to us though is tucked away in the corner of the churchyard. This is the grave of Reverend John Witherspoon, born in Gifford in 1723 he became a Presbyterian Minister in Ayrshire before heading across the Atlantic to America. Here he became the Moderator of the American Presbyterian Church and was later a signatory to the Declaration of Independence of the United States on 4th July 1776. 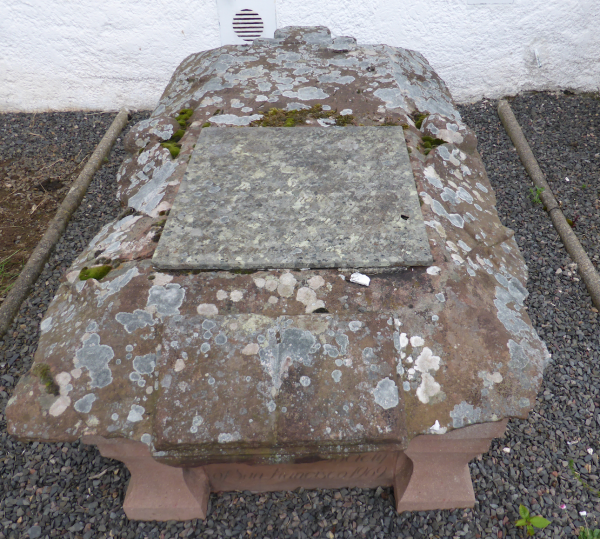 We have chanced upon this interesting bit of history. Had the cloud been higher we would not have stopped at Gifford for a walk. It is a great example of how we travel. On the information board on the green was a line which I have been unable to attribute but it seems very apt for our nomadic lifestyle.

“Tread quietly and linger not lest goblins guide your steps”