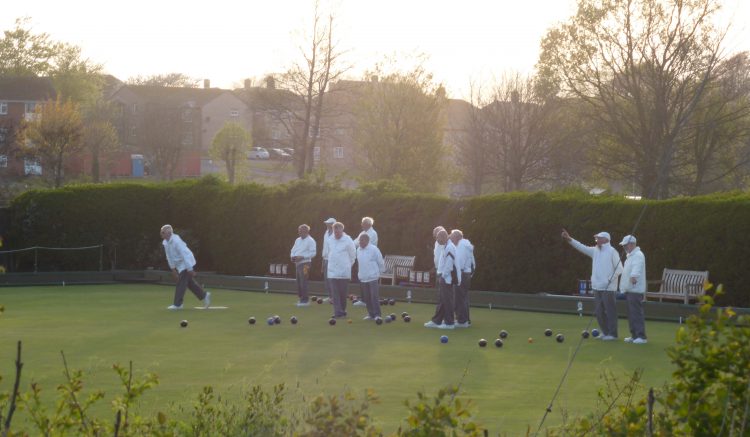 The forecast is not good. We awake to rain, we are moving on so the awning has to come down. We are not complacent after last week’s victory and treat the monster with respect. It responds accordingly and behaves. I have a sense that this is a bit like trying to train the dogs, every time you think you have cracked it they show you that they are still in charge. Sit! When I decide to.

All packed and we head Westward. We have been on St Leonards Farm CL in Corfe Mullen for eight nights. It is a good site and David who runs it very welcoming. Easy access for dog walking and we have thoroughly enjoyed our treks in the Purbecks.

As we drive around Dorchester it is pouring with rain. Along the A35 over Askerswell Down the visibility is very poor, less than 100 yards. Lyn tells a story of coming out here regularly when she was in her teens. Apparently there was a nightclub on top of this hill!

We arrive at our site near Bridport and the awning goes up with ease. A short stroll into town to get our bearings. Exploring the side streets we come across the bowling green and the male members of Bridport Bowling Club are out for an early season roll-up. My father is eagerly awaiting the start of the season it will see him playing most days and travelling around the country with his woods. My mother was an excellent bowler, playing at the National Finals in Leamington Spa on a number of occasions. About fifteen years ago I played for a few years and was half decent, but it was difficult to commit the time and play golf too.

Back at the Unicorn we open a bottle. When we left home Roger and Caroline, from across the lane, kindly gave us a bottle of fizz as a going away gift. Time to crack it open.

We have only known Roger and Caroline for a few years, but they have become good friends. We miss their company and banter. As a Saints fan it is not natural for me to take to someone who goes to Fratton Park to watch football. I like Roger. When he moved in his side were in the Premier League and had just been to Wembley for an FA Cup Final, the Saints were on the rise back from League One. He had bragging rights. Now things are different! But I try not to gloat, (Well not a lot!).

We toast Roger and Caroline and our other friends back home as we plan our adventures in a new location.