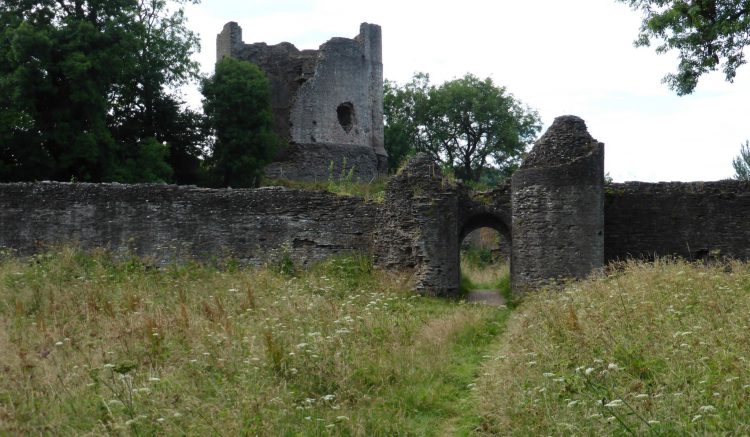 We have been fortunate with the weather on this trip, it is another warm and sunny day.  Too hot for a mammoth trek.  We might be able to cope but Mr Dexter struggles in the heat so we need to be sensible on days when it gets too hot.  Lynnie and I are not too good either when the temperature climbs above 24 degrees.  It is surprising how I talk about temperature in Centigrade rather than Fahrenheit (when did that happen?), what I should have said was we struggle over 75 degrees.

When walking in the Black Mountains a few days ago we had contemplated extending our walk to climb the ridge on the eastern side of Llanthony to follow the Offa’s Dyke Path for a few miles.  Time was against us so we settled on tackling that ridge another day – today is that day.

It is an interesting drive from Ashley Farm CL, we encounter delays around Hereford due to roadworks and then the final section going into and out of Longtown is down narrow lanes.  When we arrive at the car park (Grid Reference 298299) on what is termed locally as the mountain road (the name gives you a bit of a clue that this is a narrow road with a few steep sections). 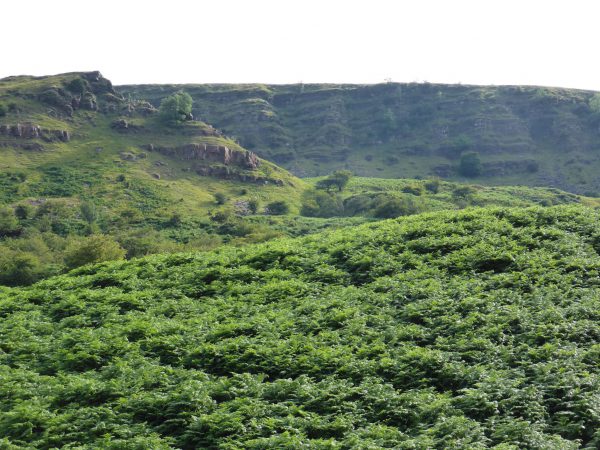 During our drive from the CL we have been listening to Test Match Special on the radio and as we arrive Joe Root is near to scoring 150 at Old Trafford against Pakistan so we sit in the car and listen to the commentary.  The view is stunning.  I cannot say when I first started listening to TMS but I would guess it was at least forty-five years ago, but it could be nearer fifty.  A couple of weeks ago Lynnie and I took Dad to see Aggers and Tuffers at the Mayflower in Southampton, it was a very amusing evening.

There are so many special moments listening to TMS, some amusing and others that move you to tears.  A few weeks ago we were listening to the lunch interview when Aggers interviewed Graham (Foxy) Fowler, we both laughed at the stories and then cried when Foxy talked about living with depression.  Let’s hope that hearing people like him talking so eloquently about mental health will help lift the stigma that is attached to a medical condition that affects at least one in four of us.

Leaving the car park we walk south back along the road that we drove up earlier.  This route is below the ridge, but with fine views across the valley. 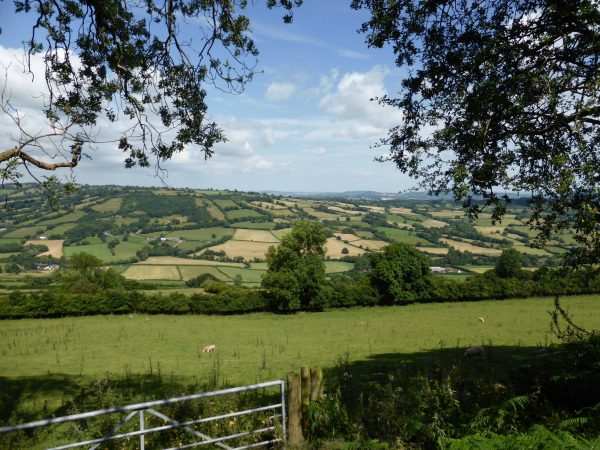 As the road sweeps left towards a cattle grid we leave it to continue straight ahead along a track and follow this as is heads almost straight before us.  It is stunning walking and we are looking forward to getting up onto the ridge to fully appreciate the views. 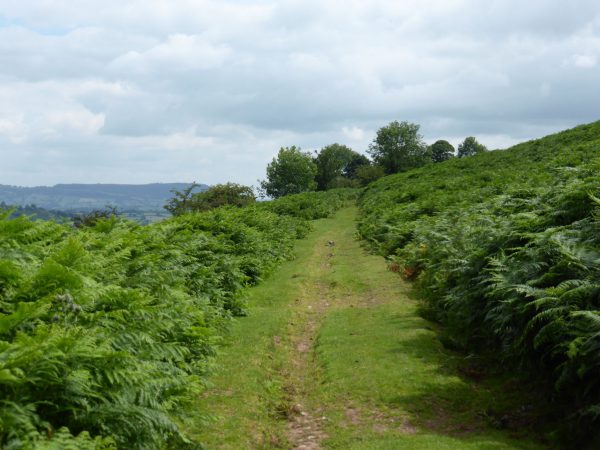 We go through a number of gates, ignoring the footpath sign taking you to the ridge, our ascent is further along.  However when we reach the point where we intend to go up, shown as a footpath on the map between the ruined Pant Farm and Penywyrlod, we discover the path is overgrown with bracken.  When I say overgrown I mean that it is above my head, in my younger days I was six foot, not sure I am still that tall, but if the bracken is over my head Lynnie must feel like she is about to enter the Amazonian Rainforest.  We do about fifty yards, but I feel like we have joined the Wherdfucrwe Tribe and decide it would be sensible to turn around.

I am sure that six weeks earlier, or in Autumn, the path would be easy to identify but it is not pleasant and why bother when there are other routes.  We walk further along towards Penywyrlod, but soon realise that we are still unable to gain access to the ridge, so turn around and retrace our steps along the track.  Our journey out has covered three and a half miles so as we walk back we contemplate our options.  Option one is to identify a footpath and struggle up to the ridge in the scorching hot sun, option two is to head back to the Coachman and drink the cold Guinness that is waiting in the fridge. 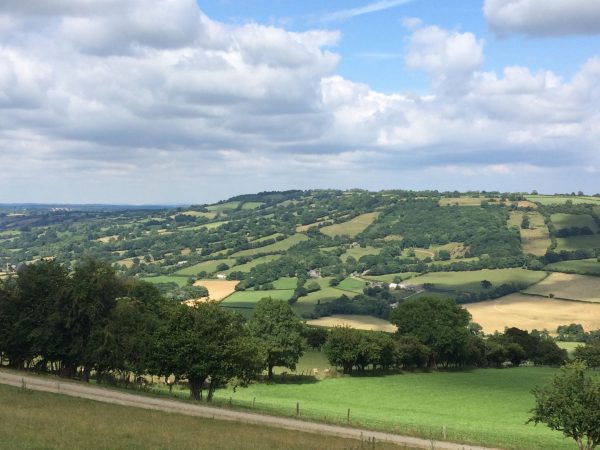 You may know how keen I am on hill walking, but the call of the Guinness wins!  (It must be my maternal Irish ancestry – I am sure that I could qualify to play football for Ireland – the only thing stopping me is that I am close to sixty and have always been shite at playing football – if my great grandmother had been Scottish I might still have an international career ahead of me!).

Our walk has covered almost seven miles, not the walk we envisaged, but it has been good to be out admiring the views.  We will have to return here earlier in the year before the bracken is so high and complete our planned route.  In the meantime we have appreciated this stunning bit of country.  Once again we have not seen a soul, there have been plenty of sheep about and evidence of bears, but not a single person to greet.

Back in the car we drive to Longtown and stop at Longtown Castle.  This is run by English Heritage and has free entry.  From the road it appears that there is not a great deal to see, but actually the site is amazing.  There is the clear outline of the bailey and the keep on the motte is very well preserved. 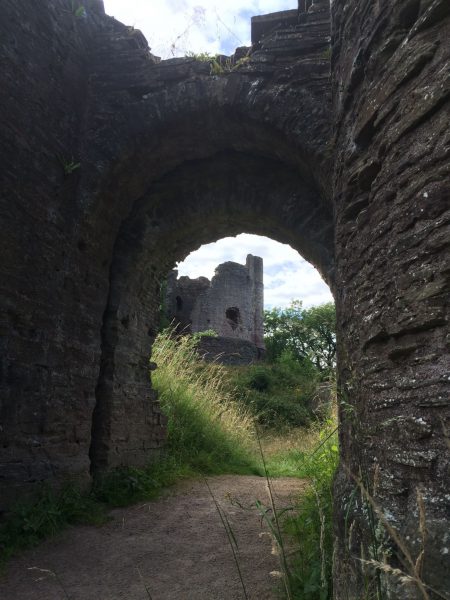 I find these places spellbinding, walking through the archway into the bailey and imagining those who have crossed this threshold in previous centuries is mind blowing.  The castle was built in the 1180’s by Hugh de Lacy.  The striking keep on the motte was added in the 13th Century. 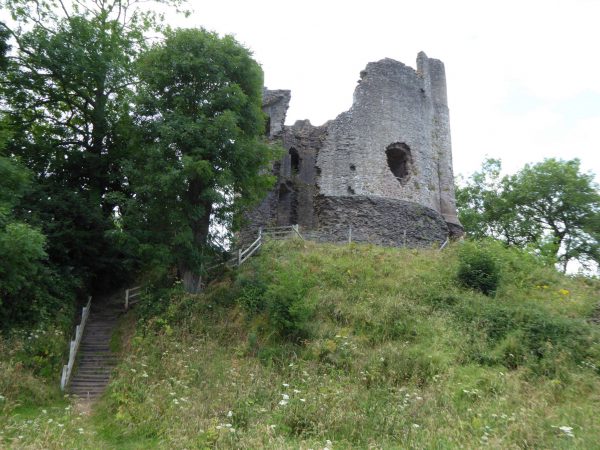 The castle was abandoned in the 14th century, but when our old friend Owain Glyndwr sought to reclaim Wales the castle was refortified, but its revival was short lived and it soon fell into disrepair.  If you are in the area it is well worth a visit, though amazingly, late on a Saturday afternoon in July we are the only people here. 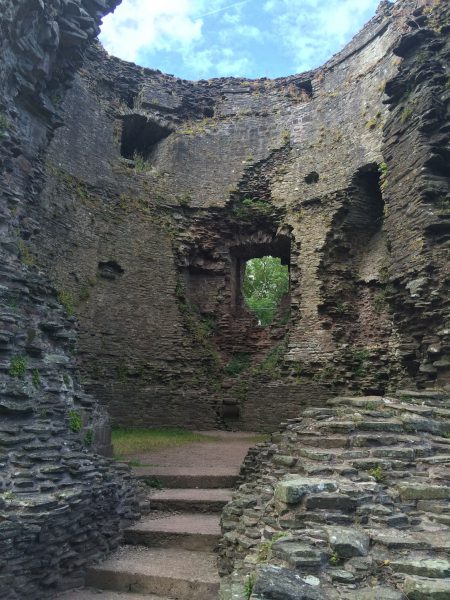 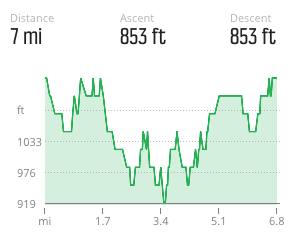