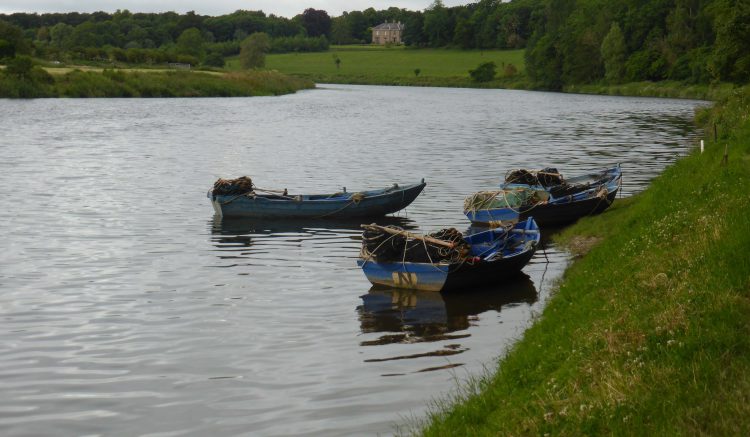 No awning to take down so a very straightforward departure from Durham. We have enjoyed our few days at the Rowing Club and will definitely return to Durham in the future, however next time we will plan to miss graduation week. The City has been busy and negotiating the streets with two dogs through the throngs of people in their finery has not been easy.

Staying at the rowing club has been interesting. There have been rowers of all ages venturing onto the river and just watching the preparations before the boat goes in the river has been interesting. In the bar the conversation seemed to focus on obstacles in the river (a fallen tree) and how close anyone had come to falling out of the boat. I suppose similar to conversations that I have at the golf club about missed putts or the length of the rough. One thing that you do not see at the Golf Club is the quantity of Lycra, it would definitely be in breach of the dress code.

I think I will give rowing a miss. I am not keen on falling into rivers, an experience I encountered once in Bedford with an unpleasant dip in the Ouse (my mucker Maff dived in to pull me out, if he hadn’t I would probably not be here today).

A few hours drive north on the A1 and we arrive at our site just outside of Berwick-on-Tweed. We will be are staying on a CL at Paxton House. After getting everything pitched we pop into Berwick for provisions, this looks an interesting town. Later in the evening we stroll in the grounds of the House.

One of the advantages of being this far north is that it hardly seems to get dark. So at 11.00 we can see clearly as we walk down to the River Tweed. As we turn a corner we see activity on the riverbank ahead. As we approach we realise that a group are fishing.

A chap from the group (later we find out that he is known as Keyhole) explains that they are fishing for salmon using nets. I have never seen this before and he tells us that it is a traditional method of fishing in this area. One chap stands on the riverbank holding the rope at one end of the net whilst his partner rows out across the river and after a while completes a loop back to the riverbank, the nets are then hauled in to see the catch.

Keyhole tells us that his grandfather and father used the same method before him and tonight part of the team includes his wife, son and grandson. Apparently in the past there were dozens of groups on the Tweed using this method of fishing. Now Keyhole and his family are the only ones left.