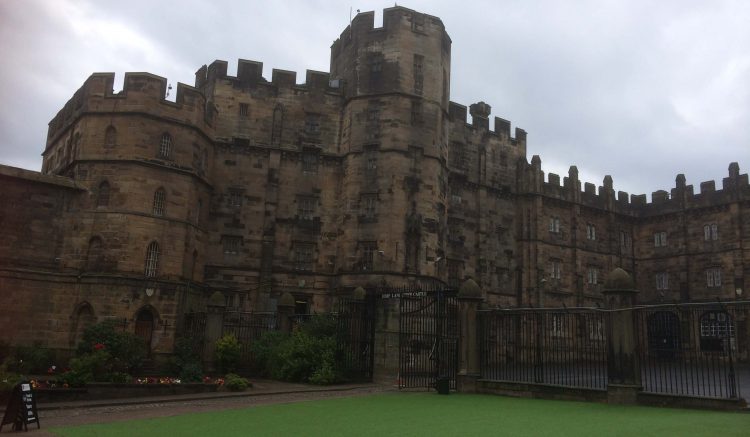 Freddy and the boys are off for a walk in the Forest of Bowland meanwhile I am exploring Lancaster. I had fully intended making a trip to the Castle this week, a decision made easier by Met. Office warnings of thundery heavy rain and hail storms for later today.

Freddy drops me off in Lancaster and I wander around, initially to get my bearings. Seeing a signpost for the Cathedral I decide to head there first. The Roman Catholic St Peter’s Cathedral is not as imposing as many others I have visited. I later find out that it was built in a Gothic Revival style and completed in 1901. It was originally a parish church before being elevated to the status of cathedral in 1924. All the doors are closed and no one is about, I enter through a side door and wander around. I don’t stay long as I find it a bit eerie being the only person in this large echoing space. Outside it has begun to drizzle so I make my way through the main shopping street towards the river and up the hill to the Castle.

The Castle can only be viewed by guided tour and the next available space is at 2pm. Just time for a spot of lunch in the Castle Cafe, a rare treat, after three months of mainly picnic lunches carried in the rucksack and eaten in the great outdoors. I deliberately avoid the sandwiches and plumb for a Greek Salad and cappuccino. Almost too soon it is time for the tour, the guide is brilliant very informative and amusing.

The Castle is part of the Duchy of Lancaster and therefore, owned by the Queen. It has had a chequered history besides being a fortification it has been one of Europe’s longest serving prisons, first used as a prison in 1196 and housing prisoners until as recently as 2011.

It’s early history is unclear, no one knows when or by whom it was built, but it is thought to have been built in the 11th century on the site of a Roman fort. Our tour commences outside at the keep, the oldest remaining part of the castle. The fortification has undergone many changes and additions and partial demolitions over the years.

From here we proceed, through locked doors, to an area that was originally built as a debtors prison, no photography is allowed here as this part of the castle also houses both a civil and criminal court which are still in use. The dock in the criminal court still retains metal clasps used to keep your hand still whilst you were branded. Many witches faced trial here including the famous Pendleton Witches who were sentenced to death here in 1612. George Fox, founder of the Quaker movement was imprisoned in the castle for 2 years.

The Grand Jury room has some fine Gillow furniture and the Shire Hall a grand display of heraldic shields.

The tour included the dungeons where you can briefly be locked in and finished in part of the building housing cells used until 2011. 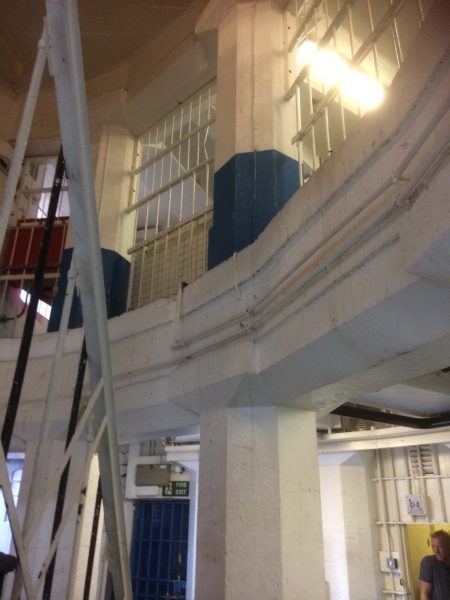 Having made my escape, I head downhill to the Quay area and cross the Lune Millennium Bridge to view the Quay and two other bridges. I then return to the city centre to remind myself of what wandering around the shops is like, before making my way to the railway station to meet Freddy and the boys.

Just before the station I pass the Quaker Meeting House. There has been one on this site since 1677 making it the second oldest place of worship in Lancaster after the Priory Church (next to the castle). George Fox was stoned through the streets by a hostile mob after preaching in the Priory Church in 1652.

I have enjoyed my day, lots of interesting things to see, a good lunch, the storms missed Lancaster and I got out of jail. 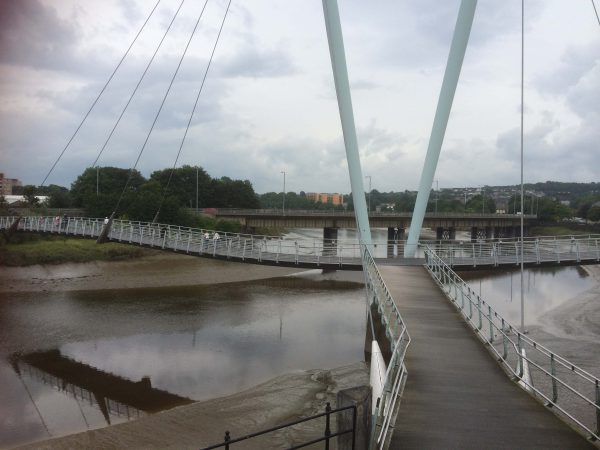