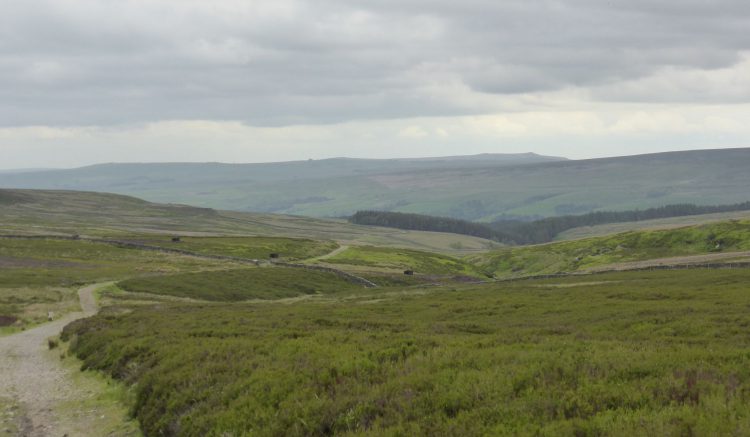 We have moved south after nearly five weeks in Scotland, we have thoroughly enjoyed our trip “north of the border” and are already talking about doing another tour in 2017.  Our journey south down the A1 has taken us to just outside of Ripon.  Our pitch is now on West Lees Farm CL near the village of Kirkby Malzeard.

The Yorkshire Dales is one of our favourite locations, so it is fitting that our first night here was our 365th night in a caravan.  I should clarify that it is not 365 consecutive nights but cumulative since we first started caravanning in 2012.  It seems a good reason to celebrate so a bottle of fizzy gets cracked open. 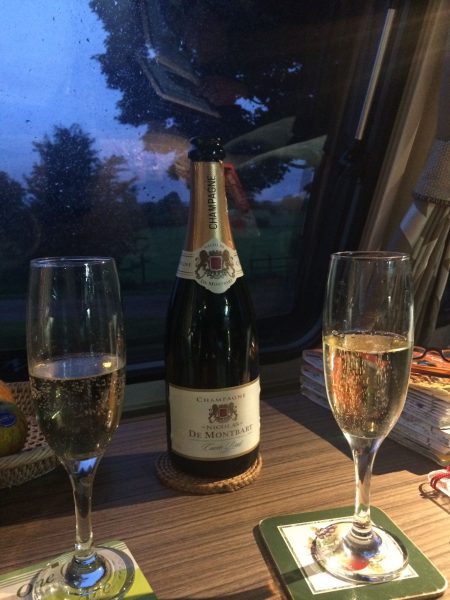 We have not previously walked in and around Nidderdale so this is new territory for us to explore.  After a moving day I always try to drive as little as possible so today’s walk is very close to our site.  We head for a small car park (SE 181726) at Tom Corner on the edge of Kirkby Malzeard Moor.

On leaving the car park we turn left to walk along the road and at a junction fork right following the road signposted to Dallowgill.  Just before reaching a cattle grid we turn left to follow a footpath with a dry stone wall on our right.  As we head towards the brow of the hill we stop to look over the wall at Greygarth Monument. 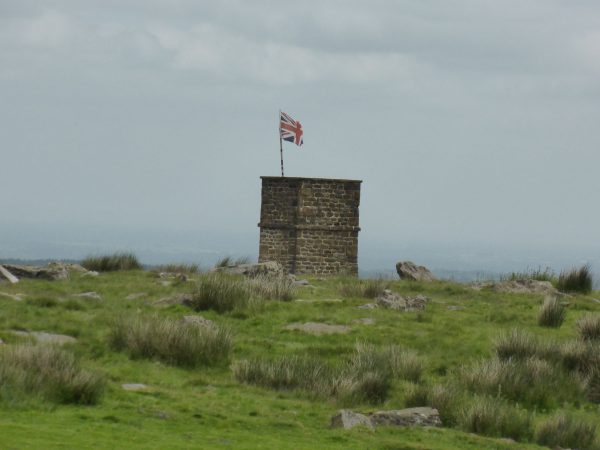 This monument was erected by local people to commemorate Queen Victoria’s Diamond Jubilee in 1897 and had restoration work carried out in 1984.  It appears to stand on private land without public access, so we are unable to get any closer which is a pity.

The bit that really interests me is that the current monument replaced a tall tower that was built on the site to commemorate the extinction of wolves from the surrounding moorland.  That tower blew down during a storm in 1890.  Or perhaps a lone wolf was still around and huffed and puffed until he blew the tower down!

Over the hill the path leaves the wall and becomes indistinct as it heads across Swetton Moor to the road heading back towards Kirkby Malzeard. 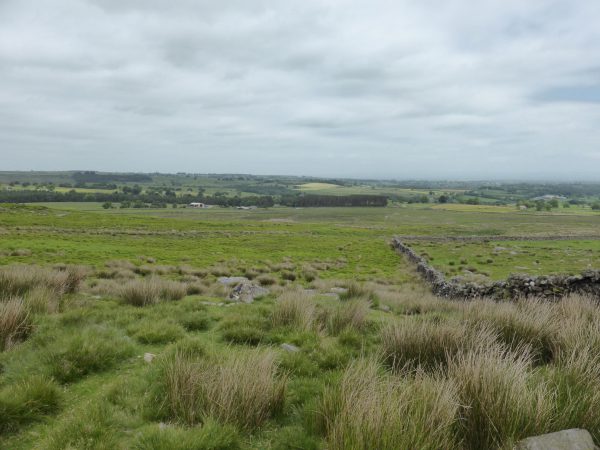 We join the road and walk along, over a cattle grid keeping to the road looking for a footpath through the trees on our left.  It becomes clear that this is now overgrown so we continue along the road.  It is very quiet and the only distraction is the number of dead rabbits in the verge.  Both dogs need to be encouraged (dragged) along on a short lead.

At a bridleway on our left we join the Ripon Rowel Walk, this a broad track that leads steadily uphill.  By the side of the track we spot a mosaic, it is one of 22 mosaics along the 7 mile route known as the Crackpots Mosaic Trail.  The trail was created to celebrate the designation of Nidderdale as an Area of Outstanding Natural Beauty.   This mosaic is a wild rose and number 7 on the trail. 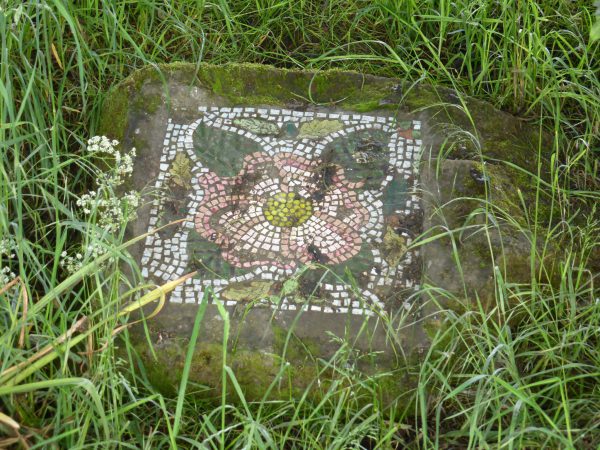 On reaching a farm our route doubles back through a farmyard where we run the gauntlet of numerous chained up collies.  Luckily we are out of their reach as they are not at all welcoming.  After the farm buildings we turn left to follow a broad track and soon pass Carlesmoor Sighting Tower on our left. 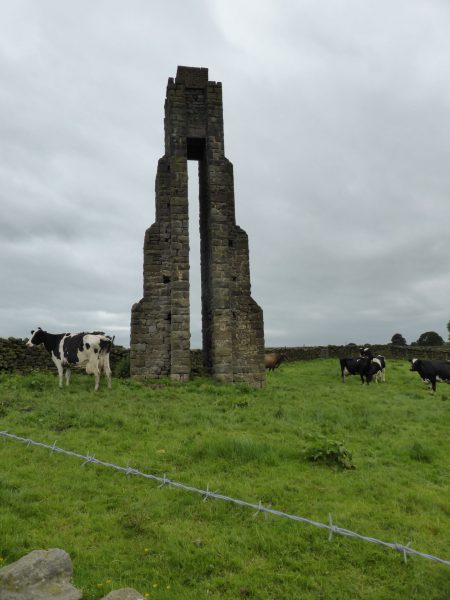 I am not sure to the purpose of this tower and a later Internet search was not enlightening.  However, a conversation with a local in the Queens Head at Kirkby Malzeard suggested that the tower was strategically placed when there were proposals to turn the valley into a reservoir.

Our route continues downhill coming to stepping-stones to ford Ellershaw Gill and then crossing Stock Beck Moor to reach a bridge over Stock Beck.  On reaching a road we turn left and walk along Brown Bank Road until taking a bridleway on our left that passes Newlands House.  The fields behind the farm have adopted a modern (faster) version of a dry stone wall.  These are substantial bits of rock; it must have been interesting watching the construction. 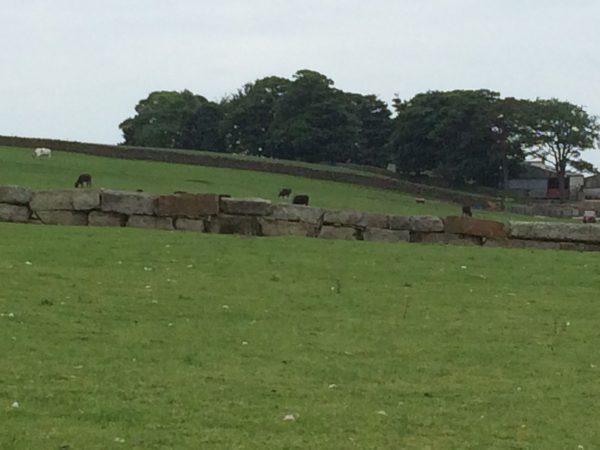 We pass through a gate to return to the moor, the route is clear as we follow the broad track turning as it crosses the moor and heads to Sandy Hill.  This is stunning walking, a couple of bikes pass us, but apart from them we appear to have this vast moor to ourselves.

To our right we see another sighting tower on Ilton Moor. 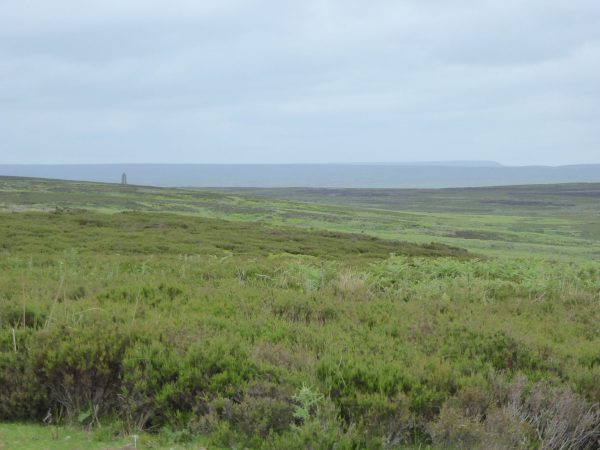 Then there are fine views over Roundhill Reservoir.  Suddenly, out of nowhere, the gorge at Arnagill appears, it is amazing as we have had no indication of it as we have approached. 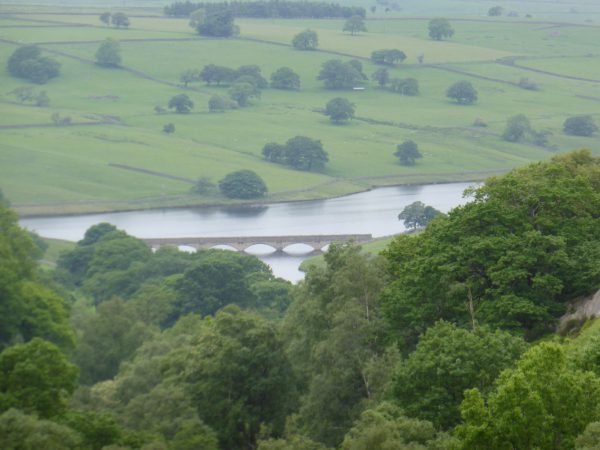 Our route continues uphill and then we take a turning on our left besides a boundary stone, we are now following the Six Dials Trail steadily downhill, soon on our right is Lul Beck.

Walking on these stony tracks is surprisingly hard going, there is no give in the ground and it is wearing on the legs.  However, the views make the effort worthwhile.  On reaching a T-junction of paths we turn left to head back up hill.  To our right are views across Gouthwaite Reservoir. 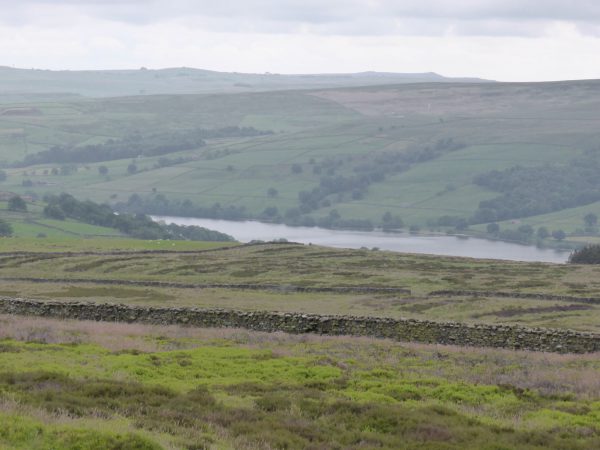 Again the route is straightforward we are following the track across Covill House Moor.  We are accompanied by the constant call of Curlew’s, it is as if they are monitoring our movement across their moor.

At Stope Bridge we are at the head of the stunning Dallowgill and the stony track becomes a rough tarmac road. 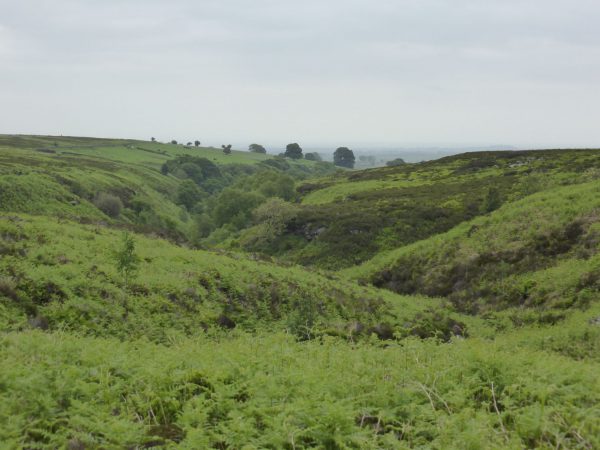 The route continues along the tarmac road for about a mile and a half and then we are back at the car park.  Here we spot another of the mosaic tiles that form the Crackpot Trail. 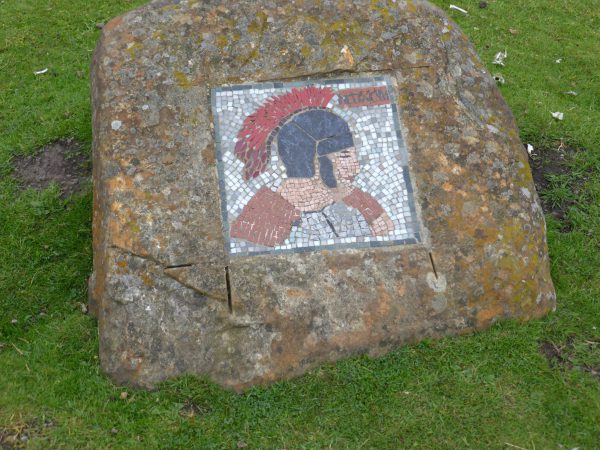 Our route has covered just about twelve miles, it has been a thoroughly enjoyable afternoon and a great introduction to Nidderdale.  I am looking forward to exploring this area over the next week or so. 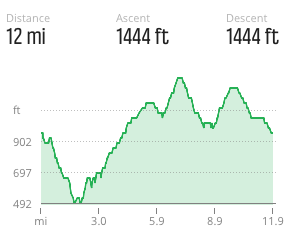