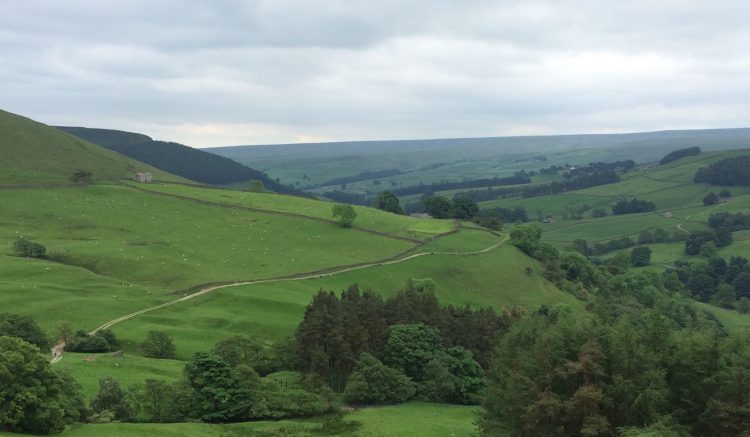 After our wonderful walk across Kirkby Malzeard Moor yesterday we are keen to get out and explore more of Nidderdale.  The starting point for our walk today is Middlesmoor.  This is a pleasant drive from our site at West Lees Farm CL.  I put my trust in the car’s satellite navigation system and it delivers us to our planned destination, but I was glad of the Freelander’s ability to manage some steep climbs and descents.

We manage to secure a spot in the small public car park in Middlesmoor.  For some reason previous visitors to the spot think it acceptable to allow their dogs to foul the car park and not clear up after them.  As a dog owner I find such behaviour unacceptable, there is no excuse.  We pick our way out of the car park and turn left to walk on the road down through the village passing the Crown Hotel on the way.  I hope to sneak a crafty sharpener in there on the conclusion of our stroll. 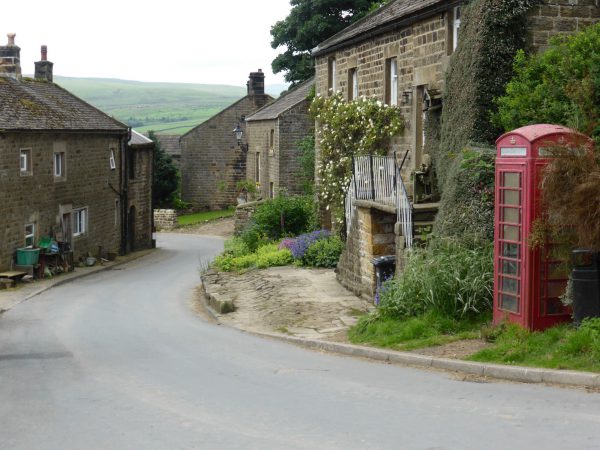 We follow the road out of the village as it descends steeply towards Lofthouse, there is a footpath that goes between the two villages, but this crosses fields of bears so we have decided on caution and follow the road. 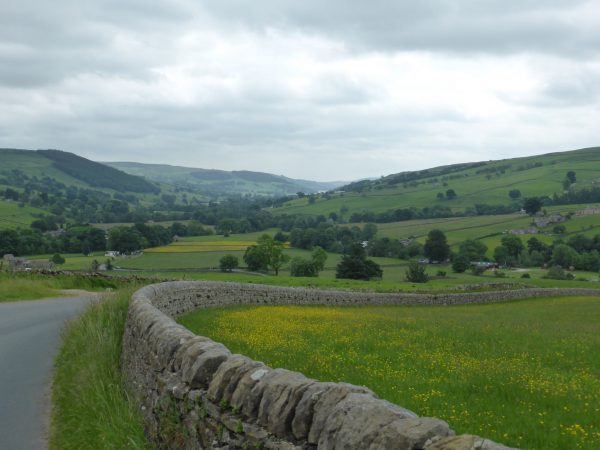 Shortly after entering Lofthouse we turn left and walk up passing the Crown Hotel.  It is always confusing when adjoining villages have pubs of the same name, you would have thought that someone could have thought of a different name.  This pub has a chicken stood on the doorstep.  Which is odd, I am not sure if she has just come out or is contemplating going in, or has been told by her owner to wait whilst he pops in for a pint. 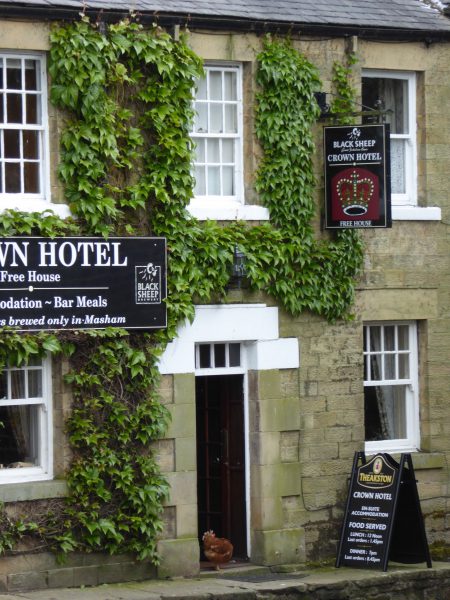 Or perhaps it answers the old riddle “Why did the chicken cross the road?” evidently to get to the pub! 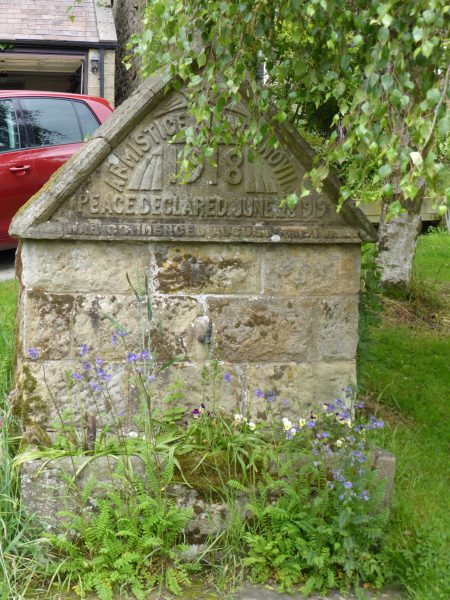 The road climbs out of the village and at a bend to the right we carry straight on along a track and soon go through a gate to follow the Nidderdale Way path markers.  The route is a track (Thrope Lane) that crosses a field.  We can see recent evidence of bears so proceed with caution.

Walking across the fields with Moor Edge and Thrope Edge above us has that typical feel of being in the Dales. 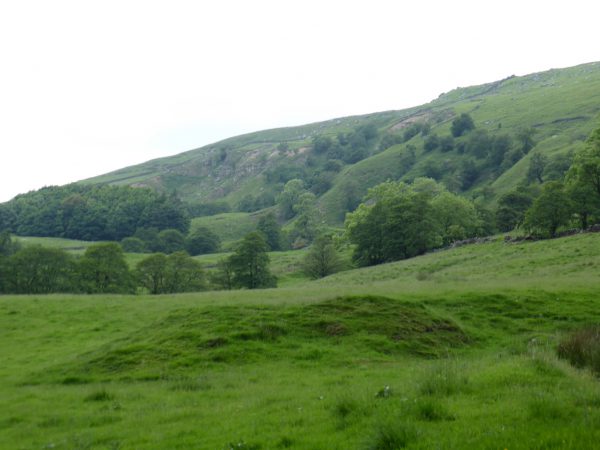 We soon cross the River Nidd, fortunately it is dry at the moment because I can see no obvious way of crossing if the water was flowing along the river bed. 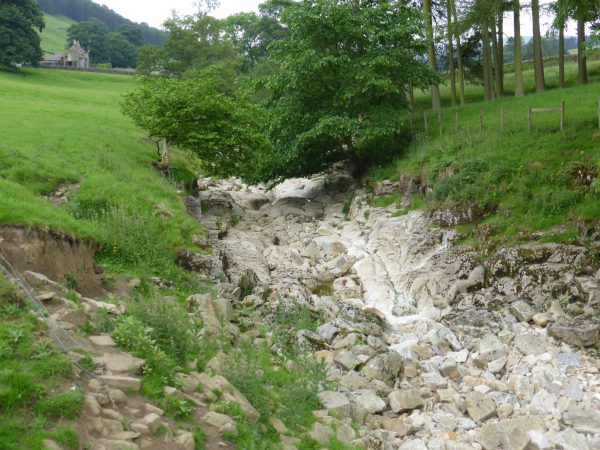 After a couple of miles on the Nidderdale Way we leave the route at Bracken Ridge by following a footpath that climbs steeply along a farm track to reach a crossroads of paths at Dale Edge, here we turn left and walk along a broad track  crossing the edge of Masham Moor.  In the distance we can see the dam of Scar House Reservoir. 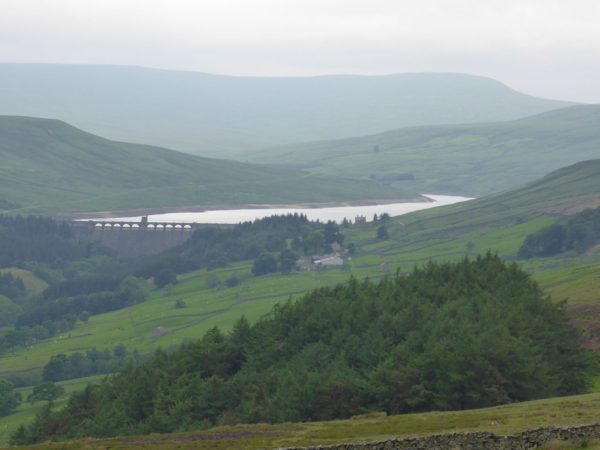 After passing an old mine shaft we follow a downhill track to rejoin the Nidderdale Way and  descend to cross the reservoir dam. 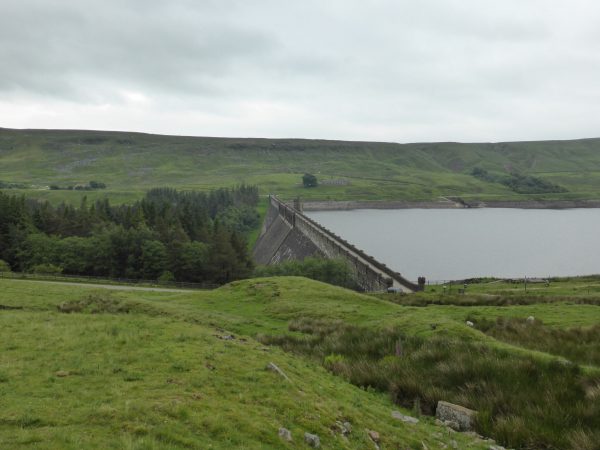 On the far side of the dam plaques on either side of the road commemorate the construction of the reservoir by Bradford Corporation.  The one on the left states that the first sod was cut on the 5th October 1921 by the Lord Mayor, one Lieutenant Colonel Anthony Gadie.   The four key stones were set on the overflow sill on 24th September 1930 by four Aldermen who along with the members of the Water Committee are also listed.  Whilst the plaque on the right states that construction of the reservoir was completed by (the now) Sir Anthony Gadie and lists the members of the Water Committee on completion.  So it might appear that Gadie built the whole thing by himself and was knighted for his efforts.  However, in reality a workforce of 1,200 men toiled on the site, but their efforts do not warrant a mention.

Some Internet research reveals that the workmen were paid 1s ½d an hour, which equates to 5p, and they worked from 7.30am until dusk with half an hour for lunch.  One unfortunate chap lost his life on the construction site, but obviously even he was not deemed important enough to get a mention on the Bradford Corporation plaque. 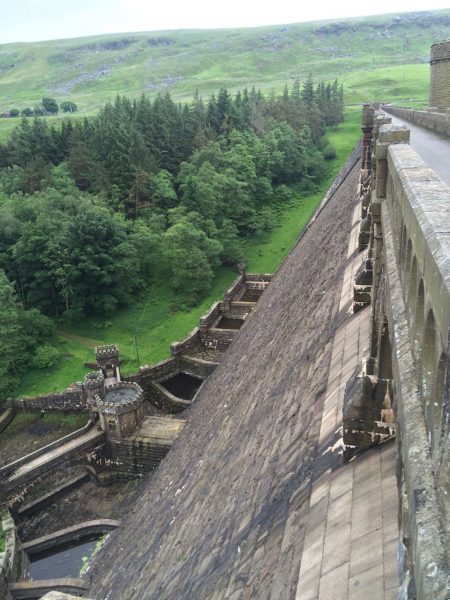 The reservoir, built to supply the population and mills of Bradford, has a surface area of 172 acres and holds 2,200 million gallons of water, of which 21 million gallons is supplied each day to Bradford. 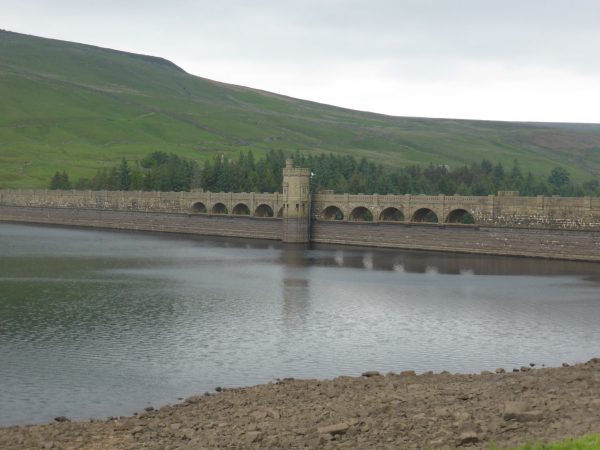 From here we continue on the Nidderdale Way as it climbs steeply through a rocky outcrop to reach the top of In Moor. 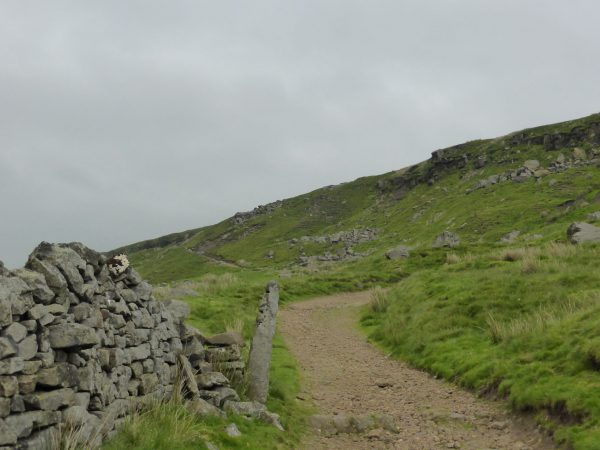 From here the route is very straightforward following the stony track (In Moor Lane) as it crosses the moor and reaches Middlesmoor close to the car park.

Our wander around Nidderdale has clocked up over ten miles and has been a cracking outing.  Lynnie feels that after yesterday’s excursions it was a tad too far.  I will need to plan something a little less strenuous tomorrow!  It is not the distance that bothers Lynnie but she dislikes steep climbs in hot weather.

We contemplate a pint in Middlesmoor, but opt to get back to West Lees Farm CL and have a drink whilst enjoying the view. 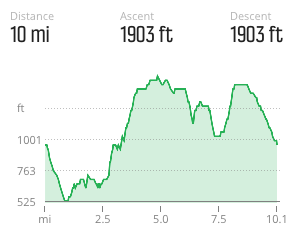