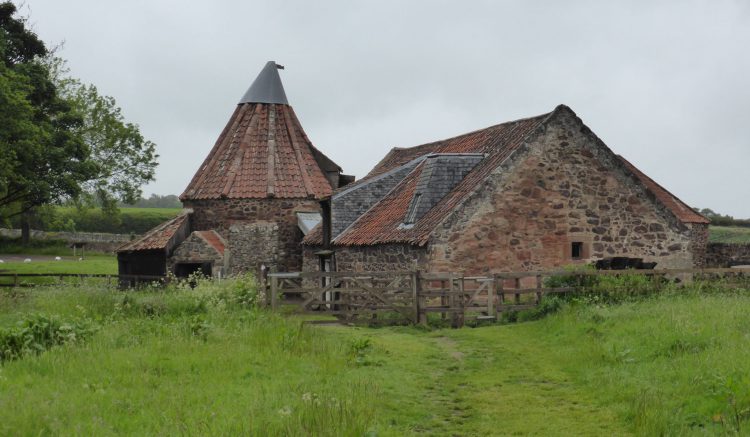 Travelling with dogs usually makes it difficult for us both to visit National Trust properties.  Unless it is very cool we will not leave the dogs unattended in the car and as much of our travelling is during the warmer months this means that I usually go for a walk whilst Lynnie tours the buildings.

However, today is an exception, the weather is decidedly damp and cool and the car park is only fifty yards from the building we are visiting.  We are off to look at Preston Mill on the outskirts of East Linton just a few miles from our pitch at East Fortune Farm CL. 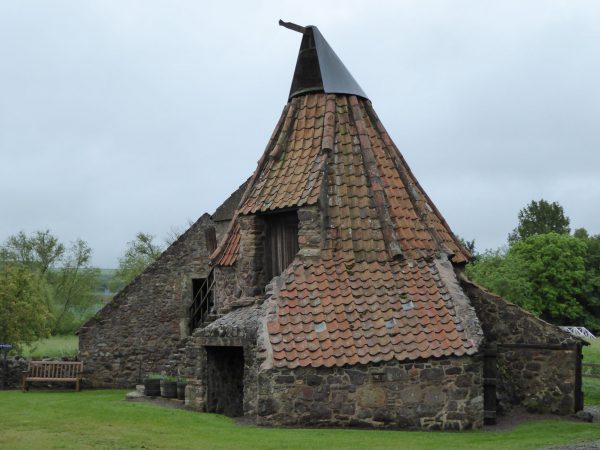 We are warmly greeted by the guides on arrival and asked if we mind waiting a few minutes to see if anyone else arrives wanting a tour.  In the meantime we are invited to look at an interesting display explaining some of the history and workings of the mill.

Lynnie and I agree on most things, but when visiting buildings and museums we have totally different interests and approaches.  Lynnie likes to read every word on the information boards whilst I focus on the building and machinery.  When it comes to artworks Lynnie spends ages (or so it seems to me!) studying them whilst I am more likely admiring the plasterwork or a piece of furniture.

Like most things in life there are advantages and disadvantages to our differing ways.  An obvious disadvantage is that I can tour an exhibition in an hour, whereas Lynnie would like to spend three.  But on the counter side I don’t need to read anything because I know that if I ask a question Lynnie will know the answer!

However, when it comes to agricultural issues, like the exhibition at Preston Mill I am totally absorbed, so today we both diligently read every word.  Just as we finish looking at the display another couple arrive and the tour starts.  It is absolutely fascinating.

Preston Mill is driven by water diverted from the River Tyne and there has been a mill on this site since the 16th century. The current mill originates from the 18th Century and was fully working until 1959.

I am interested to hear about the Dutch tiles on the roof of the conical kiln, these tiles are a common feature on many homes around this area.  In the 1600’s colliery ships carried coal from the ports around the Fife Estuary to Holland, they needed ballast to ensure a safe return trip.  Initially they carried crushed stone that was dumped as they neared port but then someone came up with the bright idea of using roof tiles to provide the ballast. 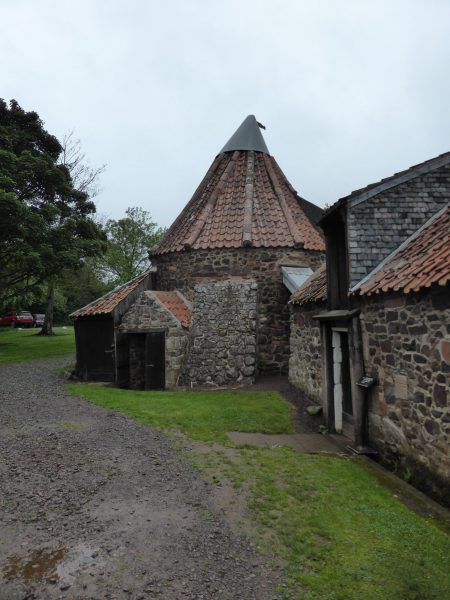 The detail of the tour is riveting, we hear about the milling process and the miller’s way of life.  Our guide, who has only recently started here, adds detail to every aspect and is ready to answer all of our questions.  It would be a shame to come to the area and not pay a visit.

We rarely watch television so have not heard of a programme called Outlander, but apparently Preston Mill was used in scenes.

Following the mill tour we are shown markings on the wall indicating the level that floods have reached in the past, given the distance from the river and the breadth of the valley it is quite amazing.  We then look at the water wheel, which of course is the bit that drives the machinery. 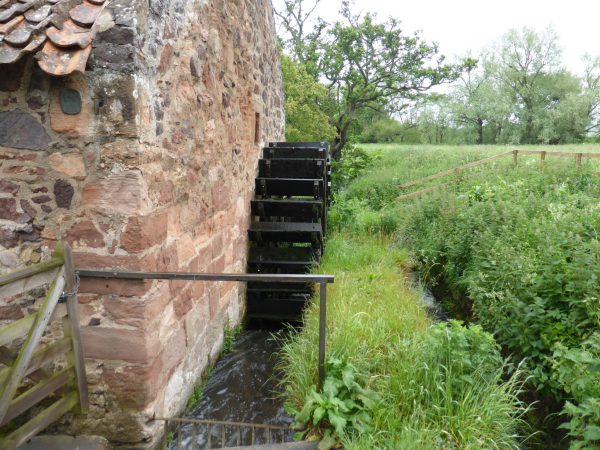 After our tour we collect the dogs from the car and walk past the Mill to cross the River Tyne and take the short walk to the Phantassie Doocot (or dovecote if you come from England).  This Doocot is a substantial building constructed in the 16th century to house 500 pigeons. 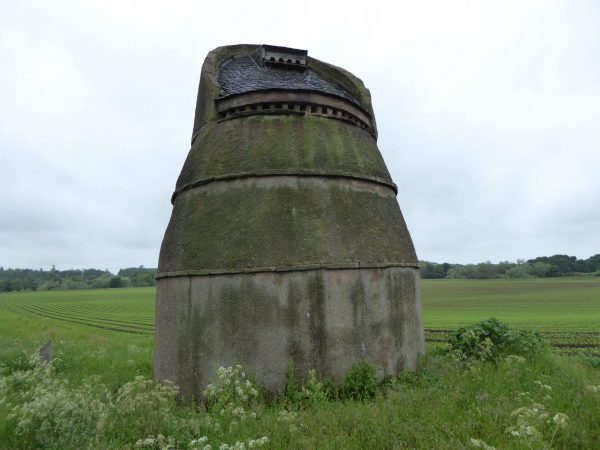 To be honest I had not previously appreciated the historic importance of Dovecotes.  They were generally built by powerful landowners and were multifunctional.  Inhabited by pigeons they provided a year round supply of fresh meat and eggs.  The droppings that built up on the floor were used as fertiliser and in the production of gunpowder, as well as being utilised for leather tanning and dying clothes. 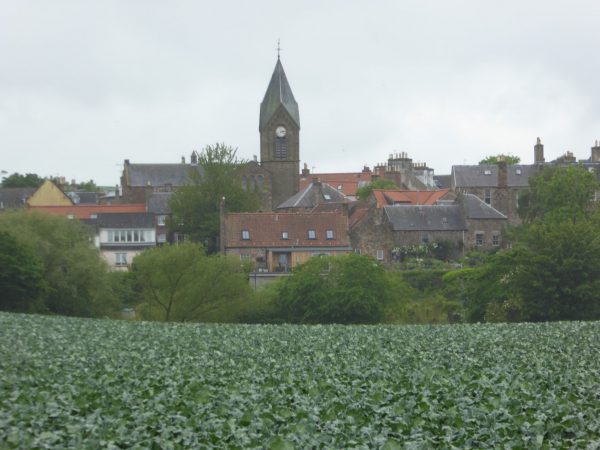 After popping into East Linton to visit Linton Butchers, I can strongly recommend the pies; we head back to East Fortune CL and after a bite to eat are off to North Berwick where I pause at a barbers for a haircut.  I have previously blogged about haircuts, and would not usually bother to share such detail, however, this has to be the quickest haircut I have ever had.  I know my hair-line is receding (curtesy of regular comments from Lynnie) and, as a consequence it might not take as long as it used to.  But this is ridiculous, I don’t have time to warm the seat before I am out of the door, it was not as if they were busy, there was no one else waiting!

The boys have been very patient, but they are now ready for a walk and have got a sniff of the sea air.  So we head once again to Yellow Craig Plantation and walk along Broad Sands towards North Berwick.

After so many misty days it is suddenly much clearer and we get great views of Fidra. 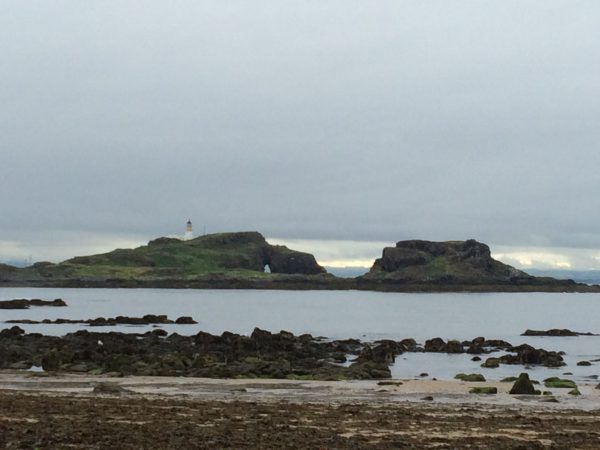 Further along we can see Bass Rock. 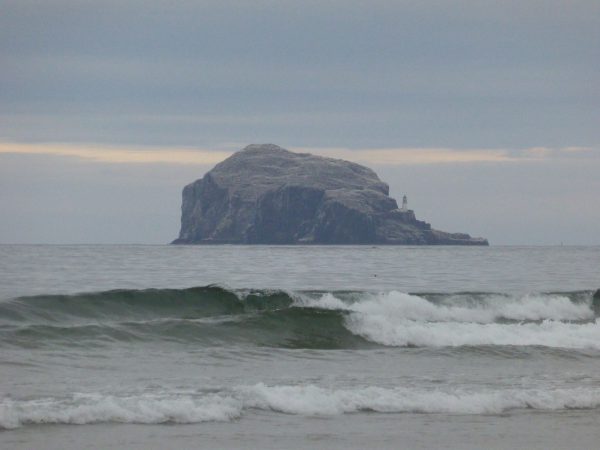 Inland the top of North Berwick Law is visible for the first time in a week. 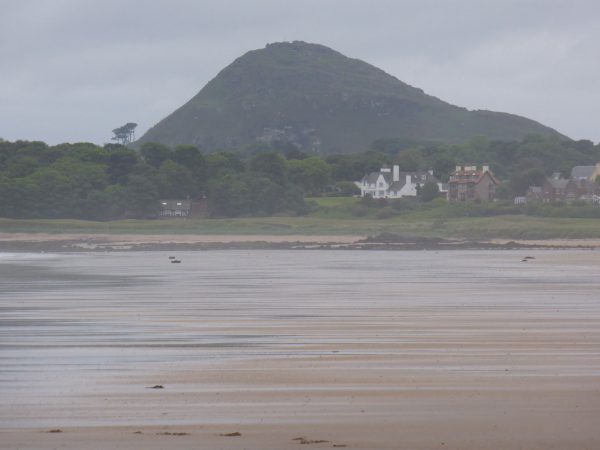 We are on the move tomorrow, heading south to Ripon.  We are looking forward to walking in the Yorkshire Dales again.  We will all miss this part of Scotland, especially the dogs; they have become accustomed to having the huge expanses of sand to themselves.

One thing for sure, we will be returning to this area before too long.