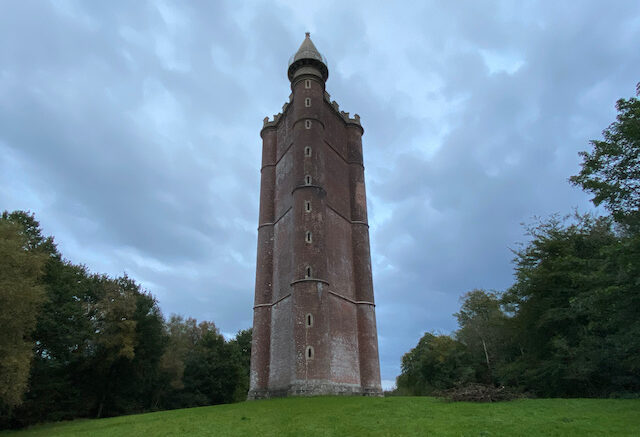 Prior to setting off on this trip I did a bit of research about interesting places in the locality and came across a striking image of Alfred’s Tower on the Stourhead Estate.  We have previously visited Stourhead to view the magnificent autumnal display of trees, but we have not explored the surrounding woodland or visited Alfred’s Tower.

So today we are going to start our walk from the Tower, parking in the National Trust car park (Grid Ref: ST748352).  Leaving the car park we cross the road and take a path heading south.  This soon reaches a clearing with King Alfred’s Tower a few hundred yards away.

We decide to postpone visiting the Tower for now as we will pass closer by it on our return to the car.  The footpath we are on follows a track heading south through the trees of the Stourhead Estate.

There are number of other tracks leading off the track we are on but we stay with the footpath to reach a crossing of paths at a junction with the Macmillan Way.  Here we go straight across and now follow the Macmillan Way to join a tarmac track which then reaches a road fork at Pen Hill.  We take the left fork and continue on this minor road through the trees.  We walked this road a few days ago in the opposite direction, today we head steadily downhill to pass Gasper Farm.

Staying with the lane we continue downhill to reach the dam across New Lake.  This is a cracking spot.

Back on 28th June 1917 after a spell of prolonged continuous heavy rain the earth and clay dam collapsed and thousands of gallons of water washed down the River Stour to flood the Bourton Foundry a few miles further down river.  The dam was rebuilt in 1920.

Continuing along the road to a junction we turn left and pass a telephone kiosk.  Staying with the road we pass a cracking farm with walled gardens.

Just before reaching the Stourton sign and an arch over the road we turn left to make a short diversion down to visit the Lower Pump House.  An information board explains it was built besides an existing water trough in 1897.  Its purpose was to pump water to the mansion house farms and cottages.

In 1906 the pump was updated and it then pumped water to a reservoir created near Alfred’s Tower.  The reason for this was a devastating fire in the main house in 1902 when it was decided a reserve supply of water was required to prevent further tragedy.

In 1921 a new waterwheel was installed below which increased  the water supply to the reservoir and provided the whole estate with water until mains water arrived in the 1960’s.

Returning to the road we turn left and pass under the stone arch into Stourton.

Soon on our left is the Bristol High Cross.  This is an interesting monument, with a fascinating history.  Built in 1373 as a market cross it was located in the centre of Bristol to commemorate Edward III granting a charter that recognised Bristol as a county, separate to Gloucestershire and Somerset.

We also get an iconic views of Stourhead with it’s Palladian Bridge built in 1762.  Beyond it is a The Pantheon built in 1753/54, it houses a fine collection of marble statues.

To our right is St Peter’s Church.  It is believed a church stood on this ground as far back as 1291.  In 1717 Henry Hoare purchased the Stourhead Estate, he was the son of Sir Richard Hoare the founder of C.Hoare & Co. Bankers.  Apparently Henry and his father were commissioners for the building of 50 new churches in London and he started the renovation and rebuild of this church in 1722.

We continue up the road to pass the Spread Eagle Arms an 18th century Inn. On our visit to Stourhead a couple of years ago it was absolutely heaving, now with the Covid rules in place it is much quieter.

Staying with the road we reach the main gates to Stourhead with a cracking turnstile to their right.

Going through the arch we follow the driveway towards Stourhead House.  This is the start of the Stour Valley Way a 64 miles long distance trail from Stourhead to Christchurch.  The house was completed in 1725 and took four years to build.  We visited it a few years ago and spent time looking around the collection of art, antiquities and other fascinating artifacts.

The last Hoare to live here was Henry Hugh Arthur Hoare; he gave the house to the National Trust in 1946.  His only heir was Captain “Harry” Henry Colt Arthur Hoare, who died in November 1917 from wounds he received in the First World War during the Battle of Muhar Ridge, part of the South Palestine Offensive.  On our last visit there were lots of other visitors, but today the pandemic restrictions mean the house is closed to the public.

Just after passing the house we take a footpath on the left, still on the Stour Valley Way, and cross fields towards the Obelisk that was built in 1839 in memory of Henry Hoare.  This obelisk replaced an earlier version built in 1746.

The path descends steadily through trees to reach a field which we cross and pass by a pond.

Now we head uphill through the trees to reach a crossing of tracks.  Here we continue straight on leaving the Stour Valley Way to head west through a pasture field.

We soon re-enter woodland and continue heading west.  There are lots of tracks leading off, but we stay with the route of the footpath to reach a crossing of paths where we go straight on along the route of the Macmillan Way as it heads north west through the trees.

The path undulates but continues to gain height.  Nearing a minor road after Hillcombe Hanging we turn right on a forestry track leading uphill and then as the path levels we take a path on the left leading to the clearing in which stands the impressive King Alfred’s Tower.

This tower was built for Henry Hoare who first conceived the idea in 1762 to commemorate the end of the seven year war with France.  However, the construction was not completed until 1772.  It is an impressive structure and stands at 131 feet tall and 167 feet round.

At the top is a viewing platform accessed by a 205 step spiral staircase.  In normal times there are days of the year when the tower is open to the public.  I have no head for heights, so even if it was open I would not be tempted to make the climb to the top.

In 1944 a US Army plane heading to the nearby RAF Zeals airfield crashed into the top of the tower which resulted in the death of the five crew members.  Further restoration work was carried out in 1986, this included repairs to the statue of King Alfred.

From the Tower we continue across the clearing to join the path where we started our walk, turning left to return to the car park.  Our wander has covered just over seven and a half miles and has been a cracking walk.

You can view this 7.7 mile walk on OS Maps and download the GPX File Here (Subscription to OS Maps Required)