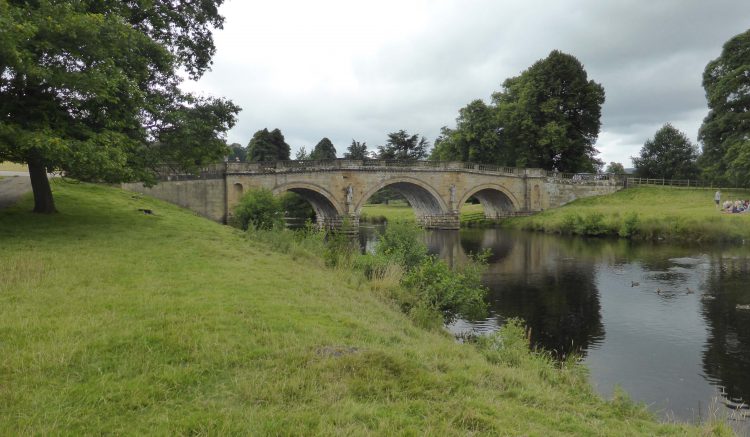 As previously mentioned Lynnie and I have visited the Peak District in the past and done a number of walks from our walking books of the area. The problem is we can’t recall which ones so we are undecided if we have done a walk from Bakewell or not. Lynnie says we have but I am not so sure.

There is only one way to find out, so we drive to Bakewell and park in the town alongside the show ground, it is being prepared for the forthcoming Bakewell show. This bit is familiar, but I know we have visited Bakewell in the past.

We walk into the town and cross the River Wye over a modern bridge with an odd feature. On the railings numerous padlocks have been affixed, some have messages of undying love, others are in memory of those no longer with us and a few just blank. Rather odd and something that we have not encountered elsewhere. 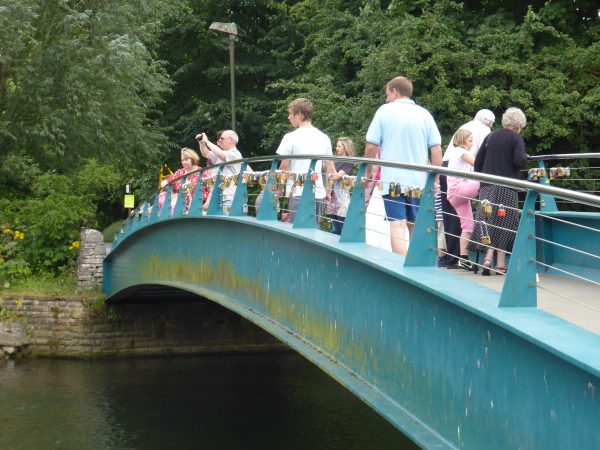 We leave Bakewell crossing the medieval bridge and turn right to walk along the old coach route. We leave the track at the start, or end, of the Monsal Trail this is by a railway bridge and we turn right along a bridleway and soon enter a field on our right and walk above the River Wye.

After a while we join a tarmac lane and start to climb. Soon we come to the entrance of the tunnel that the Duke of Rutland insisted on being built so that he could not see the railway line from Haddon Hall (see yesterday’s blog for more details).

Shortly after the tunnel there is a bridleway on the right and we leave the track to join it. This takes us alongside railings that we follow until we reach Bowling Green Farm. The farmhouse was originally the pavilion for the bowling green where the Duke of Rutland entertained his friends. Unfortunately we are unable to see much of the farmhouse or the bowling green. We follow the path alongside a wall, it soon becomes a track with views back across Bakewell.

At a junction of paths we take the one opposite. The track we have just crossed used to be the main turnpike in the days of packhorses. Bakewell must have been a welcome sight after many hours on the road.

We go up hill through woodland. It is steep but not so steep that Lynnie requires a breather. Our walking book tells us that at the top we enter a newly planted plantation of conifers. These trees are now well established, I am not saying that our book is old but it did include a warning about the risk of highwaymen on the old turnpike road!

As we emerge from the woods we see Russian Cottage across the valley. This is a Russian style house built by the Duke of Devonshire to signify his friendship with the Tsar. Apparently in 1855 the Tsar gave the 6th Duke of Devonshire a model of a Russian Farm, so the Duke built the full size cottage. A pretty obvious thing to do really! 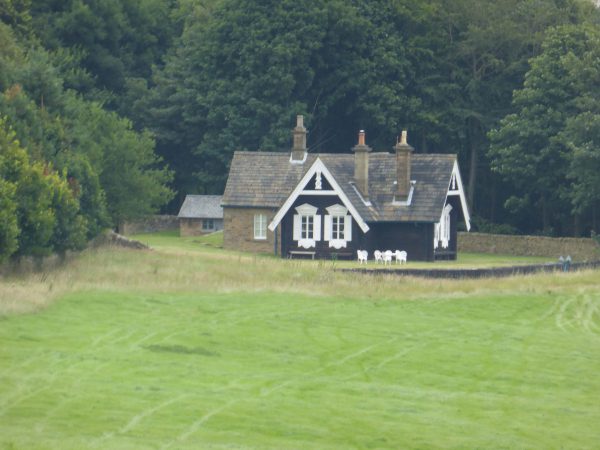 We cross Carlton Pasture and then pass through a copse before crossing another field. It is then a short walk through New Piece Wood before arriving at a high gate on the edge of the Chatsworth Estate deer park.

Once through the gate it’s time for a picnic. We can hear a commotion and speculate what it could be, then around either side of Maud’s Plantation comes a huge flock of bleats.

Refreshed we take the bridleway towards the River Derwent and walk in front of Chatsworth House, this is a very impressive building. A number of years ago we did a tour of the house and gardens, today we just view from a distance. At the bridge just past the house we turn away from the river and walk to the village of Edensor. 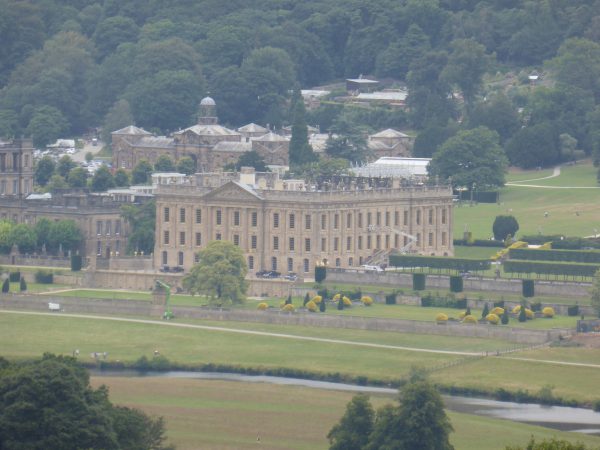 It is an interesting village. At first glance it looks very old with a mixture of architectural styles. The village was originally located close to the River Derwent immediately in front of Chatsworth House. Unfortunately for the villagers the 6th Duke of Devonshire did not like looking at the village, so between 1838 and 1842 he had it moved over the hill and out of sight. This was the same Duke that built the Russian Cottage and would not allow the railway across his land.

We walk through the village and as the road climbs it becomes a track. Another old packhorse route, with a milestone dated 1709. I always find walking such routes rather spooky, thinking of all those who have walked the route over hundreds of years, in bygone days without the aid of an Ordnance Survey map.

We join a minor road for just over half a mile before descending down hill. I do recall being here before and going the wrong way. So we concentrate and sure enough pick the right route amongst the maze of tracks in this well walked copse. We emerge on the edge of the golf course and cross a fairway to continue downhill. Eventually we come to the old Bakewell Railway station and turn left to walk into town.

It is some time since Lynnie had an ice cream so when she sees an ice cream van in a car park she is off like a shot. She deserves one because she was correct and we had done today’s walk many years ago. This is no ordinary ice cream van it is Frederick’s ice cream from Chesterfield. An award winning ice cream, too much for Lynnie to resist. I think I am beginning to spoil the girl. 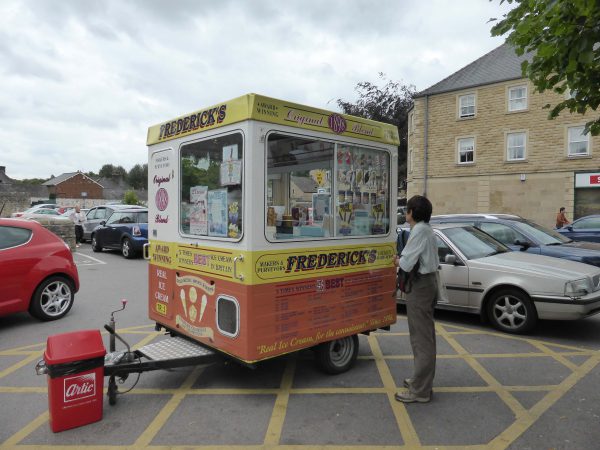 From Bakewell we head back to the Unicorn to feed the dogs before going to nearby Tideswell for a wander around and some fish and chips. We rarely eat fish and chips but we have read about a special shop in Tideswell where everything is cooked to order. Elliott’s is an exceptionally good fish and chip shop. It is the first time that I have ever been asked if I want the fish with skin on or off and then get shown the fillet before it is battered and fried. If you are ever in the area it is well worth a visit.