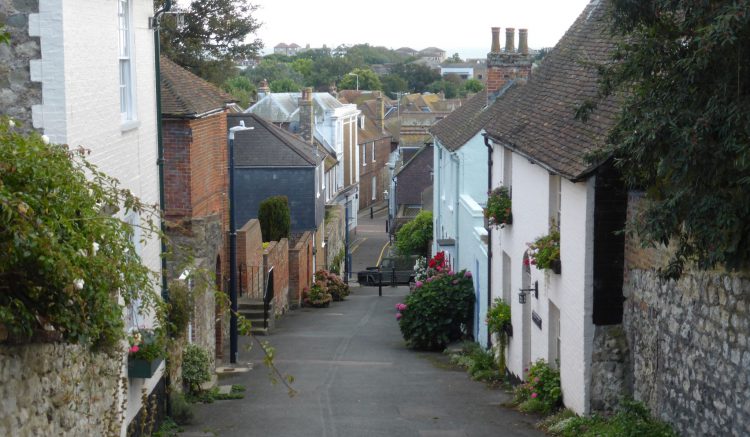 Having parked at Sandgate to walk to Folkestone a few days ago we decide to head there again and walk in the opposite direction towards Hythe. We have driven through the town on a couple of occasions but the road does not go through the old part of the town and we are keen to explore a bit.

On leaving the car we head west along the promenade towards Hythe, soon passing a memorial stone to Don Thompson (1943 – 2006) the race walker. Originally a runner Thompson converted to walking after an injury to his Achilles tendon. He won the London to Brighton walk, covering fifty-two and a half miles, on eight consecutive occasions from 1955 to 1962. He also won a gold medal at the 1960 Olympics in the 50km walk. The plaque states he was Great Britain’s only gold medalist at that Olympics, I am not sure this is correct because Anita Lonsbrough also won a gold medal in 1960 in the 200m breaststroke. However, this does not lessen Thompson’s remarkable achievement.

Following along the promenade we arrive at the Hotel Imperial, originally built in the 1880’s it has recently had a major £12m refurbishment funded in part by building 75 houses and flats in the 50-acre gardens. Apparently the plans were controversial and generated much local opposition.

At the end of the promenade the small fishing fleet is moored up on the beach with two Martello Towers close by. The sheer number of these Napoleonic towers, built to protect this stretch of coastline from a French invasion, is amazing. 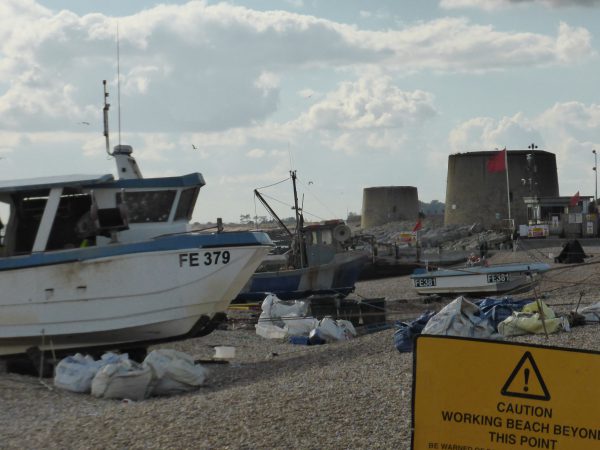 From the end of the promenade we turn to walk into Hythe. Lynnie’s father, Tim, lived here before World War II and whilst we do not know where he lived or worked it will be interesting to visit the town to get a sense of what it may have been like in the early 1930’s. Lynnie knows that Tim ran a small hotel/pub with a friend, so we stop to look at a few as we wander around. 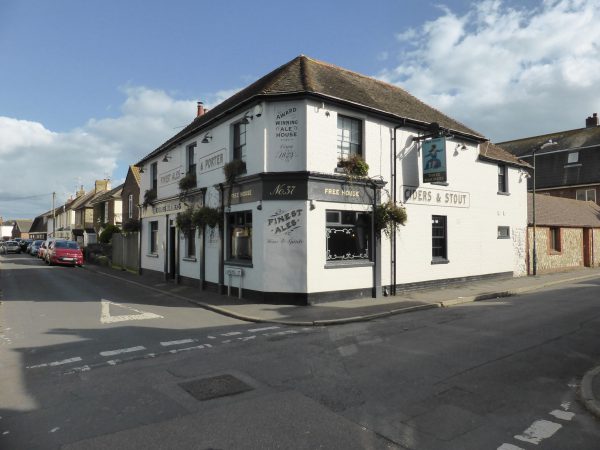 Whilst driving through Hythe a few days ago our attention was grabbed by an elaborate drinking fountain in a wall. Mayor Thomas Judge donated this fountain, in Red Lion Square, in 1886; it originally stood next to the Town Hall but was relocated here in 1911. It provided drinking water until 1965, but then public health concerns led to the supply being turned off. Apparently it was built by the Coalbrookdale Company from Shropshire and designed by William and Thomas Wills, it is stunningly presented. 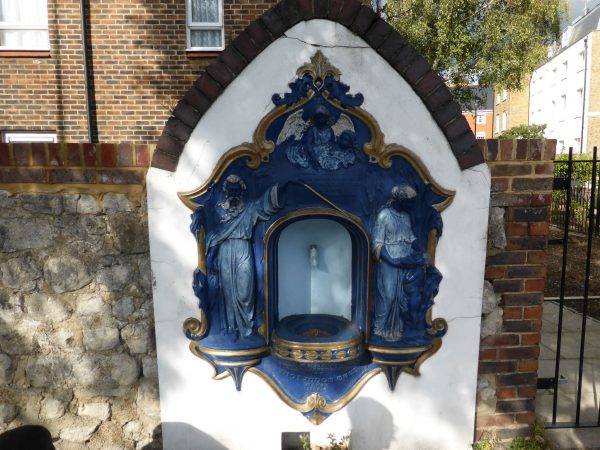 From here we wander down into the High Street, there are plenty of old pubs here, not knowing which one Tim ran we stop to look at all of them. It is an odd experience standing outside a pub and looking at it. Usually it only takes me a few seconds to decide if I am going to pop in; not a fan of daytime drinking having a sharpner is not on my mind today. 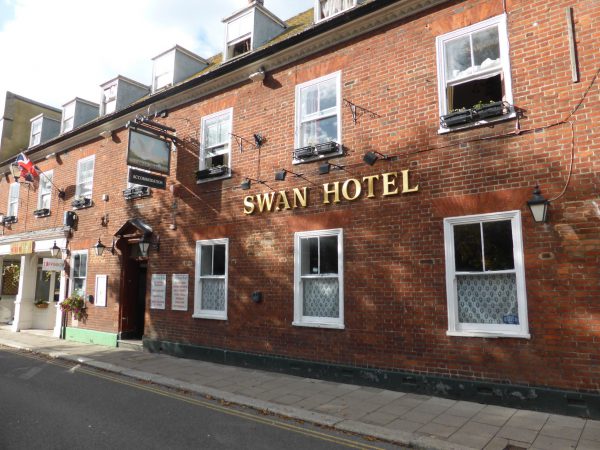 St Leonard’s church dominates Hythe, standing high on the hill overlooking the town. We follow paths up the steep incline to reach the church. I have read that there is an ossuary located in the crypt and it is one of only two in the country. I am not sure about visiting a collection of human remains. There are said to be 1,022 skulls and a stack of bones forming the remains of between 2,000 and 4,000 people. The first record of the collection dates back to 1679.

Lynnie lookpops inside the church whilst I sit outside with the dogs. I don’t think they would be welcome anywhere with such a collection of bones! It is a great place to sit and enjoy the sun and the view. Lynnie returns, apparently the ossuary is only open in the summer, which ended on 30 September. Why this might be is not explained, but I am sure there is a good reason. 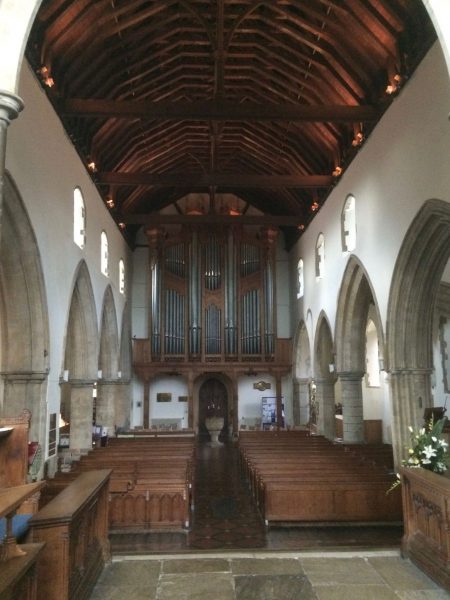 I take a turn to look inside the church and the organ immediately strikes me. It is splendid, with an interesting inscription. Arthur Harrison the renowned organ builder built it in 1936, apparently his next job was the organ at Westminster Cathedral, he died before that was completed.

What draws my attention is the names of the two local businessmen who donated the organ. Mr E Osbourne from Hythe Cabinet Works and Mr G L Mackeson owner of the local brewery that produced the stout that bears his name. I am partial to a drop of stout, usually favouring Guinness. It is years since I had a Mackeson, but I aim to rectify that soon.

Outside I tell Lynnie about the connection between the brewery and the organ. This leads to us trying to remember the slogan that accompanied adverts for Mackeson. It does not take us long to get it right “It looks good, tastes good and by golly it does you good”. Of course there is then the challenge of trying to remember who said those words.

This takes us much longer and occupies much of the remainder of our walk (and a good deal of time over the next few days!) it would be easy to look it up but we prefer to test our memories. We come up with a range of names including Arthur Mullard, Robin Bailey (who played Carter Brandon’s, Uncle Mort), and Ted Moult. In the end we admit defeat and succumb to the Internet to discover it was Bernard Miles. He also did the “Go to Work on an Egg” advert.

This gives you a bit of an insight as to how we occupy the many hours whilst travelling. Something we see or hear sparks a memory and leads to days of trying to recall something or someone connected to it!

From St Leonard’s Church we follow lanes back to Hythe High Street. There are some cracking old buildings here. It is an attractive little town.

Walking through the town we join the Royal Military Canal and walk a short section of this between the bridge at Twiss Road and Ladies Walk Bridge.   It is a very tranquil spot. 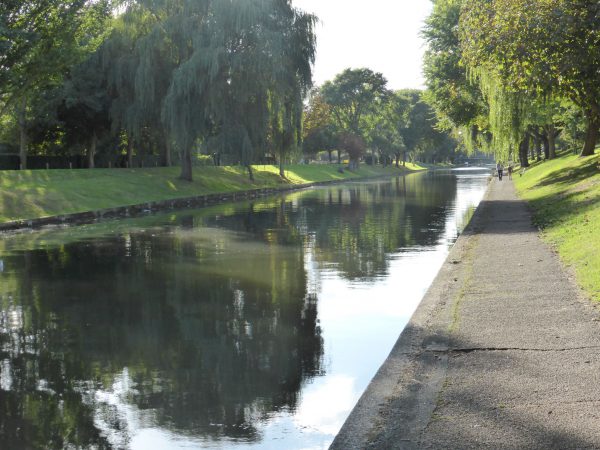 Further along there’s a memorial to the 700 navvies who constructed the canal. It must have been hard work; it was all done by hand without the aid of machinery. A good navvie could shift 3 cubic metres of earth in a day. 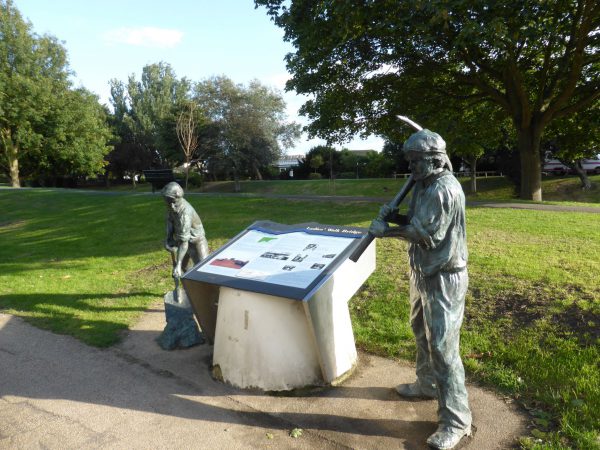 At Ladies Walk Bridge we cross the canal and follow ladies walk past playing fields as it heads south, on reaching a road we turn right and then left to walk down to the Marine Parade promenade.

Strolling along on a sunny afternoon I try to distract Lynnie from thinking about the actor in the Mackeson advert by tempting her with an ice cream. It works! 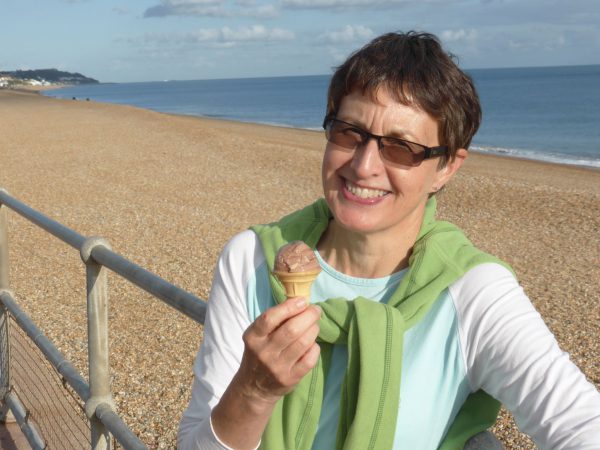 Lynnie enjoys her ice cream so much that she forgets to share any of it with the dogs. They are far from pleased, so a bit further along we stop at an ice cream van to buy one for them. They take it in turns to have a lick before eating the cornet it doesn’t last long! 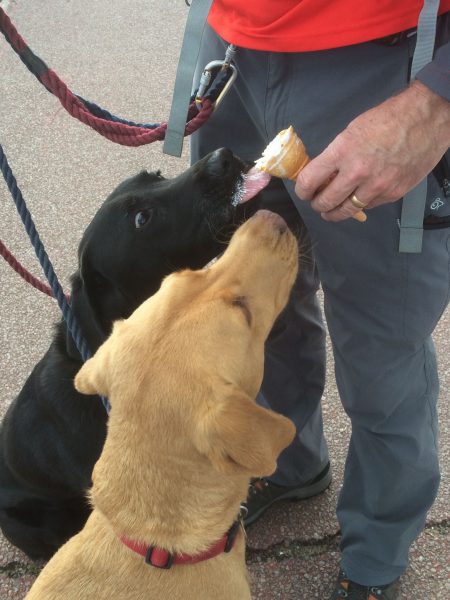 I think we may have started something, because at every food stall along the promenade they stop to sniff and see what delicacy might be on offer! 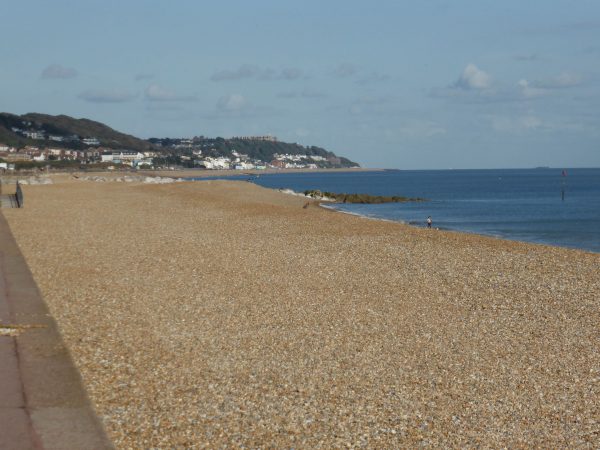 It is now just a pleasant stroll back along the promenade to our car at Sandgate, we’ve clocked up just over seven miles. Tomorrow we move on from Bellfield Farm CL. We have really enjoyed our stay, it is a great CL in a stunning setting and the owner Graham could not be more helpful. It will be added to our list of places to revisit at some time in the future.