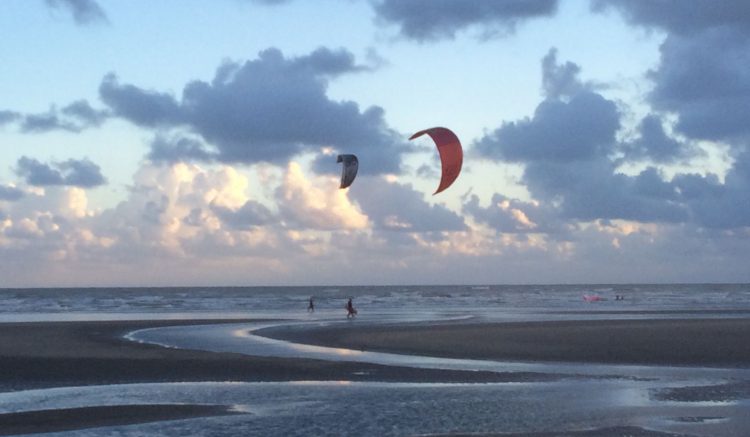 Our visit to Dungeness two days ago was curtailed by darkness so we vowed to return before leaving the area.  Our aim is to just wander about and get a feel for the unique atmosphere of this place.  We have certainly never visited anywhere else quite like this in the UK.

Our travels have taken us all over the Country and I would always plump for the Yorkshire Dales as being my favourite location, we have been fortunate to visit many stunning places but Dungeness is unique.  There is an almost alien feel to the landscape, at first glance it looks barren and then immediately it is beautiful.  In the Dales there is never any doubt of its beauty, but here the few seconds it takes to appreciate the splendour  adds to the experience.

We drive to Dungeness to maximise our time there and immediately take one of the walkways to the shingle bank.  The walkways have been laid to protect the rare habitat.  This is one of the largest expanses of shingle beach anywhere in Europe and is often described as England’s only desert or being akin to the Wild West. 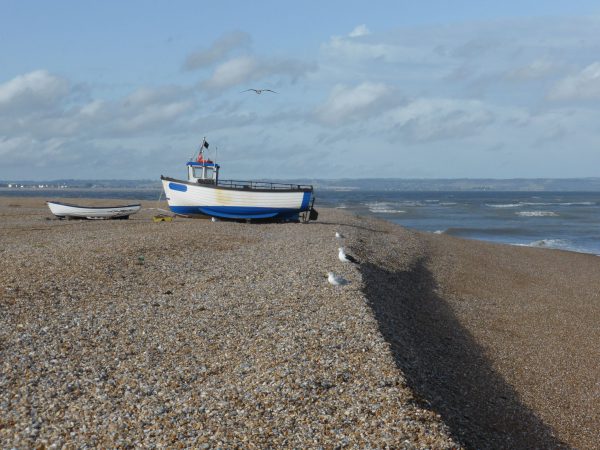 There is a long history of fishing from Dungeness.  There is no harbour for the fleet to moor in, the boats have to be dragged out of the water by bulldozers and then pushed back in for the next sailing. 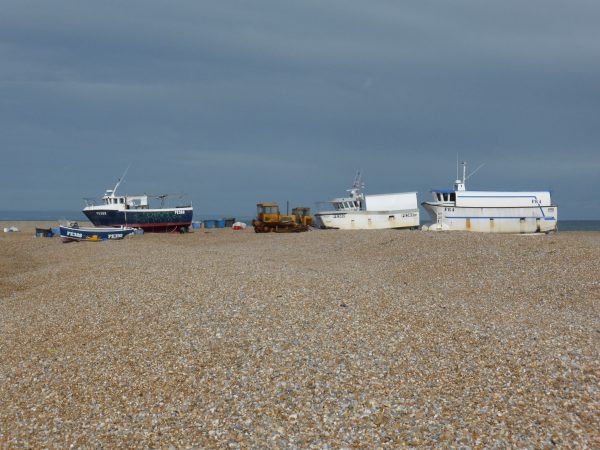 It makes for a fascinating landscape. Almost as if the boats have been abandoned. 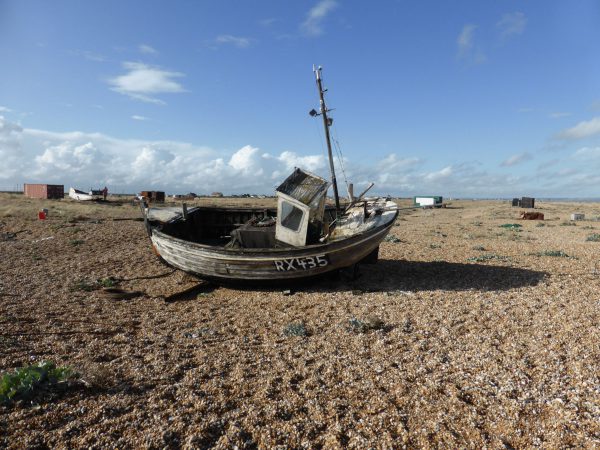 Further along there are boats dragged further inland; clearly these are not going back to sea.   I get the sense they have been left far enough from the waves to be safe, but close enough to smell the sea breeze and reflect on old times.  Almost like old cricketers sat in the pavilion hankering after involvement in the game, but recognising their day is gone and the pleasure is in remembering the past.

Of course, wherever you have fishing fleets and expanses of coastline you are soon going to encounter the RNLI.  On our travels we have seen many stunning old lifeboat houses, Dungeness does not have one of these.  What it does have is a stunning bit of kit to get the lifeboat from its house over the shingle beach and into the sea. 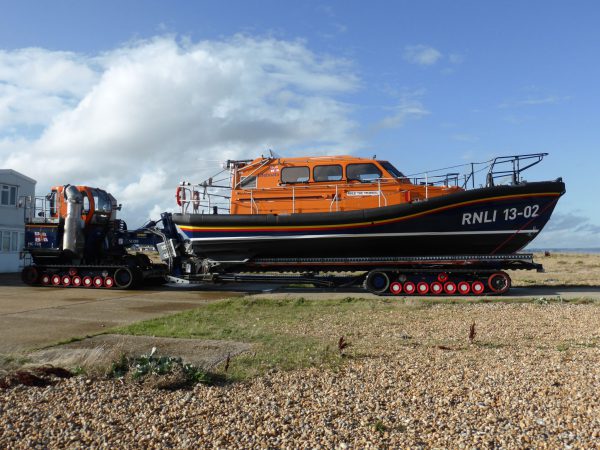 I am not usually fascinated by machinery, I love old farm machinery and historical industrial pieces, but things modern usually pass me by.  But this bit of kit is amazing.  The combination of the Shannon class lifeboat “The Morrell” and its tractor and trailer is something that we have not seen elsewhere.  The RNLI is, of course, a charity and this lifeboat, which has been in service since 2014 is a direct result of a £6m+ legacy from Barbara Morrell.

Barbara died in 2009 at the age of 95 and her family had a long association with the RNLI, she lived in Bromley in Kent and asked that her legacy should be used within the county.  A remarkable bit of philanthropy.

We have now strolled back to the road running through Dungeness.  Turning right and approaching the railway we see a sixties like building that looks out of place in these surroundings.  This was the Electricity Link Station, built in 1957.  Its purpose was to link the national grids of Britain and France and connect or disconnect the power as needed.   The line across the English Channel was laid on the sea bed and was prone to being caught by fishing nets, so in 1987 is was taken out of service and replaced by lines further east that run underground.  The Link House was converted to private accommodation in 2014. 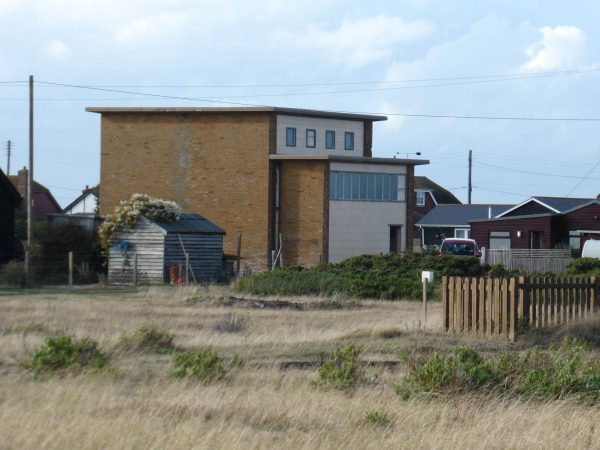 We have to stop to let the Romney, Hythe & Dymchurch light railway train pass.  The steam and diesel locomotives running on this line are one third of the size of normal trains and have been operating since 1927.  Originally conceived by two extremely wealthy miniature railway enthusiasts Captain J Howey and Count Louis Zborowski the line ran between Hythe and New Romney, but in 1928 was extended to Dungeness providing 13.5 miles of track.  Count Zborowski was a racing driver with a flamboyant and colourful character and was the inspiration for Ian Fleming’s book Chitty Chitty Bang Bang. Tragically Zborowski died in a crash at Monza during the Italian Grand Prix in 1924 and his friend and fellow racing driver Captain Howey completed the light rail project alone.

During World War II the line was requisitioned by the War Department, the Hythe to New Romney reopened for tourists in 1946 with the New Romney to Dungeness section opening in 1947, with no lesser figures than Stan Laurel and Oliver Hardy cutting the ribbon.  A few days ago when we walked across this line as darkness fell with well over an hours walk ahead of us.  Lynnie used one of their catchphrases “That’s another fine mess you’ve got me into”. At the time we didn’t know the Laurel and Hardy connection, now that’s what I call spooky! However, Lynnie would say it is a phrase she has cause to use frequently!

After crossing the railway line we wander up to the Watering House.  Apparently this late 19th century house was built to house the family that provided fresh water to passing ships. 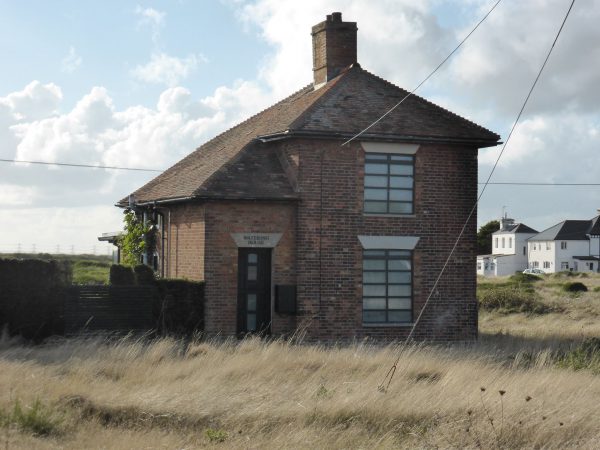 After a bit more looking around we turn and head back along the road towards our car.  There are many interesting properties, all looking like shacks but some have clearly received the full “grand design” makeover.  The property that Lynnie is keen to see is the house that Derek Jarman, (1942-1994) lived in.  Amongst his many talents Jarman was a film director, author and artist.  He moved to his home on Dungeness in the mid 1980’s and lived at Prospect Cottage until his death.  The garden he created is renowned for the way he used the shingle, plants, driftwood and flotsam. 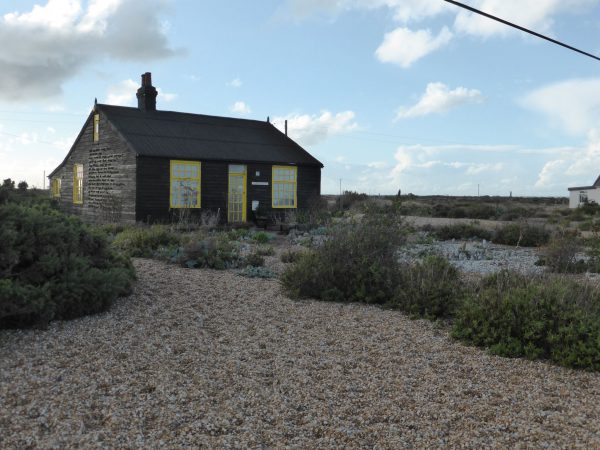 Back at the car we decide that despite it being a bit chilly we should explore further.  So far we have covered just over three miles, but the dogs are eager for more and particularly keen for a run on a sandy beach.

After a quick look at the map we make the short journey to Camber Sands.  A few weeks ago this stretch of beach was in the news because the incoming tide caught out a group of friends and sadly, five lost their lives. 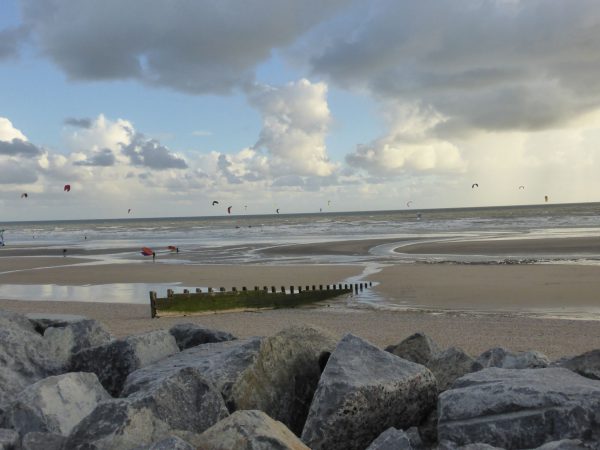 Today the beach is a hive of activity; I have never seen so many surf kites in any one place.  It is amazing to watch and I am surprised they don’t become  entangled with one another. 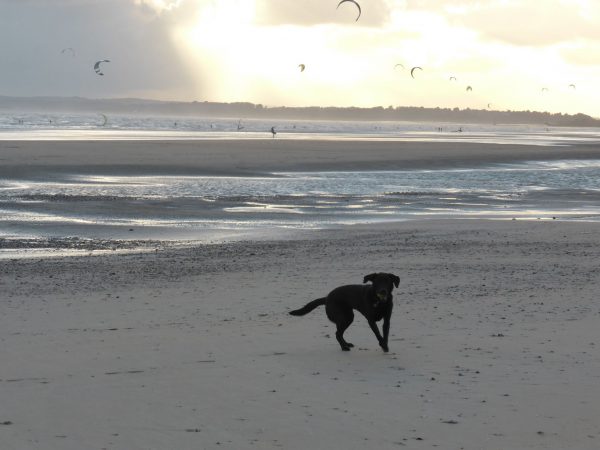 The dogs are anxious to get on the sand, they must have been studying the calendar and know that from today, the 1st October, they are allowed back on the beaches following a summertime ban.  They are more interested in chasing tennis balls than watching kite surfers and whilst I play with them Lynnie gets her camera out. 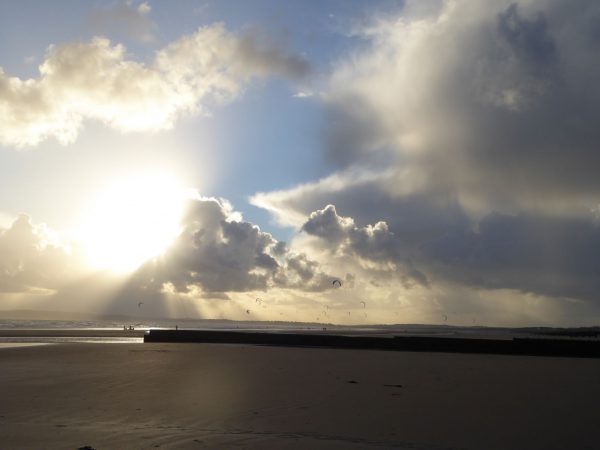 It has been a wonderful afternoon, we have just been ambling about, but as the sun sets we are all worn out from our exertions.  I know I keep saying it, but this really is a cracking part of the country. 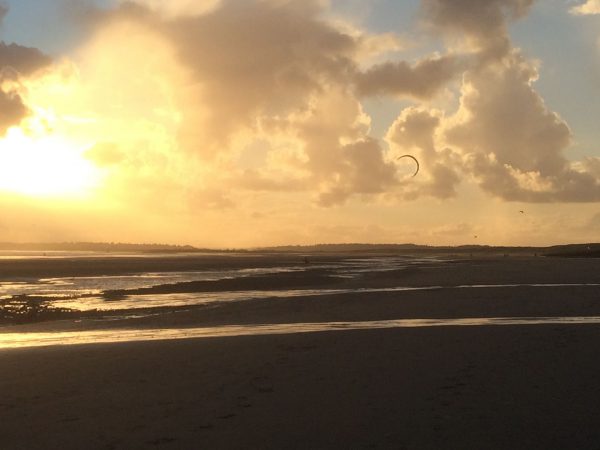