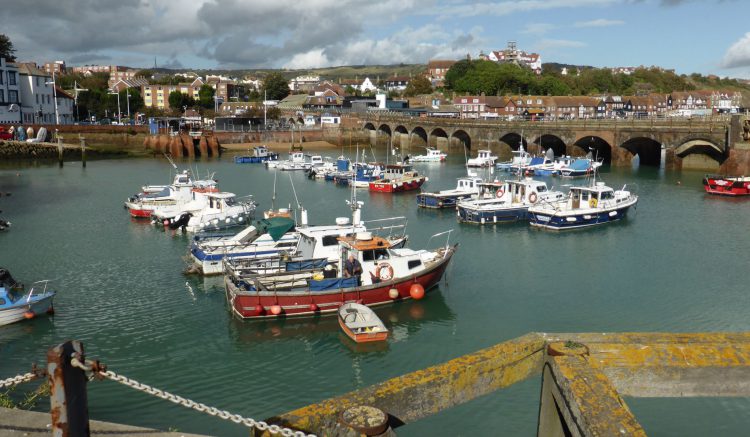 We are thoroughly enjoying our first tour of this part of the country. The weather has been excellent and each day brings another fascinating discovery. Earlier in the year whilst walking the Fife Coast Lynnie mentioned that since we started our travels back in 2014 we must have covered a considerable section of coastline and came up with the idea of getting a big map and colouring in the parts we have walked. That sounds like a project for the dark winter months.

My fear of heights makes me wary of coastal paths, however the coast here is relatively cliff free. The start point for today’s walk is close to Sandgate, lying between Hythe and Folkestone, we park on the coast road about half a mile west of Sandgate and head east along the promenade.

Reaching Sandgate we come to a monument to Lieutenant-General Sir John Moore KB (1761-1809). Not a name I am familiar with, the adjacent information board tells how he is considered the father of the British Light Infantry and that his methods of soldiering became the foundation of today’s British Army. According to no lesser man than the Duke of Wellington, Moore was “The finest trainer of men England ever saw”. Napoleon Bonaparte said, “It was only Moore’s action which stopped me taking Spain and Portugal”. I am sure military enthusiasts will have heard of him, but it is odd that compared to the likes of Nelson and Wellington this man is hardly recognised. 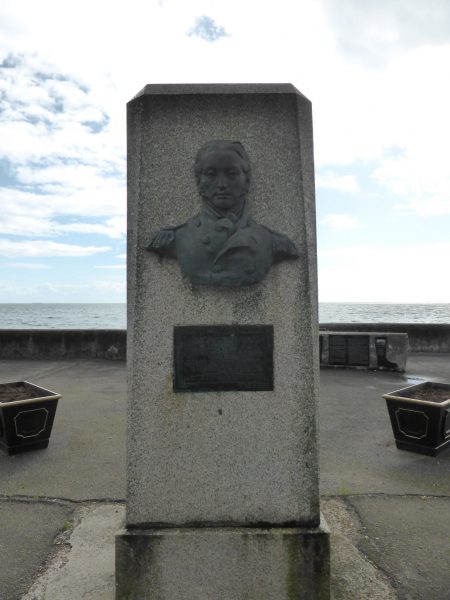 We are walking between seafront houses and the beach and soon arrive at Sandgate Castle; an old artillery fort originally constructed around 1540 by Henry VIII. During the Napoleonic Wars it was reduced in height and the keep turned into a Martello Tower. In 1888 it was sold to a railway company but sea erosion led to parts falling down and it was sold for conversion into a private residence in the 1970’s. 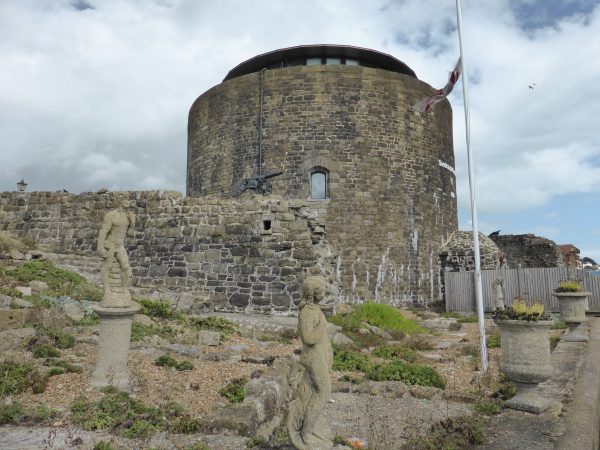 Next up is a row of wonderfully colourful beach huts. 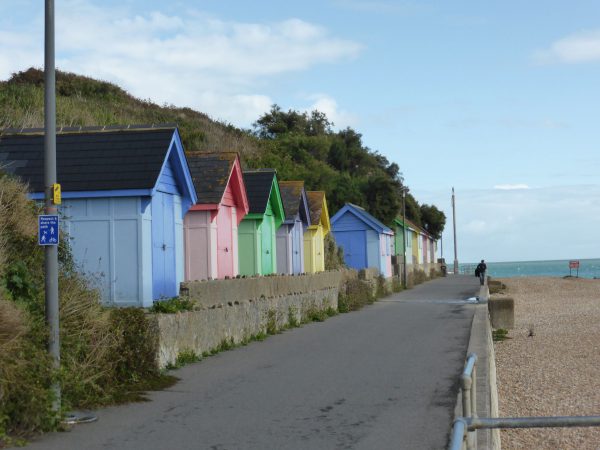 In amongst them is a bizarre looking hut that is part of the local art trail. I have never seen a beach hut anything like this! 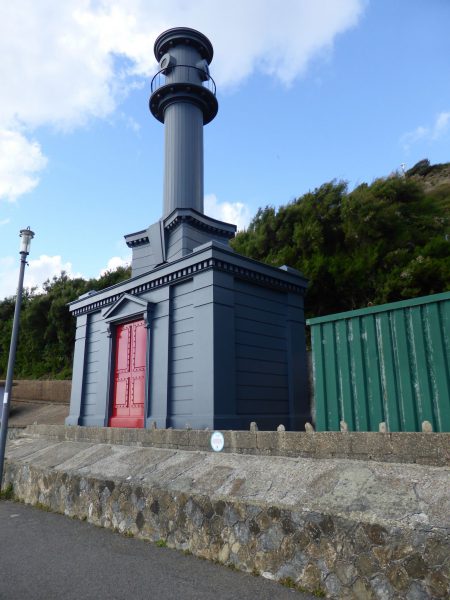 Further along is a row of more traditionally shaped huts decorated like a crazy golf course, these are also on the art trail, it is good to see people having fun and creating the unexpected. 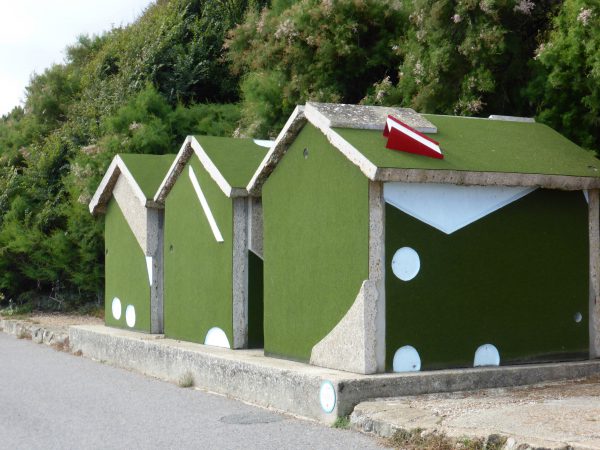 Shortly we arrive in the outskirts of Folkestone, immediately we get a sense of its glorious past. Here is Leas Lift, a funicular railway operating between the seafront and the Leas promenade above. It first opened in 1885; the lift operates using water and gravity, emits no pollution and recycles all the water it uses. What a wonderful machine! In 2009 the Shepway District Council’s lease expired and it was deemed too expensive to run. After a local campaign the not-for profit Folkstone Leas Lift Community Interest Company was formed and they now run it. I am a strong advocate for communities running local facilities and it is refreshing to see them protecting such a historic lift. 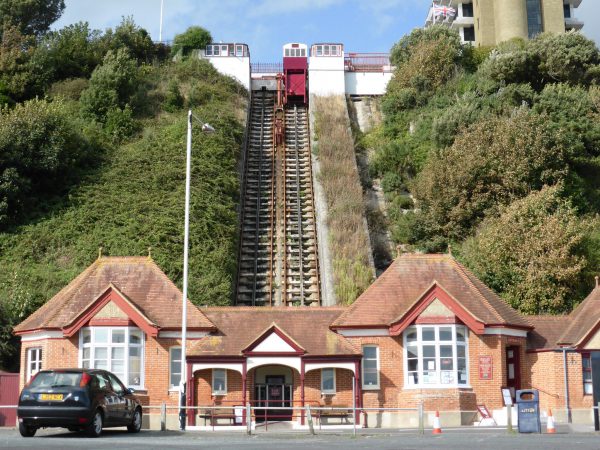 Next to the lift is a once grand crescent, no longer looking at its best or such desirable residences as in their heyday; it is still a very impressive building. 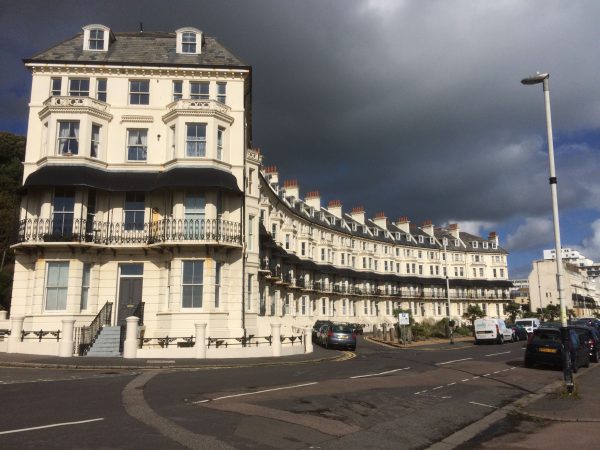 Around the corner we reach Folkestone Harbour. I was not expecting this, it is stunning. In 1809 Thomas Telford built the stone harbour and pier and in the following years the town grew up around the harbour. Unfortunately, silt from the Pent Stream meant that constant dredging was required resulting in the bankruptcy of the Folkstone Harbour Company in 1842. 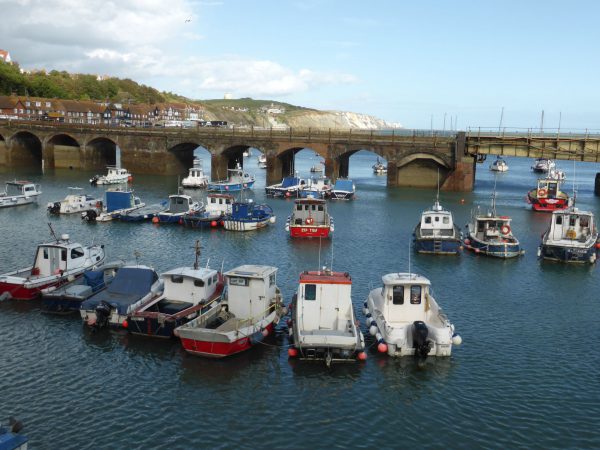 The South Eastern Railway Company purchased the site and in 1844 built the horn pier, which became the company’s main port for continental traffic across the Channel to Boulogne. In 1849 49,000 passengers used the service.

In 1860 a quay was built to house a fish market. Along the horn pier there are now a number of pop-up restaurants serving a wide variety of foods. There is development work going on, but I am sure that by next summer it will be a hive of activity.

Of course the harbour, and the now derelict train station on the pier are not unaccustomed to masses of people. During World War I this was a major embarkation point for British Troops heading to France, unfortunately for too many it was a one-way journey. At that time the harbour also saw 120,000 war refugees pass through it. Nowadays war refugees are once again common in this area, I would like to think they are afforded the same level of hospitality as their unfortunate predecessors, but somehow I doubt it.

During World War II it was again used as a major port with 44,000 troops arriving here during the Dunkirk Evacuation.

After the War the port grew as a transport link enhanced by the introduction of the roll-on/roll-off service in 1971. The following year 1,266,783 passengers, 913,160 cars, 5,663 commercial vehicles and 31,594 freight vehicles used the port. This all stopped in 2001 when ferry services ceased.

The redevelopment plans include the establishment of a “Leaving for War Museum”, let’s hope that the human suffering of those involved are permanently recorded for future generations.

At the end of the harbour pier the 1903 lighthouse has recently been refurbished. It appears to double as a champagne bar whilst still operating as a lighthouse. I am taken by the text on the outside of the building “Weather is a third to place and time”. We are fortunate that today the weather is good, but this would still be a stunning place on a wet day. 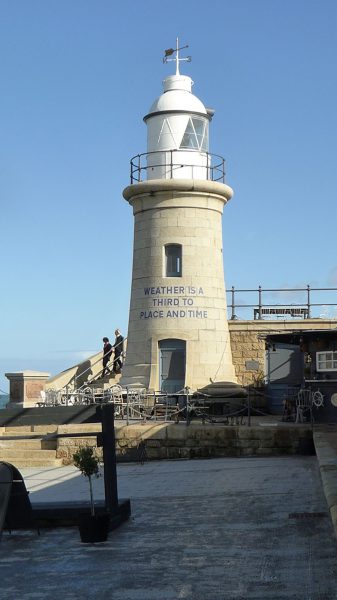 Wandering back along the harbour arm we venture onto the disused platform of the railway station. This is such an evocative place, the sweeping platform conjuring up images of its past. This afternoon it is just the two of us and the dogs, but we stop and think about all those who have passed through here previously, whether it was to go off to war or at the other extreme the glamour of an exotic trip on the Orient Express. 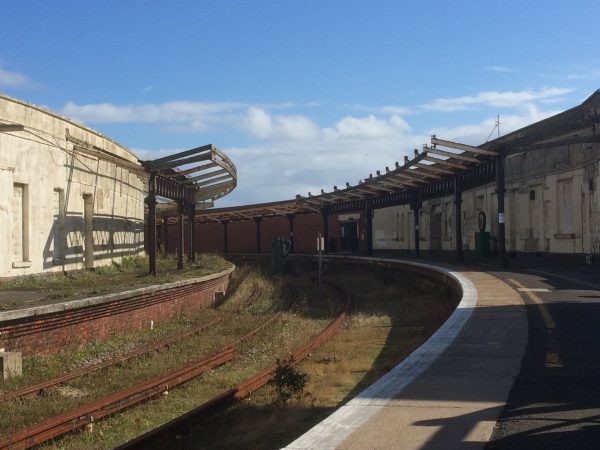 We could spend more time here but are keen to explore the rest of Folkestone so wander around the harbour until we reach a bronze “The Folkestone Mermaid” produced by Cornelia Parker in 2011. Fifty local women applied to be the model for the statue and Georgina Baker was chosen to be immortalised and placed on the harbour wall. 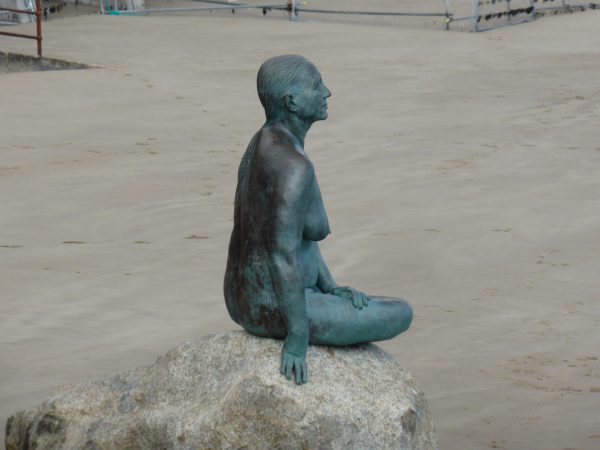 Our initial intention was to carry on along the coast, but work on the sea wall has made this impossible so we walk back and climb up a narrow street crammed with interesting bespoke shops. We are in Folkestone’s Creative Quarter home to a thriving collection of studios and businesses, clearly there is a thriving arts and crafts movement here. We are then in the main shopping streets and even on a quiet afternoon it is not to our liking so we head back towards the sea front.

We find ourselves at the end of the Leas Promenade. Now this is more to our liking. It is said to be a unique cliff top promenade; created by Lord Radnor in the late 19th century and designed by Decimus Burton who also worked on buildings and gardens at London Zoo and Kew Gardens.

There is just so much to see here. One of the first things grabbing our attention is the memorial plaques, to local people, located behind seats. The one that catches my eye is to Walter Tull; born in Folkestone in 1888 he became the second black professional footballer in the Football League. In 1914 at the outset of World War I he quit football to join the army and despite a bar on black soldiers becoming officers he was promoted to the officer ranks. He was killed in action in 1918.

Further along the Leas we reach the magnificent, now almost derelict building of the Leas Pavilion first opened in 1902. Despite looking small from the outside it has a large hall that was used as a tearoom and theatre until 1984 when it became a pub and entertainment venue until closing in 2007. There is currently a campaign by the local community to raise the funds to restore it to its former glory. 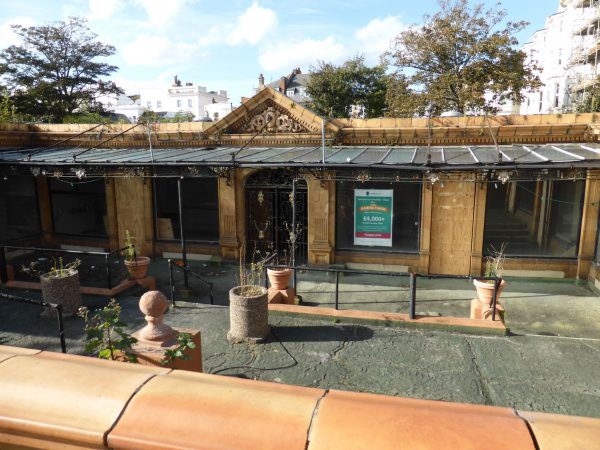 Next up we arrive at a statue of William Harvey (1578 – 1657), on the plinth is a plaque presented by the British Medical Association. I have not previously heard of Harvey, but a quick search reveals he was a renowned physician and is credited with discovering the role that valves play in the circulation of the blood around the body. 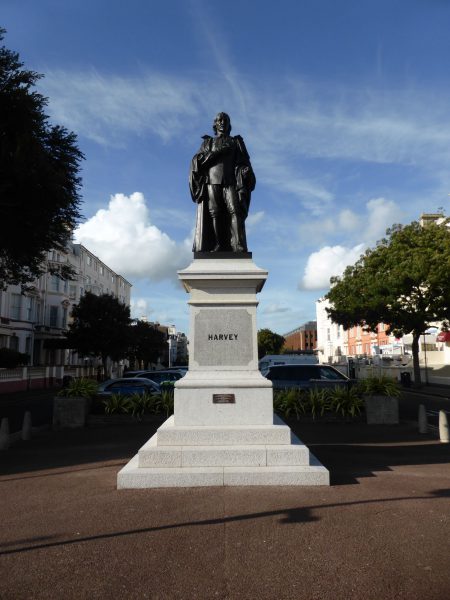 We stop briefly to look at the bandstand before continuing on our way. As we walk along the promenade we try to imagine this place in its heyday. It must have been spectacular. Up in front loom two impressive buildings, which we assume to be hotels, we try to guess their names. Lynnie hits the jackpot with The Grand and The Metropole. 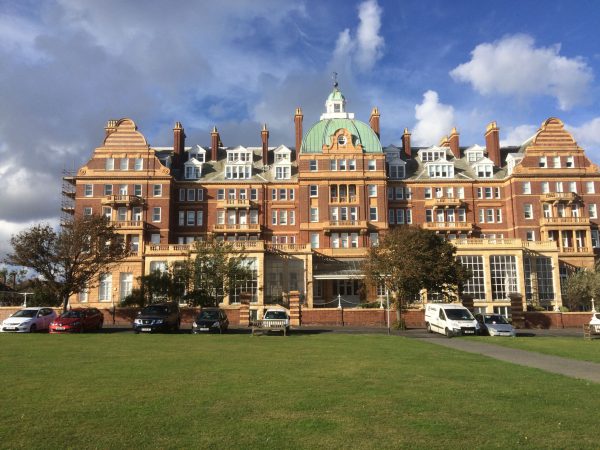 These two buildings have a fascinating history. The Hotel Metropole opened in 1896 and was built to a high standard with all the trappings you would expect of a quality, luxury hotel. It is now private apartments. 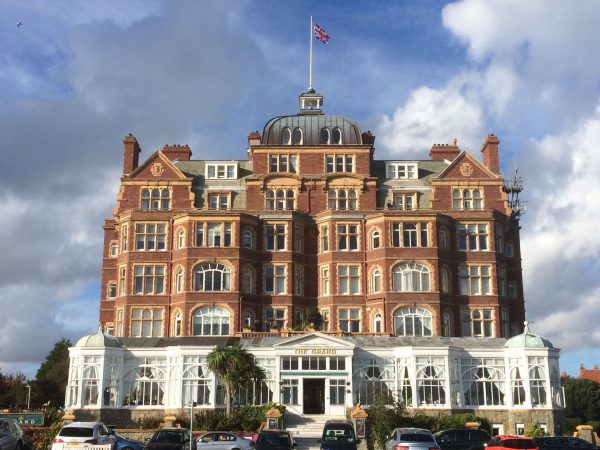 Whereas The Grand was built in 1899 originally as gentlemen’s residential chambers, but converted to a suite hotel in 1903. Interestingly it was built by Daniel Baker, a local builder, who had missed out on the contract to build the Metropole next door. He decided to build an even more impressive building. He was the developer of cavity ties and in The Grand included waterproof cavity wall insulation. His masterstroke was to use steel frames enabling the huge glass frontage that maximized the view and the light.

The Grand was a favourite location of King Edward VII; he visited with the Queen but also used it for assignations with his mistress Alice Keppel.  Agatha Christie is said to have written Murder on the Orient Express in one of the hotel suites.

As we near the end of the Leas we take a footpath leading down a series of paths and steps to the Lower Coastal Path. This was the path we started on and we turn right to wander back to Sandgate.

We have spent hours ambling just over six miles and it has been absolutely fascinating. We could have spent much longer in Folkestone and will return. This blog has barely scratched the surface, if I were to recount all the interesting things we saw today I would be writing a book rather than a blog!

The more we see of this area the more we like it. We already know we will be returning as we won’t see everything we want to see in this area in the time remaining.