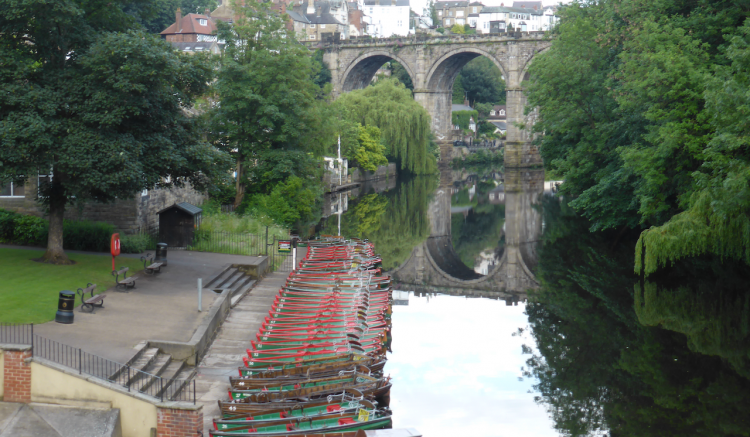 It is in trepidation that I open my eyes this morning. Did I have a terrible dream? Did the EU referendum really result in a vote to leave the EU? All too soon we realise it was true and once again start the day with a serious bout of melancholy.   There is only one thing to do and that is get the boots on and go for a good long walk.

One place on Lynnie’s wish list to visit whilst here is Harrogate. I have spotted a good circular walk around the Town which I hope will provide opportunities to look at some of the fine buildings, whilst Lynnie has ideas of visiting Betty’s tearoom.

Years ago I attended a conference in Harrogate and remember it as an attractive place but apart from that I have little recollection. Being a circular route there are many spots to start from but we choose a car park just over the River Nidd in Knaresborough.

Again we park the car for a modest fee, I have spent less in parking for a week in this area than I would for a day in Salisbury. No wonder my home city has a declining city centre. We leave the car park and cross the bridge (High Bridge) and then immediately turn right. Opposite us is the entrance to Mother Shipton’s Cave, but more of that later.

We are walking with the River Nidd on our right so going anti-clockwise around the twenty-mile route that is known as the Harrogate Ringway. Very soon we see a plaque dedicating the cycle way (which is shared with the footpath on this section) to Beryl Burton OBE. The plaque says that Beryl was 7 times world cycling champion. 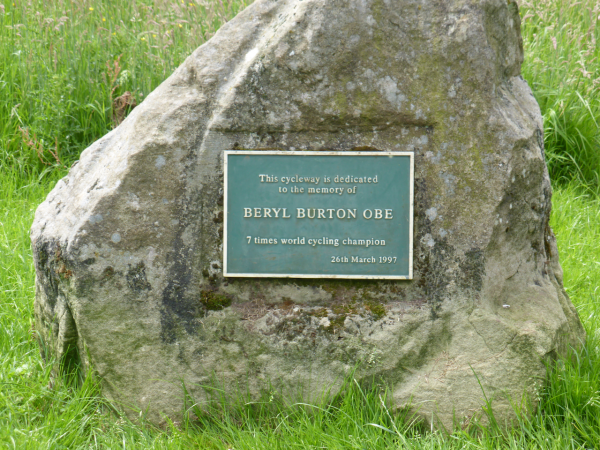 This doesn’t really do credit to Beryl’s achievements, nor could I possibly here. Beryl was born in 1937 and as a child spent 15 months in hospital recovering from rheumatic fever. She took up cycling at the age of twenty and went on to dominate women’s cycling, between 1959 and 1973 winning world championship medals in individual pursuits twelve times (5 golds, 3 silvers and four bronzes). The list of her honours is long! She amazingly won the Road Time Trials Council’s British Best All Rounder for 25 consecutive years between 1959 and 1983.

The record that astounds me is that in 1967 she set a new 12 hour time trial record by covering 277.25 miles, on the way she passed Mike McNamara who set a new men’s record of 276.52 miles on that day. The alert amongst you will have noted that Beryl’s women’s record was further than the men’s record. It was another two years before a man went further. To borrow a phrase from my favourite Yorkshire man, Maurice Wilkinson, “unbelievable”! What is more unbelievable is that she was only awarded an OBE, these days she would surely have been made a Dame. 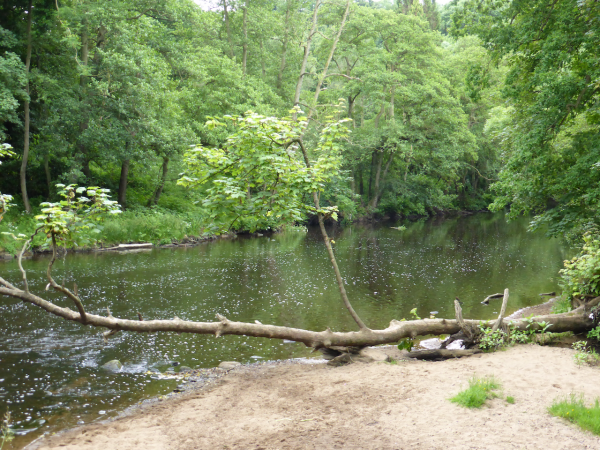 One of the reasons I love travelling, and blogging, is that you discover things that you really should know about this country and its amazing people. Our route soon leaves the River Nidd and follows a clearly marked path on Bilton Lane (a track) we follow the way markers and turn right to head through woodland and are soon back besides the Nidd.

This is stunning walking, we have been close to the River Nidd on a number of walks, here it is a slow moving broad river. A wonderful place to be on a warm, sunny day. After a couple of miles we arrive at the Nidd Viaduct apparently built in 1848 it is 104 feet above the river. The viaduct carried trains on the Leeds Northern Railway between Leeds and Northallerton passing through Ripon. The route was closed to passengers in1967 and freight in 1969. 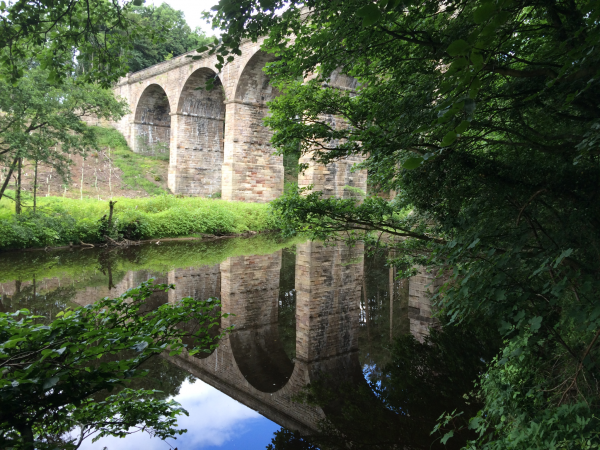 Our route soon diverts away from the river as it passes around the sewage works. Lynnie comments that many of our walks seem to take in a view of the local sewage works! If you walk close to rivers you are bound to encounter one soon, however much we like to avoid the subject it is an essential part of maintaining a civilized society.

We now find ourselves in a residential area on the outskirts of Bilton but before too long we are heading out into more rural surroundings. We are still following the waymarkers for the Harrogate Ringway and this leads us down to the idyllic hamlet of Knox, with the cracking packhorse Spruisty Bridge. 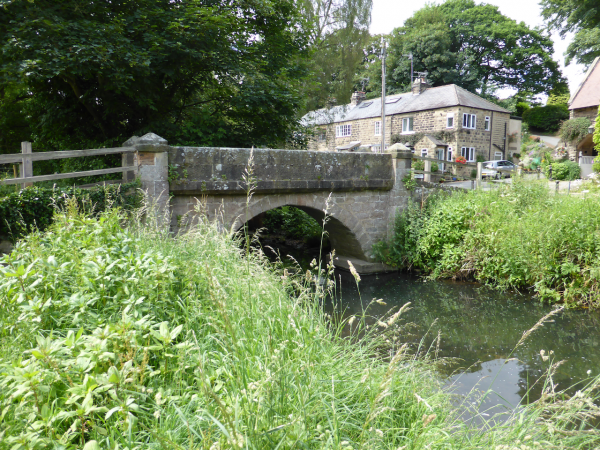 A plaque states this is a17th Century Bridge that carried packhorse traffic between Ripley and Knaresborough and at one time was the main route across Oak Beck a tributary of the River Nidd.

Over the bridge we turn left and follow the tarmac drive to the busy A61, which we cross with caution. This track takes us towards Grange Farm and then we cross the A59 joining a path opposite taking us through another housing development.

This is not the most scenic part of our walk, but we follow the waymarkers and soon find ourselves close to Oak Beck, briefly leaving the beck to skirt around the clubhouse of Oakdale Golf Club and then we are back in woodland close to the beck. 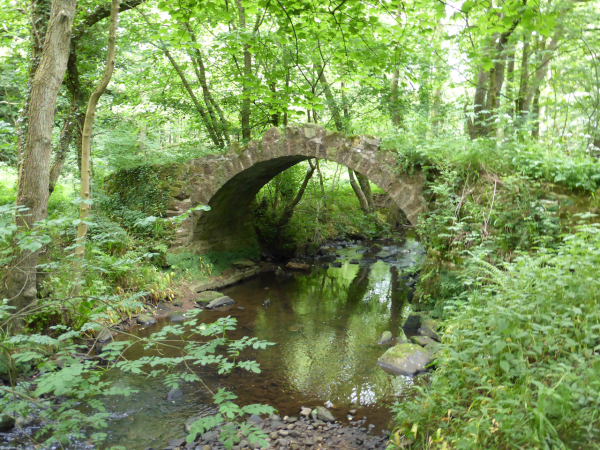 After close on half a mile the route climbs steeply away form the beck and enters a smart residential area on reaching a minor road we turn left uphill and follow the route through Birk Crag. The route is now high above Oak Beck and soon follows a track with one side being the high fence that marks the boundary of the Royal Horticultural Society Gardens at Harlow Carr.

On reaching the B6162 we turn left and soon cross to follow the road that leads in front of the Police Headquarters. This is a huge building; I conclude there must be a lot of crime in this area. The day has changed the sky is now a dark, purpley colour and it feels as if a storm is imminent. Suddenly there are loud rumbles of thunder in the distance. We are probably at our furthest point from the car and look at the map to work out a short cut if need be. 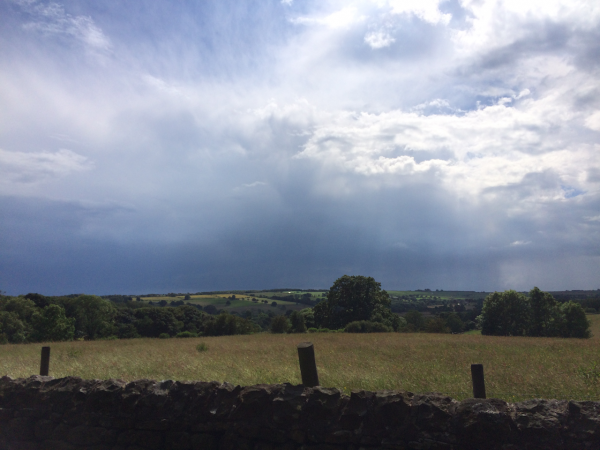 At a cross roads we go straight ahead toward Beckwith and then cross a couple of fields to join Lady Lane, the Harrogate Ringway now enters a field of young bears so we decide to follow the road downhill towards Daw Cross and at a T-junction turn right to head downhill to a bridge over Crimple Beck. Just after the bridge we turn left rejoining the footpath to Pannal.

On reaching a road we turn left following it briefly before turning right by a church and are soon in open countryside again. The thunder is closer and louder and there is moisture in the air so we prepare ourselves for the impending deluge. 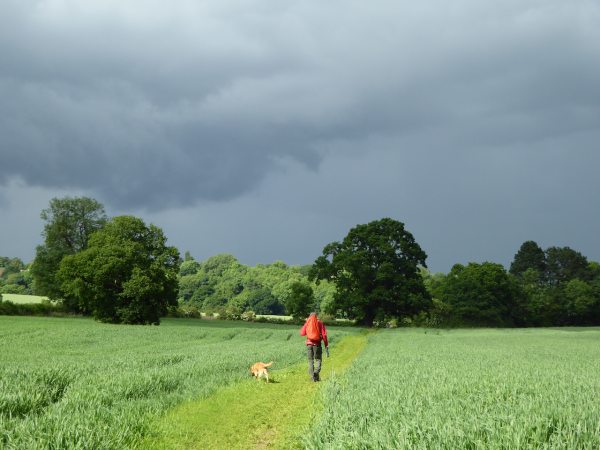 On reaching the A61 we decide to abandon the openness of the circular route and head into Harrogate and the relative safety of the urban development. Walking in open countryside is not a good idea with thunder and lightening about.

We leave the A61 by turning left into Fulwith Mill Lane; this is an area full of very desirable properties. We are now briefly back on the Ringway but leave it at a junction of paths to veer left up besides Oatlands Community School. On reaching a road we turn right to walk past Hornbeam Park Station and then take a left and follow our sense of direction to get to a wide green space known as The Stray or Two Hundred Acres.

After a brief excursion to see if we are near the centre of Harrogate we are back crossing another section of The Stray and soon join the A59 heading back towards Knaresborough. There now follows over two miles of wet walking besides a busy main road through residential and commercial areas. Not what I had planned for the day!

However along the way there is a bit of a gem. Going through Starbeck we pass Starbeck Hall, the plaque by the gate says that it was built in 1810-11 to contain paupers formerly sent from Pannal at an annual cost to the Town of £5per head. It was in use until 1858 when it closed after a new workhouse was built in Stockwell Road, Knaresborough. Apparently the guardians of the workhouse ran a regime that discouraged idleness, by means of austerity, discipline and work. I trust this is not what those voting for an exit from the EU were seeking when they said that they sought a return to old values and wanted their country back! 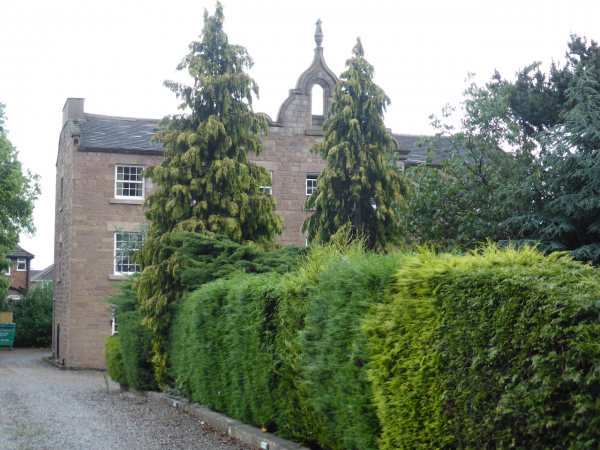 Eventually we are back at High Bridge spanning the River Nidd, but before returning to the car we stop at the entry gates to Mother Shipton’s Cave. I thought that Lynnie and I had visited here, but she insists that we have not. I came as a nipper and can still remember it vividly. In fact I still have nightmares about the experience! 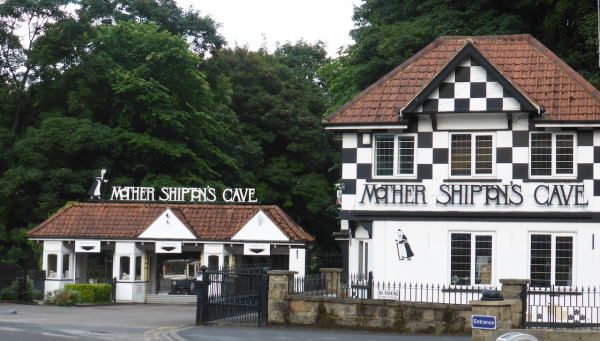 When I came here there was no fancy website to tell the story, but now you can read it all online. Mother Shipton, or to give her her real name Ursula Southeil, was born in 1488 and according to legend was born during a violent thunderstorm in a cave by the River Nidd. (Probably a day like today!).

Ursula’s mother Agatha was fifteen years old and refused to reveal the identity of the father. Mother and daughter lived for a couple of years in a cave before a local family took in Ursula. She grew up around Knaresborough and because of her deformities, a long nose (something that many of us have!) bent back and twisted legs she was viewed to be witch like. This was reinforced by her ability to make herbal remedies and predict the future. At the age of 24 she married a local carpenter Tobias Shipton, he died a couple of years later. Despite being known as Mother Shipton she had no children. She died in 1561 aged 73.

The caves claim to be England’s oldest tourist attraction opening in 1630. Close to the cave is the petrifying well, the combination of the cave with the model of the hideous witch and the objects around the petrifying well created images in the mind of a young Fred that will probably never leave me. 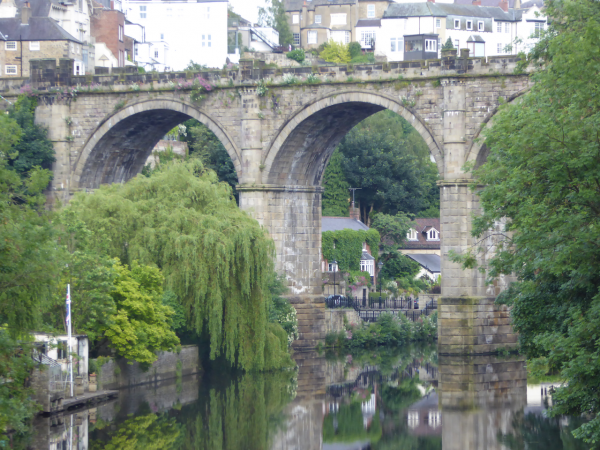 The rain has now stopped so we pause on the bridge to look at the Nidd below us. It is a picture of serenity with rowing boats moored up for the night. It has been an interesting walk, though we have not seen much of central Harrogate or been anywhere near Betty’s tearoom. Our planned route was curtailed but we have still covered close to eighteen miles.

On the way back to West Lees Farm CL we agree that we must visit Harrogate again, but next time we will spend more time in the town itself. 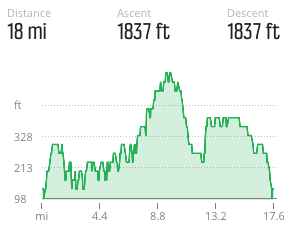