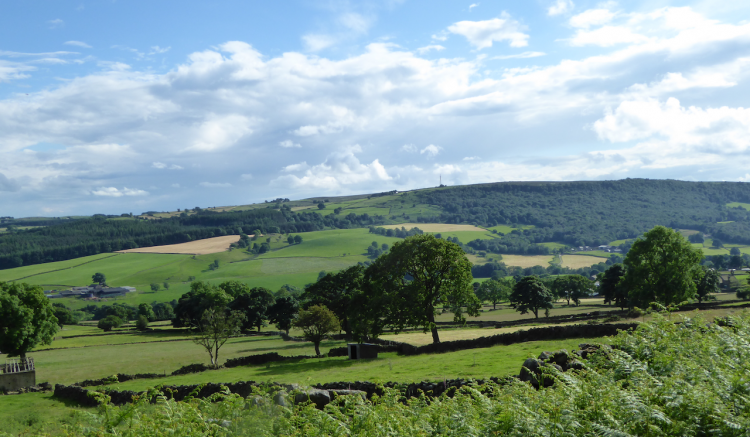 We wake up to a bright and sunny morning at West Lees Farm CL. We are thoroughly enjoying our stay in Nidderdale and looking forward to heading out to explore around Pateley Bridge. What could possibly happen to spoil such a cracking day in wonderful surroundings?

It’s at this point that we catch up with the news; we are in utter shock at the outcome of the EU Referendum. I immediately start looking at houses in Scotland and we try to rationalise the outcome. But we can’t. After a couple of hours of sheer melancholy we decide that we should go for a walk to see if things feel better when we are out.

Unfortunately our drive from Kirkby Malzeard to Pateley Bridge appears to take us right through “Leave” country and the frequent billboards in fields urging people to vote leave are a constant reminder to the predicament that we, as a country, are now in.

We both fail to see why the electorate would vote “Out” when so many people, with far greater knowledge than Lynnie or I, were saying that the country’s best option was to remain in the EU. I suppose this is why Winston Churchill once said, “The best argument against democracy is a five-minute conversation with the average voter”! 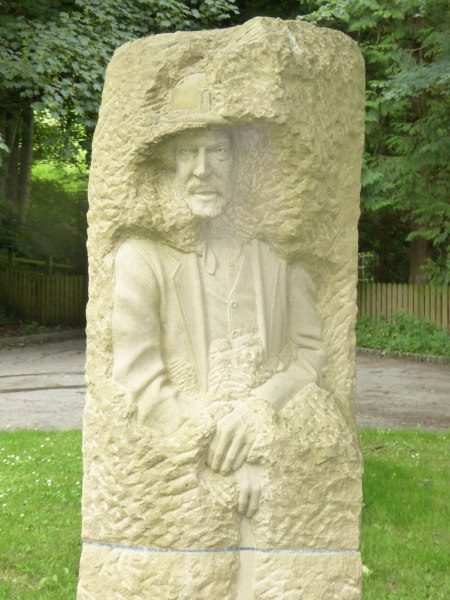 We soon spot some interesting sculptures on our left and walk up a few steps to have a look. 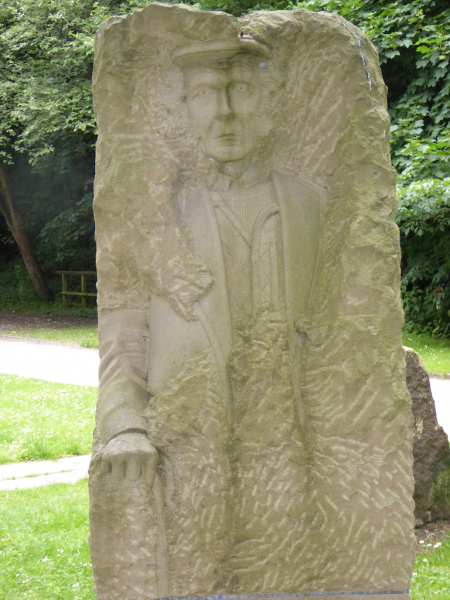 This is known as Pillars Past and was created by the local sculpture Joseph Hayton to represent the history of Nidderdale and is located at the site of the old railway turntable for the now disused Nidd Valley Railway. 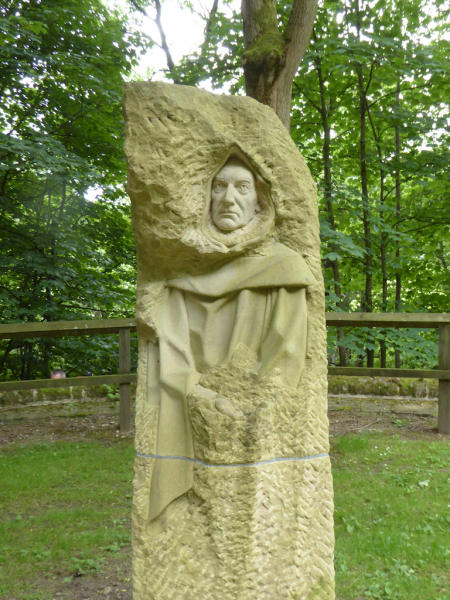 Back on the footpath we continue alongside the river until we reach Glasshouses where we meet a road, here we turn right and cross the river and then immediately join a footpath on the south side of the River Nidd. On the opposite bank is the disused Glasshouses Mill. Planning consent to redevelop the old corn and flax mill has recently been granted, so it should soon be turned into smart apartments. 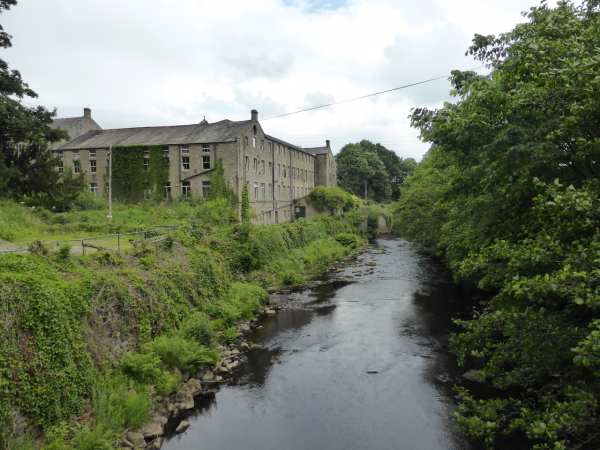 This is an easy path to follow; we just keep the river on our left and ignore any paths leading away from it. The route takes us under a former railway bridge that spanned the River Nidd. 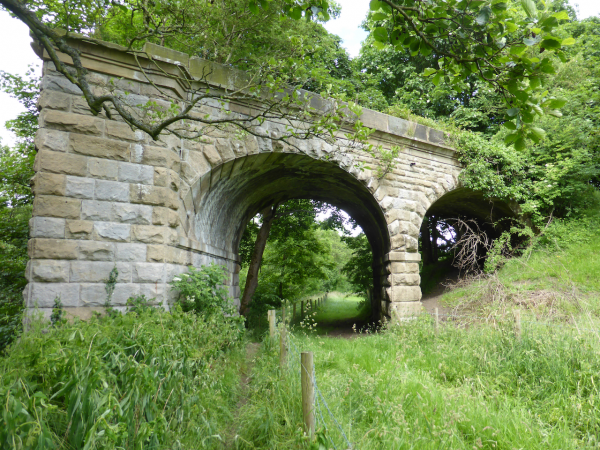 The Nidd Valley Railway opened in 1862 and ran for 14 miles from the Nidd Junction, on the Harrogate to Ripon Line, to Pateley Bridge. Passenger services on the line ceased in 1951 and goods trains stopped in 1964.

A few hundred yards after passing under the bridge we take a footbridge across the river and continue to walk on the north bank. After about quarter of a mile the path veers away from the river and soon crosses a field to reach a road (B6165). We cross and take the footpath opposite that follows a track to Little Mill.

On reaching a minor road we turn left to cross a bridge over Fell Beck and then turn right at a footpath sign to skirt the boundary of a house before the path picks up a route above the Fell Beck, (once again we are on the Nidderdale Way). This gradually descends closer to the beck. There are a wonderful array of ferns and mosses all around the beck. Today the water level is low, but after heavy rain the beck must be a spectacular sight. 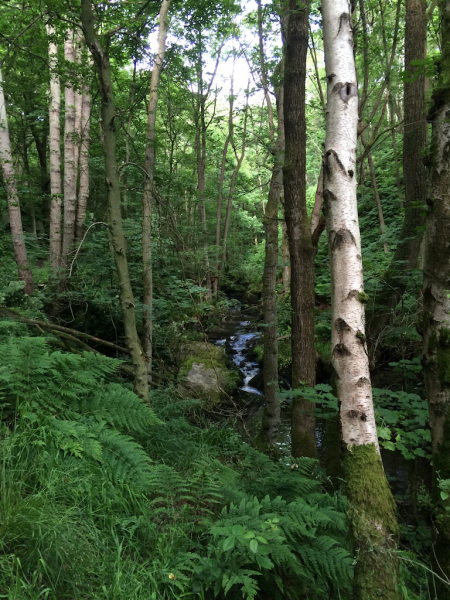 The route is not particularly well waymarked, but the it is well used and relatively easy to follow. On reaching Mill House we turn away from the beck and follow the Nidderdale Way waymarkers across a couple of fields to arrive at a path besides a terrace of farm cottages. This leads to a track where we turn left continuing on the Nidderdale Way, which from here is well marked, and leads back to Pateley Bridge.

In the distance across the valley we can see RAF Menwith Hill (and they can probably hear us!). This site provides communications and intelligence support to the UK and US. The site was originally acquired in 1954 and during the ‘Cold War’ was key to monitoring the communications from the Soviet Union. 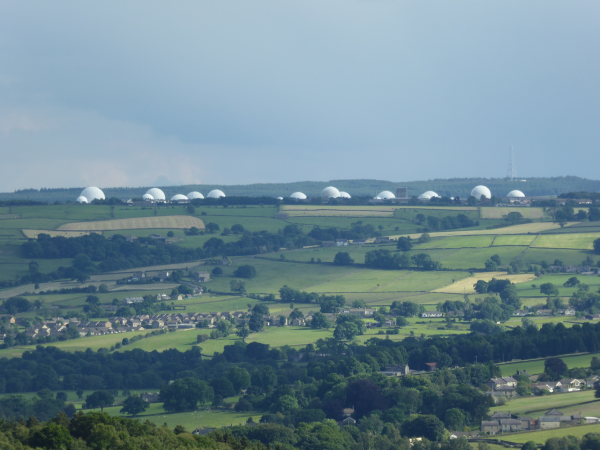 Occasionally our path meets a minor road and we follow the waymarkers that keep us almost straight ahead. On reaching the B6265 the route goes downhill besides the road and then picks up a track on the right. The fingerpost and waymarkers were lying in the undergrowth so initially we were unsure of the way. But once uncovered they confirm we are heading the right way.

This section of the walk is known as the Panoramic Walk, as you would expect from the name it provides some wonderful views. 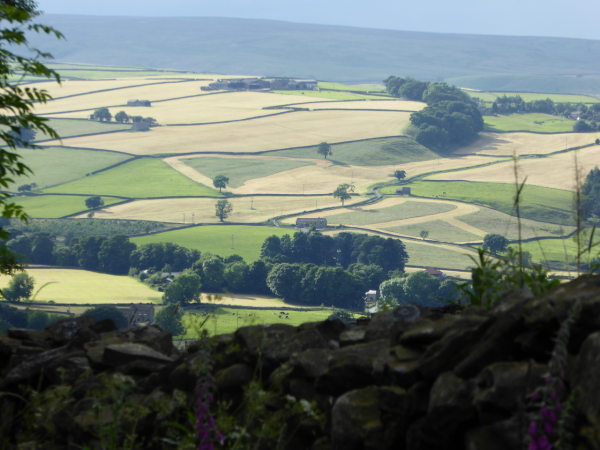 We are soon back in Pateley Bridge and after a bit of exploring in the town head back to the car. Our walk has covered just over seven miles. Another relatively short walk by our standards but at least it has got us out for the day. Unusually most our walk has been conducted in silence. It’s not that we have fallen out with each other, more that we are still in total shock about the referendum and cannot think of anything else. Perhaps if we have a couple of gins tonight we might wake up and discover it was all a bad dream. 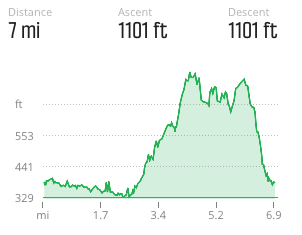