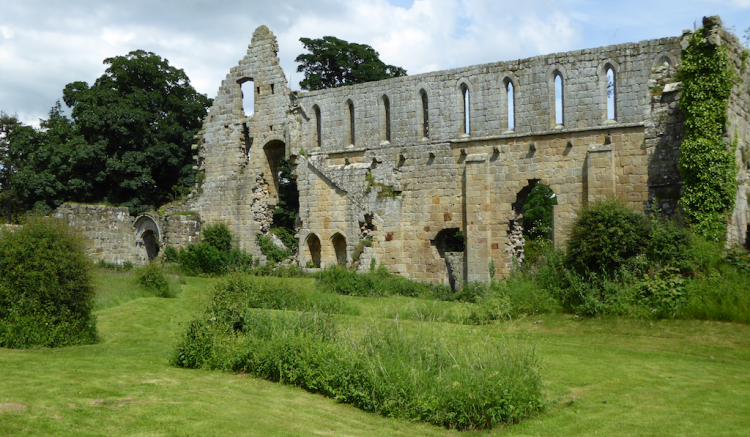 I would have great difficulty in picking my favourite Yorkshire Dale. There are so many to choose from and they have many different features and when they are all so great why pick one or two out as favourites? Last year we stayed close to Richmond and explored Swaledale, which was stunning, now we are really enjoying Nidderdale and in the past, mainly when the children were small, we spent time in the western end of Wensleydale.

Today our trip out is to explore a part of Wensleydale that we have not previously visited. We are off to visit Jervaulx Abbey and will make it the start and finish of a circular walk. It is a pleasant drive from West Lees Farm CL, through Masham to reach the car park by the Jervaulx Abbey tearooms.

The tearooms are busy, they get great reviews for their cake, but we will have to walk first in order to earn a treat. We cross the road and enter the grounds of Jervaulx Park and head for the Abbey. 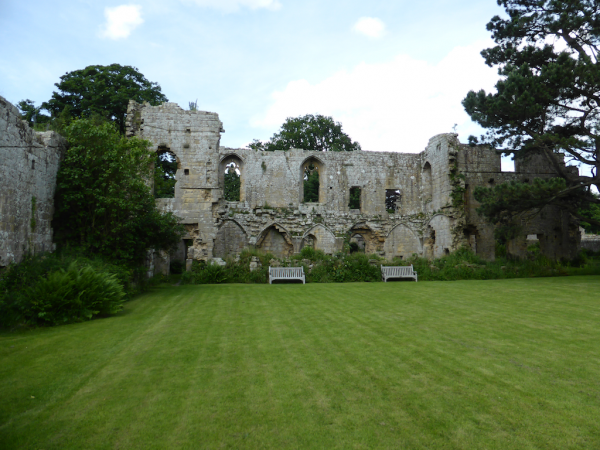 The Abbey is privately owned and works on an honesty box system. We deposit our entrance fee and wander around. 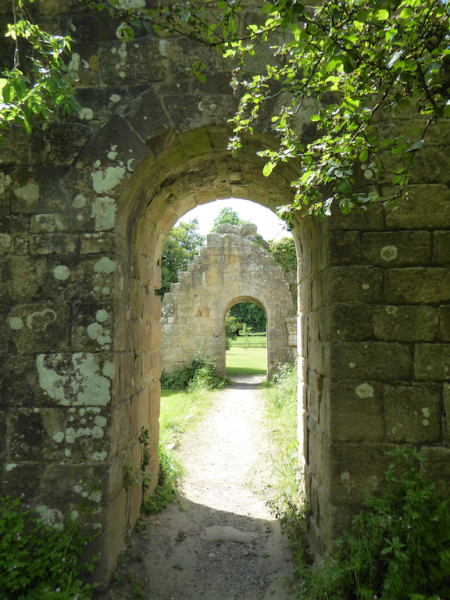 The Abbey website tells the history of the place, so there is little point in me repeating it all here. In summary it was originally founded in 1146 by a Cistercian Monk called Peter Quintain on land eight miles to the west, close to Askrigg and was known as Abbey of Fors, but after six years they moved to the present site which was considered to be more hospitable.

The Abbey thrived at Jervaulx until Henry VIII and the dissolution of the monasteries, thereafter it fell into disrepair. In the early 1800’s Thomas Brudenell Bruce, Earl of Ailesbury discovered the site and set about clearing it. 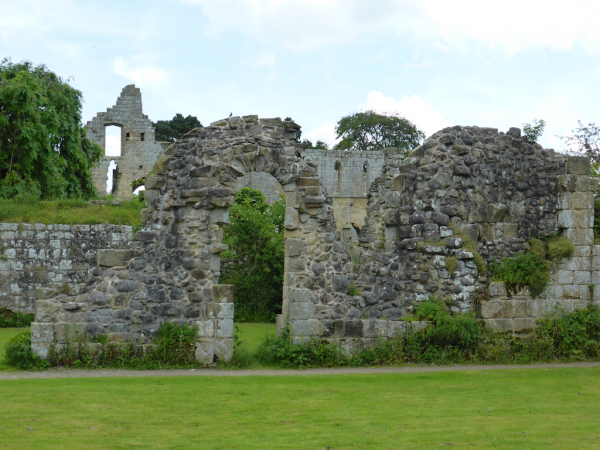 It then passed through the hands of various private owners whilst being maintained and it is credit to the current owners that it is such an amazing and tranquil place to visit. 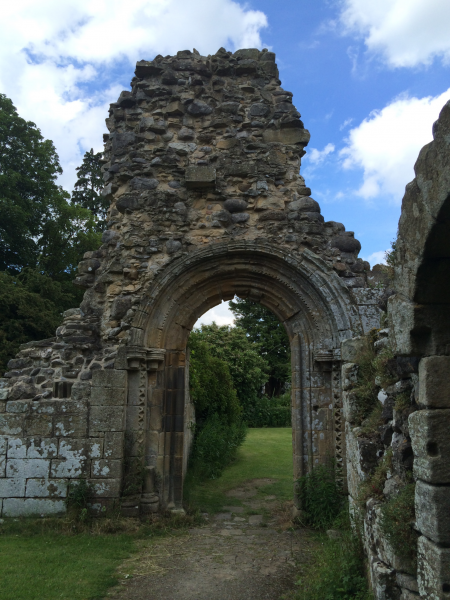 We wander around and eventually settle on a bench for our picnic before somewhat reluctantly heading off for a walk. It is such a relaxing place we could spend all afternoon here. 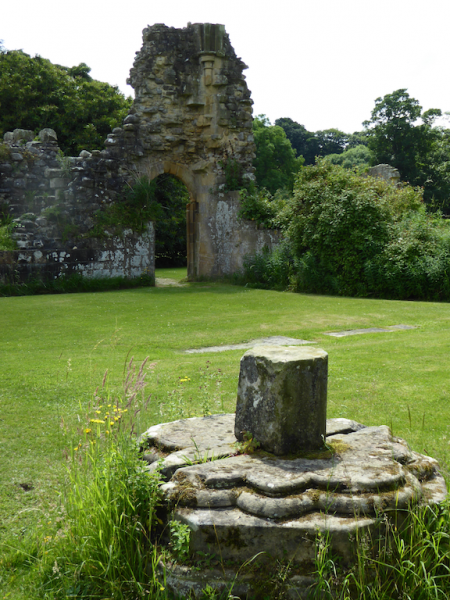 Leaving the Abbey grounds we head across Jervaulx Park on the footpath towards Jervaulx Hall. This soon brings us to the main road (A6108), which we follow for a few hundred yards. Mostly this is fine because there is a wide verge but there are a couple of short sections where caution is required.

After crossing Harker Beck we take a footpath on our right leading down to the banks of the broad River Ure. We are now on the Six Dales Trail. This is a 38-mile walk from Otley to Middleham passing through Wharfedale, Washburndale, Nidderdale, Colsterdale, Coverdale and Wensleydale.

Unfortunately we are only covering a few miles of the trail today, but it is one to consider for the future. It is pleasant walking close to the river and the feet of walkers and fishermen have ensured that it is not too overgrown. 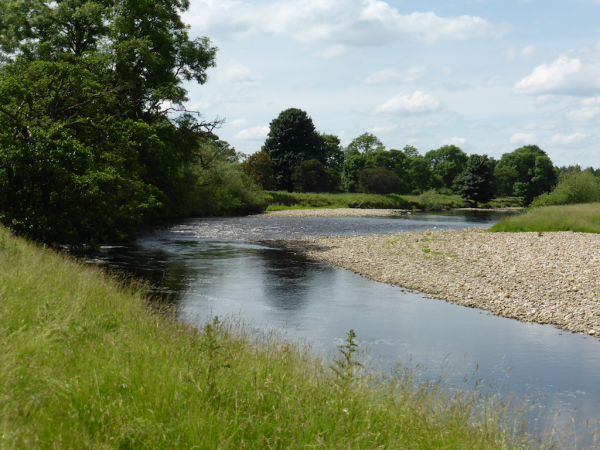 On arriving at Cover Bridge we cross the road and pick up the path on the other side,leaving the Six Dales Trail and following a footpath that soon leaves the river to cross a couple of fields and climb steadily towards East Witton. 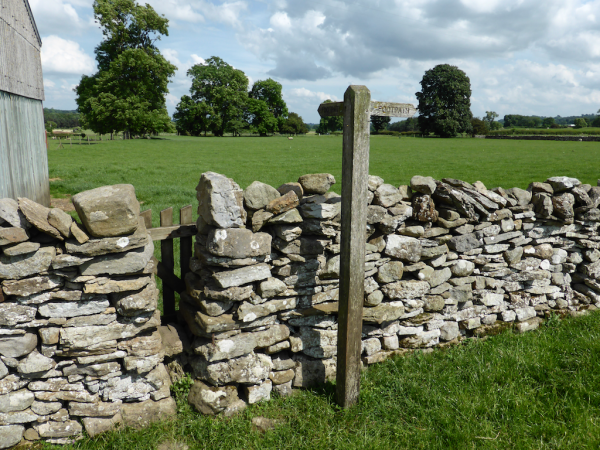 This is a pretty village, which appears to be asleep. We do not see a soul as we walk down through the village. Apparently Richard Whitely, famed for presenting Countdown, lived in the village and is buried in the churchyard. 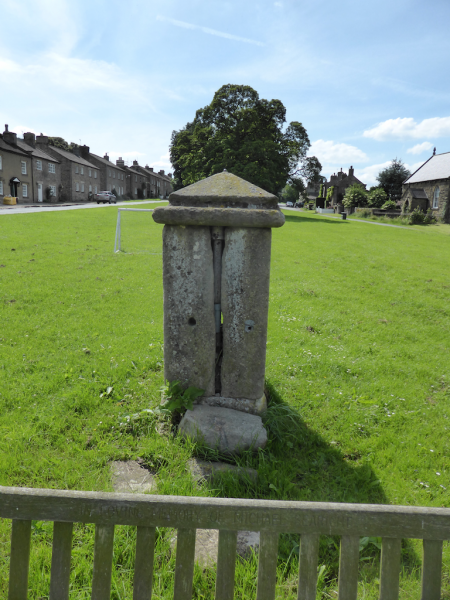 The first folk we see are an old lady being assisted into the Polling Station to cast her vote in the EU Referendum. Earlier we had received a message from our proxy that our votes had been cast according to our wishes. We turn right at a crossroads and follow a lane (Low Thorpe) that briefly runs parallel to the main road, we have good views of the fine church on the opposite side of the main road. 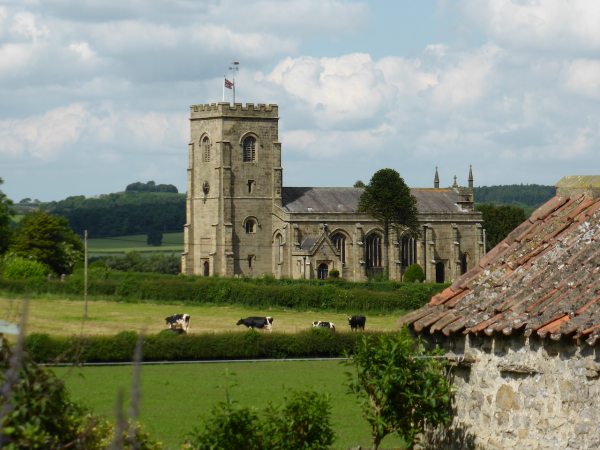 This is the church of St John the Evangelist and was built in 1809 to replace the now ruined church of St Martin. It was certainly built to house a large congregation. Our route continues through the yard of Waterloo Farm and then continues as a track uphill towards Hammer Farm.

Walking up the hill we initially discuss the potential implications of the electorate deciding that Britain should leave the EU. We find it too depressing to contemplate so soon move on to considering how attendance numbers at churches must have changed dramatically since the early 1800’s.

At Hammer Farm signs invite us to take an alternative route to avoid walking through the farmyard. It is only a short diversion and means we avoid a field of young bears so it is most welcome. Now our discussion moves onto the merits of diverting footpaths and what might be considered to be a reasonable alternative route.

We conclude that going a few hundred yards from a traditional footpath is a reasonable request. If I owned a remote property I wouldn’t want folk tramping through my garden if I could provide a reasonable alternative. What is not acceptable; is when the footpath is just blocked or the alternative route takes you miles out of your way and includes a treacherous stretch of road. (I am still bitter about experiences in Devon earlier this year when a river footbridge had obviously been unusable for a long time and the alternative route was besides a very busy road!) 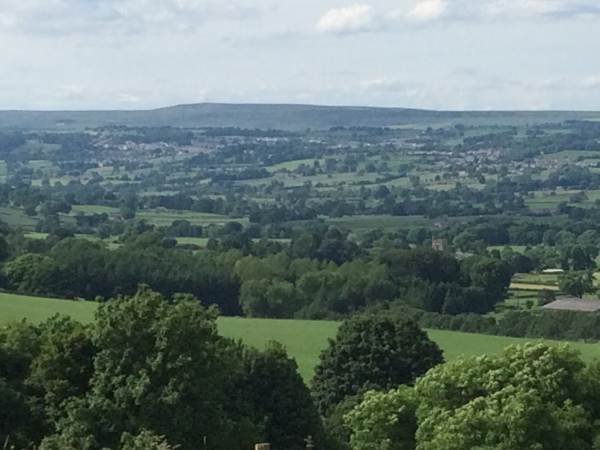 From Hammer Farm we walk along Hammer Road (which is the farm track). Our original plan was to carry on walking for a few more miles before returning to Jervaulx Abbey. However, the hot weather and side effects from the antihistamine are sapping my energy and when I suggest to Lynnie that we up the pace and take a shorter route to try and get to the Abbey tearooms before they close she is off like Usain Bolt.

At the junction of Hammer Lane and Stark Bank Road we turn left and follow this lane downhill. It turns into Newstead Lane as it sweeps to the right. At a junction with the A6108 we turn left and head downhill to the Abbey car park. The tearoom is just about to close but we manage to purchase a welcome pot of tea before they finally shut up shop.

Todays walk has covered just over six miles and has been a very pleasant stroll on a warm afternoon. It is time to head back to the Coachman and enjoy the sun set with the hope that tomorrow brings good news about the EU referendum. 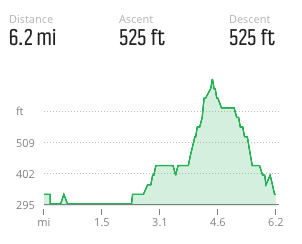