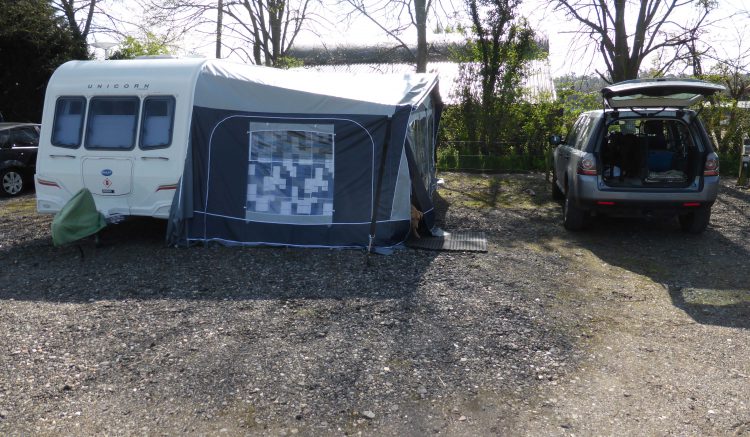 Up early, as it’s moving day. Out with the dogs for a brisk stroll and then back to the van to prepare for departure. In my teens I suffered from migraines, but thankfully they stopped. Then in my late forties they returned. I wish I knew why and what the trigger was, but when they come they render me useless for an hour or so and thereafter I have a thumping headache. Perhaps it was the thought of doing battle with the awning, but for some reason today is a day that is to be blighted by a migraine.

After a spell with my head under the covers I start to feel vaguely normal again. Lyn would have a comment or two on what normal is in Fred’s world, but on my scale we are in the functioning quarter of the normal scale.

There is something that I try to avoid after a migraine and that’s bending down. So taking the pegs out of the awning was a proper delight, (we are on a hard standing so not a task that can be delegated). Then it’s time to focus on battling with the awning. This morning it’s Fred one, Awning nil, but I know that this is like a Fairs Cup Tie, another memory from when I was a lad, and that it’s a two legged affair. So whilst feeling confident I know that the awning will have observed my tactics and be ready for the fight in a few hours time.

So we depart Farnham, we have been staying on Coxbridge Farm CL, pictured above. It is very convenient for Farnham Town centre and good for local walks. The site itself is not the most picturesque, but has some good views. We did not actually see anyone from the site during our stay and in their absence we relied on fellow caravanners to point us in the direction of all the essentials. However, it served a purpose and if in the area again we would use it for a night or two.

Heading south we are off to Dorset, the county of Lyn’s birth and childhood. It feels like we are going on holiday! We arrive, connect to electric and water and then have a cup of tea in the sun. We both know what is coming and the awning has been relaxing it the warmth so is fully flexed for the fight. Fully refreshed we catch it unawares and in a calm relaxed (almost) manner it goes up without a hitch. Fred two, Awning nil. Now that’s what I call a result!

I take the dogs for an evening stroll around Beacon Hill and then in celebration of victory over the awning I pop into the Holme Bush for a sharpner before dinner.