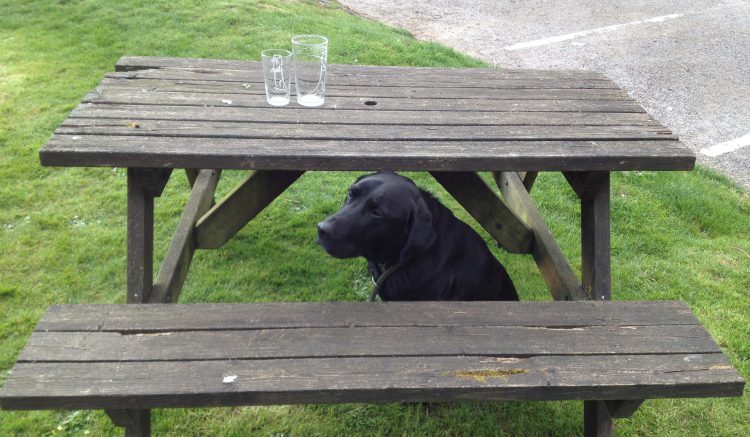 Crosby gives us an early morning alarm call, the sun is up and he wants to be out to sniff the spring air. There is no way that Lyn is venturing from the comfort of her bed, so map in hand and boots on off we go at 6.45.

Walking from the site along one of the farm tracks we soon join a footpath. Over a couple of fields and along a lane and we pick up the St Swithun’s way. Passing a number of seriously large properties we meander our way back to Farnham entering the town at the top of the hill by the Castle.

Walking by the Castle you do not get any impression of the splendor of the construction. A couple of years ago I attended a meeting in the conference facilities there but even then you get no sense of the shell keep that is a key feature. Built in 1138 by Henri de Blois, grandson of William the Conqueror the castle was the home of Bishops of Winchester for over 800 years. It was the residence of Cardinal Henry Beaufort who presided over the trial of Joan of Arc in 1414.

We have had a cracking early morning stroll, we’ve been out for two and a half hours, covering over five miles, and back at the van Lyn appears to have missed us. Not a lot, but enough to know that we are welcome home.

When Lyn and I first met we were both working in Surrey and spent enjoyable afternoons wandering in and around Shere. So being a bit of an old romantic it seemed right to return to this area again.

We park at Shere Heath and walk south, soon crossing the railway line and onto Pond Lane and then into Winterfold Wood stopping for a sandwich on Justice James’ Seat at Reynards Hill. During his legal career Justice James held a number of significant legal positions including junior counsel to; HM Treasury in Equity, the Inland Revenue, the Metropolitans Board of Works and Woods and Forest Department. In 1853 he became Queens Council. When he sat on his seat he would, I am sure, have had a splendid view. However, the saplings around the hill have grown to such an extent that we can only wonder what he would have seen. I think a call to the Woods and Forestry Department is called for.

Whilst picnicking we have a conversation with a local. She explains that a rose and balloon tied to a tree have been placed there by a local mother who’s teenage son lost his life a number of years ago when he was a passenger in a car accident on the road that runs by the hill. In reflective mood we continue our walk. Back through the woods we rejoin Pond Lane and return to the car, we have clocked up another three hours.

Driving back we see a signpost for Hascombe. In our early days together we used to occasionally lunch in Hascombe and have not been back since. So indicating left, off we go down memory lane.

Not surprisingly The White Horse has changed, Lyn tells me that the washing machine in the ladies is no longer there, but many of the original features remain. Amazingly this is the first pub we have been in since we set off on tour! Over a well kept pint of Otter Ale, a favourite of ours from our time in Taunton, we remember the past. Where have all those years gone?

Drinks finished we are ready to go. Well most of us are ready. Dexter likes a trip to the pub, it goes back to his socialising training when he was a pup. He is firmly of the opinion that having entered a licensed premises, or beer garden, it is rude to leave after just one drink. Eventually, with a promise of a biscuit, we persuade him that it really is time to leave.