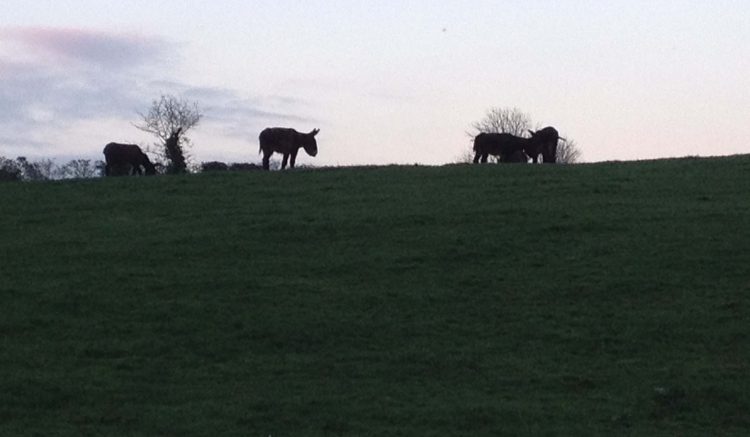 After the trauma of wrestling the awning the previous day, Wednesday is a day for catching up. An appointment takes us back to Salisbury and this provides the opportunity to jettison more excess baggage. We pop back to Pitton, Dexter and Crosby are taken for a familiar walk and to Crosby’s delight the brace of partridges that he was stalking a couple of weeks ago are awaiting his arrival. Dexter quickly learnt that once a partridge, or pheasant, is airborne there is no point in expending further energy. The younger Crosby still thinks that if he chases for fifty yards his efforts will be rewarded.

Thursday finds me making a trip to London to attend a meeting. So an early morning walk for the dogs and then I am off for a brisk walk to the station. It is four weeks since I was last on a train and I have not missed it at all. Lyn and the dogs have a day relaxing around the caravan.

Returning in time for an evening stroll into Farnham, an architecturally interesting town with a plethora of shops, including many of the national chains but still a number of local enterprises and an extraordinary number of pubs. I propose that we might imbibe, but the Unit Police determine that the implementation of their vigilant policy of reducing my intake of ale means that we will not experience this pleasure.

On the way back to the Unicorn we spot a plaque on the outside of a building that announces that ‘John Henry Knight’s car, one of Britain’s earliest petrol driven vehicles was built here by George Parfitt at the Elliot Reliance Works in 1895’.

Knight was a wealthy engineer, landowner and inventor. On 17th September 1895 he drove his vehicle through Farnham and was then prosecuted for using a locomotive without a license or having a person walking in front with a red flag. He was a founder member of the Automobile Association and politically active in the repeal of the Red Flag Act. Having had a look on Google Maps at our route to our site in Somerset in a few weeks time I can see the attraction in having Lyn walking in front of the Freelander waving a Red Flag.

Knight’s list of inventions is also interesting and include; a steam powered hop digger, a heat saving radiator, a brick laying machine, a grenade thrower, a speedometer, wooden vehicle tyres, and a patent ‘dish lever’ for tilting plates when carving meat. Presumably he acquired his wealth from being a landowner and not his inventions.

Whilst Lyn prepares our evening meal the boys and I take a stroll along the farm track and spy the Donkey’s that we have heard braying occasionally since our arrival. The sight of Donkeys always reminds me of a joke I used to tell, it was a particular favourite of Jack Judd, my godfather. I only had to start the first line and tears of laughter would start to run down his cheeks.