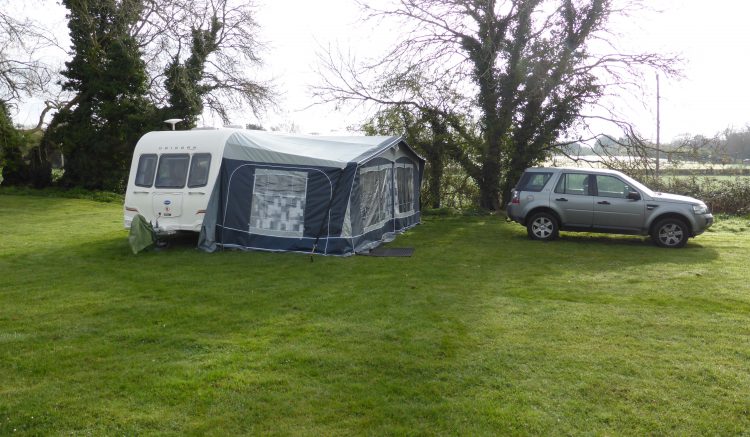 We awake early on the first moving day of our tour. The sun is up and it looks like it’s going to be a cracking day. The boys are eager to get out and enjoy the early morning sun. The site we have been on for the last week has a small paddock where they have been able to run around. In a big field there is no problem getting either to run but in a relatively confined space it calls for a couple of tennis balls.

However today, whilst Lyn packs, the boys and I are off for a pre-breakfast run in Eartham Woods, a five minute drive from here. We walk through the beech trees in dappled sunlight listening to bird song, it is a magical start to the day. We bump into a couple of horse riders out for a hack, but apart from that not a soul. The boys have a good run and sniff, we return to the Unicorn suitably prepared for the day ahead.

Now I know that there will be good days and bad days whilst we are on tour. In my plans everyday was going to be sunny, full of walking and as the day drew to a close I would be wrapping my laughing gear around a couple of pints of local ale. I had not scheduled this day into my plans.

Some people have bad hair days. We had a bad awning day. The blessed thing did not come down as planned, but that was only the half of it. Trying to re-erect the blighter in a stiff breeze was very challenging. Canvas flapping, poles going in all directions and certain, unprintable, words were uttered, but eventually it was up and looked okay. A lesson was learnt, not to try and put it up in a hurry, especially in the slightest bit of wind.

Our first week has been great, it felt like a holiday. The small Caravan Club CL we were on, Robertie Lee at Chichester, had everything required, electric, water and waste disposal. Mary the site owner is very friendly. She has a couple of Collie’s she uses for agility competitions, she was telling me that at one time she had seven. I love dogs, but there would no chance of me ever owning seven!

Sadly after thirty years Mary is leaving the CL to move to a property locally with less land. A pity because her approach to running the site was perfect. Available to answer questions and check that everything was okay, but not intrusive. Hopefully the next owners will adopt the same approach.

In planning our travels we have sought areas of the country that we have not previously visited, with a few notable exceptions. It is just over an hour from home to Chichester or the South Downs, not somewhere that I had previously thought of visiting. This week has tempted us to return, for longer next time and hopefully with the sun out.

As if to prove the point as we drive past Trundle Hill towing the Unicorn, the sun shines brightly and according to Lyn the views are fantastic. My focus is firmly on the road ahead and ensuring the Unicorn is still behind us.