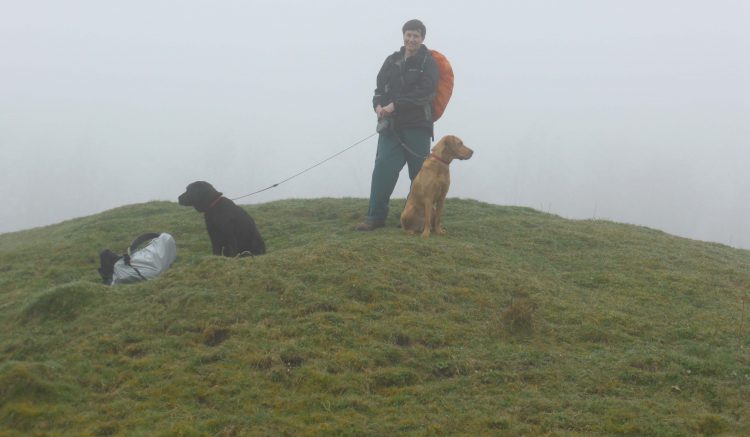 Crosby is two today. So he gets to choose what we do for the day! Not surprisingly he wants to go for a long walk. Lyn’s not so keen, but reluctantly agrees to join her three boys. So the picnic is prepared, whilst I do the daily check of the awning and do all the other outside jobs.

We park at the Hilltop car park near Cocking. A clue to the type of walk we are in for is in the name of the car park. Joining the South Downs Way we head westward into the low cloud that has encased the downs. I bet there would be cracking views on a clear day. After passing a group of youngsters on a Duke of Edinburgh walk we come to Devils Jump.

Devil’s Jump is a group of five bronze age burial mounds (barrows). The information board explains that the alignment of the barrows appears to be orientated to the setting of the sun on Midsummer Day. Now that’s a job you would want to get right first time, imagine the hassle if having put the fifth mound in place they discovered it was out of alignment.

The cloud is so low that it is only possible to see two mounds at any one time. Lyn and the boys climb to the top of one to try and get a better view. Crosby keeps a constant eye on the gate to see if someone is going to arrive with a biscuit. After all it is his birthday! 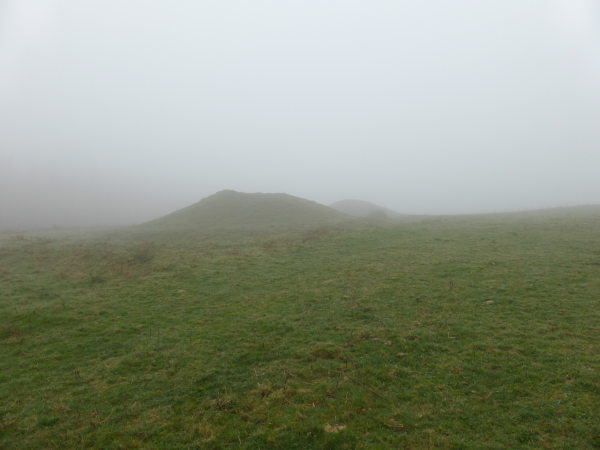 Leaving the South Downs path we head downwards and shortly walk, trudge in Lyn’s case, through a field in a valley. Nothing remarkable about this until you reach the gate at the bottom and discover that we have just passed through the medieval settlement of Old Monkton. The settlement belonged to the monks of Waverley Abbey in the thirteen century and was populated until the seventeenth century. Speculation is that either the Enclosure of land or the plague led to the settlement being abandoned. Personally I think it had something to do with waiting for the electricity supply to reach them, if they had waited they could have had a line right through the village! 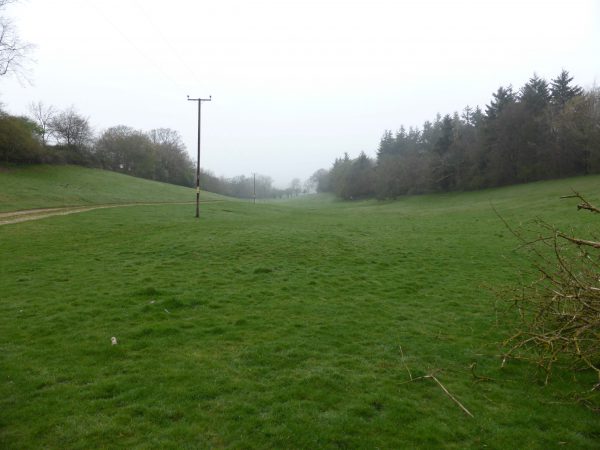 We then bump into a couple of “twitchers” or “birders” as they like to be called. They appear to be father and son, one in his seventies one forties. Every couple of steps they stop and survey the trees and hedgerow. I once walked with a work colleague who was a twitcher, never again will I walk with someone with binoculars around their neck. What should have taken ninety minutes took almost three hours!

We had been watching the Red Kite circling the lambing ewes. Mainly living off carrion these birds are not interested in the lambs. In the past these beautiful birds were shot by farmers and gamekeepers, in the 16th century they were classed as vermin and by the late 18th century had been eradicated from England. Now reintroduced they are prevalent in some areas, our daughter Lolly lives near High Wycombe where you see flocks of them. In Wiltshire they are still uncommon, so the opportunity to see one up close is a real treat.

We climb up through Westdean Woods, passing the Woodland Trust’s nature reserve, time to stop for a picnic. Crosby thinks that he deserves a bit of sausage out of my sandwich and his face adopts that “how can you deny me a taste” look.

Now the path takes a steep climb, good training for when we get to Yorkshire in June and will be going up Ingleborough. We are back in the cloud and soon rejoin the South Downs Way back to the car. A very enjoyable three and a half hours covering almost eight miles.

Back at the Unicorn and both dogs are damp. There is only one thing worse than a damp Labrador and that’s two damp Labradors!

When we told a good friend of our travel plans. He said he could see the attraction of travelling but was not sure about taking dogs. “What about the smell?” he asked. “They will soon get used to it” I replied. As they say the old ones are the best.

All in all Crosby appears to have enjoyed his birthday. 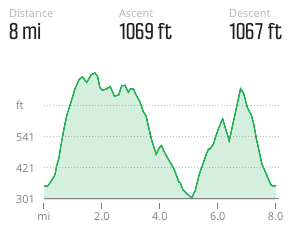